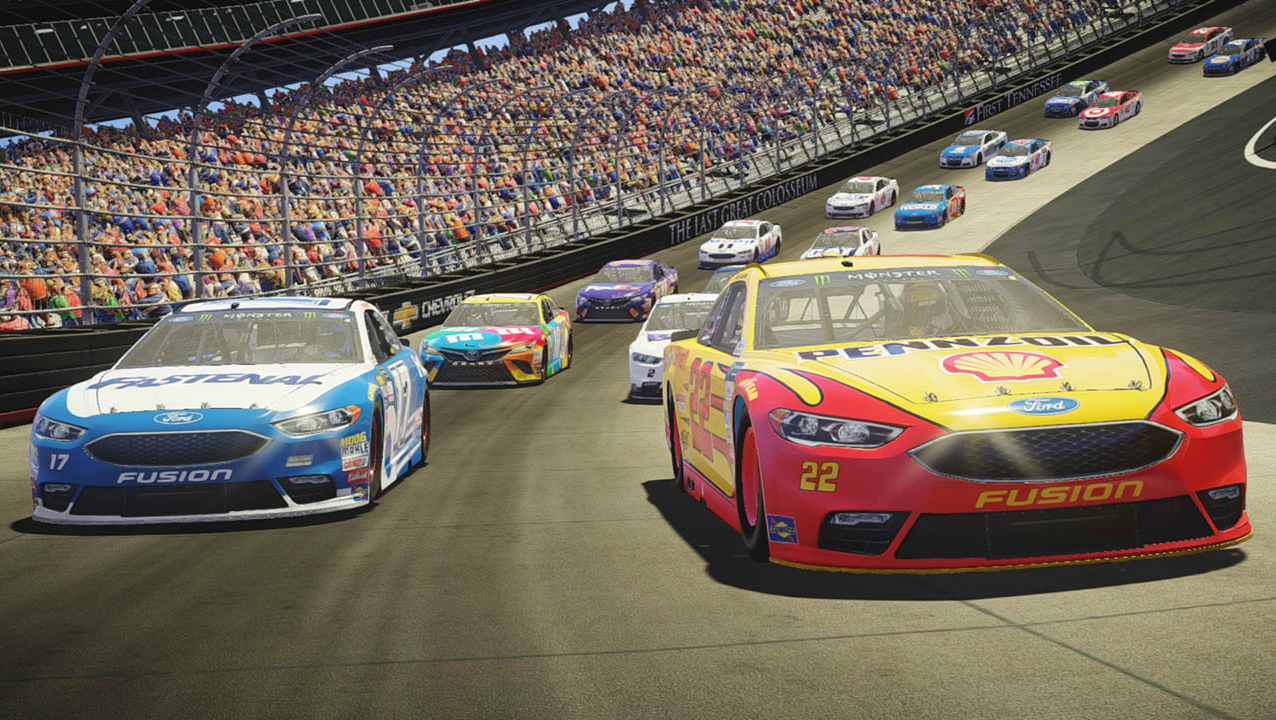 Nothing will ever make NASCAR interesting despite the sport’s constant change. Crashes are violent and mesmerizing, but lack diversity. The races often fail to be compelling despite featuring futuristic race cars travelling at near absurd speeds. As the sport changes rules for the season, and the individual races become multi-stage events, a realistic feeling NASCAR experience in video game form would do wonders for the popularity of the sport.

Unfortunately, NASCAR Heat 2 is about as far away from a credible NASCAR experience as can be, and feels like an overnight experiment in attempting to further discredit an already flatlining sport. Despite the gloss and shine on the cars and the scenery, there are a litany of problems and cheap exploits in this massively disappointing sophomore effort.

NASCAR racing, particularly on the “super speedway” style tracks, has a complexity in the way the cars cluster up that doesn’t come along with other racing games. NASCAR Heat 2 is just the latest bad attempt in a long line of failures to capture this complexity. A stability assist feature is designed to give you more control while in the scrum. It effectively turns your car into an invincible wrecking machine.

This feature is definitely the most broken of all the broken accidents in this game. Stability control can allow you to wreck the other drivers while maintaining your own stability. This will trigger “caution flags”, which stops the race, and freezes you in the current place you’re in when the caution flag drops. Each restart means you’ll be brought right back up with the cars in front of you, and you can easily wreck your way to 1st place.

If you don’t cheat the system like that, you’ll still find yourself wrecking all the time even with the stability help. Turn it off and all hell breaks loose, but it is a lot more interesting and you’ll find yourself in control a bit more, as it feels better since you make your own way around the track. Either way, don’t expect much in the way of smooth racing or fun, and don’t fret over the numerous crashes and violent events, because all that happens is you’ll be placed back in line with little to no repercussions.

Full damage on, no stability control, and on the highest difficulty, I attempted to get in a big wreck to see what would occur. I got what I wanted in spectacular fashion, flipping my car a dozen times and flying comically high in the air, so high that there is a less than zero percent chance a human could survive. I came out unscathed, sustained only aerodynamic damage to the car, and MOVED UP 4 SPOTS. As unintentionally hilarious as that was, I wanted to delete the game from my hard drive and the very sport from the Earth in this moment.

The game does offer a ton of tracks and features all three major racing series from the sport, including the truck series. This is probably the most interesting and fun mode of the game, as the trucks handle a lot differently. Each series has some tracks that others do not feature, and for whatever reason the game doesn’t allow you to run a race on an out-of-series track. Such a simple thing could have been a nice addition, but instead it is just another glaring mistake.

Despite this, I like that there are some courses you would never have gotten to race in a NASCAR game now featured, including a Canadian road course and a magnificently fun dirt course, both features of the truck series. The dirt course race is so much fun that honestly it feels like it’s part of entirely different game, sort of like a really nice walk-in closet that opens up to hell.

This is compounded by the fact that NASCAR Heat Evolution, its predecessor, had done a fairly passable job of making the races feel smooth and completable. NASCAR Heat 2 changes so much about what made the first one enjoyable, from the ultra reliable controls to the generally competent AI, the game almost feels like a shell of its former self. A red shell, or some banana peels, might be the only thing that could salvage this snooze fest of a game.

NASCAR Heat 2, the series for that matter, would actually work so much better as an arcade game instead of this pseudo-simulator nonsense that we have today. Arcade style would work with the wonky controls, and damage to the vehicles could be comically over-the-top visually without being too damaging to the cars themselves and not feel cheap. Arcade style play would also be able to take better advantage of action scenarios such as wrecks and the last few laps of each race.

The problem with that is that NASCAR wants to have a game available for their adult fanbase. This is the first NASCAR game I’ve seen that includes the alcohol and gambling advertisements in full, rather than being cheesily replaced with knock-off logos typically bearing the driver’s name.

Despite this, Brad Keselowski still has this cheesy knock-off option available, presumably for kids whose parents are totally fine with their child watching a light beer commercial round a track for 3 hours each Sunday but don’t want them to see that same ad when they play this game. The keyword though is option.

Having acknowledged that alcohol does exist even in the video game world, NASCAR Heat 2 takes a second brave step towards being a NASCAR game for adults by attempting to capture the pure essence of the racing as opposed to a cartoon version and falls well short.

Negativity aside for a brief moment, the graphics of NASCAR Heat 2 are actually beautiful. I love the way the cars look in different lighting and shadow. The sky and the cars play on each other to great effect, and this really is the best part of the game. I loved being under the lights of a track, or just seeing the sun go down on the race as you wind through the Watkins Glen road course.

But the courses themselves, while definitely accurate to their real-world counterparts, are pretty lazily put together, and the trees in the road courses are laughably low resolution. They look like they came from a PlayStation version of NASCAR Thunder. Also fairly comically, if you stop dead in a place where you can see up into the stands, you’ll notice that the “fans” in attendance are, collectively, a fuzzy static image, with ghostly visages blurring into one another in general attendance bliss.

This game does feature split screen local play, which was not in the first NASCAR Heat game, but with the product being so mediocre, it’s not really a big deal. You also have the option for online multiplayer, and single player in just either a single race, or a long-term season. There is an option to create your own driver and car as well.

The layout of the game menus and the visuals therein are done well, and it is easy to navigate between game modes and menus. I do not like that you have to exit through several screens when you cancel a race, instead of it taking you just back to the start. Visually the menus are fine, but I didn’t particularly find the soundtrack appealing. The songs sound generic, working well as background music but not adding any quality content to the game overall.

NASCAR Heat 2 is a huge disappointment and massive collapse of the promise given by the decent predecessor, NASCAR Heat Evolution. The game’s controls are loose and worse than ever, and the problems of the first, including some patently stupid glitches and exploits, are still fully present. The game looks fine, but it does not play well at all, and represents what may be a sign that NASCAR just won’t ever translate well to the video game world.

Patrick Rost has been with Gaming Trend since 2013. At first focused on sports coverage, Patrick has gone on to cover a wide range of games and other products for the website. Outside of Gaming Trend, Patrick writes and records music, grinds perpetually in Elder Scrolls Online (PS4), and lives day to day with his two dogs, Bob and Stella.
Related Articles: NASCAR Heat 2
Share
Tweet
Share
Submit