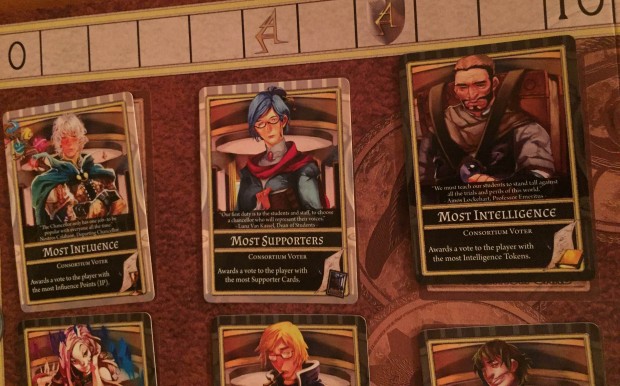 Chancellor Nostros Calahaan shocked us all by announcing that he will resign in one week. This is the moment I’ve been waiting for. I think it’s clear that I’m the best possible successor out there. This gives me just enough time to impress the Consortium voters. Wait, what? It’s a secret Consortium? Well, I guess my agents and I have some work to do…

Argent: The Consortium is a massive worker placement game set in Level 99 Games’ World of Indines (Pixel Tactics, BattleCon, etc). In it, players are trying to win the support of secret voters. Eight to eleven influential mages cast their votes at the end of the game to the player who impressed them the most (maybe by having the most of a certain resource, or maybe by having the most representation within a certain school of magic). The thing is, all but two of these voters will be hidden. Players will have to spend actions trying to figure out the whims of the Consortium voters.

Some of the Consortium voters.

Each round players take turns performing one action at a time until the players have removed all of the bell tower cards. The actions include placing any mage, casting any spell, using a vault card, or taking a bell tower offering card. In order to place a mage, players place one of the mages they selected at the beginning of the game on a spot of the game board (with some exceptions). Mages represent students of different schools of magic with different effects based on their affiliated school (color). For example, red mages can wound another mage, sending that mage to the infirmary, and take their spot; green mages cannot be wounded; grey mages can be placed in immediately after the controlling player casts a spell, meaning that player can essentially perform two actions. Players will place mages in order to get the resources, supporters, items, etc, listed on the tile space at the end of the round. In order to cast a spell, a player will “tap” a spell card they previously acquired, pay its mana cost, and carry out its effect. These spells might grant a player more actions, let a player break the mage placement rules, or do just about about anything else. In order to use a vault card, a player will put an item card they previously acquired into their personal discard pile and use that game-changing effect. In order to take a bell tower offering card, a player takes one of the remaining bell tower cards, collects its bonus, and brings the round a little closer to finishing.

Once all the bell tower cards have been taken, players will resolve the room tiles on which they placed their mages, one-by-one, spot-by-spot. Most of these spots will grant a player some resource, but some may give that player access to new powerful cards or grant them the opportunity to peek at Consortium voters. At the end of the fifth round, players flip the Consortium voters and reward them based on the preferences of the voters. In the case of a tie, influence at the university (one of the game’s many resources) breaks the tie. Whoever has the most votes wins.

The rooms with some mages ready to collect their rewards.

Like most of Level 99 Games’ games, Argent: The Consortium gives you an overwhelming amount of content. In most games having a lot of content and replay value is a good thing. However, in Argent: The Consortium the amount of content in the box is excessive. It is simply overwhelming for a first time player to open up the box, attempt to sort through everything, and set up the game. On top of that, many of the components are double sided, including the different mage workers, the player character sheets, and the room tiles. This means that every game will be different, but players have to relearn a good chunk of the game every time they play. Also, this game just takes up a lot of table space.

Compounded with this excessive amount of components is the fact that this game is simply hard to wrap your mind around. It is difficult to balance the six different types of resources in the game (seven if you include the marks which let players peek at Consortium voters). It is difficult to balance all of these factors. Although the idea of figuring out what the Consortium voters want is very novel and interesting, players have no direction in this game during their first playthrough, The resources balance well together, but I think the game could have been simplified without sacrificing strategic depth. I do worry that influence (one of the main resources) may be too important in comparison to the other resources: one voter will always favor the player with the most influence, and influence is a tie breaker for all Consortium voters. Moreover, enough influence grants players merit players, allowing them to do the most powerful actions on each tile.

I’ve come to realize that as a gamer, I tend to prefer elegant designs with simple rulesets that open up to vast strategies. Argent: The Consortium is not elegant. This means that this is not a game for me. While there was a lot I enjoyed about this game, for me the inelegant gameplay was not worth it. However, I can see this game appealing to a lot of people.

If you are looking for a heavy worker placement and do not mind getting over the initial learning curve, you should consider Argent: The Consortium. First of all, the theme is incredibly strong, which is rare of any worker placement game. It is fun learning spells, unlocking higher levels of spells, and casting them. Between the different mages, spells, items, and supporters, players will be capable of radically different things making you all feel like different wizards. Second, I love when the workers in worker placement games are not all the same. In this game, players are not just worried about where and when they place mages, but also which mages they place. Third, the player interaction is strong. Not only can players cast spells at each other and attack their mages, but they need to be cognisant of what other players are doing because those players will have seen different Consortium voters. Some of the player interaction may be too in-your-face for some players, but it is enjoyable with the right play group.

However, the best thing about Argent: The Consortium is endgame scoring. I love having to figure out what the Consortium voters want throughout the game. I hope more games adopt a similar endgame scoring. It is simply impractical to use your actions to peek at all, let alone a majority of, the Consortium voters. So, players need to guess what some of the other Consortium voters are based on the actions of the other players. This means that, once everyone knows what is going on (which, to be fair, will take at least a full game) players are highly engaged in order to gather the most information possible.

Argent: The Consortium, once you figure it out, is a rich and rewarding worker placement game with a clever theme, interesting end game scoring, and high player interaction. It will appeal to a large number of gamers. However, this is simply not a game for me. Everything from the amount of content to the resource management to the ruleset is overwhelming. A lot of people will be able to get past this learning curve, but for me it lacked the elegance I look for in games.