With a barrage of roguelite, action-platforming, run-and-gun games on the market, it’s easy to get lost in the mix. But what does it take for a game to stand out in a crowded room full of gun-toting, action-packed, frantic, games? Whatever the formula is, Veewo Games, the team behind Neon Abyss appears to have concocted the perfect elixir. Not only did Neon Abyss feel like a rush of endorphins to my brain with its bombastic gunplay, rave music, random dancing characters, and blood-splattering powerups, but it did this while not taking itself too seriously. And what’s not to love about a game that knows exactly what it is?

To draw you into this gun-blazing world, your character meets with Hades (think Neo meeting Morpheus for the first time) who convinces you that the Titan Group killed your family and took most of his disastrous powers. Drinking the blue drink that Hades pours, you find yourself falling into a ‘Sunken Place.’ The story here isn’t meant to be deep and thought provoking, but just enough to give you a reason to carry a big gun and shoot demons. 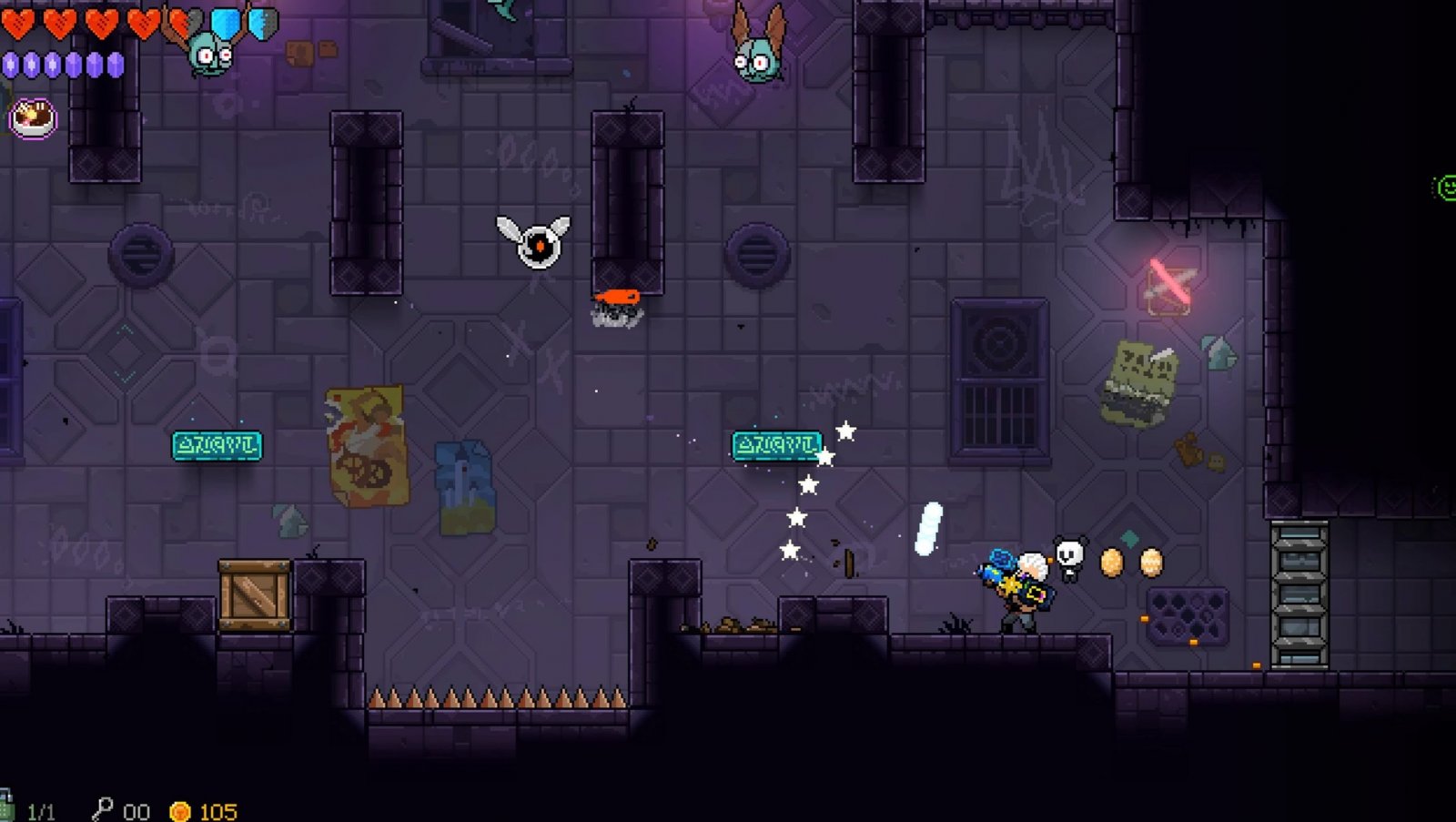 The levels are broken down into biomes that must be cleared in order to progress to the next. The first few biomes you run through are meant to help you get your bearings with the button layout and gameplay. Personally, I needed to remap my buttons because the default layout just wasn’t set up for me to quickly disperse a room full of flying and crawling demons. The biomes themselves are procedurally generated, giving each a unique feel, and giving the enemies a plethora of ways to attack. Visually, you couldn’t ask for a more fitting world. The levels are beautifully detailed and are often lit with neon faces, arrows, and lights, all tying into the theme of… whatever goes. Often, I found myself lacking the necessary items to unlock hidden or unreachable locations, but the game and its randomness makes up for that. At any time, you can use the teleportation stone found in each level to zoom back to areas that were previously inaccessible.

But all that pales in comparison to the reason this game exists. The guns in Neon Abyss and the stackable items are as random as the procedurally generated levels, which can be a gift and a curse. Each gun looks and feels unique, and they’ll change the way you approach combat. Some guns shoot a straight shot, forcing you to use your platforming skills, where some will explode on impact or fire a straight shot and then split, creating an ascending and descending shot. There is a bit of luck when it comes to gameplay because everything is random. You may get great guns, items, and grenades your first run, but won’t be so lucky the next time. And not all guns look like guns: some are cats, fish, and guitars, while others look like something from Duck Dodgers (know your history, kids). Items such as masks that grant a chance to do increased damage, a balloon that enables flights, and other randomness can be found by accessing rooms with a gold door, finding keys to unlock chests, sacrificing yourself, and using crystals to use your active item. 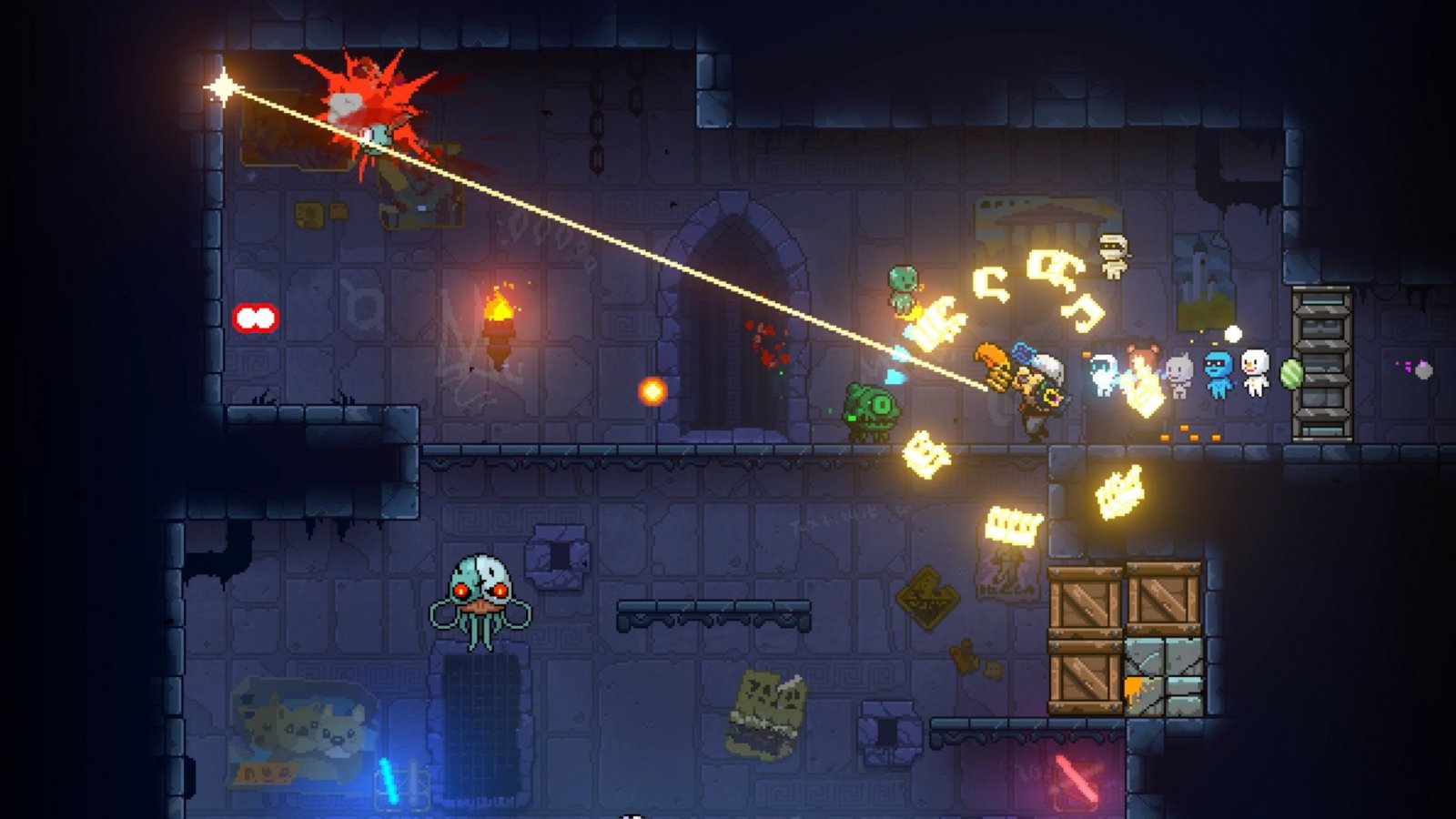 During my first playthrough, it took some time to get used to the randomness and how it all comes together. Not only that, but understanding how and if I was supposed to change active items was something that I didn’t grasp until my second playthrough. Maybe it’s the way it’s worded in the menu, but it appears you can change active items, but I couldn’t. My initial playthrough gave me guns and items that made fighting the new gods a challenge, as the gun I had and the active items in my inventory didn’t give me much of a chance. I used this playthrough simply as a learning experience to understand why and how things happen in the crazy world. After dying, I was transported to what looks to be a nightclub of the afterlife. Here, I could change characters, upgrade my characters, enter a seed (this lets you replay a level), and even dance with the party of people.

During my second playthrough, I came across a gun called The 8th Color. This gun cycles through 4 different types of projectiles, and when stacked with special items, I was an unstoppable juggernaut. This vastly changed how I managed health, cleared a room, and even defeated the new gods that Hades wanted me to take out. And in the fashion of randomness, you can pick up eggs that have a chance of hatching and acting as a helper in battle. From what I can tell, there’s no limit to the number of eggs you can have trailing behind you and helping you in battle. 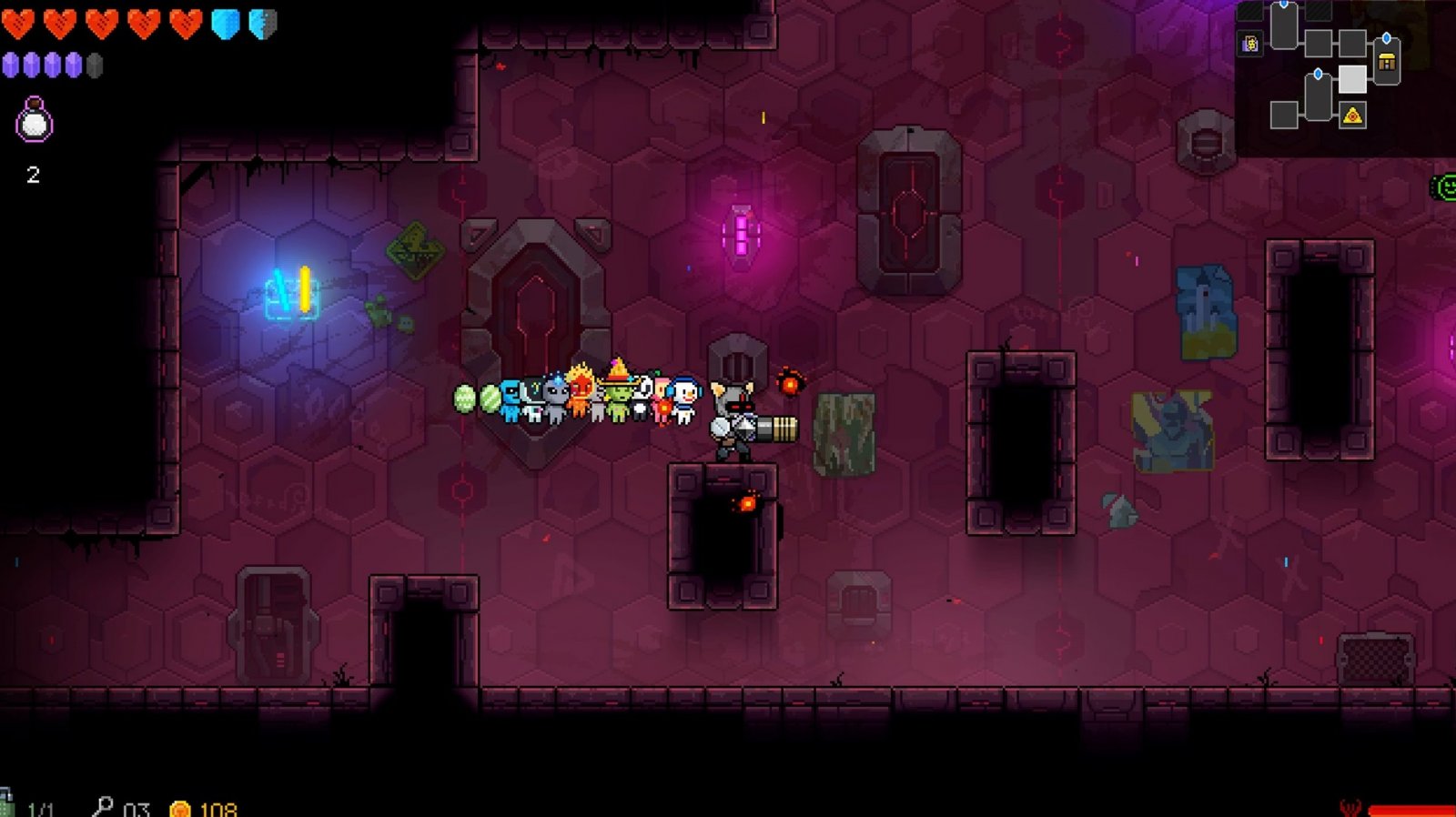 With all this firepower, one may think that you can be overpowered, and you’d be correct. I often cleared a room with a quick pull of a trigger, and even defeated Remington, one of the new gods just as quickly as I entered his domain. It’s not a bad thing, because there are times when you are completely outnumbered and outgunned, but it feels wrong. But I wouldn’t change that. Luck plays a major part in how you progress. Yes, I could clear a biome without taking damage, causing one of my eggs to hatch, but it takes the combination of skill and luck. 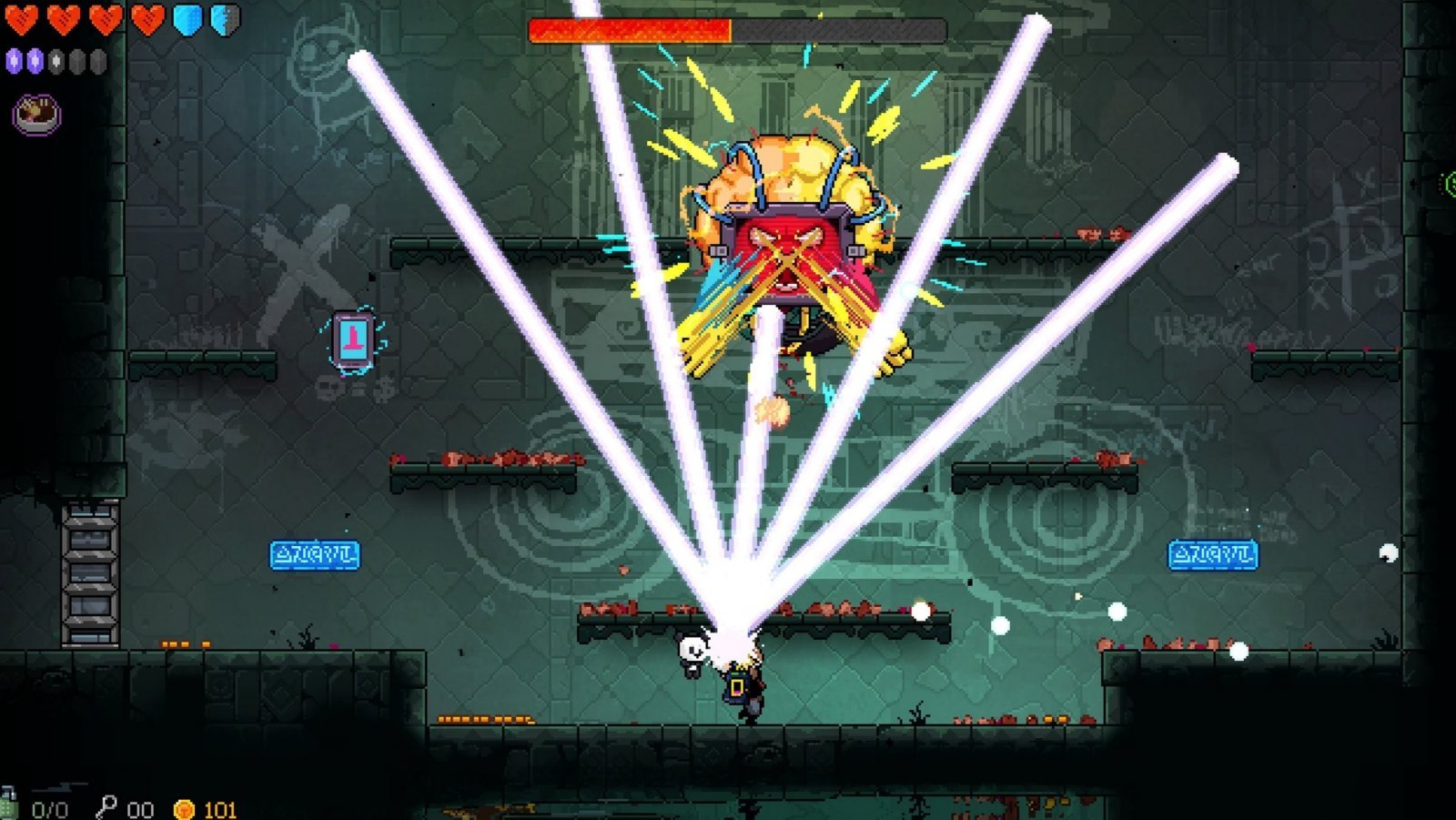 But with good luck, comes the bad; not all playthroughs will benefit you. There were times I couldn’t find keys or health pickups, making it more difficult to make my way through the biomes and to the boss. At that point, you have to play strategically. It may benefit you to fight the boss first and search the other areas afterwards, which you are free to do. But fighting a boss with a weak gun will definitely put you between a rock and a hard place. Fighting the bosses aren’t difficult, as they all appear to have similar attacks. This is where I wanted the game to blow me away. Maybe if the boss battles scaled to my level I would be impressed, but I was able to stand in the bottom left corner, aim, and shoot, and beat a boss.

Neon Abyss plays like a panic-stricken, action, rouge game that knows exactly what it wants to be from beginning to the end. The guns are big, the options are plentiful, and randomness is the name of the game. The boss battles left me a bit empty, but this game is definitely more than a glass half full.

T.K. is a freelance writer, narrative designer, and author. Writing and developing narratives and giving voices to digital world and characters is his passion. As a game writer, QA game analyst, and editor for Gaming Trend, he enjoys being a part of the gaming industry.
Related Articles: Industry, Neon Abyss
Share
Tweet
Share
Submit