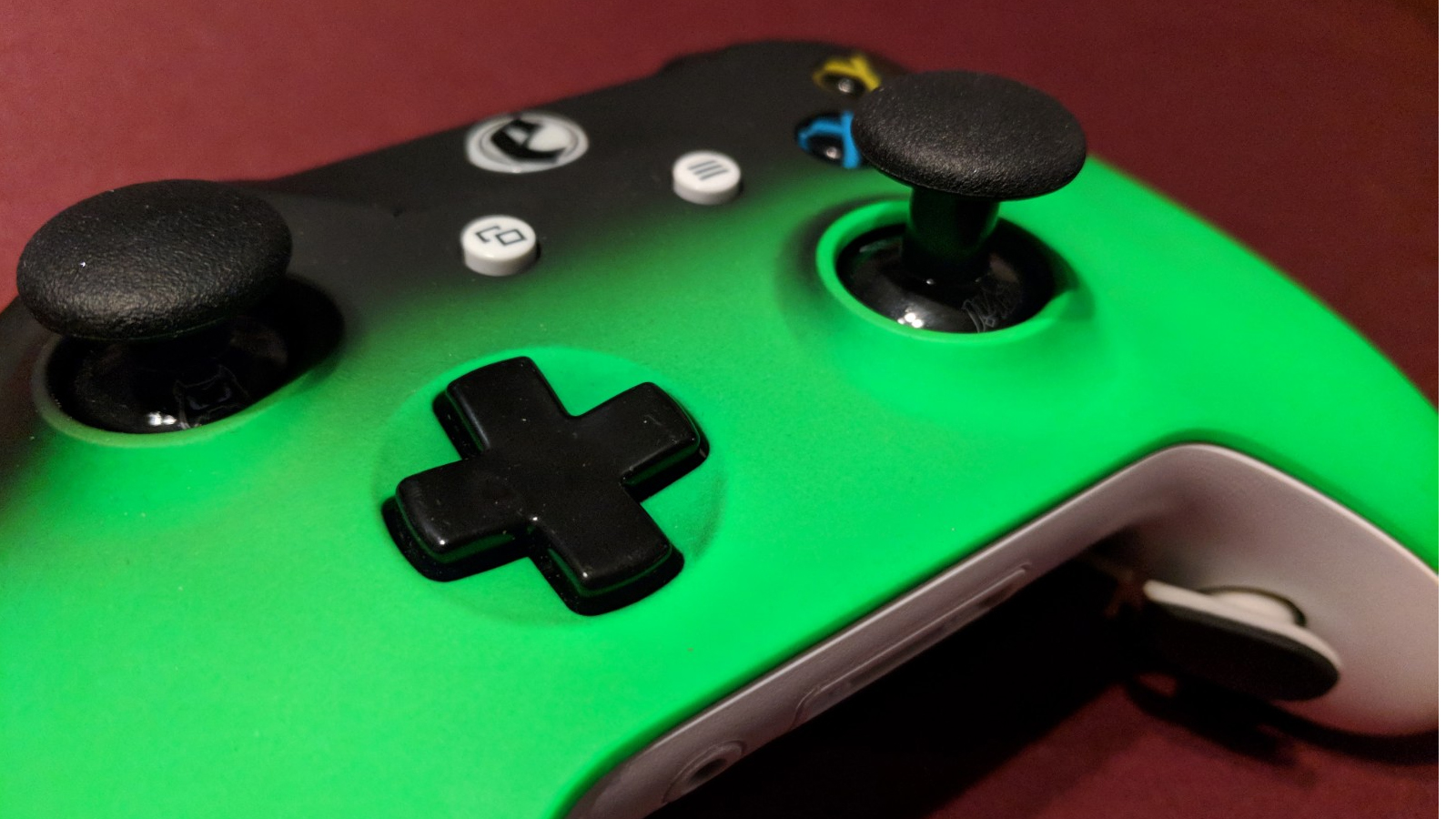 There is no denying that games like Call of Duty, PUBG, Rainbow Six: Siege, and For Honor have made competitive eSports gaming on the Xbox One a pretty big deal. If you want a competitive edge, picking up a precision controller like the Xbox Elite is a no brainer. Evil Controllers, long-time makers of modded controllers for the competitive landscape had other ideas…

Let’s get something out of the way early — the Xbox Elite controller is a marvelous piece of hardware, and you’ll certainly pay for it at $149, but there are some odd design choices given the 100 million dollars in reported research by team Microsoft. Evil Controllers spent the last few years figuring out how to iron out those oddities, and have finally released their answer — the Evil Shift Controller.

The buttons sit closer to the surface of the controller.

Picking up the Evil Shift controller makes an immediate impression that there’s something more going on under the surface. Taking a quick tour around the top part showcases a lot of subtle adjustments that can make a world of difference when milliseconds matter. The A, B, X, and Y buttons are slightly shorter throw than the Elite, and that comes from a change of materials underneath. The face buttons on the Xbox Elite are actuated by a piece of plastic on the underside of the button pressing on a piece of rubber that then presses on a piece of rubber underneath. This translates the pressure to a piece of carbon that makes contact with the circuit board and registers a button press. Evil has shaved a few millimeters off this transaction (.3mm to be precise) reducing the amount of material between press and action. Whether this results in a better kill/death ratio or not is entirely subjective, but I personally like the more flush feel with the surface of the controller face. Anecdotally, I do like the satisfying “click” that these new buttons make, instead of the “clacky” sound of the Elite or original Xbox One controller.

Convex versus concave, and stick height differences are immediately noticeable.

The second and most obvious change comes courtesy of a new set of thumbsticks. Swapping out the concave sticks with a lighter and convex stick isn’t a new trick for Evil Controllers, but being able to swap them easily is. The Shift comes with three sets of “Evil Sticks” – thumbsticks at short, medium, and tall height. While some custom controllers use magnets to secure their swappable sticks, Evil has gone with a post system. With a firm pull straight up on the stick, it’ll dislodge, exposing the contact post underneath. Once you’ve picked the height you want, you align it based on the logo (because, of course they have a logo!) and press them down until they lock in place. No tools are required, and this system lets you quickly mix and match differing heights easily. I’ve been trying out a medium height on the left (which is pretty close to the Xbox reference controller height) and the taller height on the right, and it feels pretty natural. These sticks are also slightly thinner in the center, which gives a few more degrees of movement in all directions without hitting the edge of the case. Again, when degrees matter, these little changes can make a difference. As a cherry on top, these sticks come in a drawstring cloth bag to keep them from running off.

On the rear of the Shift, the triggers have received a bit of attention. The reference controllers have a bit of a stiff but smooth pull, whereas the Shift a lighter structural spring and material. It results in an easier pull by half, and it doesn’t require anything special to enjoy that faster fire time for any title.

The texture and placement makes for a secure grip, and no accidental lever presses.

The back of the Shift is where you’ll likely notice the largest difference between Evil’s controller and the Elite or original Xbox One controller. On the Elite, the paddle design springs from the rear of the controller using long angled paddles. The longer tab floats in space and changes the way you hold the controller, shifting the carefully-calculated ergonomics of the original Xbox One design and leading to a lot of accidental paddle presses. With the Shift, the paddles are replaced by two individual buttons that can be easily pressed with your middle and ring fingers on each side. These buttons, rather than long hinged paddles, have a far shorter throw and result in a faster reaction time. This is accomplished by the Omron B3F actuation switches that lie in the arms of the controller. The buttons are also textured instead of smooth, helping your fingers index to the correct position. And positioning is probably the biggest problem the Shift solves.

The first time I picked up an Xbox Elite controller I felt like I immediately needed to change decades of muscle memory on the way I hold it. The paddles are very much in the way of where my fingers rest, pushing them closer to the center than their natural resting position. The Shift solves this with the contour of the buttons (I hesitate to call them paddles as that doesn’t express how these operate and feel). Better still, the Omron switch is omni-directional, so you can press them from any angle, unlike having to translate pressure in only one place to actual the long arm of a paddle. Over the course of several weeks and multiple types of games, I can’t recall a single time where I accidentally pressed one of these buttons, and that’s a marked improvement over the Xbox Elite.

The omnidirectional paddles are comfortable without changing your ingrained hand position.

With a nod to the MasterMod controllers they’ve made in the past, the paddle buttons can be remapped to act as any other button on the rest of the controller. Pressing the change view button (the stacked boxes icon) then clicking a paddle will cause the Xbox guide button to flash, making the controller vibrate to let you know it’s ready for mapping. The next button you press will be assigned to the paddle you initially clicked, and the process is complete. It’s simple, easy to remember, and can be done on the fly, unlike the Elite which requires you exit your game and fiddle with a separate app.

One of the best parts about the Shift is the one I expected the least. If you look at the Shift next to an Xbox One controller, there are small and obvious differences, but the weight is dramatically different. The Xbox One controller weighs in at 9.6oz with my Nyko battery pack (our review for Nyko Charge Block here), but the Shift is just 8.1oz with that same battery system. It may not sound like a lot, but it’s a dramatic difference in your hand.

If you are getting the impression that the Shift trumps the Xbox Elite in every way, you’ve got the right picture, and it’s true in every way but one. The MSRP for the Xbox Elite is $149.99, whereas the Shift pops in at $169.99. For me, the extra $20 was well worth not accidentally hitting buttons, and being able to swap in sticks at the height I like.

Evil Controllers has been making amazing modified controllers for a decade now, and the Shift feels like the culmination of ten years of acquired knowledge. Microsoft spent over a million dollars redesigning their own controller, and they just got schooled by a little company out of Tempe, Arizona. When it comes to competitive gaming, the difference between victory and defeat is often minute, and the Shift hits all the right notes, at only a marginal premium over the official offering.

Ron Burke is the Editor in Chief for Gaming Trend. Currently living in Fort Worth, Texas, Ron is an old-school gamer who enjoys CRPGs, action/adventure, platformers, music games, and has recently gotten into tabletop gaming. Ron is also a fourth degree black belt, with a Master's rank in Matsumura Seito Shōrin-ryū, Moo Duk Kwan Tang Soo Do, Universal Tang Soo Do Alliance, and International Tang Soo Do Federation. He also holds ranks in several other styles in his search to be a well-rounded fighter. Ron has been married to Gaming Trend Editor, Laura Burke, for 21 years. They have three dogs - Pazuzu (Irish Terrier), Atë, and Calliope (both Australian Kelpie/Pit Bull mixes).
Related Articles: Evil Controllers Shift, Hardware
Share
Tweet
Share
Submit