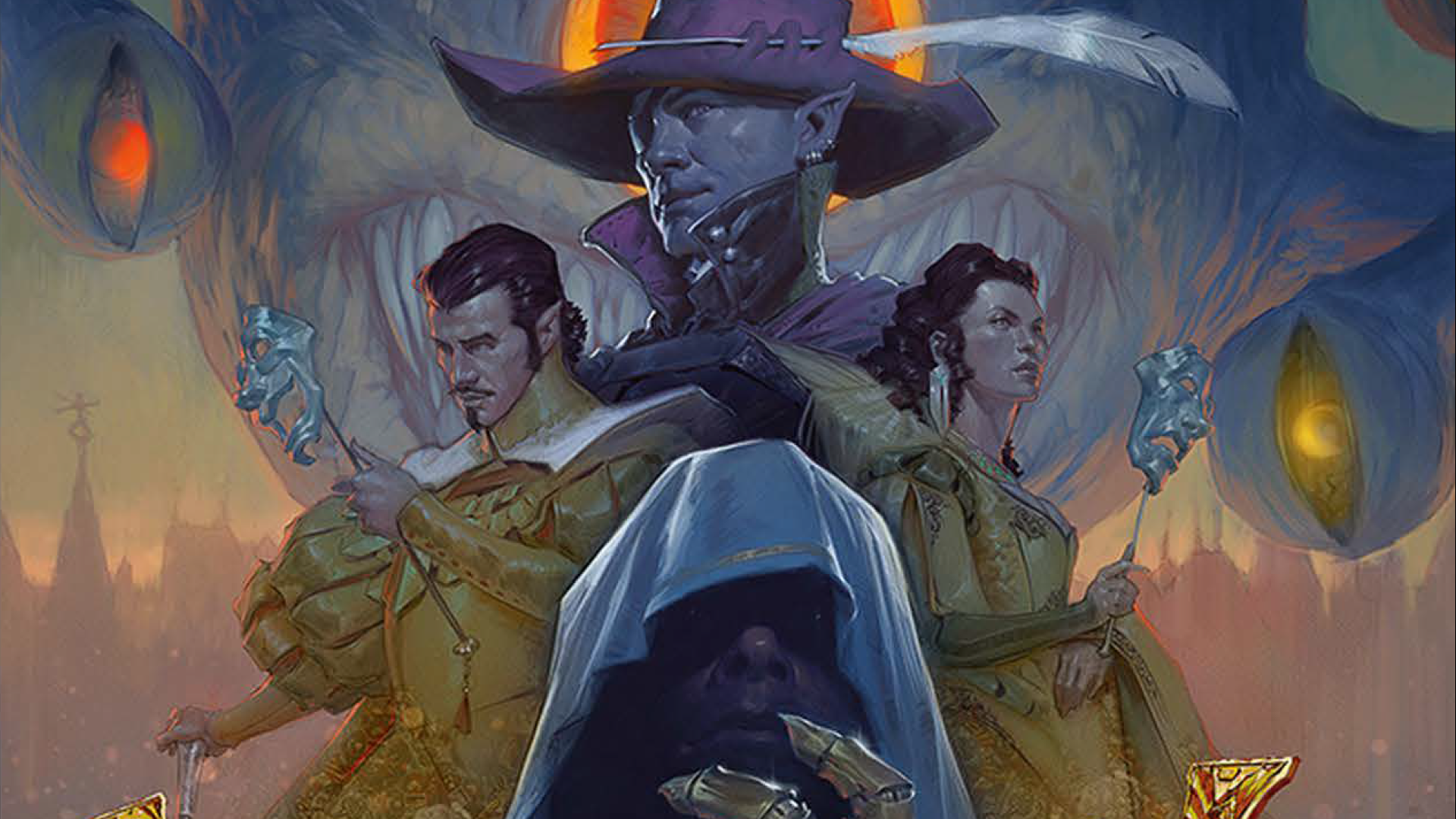 A crisis of identity sits at the heart of Waterdeep: Dragon Heist. Is it an adventure? Is it a gazetteer of Water Deep? Is it a toolbox for urban sandbox adventures? In trying to be all of these, it never commits to any of them well enough, though there are plenty of useful pieces that come along with this product. Recently, Wizards has advanced a creative tactic in to encourage multiple players at any given table to buy its books: put in features for everyone. That’s why Xanathar’s had optional rules right alongside new races, while Mordenkainen’s was a mixture of monsters, lore, and character origins. In those instances the disparate, semi-connected setpieces came together to form an attractive purchase for multiple people at the table. Dragon Heist, while imbued with some creativity and useful features, doesn’t have the same cohesion. Nonetheless, some of the tools for playing in the city of Waterdeep will please dungeon masters who want to explore an urban environment.

Ostensibly, Waterdeep: Dragon Heist is an adventure in the fabled city that you can run through multiple times, each time taking place in a different season and with a different overarching villain. Spoilers for the rest of this paragraph: a hoard of gold has gone missing, and the criminal element of the city has exploded with life as people are looking for the secret to its location. Along the way are some great fantasy concepts to turn things on their head, like the fact that the key is secretly a sentient monster, or the thief magically deleted the secret from his own memory to protect it.

All of the maps are delivered in this faux-notebook style. It could have been for budgetary reasons, but the important details come through so clearly that it proves a good decision.

The book also functions as an introduction to the city itself, with maps, factions, events, and locations to pepper throughout the adventure. Much of the campaign seems intended as a sightseeing tour, giving you a view into what the city has to offer you or future games. I admire the concept of a replayable adventure such as this, but not the implementation. The differing seasons show you different sides of the city; you get to understand its life cycle throughout the year, getting clues to its economy, culture, and organization. The villains are pulled similarly from different aspects of the city’s identity, from its criminal underbelly to its plotting nobles and more. Unfortunately, beyond their identity, the villains fail to have any lasting impact on the plot. If they did, the basic structure of the adventure would have to change, which means either more work for the writers or a less rigid structure for the game.

Now yes, I am aware that no published adventure ever stays as written, and it’s my job to give the villain more life, breadth, and impact on the story as a whole. But the writing of Dragon Heist sits in an uncomfortable middle between what we have to do as individual GMs and what we want when we pay for an adventure. If this was meant to be a free-flowing sandbox with villains playing out their machinations, it sure wasn’t written like one. The structure is far closer to your typical, on rails adventure, except for portions where it cuts you loose entirely, maybe with a few plot hooks, and tells you to kill time until the next important thing happens. So, are we paying for planned, published material, or freeform tools? The book feels confused about its goals.

The adventure relies on assuming players will go in directions they often have little reason to explore. There are some complex plot contrivances and questionable pacing, but worse is the book’s more than occasional use of brute force railroading in instances where players don’t successfully follow the adventure’s obscure logic. When your players stray from the predetermined path, you will be put to some quick thinking to get them back on track. Rather then peppering the city with individuals and clues that would lead you to each story beat, the game assumes more rigid pathways through each event, and doesn’t bother with giving you many contingencies for when things go wrong.

Maybe it deserves more attention, but as with all of WoTC’s releases, the book’s layout, art, and organization are all top of the line…with the exception that the book lacks an index

Dragonheist is meant to take your players from levels 1 to 5, i.e. the least interesting, introductory portion of 5e; as such, I don’t anticipate this adventure taking you very long. The likeliest intention is to give you a quick introduction to the city and let you run wild, but even there I have some issues. For instance, there is a large portion of this adventure where nothing happens. You are expected to run some faction adventures and give your players a level or two while they wait for the plot to happen. It does create time for more replay value, but only because nothing in the book is written up. There is plenty of fodder for adventures in Waterdeep, but I feel they work better on their own than integrated into a structured adventure. For instance, each of the city’s factions have quest lines that you can follow to gain their favor, and specific types of support they can provide. Unfortunately these tables are buried part way through the adventure, not during the latter section of the book outlining Waterdeep.

Replay is also hurt by the villains, who have interesting personalities, but frustratingly little to actually do in this adventure. Whichever villain you pick will correspond to a season, for no real reason, and only really change which NPCs dog the player at a few points during play. Each has a long section to their own outlining their methods, with a special dungeon functioning as their lairs, but in the adventure as written, your players won’t experience most of this content. Like most of this book, they are more useful to integrate into your own game rather than using them as intended.

Of course, what may be the most serious issue with Dragon Heist is a broken promise that, as far as I’m concerned, amounts to false advertising: there is no heist in this adventure. Sure, you go in a vault, but it’s brief and easy and doesn’t have the tenets of a heist. If you are looking to assemble a team of misfits and ne’er do wells for a high stakes crime-fantasy adventure, the adventure portion won’t help you. There is no heist, and the dragons in the title are the name for the coin of waterdeep, rather than fire-breathing monstrosities. If you do find yourself wanting to delve into the experience promised in the TITLE of the adventure, you will find it not in the adventure itself but in a supplement released recently by some of the designers. That supplement adds in vaults that players can attempt to rob, as well as content to make the adventure more replayable and logical. Hanlon’s Razor, as well as the fact that the supplement was made by the designers themselves rather than WoTC, leads me to think this was an oversight that passionate individuals are trying to correct, rather than EA-style carving up of the product for more money. Regardless, it signals the ineffable conclusion that this product is incomplete. Furthermore, if you were hoping this leads into the megadungeon Waterdeep: Dungeon of the Mad Mage, it doesn’t. I don’t consider that a huge flaw, but I can see people inferring that the two are related.
All that said, there is some good reason to pick this book up, if you wanted to run an adventure in a fantasy city. There was a time when I would have suggested Vornheim: the Complete City Kit, but…well…let’s just say that the Zak S. situation complicates the worth of using that book, and this review isn’t a place for that conversation.

On the pdf, the text remains clear and legible whatever the zoom. It’s a small detail that makes a big difference.

The last 60 pages are pure Waterdeep city resource. It’s unfortunately a lot of long text boxes, as well written as they are, which makes me think the DM will read it, pick out some nice parts, forget the rest, and move on. That said, there is plenty to use here. Between a some great maps of the city (that zoom perfectly in pdf form), magic items, NPCs, calendar events, and the aforementioned faction quests, there is a plethora of tools for you to make use of. Much of this is tied to the city of Waterdeep itself, known in some of the most successful D&D videogames ever produced. It has both the benefit and drawback of being very generic as fantasy goes. I consider that more of a boon, as it grants you more ways to use this book if you happen to port it to another location or setting.

I only wish they had nixed the adventure portion entirely, and made this book into a more focussed product. If the price point were lower and you had more resources for buildings, NPCs, and random tables, this might be a premier resource for 5e, even outside of an urban environment. As it is, Waterdeep: Dragon Heist will be attractive to a limited audience only, and even many of them are likely to nix the adventure included in the book.

While less than inspired as an adventure, Waterdeep: Dragonheist has plenty to offer DMs who want a resource for helping them plan an urban fantasy adventure. Much of the content is tied directly into the city of Waterdeep itself, but with dungeons, factions, magic items, and monsters, this will give you plenty of tools to create your own city adventure.

John Farrell is a legal aid attorney specializing in domestic violence, living in West Chester Pennsylvania. You can listen to him travel the weird west as Carrie A. Nation in the Joker's Wild podcast at: https://jokerswildpodcast.weebly.com/
Related Articles: Tabletop, Waterdeep: Dragonheist
Share
Tweet
Share
Submit