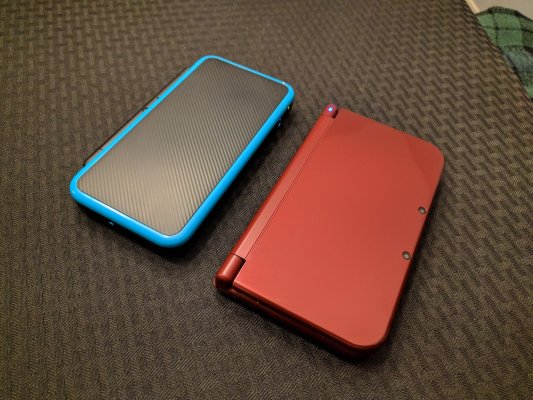 Nintendo could have easily pulled the 3D hardware out of the New 3DS XL, slapped a fresh coat of paint on it, and released it as a “new 2DS” version. But this is Nintendo — a company that pioneered having a Seal of Quality on their games. Instead of the usual repurposed hardware trick, they took their runner-up handheld (The Switch is my new flagship Nintendo portable) back to the drawing board with a host of minor and major updates that should make newcomers and long-time 3DS fans happy.

Side by side, clamshell closed

First off, an admission: I, like most folks, find 3D a passing novelty. The 3D versions of movies get a disinterested shrug from me, and to a lesser degree, so does 3D in video games. When the New 3DS XL was released, I didn’t move from my original 3DS to the new one for better 3D capabilities, but instead for the larger screen and the addition of an extra analog “C-stick”.

Breaking down the New 2DS XL monicker, the “New” portion designates the aforementioned C-stick addition, as well as the two extra shoulder buttons necessary to play games like Xenoblade Chronicles XL, Runbow Pocket, Fire Emblem Warriors, The Legend of Zelda Triforce Heroes, and Super Smash Bros for 3DS, just to name a few. 2DS, of course, designates that this version is 2D instead of 3D. XL simply means that this version gets big screen once previously reserved for its larger brother, but let’s talk about that screen.

The New 2DS XL, a marked change from the solid-plank of previously released 2DS XL, uses a clamshell design similar to the New 3DS XL. The difference here is that top screen; the New 3DS XL is 6.8” tall when opened, and 3.7” when closed, whereas the New 2DS XL is 6.4” tall, and 3.4” tall, respectively. This reduction in size comes with the same sized screen as its larger brother courtesy of a far smaller top bezel. When coupled with a design change that pushes the hinge to the outside of the case, it makes for a far tighter seal between the top and bottom pieces, closing with a satisfying clack. The screen is also recessed slightly into the case, keeping it safe. If you happen to be upgrading from the older 2DS, you’ll appreciate the massive upgrade in screen size.

Aesthetically, I really like the New 2DS XL. My burgundy-colored New 3DS XL is a fingerprint magnet, but the matte finish on my turquoise / black (it’s also available in a orange / white color pallet) cleans easily and doesn’t show handling nearly as obviously. It’s also a good grippy surface to draw it out of your pocket for gaming on the go.

The new hardware profile also includes a few relocations into the mix. The stylus and headphone jack have been moved closer together on the bottom edge, as has the microSD and cartridge slots, both tucked behind a curved compartment hatch. This improvement is huge as it means you no longer need a screwdriver to swap out your SD card. The hatch is also a great selling point as it prevents any accidental card ejections while retrieving the system from your pocket. With a slimmer top screen, the volume button has been relocated from the top screen to the body of the handheld on the left side. Similarly, the speakers have been moved from the left and right side of the top screen to the bottom edge of the system. Slimming up the bottom portion even further, the Home button has been moved from the bottom edge of the touchscreen to the left side underneath the D-pad. The two outside cameras on the New 3DS XL have also been moved, now residing on the bottom rear, and the inside-facing camera that was once on the top edge of the handheld is now located in the center of the hinge for the New 2DS XL. Rounding out the hardware changes, the rear-facing shoulder buttons that were once fairly chunky and square have been replaced with a rounded and more comfortable set of buttons.

Saving the best for last, all of these additions and moves have had a net reduction in weight, surprisingly. The New 3DS XL weighs in at 11.6oz, but the New 2DS XL slims down to a sveldt 9.1oz. This 22% reduction in weight, when it’s weighing down your pocket, is huge.

Also inside the box is a 4GB microSD card, though you’ll quickly fill that up as games like Professor Layton vs. Phoenix Wright: Ace Attorney will eat up 1.4GB, Fire Emblem: Awakening will soak 1.05GB, and Pokemon Omega Ruby/Alpha Sapphire tipping the scales at a whopping 1.8GB in size. The New 2DS XL, like it’s 3DS pal, supports a 32GB card, which will run you about 20 bucks on Amazon.

This hatch is one of the best aspects of the redesign.

Beyond the easily-swapped SD card, also packed in is an AC adapter – a welcome addition given the row over its lack of inclusion in the New 3DS XL launch. Thankfully, it’s the same charger as the other 3DS systems, so what you have used in the past will work here, with one exception. The physical changes to the hardware, especially the hinge in the back, precludes the use of the New 3DS XL dock charger. It wasn’t a huge loss for me as, despite owning one, I can’t even recall the last time I used the dock. Also like its 3D brother, the New 2DS XL comes with full Amiibo support, courtesy of the NFC reader built into the hardware.

If I had one complaint with the New 2DS XL, it’s that it may be coming at the tail end of an amazing run, but it’s the tail end just the same. We don’t know how long Nintendo will support the 3DS line of hardware, and at an MSRP of $149.99, it’s half the price of the vastly superior Nintendo Switch. I’m not suggesting the New 2DS XL isn’t worth the price, quite the contrary, but it’s always a tough sell at the end of a hardware cycle. Don’t let that discourage you, however, since there are still a bevy of first party titles that will be released for the handheld, the most recent being Hey! Pikmin.

The big question any review aims to answer is whether or not the reader should purchase a product. In this case, it depends on which camp you are currently in. If you have a New 3DS XL, there’s little beyond the weight difference and aesthetics to draw you in. If you purchased the 2DS, the larger screen, analog stick, and shoulder buttons makes this an easy sell with games like Metroid: Samus Returns and Fire Emblem Warriors coming later this year. However...if this is your first handheld, with a six year history, over 1130 games in the catalog, and more on the way, you cannot go wrong.

Ron Burke is the Editor in Chief for Gaming Trend. Currently living in Fort Worth, Texas, Ron is an old-school gamer who enjoys CRPGs, action/adventure, platformers, music games, and has recently gotten into tabletop gaming. Ron is also a fourth degree black belt, with a Master's rank in Matsumura Seito Shōrin-ryū, Moo Duk Kwan Tang Soo Do, Universal Tang Soo Do Alliance, and International Tang Soo Do Federation. He also holds ranks in several other styles in his search to be a well-rounded fighter. Ron has been married to Gaming Trend Editor, Laura Burke, for 21 years. They have three dogs - Pazuzu (Irish Terrier), Atë, and Calliope (both Australian Kelpie/Pit Bull mixes).
Related Articles: New 2DS XL
Share
Tweet
Share
Submit