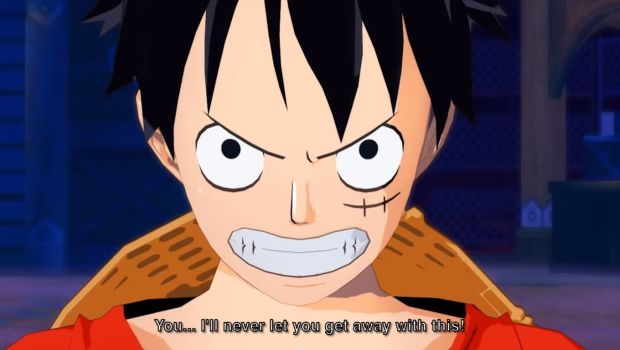 Right off the bat, I’ll tell you that One Piece: Unlimited World Red isn’t a terrible game. It isn’t even a bad game. At its worst, Unlimited World Red is mediocre, not doing much in any direction to sway it into a particularly positive or negative light. It’s a competent action RPG, presenting a unique narrative within the pre-established story of the anime it’s based on, and its characters and settings are faithful to the beloved property it represents. It can even be legitimately fun and challenging. However, One Piece: Unlimited World Red never quite grips that x-factor, that cross section of gameplay and presentation, to move it past the “good” wrung on the ladder of quality.

Despite functioning knee deep in the lore of a 14-year-old anime show, Unlimited World Red has a lot going for it as a stand-alone title. Its chosen style of animation faithfully breathes life into the franchise’s characters, and it holds up beautifully considering it’s a port from the 3DS. The controls transition from handheld to proper controller are a bit more debatable in terms of quality, but at no point are they bad or unpredictable. With some practice you’ll be able to find Unlimited World Red’s ebb and flow, even on the somewhat cumbersome Wii U gamepad. Sound and music palettes serve their purposes but are nothing particularly spectacular. They echo the style of the show and carry the emotion of the various scenes exactly as you’d expect.

However, it’s the completely original story, written by the creator of the anime himself, Eiichiro Oda, that really starts Unlimited World Red’s ball rolling toward being something you may want to own.  Anyone who is familiar with the show knows that it’s pretty eclectic, to put it mildly, and in games like One Piece: Romance Dawn it was the cumbersome approach to retelling this quirky adventure that made it extra hard to swallow for players like myself. While it takes a little while to hit its stride (after the opening but before the end of the tutorial) once this game is focused on telling its own tale, it does it pretty well. You still shouldn’t expect to understand everything, this is still at its heart a game made for its fans, just like most anime-based titles. However, it’s a lot less punishing with what it expects you to understand and much more traditional in how it goes about explaining the rest. These are small course corrections from the previous games, but important ones. It makes the game about as approachable as the show it’s based on, which is a great foundation.

As a game, this title doesn’t really reach toward being more than a brawler and button masher. The various situations brought against the rubber-bodied ship captain, Monkey D Luffy, and his crew are embodied by various dungeons connected to the original character Pato, who has the ability to give physicality to whatever he draws. In these enclosed environments, you, and a party of up to four, battle against spawning hordes of various stage-based opponents. These battles may require some light party management to maintain the momentum of your assault, but only the character you are actively controlling will take any damage even though all the characters you’ve selected will actively take part in the fray. At first, this may seem like a drastic tilt in the scales of power, but Unlimited World Red compensates for this by making your foes extremely hardy and their attacks very effective. If your chosen character falls, the game will freeze for you to select another. Run out of crewman, and it’s off to Davey Jones’ locker. In order to avoid this, you need to dodge or counter when the game prompts you amidst the action, and more often or not, this is the only thing that will keep you alive during the more grueling battles.

However, even though stick-and-move is a totally valid strategy for challenging battles in any game, in cases like this it’s just not enough to balance out an experience originally meant for up to four players. Even when you do counter an enemy’s attack, in whatever unique way each of the One Piecers decide to do so, you might find yourself ducking and dodging for quite some time before you’ll find a safe chance to attack again. This is particularly true of the boss fights, which are truly grand in anime scope, but (also just like an anime) completely overwhelming, primarily because the opponents health is so disproportionate to your own. Don’t get me wrong, I never met a battle that couldn’t be done or even made me rage quit out of carpal tunnel-laden frustration, but I did pause the game and walk away for a bit out of actual physical weariness. These fights can be hard fought, and considering the normal grid of any RPG, you may not always feel like the rewards are worth it. You’ll notice this especially if you’re the kind of player who likes to power-level, like myself.

With just about any RPG I play, I restart several times before I settle in for the long haul. That’s because I like knowing the systems and process the best I can early on as to not waste resources. Then, whenever there is a lull in the story and if the game design allows, I buff my characters as much as I reasonably can, so I can push through another hulk of story and enjoy it without getting stalled on a fight. One Piece: Unlimited World Red, while it appreciates the power-levelers out there, isn’t exactly kind to them, and that’s due to the A-B nature of the stage design, or rather, the A-Wall design of a stage after you’ve conquered it.

While you can infinitely revisit stages to hunt for prizes, take part in fetch-quests or other mini-games, they are built with a final battle in mind and it’s that final conflict that later opens the portal to leave them. Without that battle, the only way out is the way you got in, and for some of the stages which contain numerous portals, camera shifts, and other transitions, your expedition to raise Nami from level 5 to level 6 may take you quite some time. Since EXP isn’t shared with unconscious or non-present characters, maybe even more so. This isn’t an unfair or unfamiliar RPG hallmark, but it is one of the more unpopular ones.

So all in all, I enjoyed my time with Unlimited World Red, and sometimes even found myself wanting to pick it up again outside of the professional perspective. It hits all the right anime notes and tickles all the parts of me that enjoys its more ridiculous tropes. But as much as I support just about any port from any developer or genre to help fill out the Wii U’s anemic shelves, this is still a game that just feels better suited for a handheld market. While two players can be fun, four players working together would change this experience entirely. Maybe if the Wii U supported multiple gamepads (seriously, what is the deal with that?) this would be a completely different review. But sadly, it doesn’t.

I have more good memories than bad with One Piece: Unlimited World Red, but speaking frankly this still isn’t the title to pull the series from its pit of “okay experiences”. It’s more than a step in the right direction, it’s a big jump forward and can be engaging and fun for the right people, but it’s still not the well-polished and considerate creation the franchise needs to really make an impression on the videogame market. I really want this series to have a solid hit, but this still isn’t quite the one.