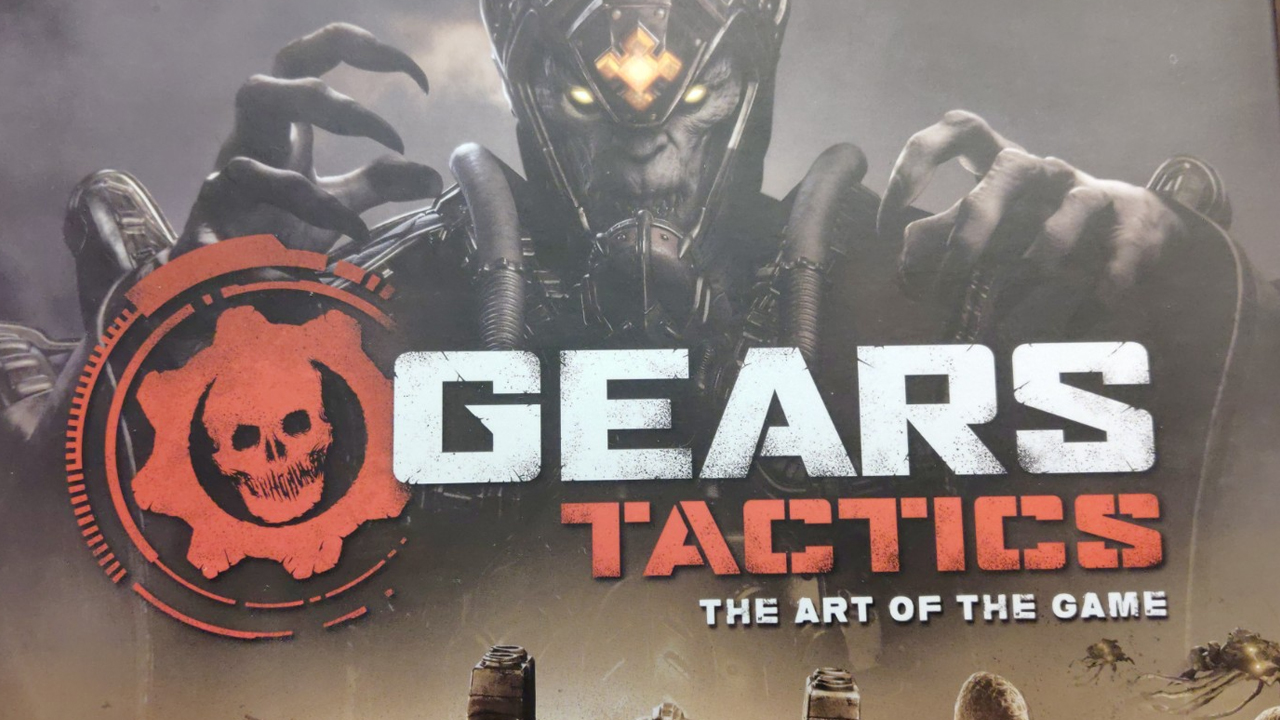 Gears Tactics spelled a huge departure from the usual waist-high wall wastelands in the Gears of War series. Tactics took Gears up from the gritty trenches, making it a tactical turn-based title and turning the whole gameplay we’ve known for the last 14 years completely on its head. Despite being a huge left turn from what we are used to, the whole thing came together, resulting in a fantastic new way to save the world of Sera from the Locust threat (You can read our review from Travis Northup here). I loved it so much, in fact, that it put me on a journey to replay all six Gears of War titles, and also to pick up Gears Tactics: The Art of the Game from Titan Books. Let’s get that active reload going and see what’s behind the wall.

A team-up between Gears veterans The Coalition and Splash Damage, it’s immediately clear from the outset that Gears Tactics is the culmination of both of their visions. In fact, the book is written by none other than Greg Juby, Publishing Art Director for The Coalition. This intro, which is four pages including a special thanks section, covers how the team tackled elevating the bro-fest story prevalent in the early stories and making them into a compelling story that covers the events that lead up to the development and deployment of the Hammer of Dawn. Putting the player in the shoes of a very reluctant Gabriel Diaz, we get to see the run-up from his rising station in the COG to being busted back to the motorpool. Strap in, it’s time for Act 1.

The book kicks off precisely where the game does, exploring the cinematic call to arms for Gabe and Sid, rushing off to try to accomplish one last mission before the Hammer is deployed. Immediately afterwards are two of my favorite portions of the book — the concept art behind both of those characters. Gabe went through a number of iterations, showing a number of hairstyles, ages, battle damage, and features for the main character of Gears Tactics. Similarly, while your choice of armor in the game dictates your character’s look, deciding what he’d look like before we first see him in Gears 4 was a big job. There’s even a concept piece showing an older Gabe, scarred and seasoned, but as they describe this look in the book — “Too old for the journey”. 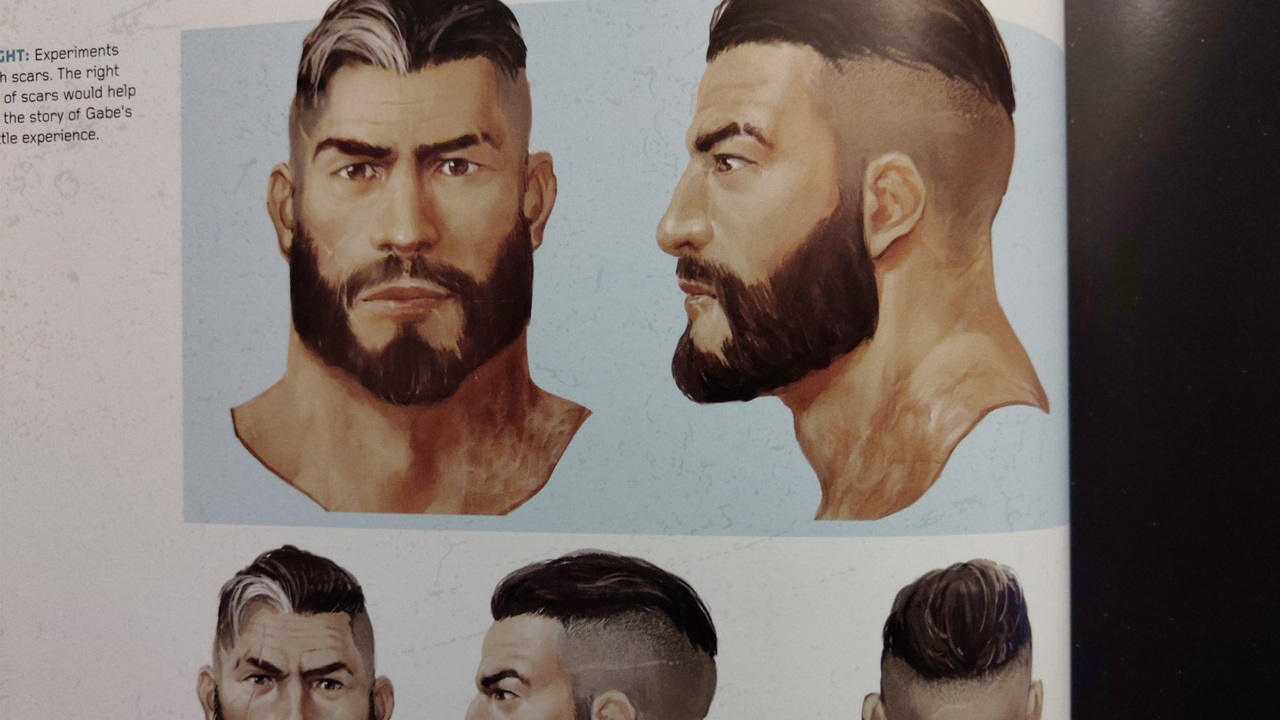 Diaz went through several iterations before arriving at his signature look.

Speaking of seasoned, the next character profile is that of Sid Redburn. Sid is a grizzled old Coalition soldier, with experience dating back to the Pendulum Wars. A grizzled “Magnum PI” type look appeared early for the character, but his overall look went through several iterations, with a great deal of time being spent on his eye patch and how much battle damage this veteran soldier would sport from his previous engagements.

Prescott is a central figure in the Gears series, and generally a pain in the ass. Here we get to see concept work for a younger and more brash Prescott, with the art team exploring just how young he’d really be at this point in the storyline. His backstory and look get the least exploration as Tactics takes place just a year before the first Gears game, so his character was fairly established ahead of this title.

While Gears of War lets you pile into a “hunk of junk”, Gears Tactics puts the team into a Mk. 1 Armadillo truck that’ll serve as a mobile base of operations for the team early on. Here we see silhouette concept art that would let the team dial in the look of the vehicle before they added more detail and texture work into the mix. Ultimately, the team will gain access to larger vehicles as Diaz builds his COG crew, but the foundation is clearly these first concepts. 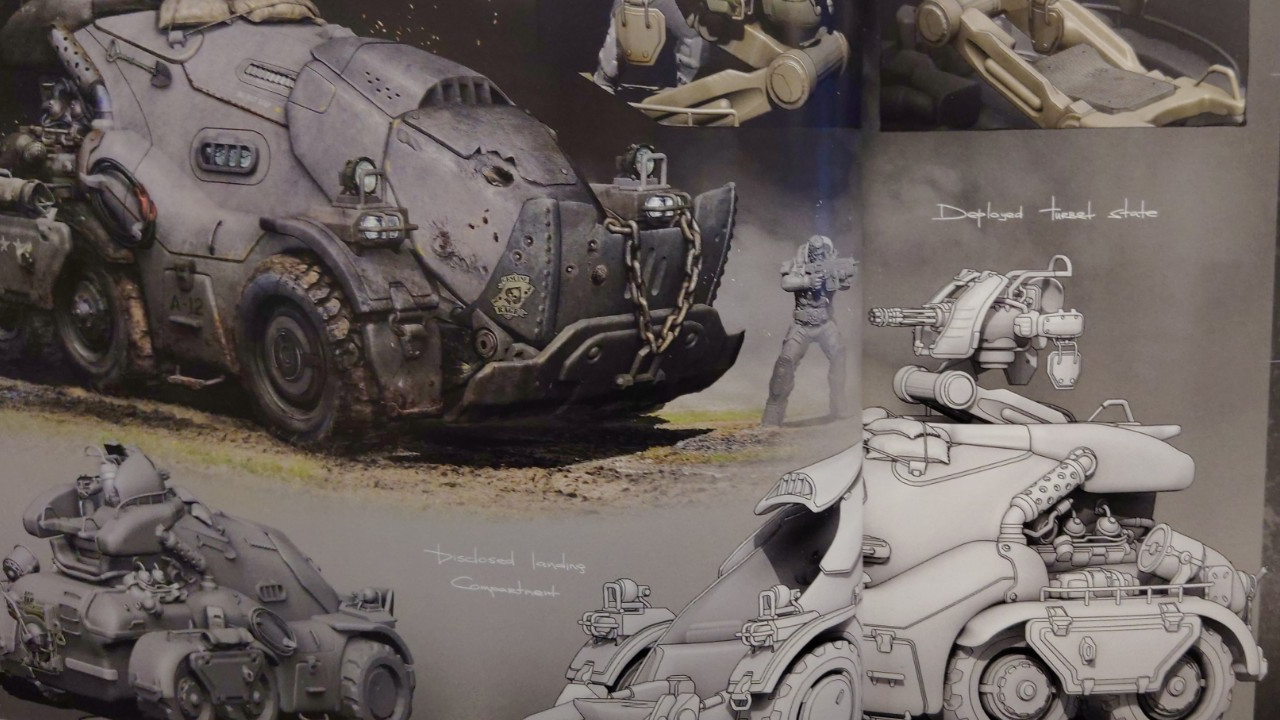 The Armadillo had several iterations as well.

Gears of War’s powerful Unreal Engine delivered some of the best architecture we’d seen in a shooter across the series. That said, calling the color pallete drab would be an understatement. The Splash Damage art team would need to punch up the detail and the color to make spotting details at the higher elevations needed for a tactical title possible, so that’s what they did. Rather than relying on the original artwork, they went to work rebuilding the Locust and the various locations in the game. To raise the “importance” of the garb of the main antagonist, the team also made some minor tweaks to the Zealots and other members of the faction to create a bit of hierarchy.

Fairly early in the storyline we meet Mikayla, the leader of a group of survivors who joins the COG team in their bid to take down the Locust. Mikayla probably saw the most transitions in her concept art, with hints of every hairstyle, and even ultimately a change in race bringing a little bit of diversity to the table.

The big baddie in Gears Tactics is a Locust named Ukkon. Referred to as “the monster who makes monsters”, he represents the ultimate threat in Gears Tactics. As a result, the team put an incredible amount of thought into every aspect of his character, and this book celebrates that in style. 10 pages of concept art, full-page finished models, and even a hideous up close look at his ungarbed face bring this fearsome foe to life, but my favorite piece has to be an early concept that features a heavily garbed and regal looking Ukkon. Having played through Gears Tactics, it doesn’t fit with the final character, but it doesn’t make this artwork any less cool. 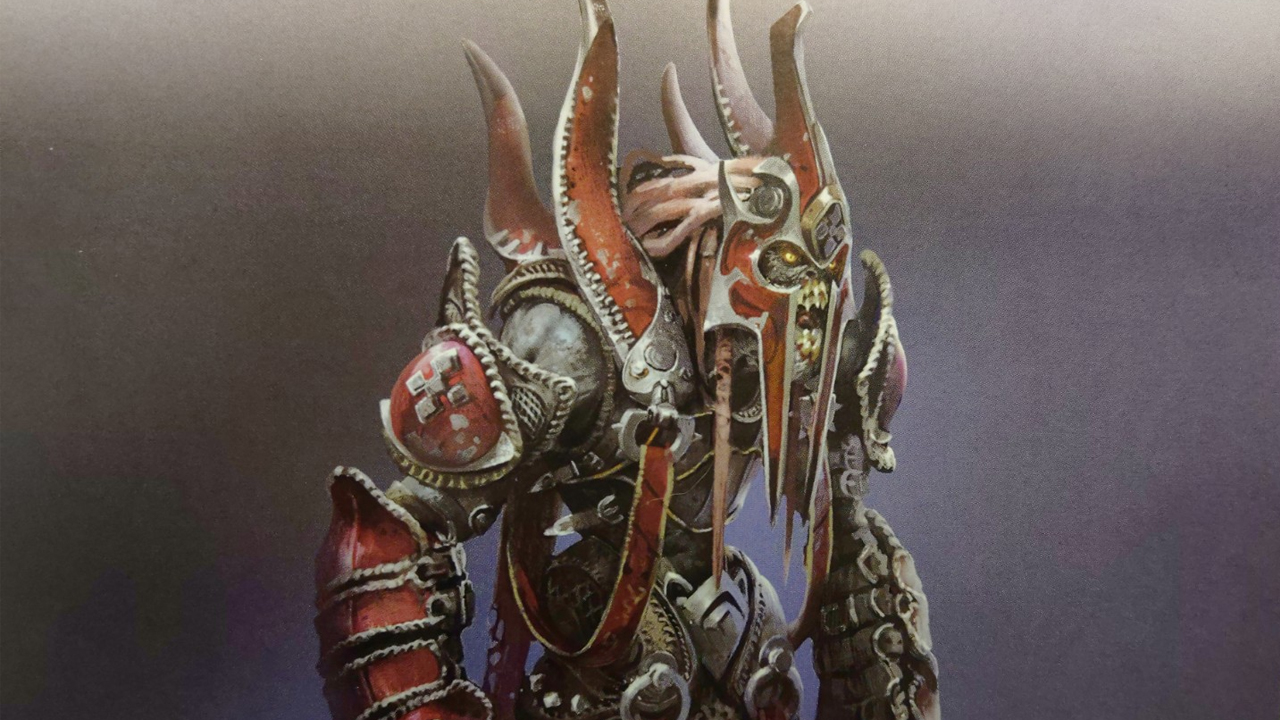 Act II of the book features some locations like Vasgar from Gears of War 5, as well as a deeper look at some of the massive bosses you’ll face in Gears Tactics. I won’t spoil those for you, of course, but seeing all of the ways that Splash Damage thought through the individual pieces of each creature shows just how much thought they put into every aspect of this game.

Act III of the book digs deep into spoiler territory, with some familiar places and faces that I absolutely cannot spoil. Suffice it to say that the final boss fight is spelled out from concept to final details in this section, as well as a quick nod to the incredible lighting in this game to cap things off. 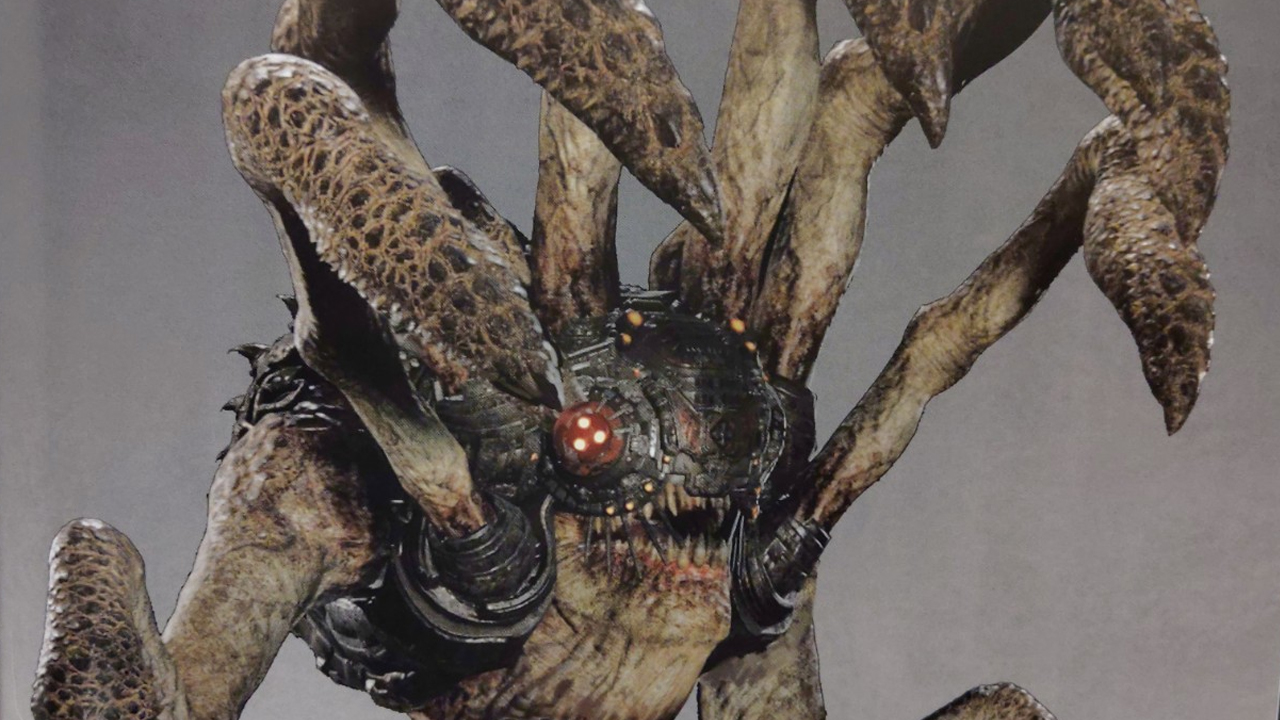 WAY too many legs…

The book closes with something I’ve not seen in any art book, from Titan Books or any other publisher — key art. Key art is meant to sum up the feel and concept of the game with a single image. Bill Elis, a 3D illustrator, was hired to do exactly that, and his artwork is featured here. It perfectly encapsulates the gritty aesthetic of the series, with the in-your-face bombastic chrome skull surrounded by a COG gear and gun barrels beneath it. It’s over the top and a little ridiculous, exactly how we like it.

This key art nails the iconic look of Gears

If I had one complaint, and it’s a minor one, it’s that the Splash Damage and Titan teams have taken a light touch with spoilers in this book. Some of the critters you face in the game aren’t featured here, and it would have been great for those of us who have finished the game to get a better look at them. Still, what is included here is fantastic, and a must-have for any Gears fan.

Gears Tactics: The Art of the Game

At 192 pages, this hardcover book is filled from cover to cover with amazing concepts and final artwork that brings the story of Gears Tactics to life. It breathes even more life into characters that you’ll grow to love over the course of the game, providing a better understanding of friends and foes alike. While Gears isn’t known for its story depth, this book from Titan has something to say about that.

Ron Burke is the Editor in Chief for Gaming Trend. Currently living in Fort Worth, Texas, Ron is an old-school gamer who enjoys CRPGs, action/adventure, platformers, music games, and has recently gotten into tabletop gaming. Ron is also a fourth degree black belt, with a Master's rank in Matsumura Seito Shōrin-ryū, Moo Duk Kwan Tang Soo Do, Universal Tang Soo Do Alliance, and International Tang Soo Do Federation. He also holds ranks in several other styles in his search to be a well-rounded fighter. Ron has been married to Gaming Trend Editor, Laura Burke, for 21 years. They have three dogs - Pazuzu (Irish Terrier), Atë, and Calliope (both Australian Kelpie/Pit Bull mixes).
Related Articles: Gears Tactics: The Art of the Game, Hardware
Share
Tweet
Share
Submit