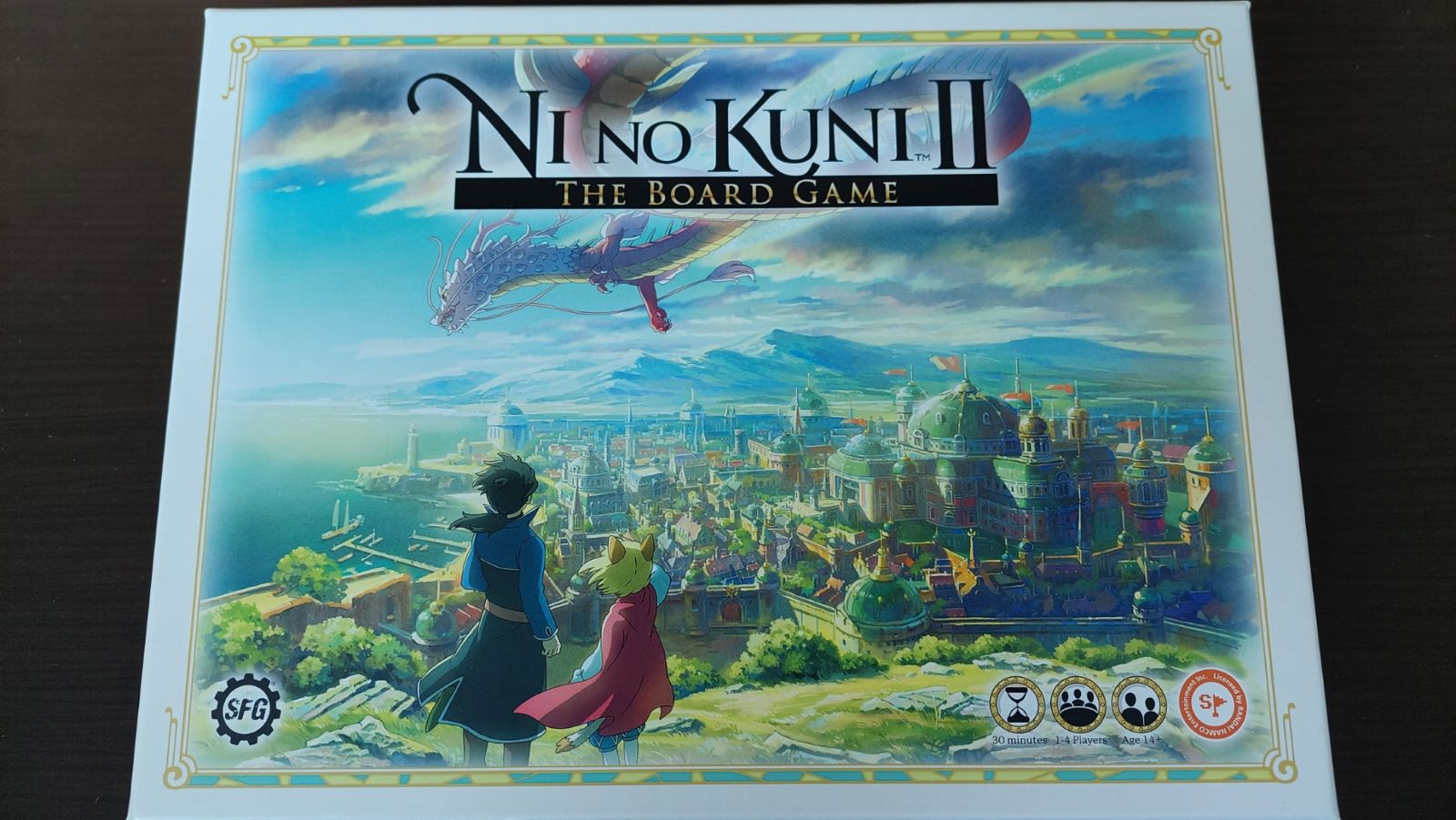 Ni No Kuni II was an, “ehhhh” video game. I don’t remember the story, I don’t remember having much fun, but I do remember the stunningly vibrant artwork and the cute little elementals called “Higgledies.” The non-stop beauty beckoned me to keep playing, to like the game, but the utter lack of substance betrayed my devotion. Overall, I felt the experience was a waste of time. I feel similarly about the board game rendition as well. 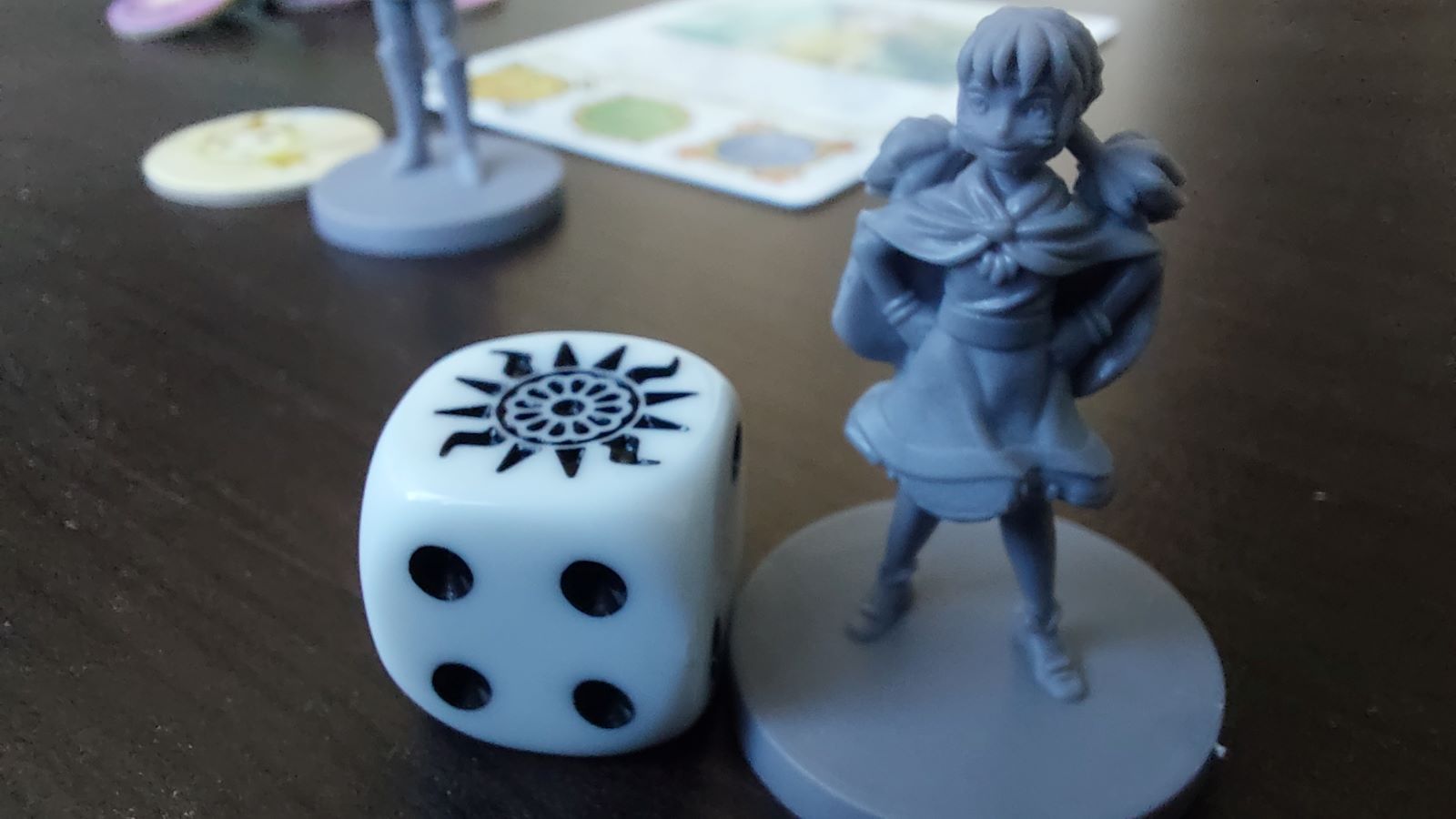 NNK2TBG is a short and simple game. Played in five rounds, lasting a total of 30-40 minutes, players rotate through three phases each. First, players decide which quests to complete by placing their characters and Higgledies on the available quest cards. 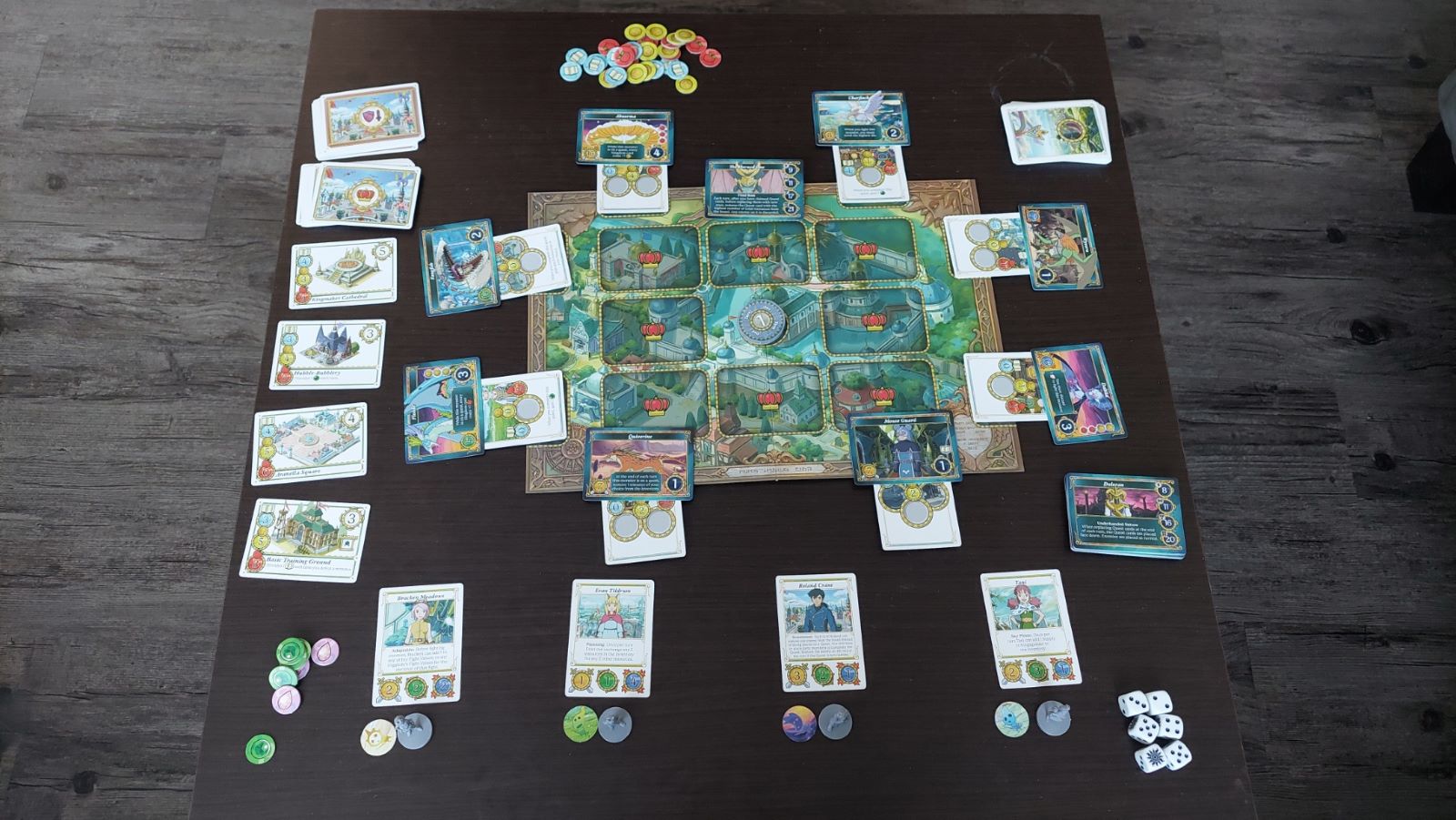 Second, players resolve battles with monsters on occupied quest cards. Each monster has a battle rating and one of three different types: physical, ranged, and magic. Characters have varying fight values denoting how many dice they roll when fighting monsters. For example, if a character with a magic fight value of four faces a magic monster with a battle rating of 16, the player rolls four dice and defeats the monster if the total value of pips exceeds 16. If they roll 16 or less, they lose the fight and their character mini returns in front of them. If they win, the monster card is discarded and any bonus rewards shown on the monster card are received. After a successful battle, if all a quest’s slots are filled with party members, it completes and grants more resources. 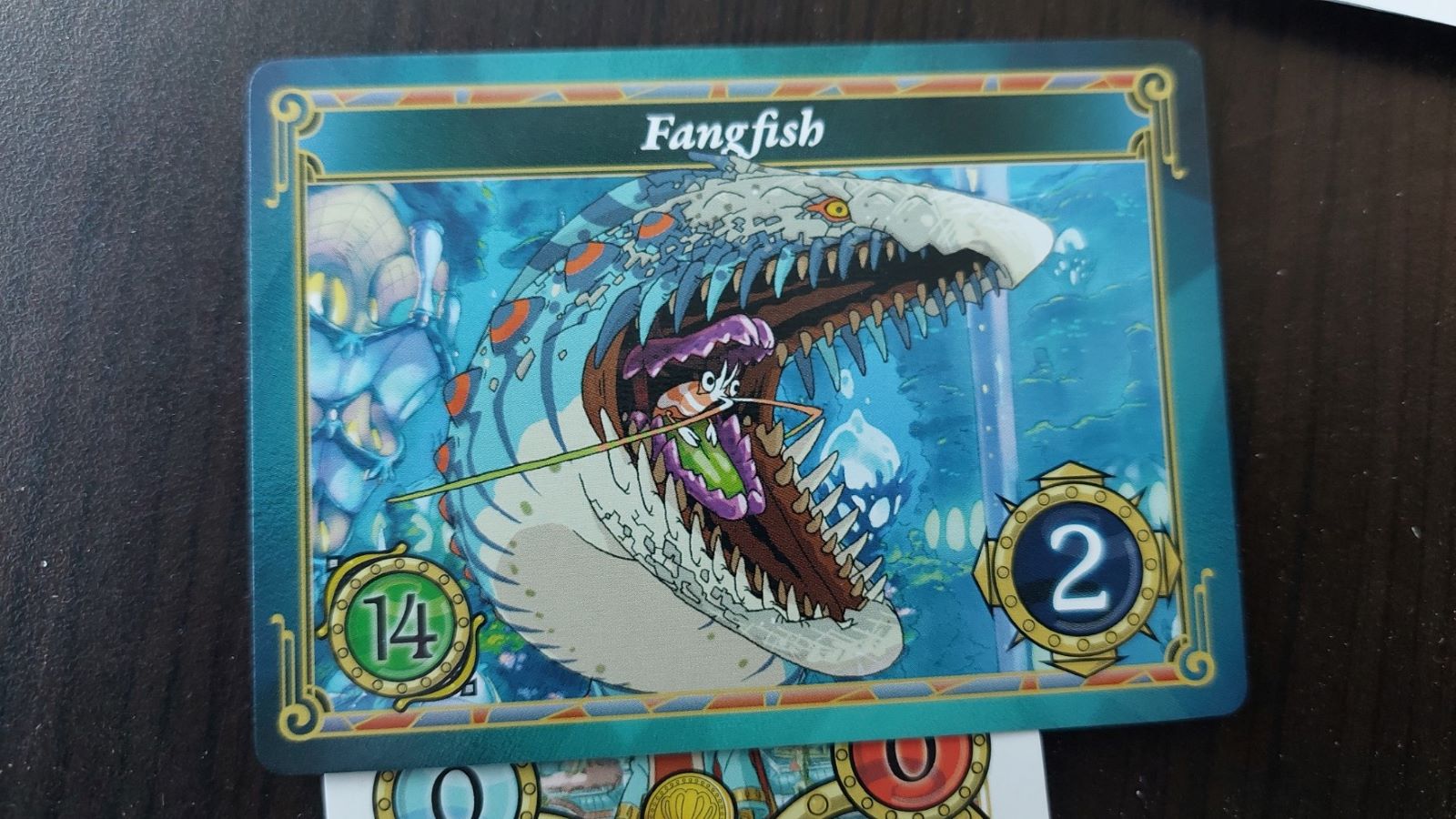 After resolving all battles and collecting all rewards, players can spend resources from the shared inventory to construct buildings in the kingdom. Buildings have varying influence values and some provide once a turn bonuses as well, like granting one extra resource each turn. Wash, rinse, and repeat five times, then you’re done. 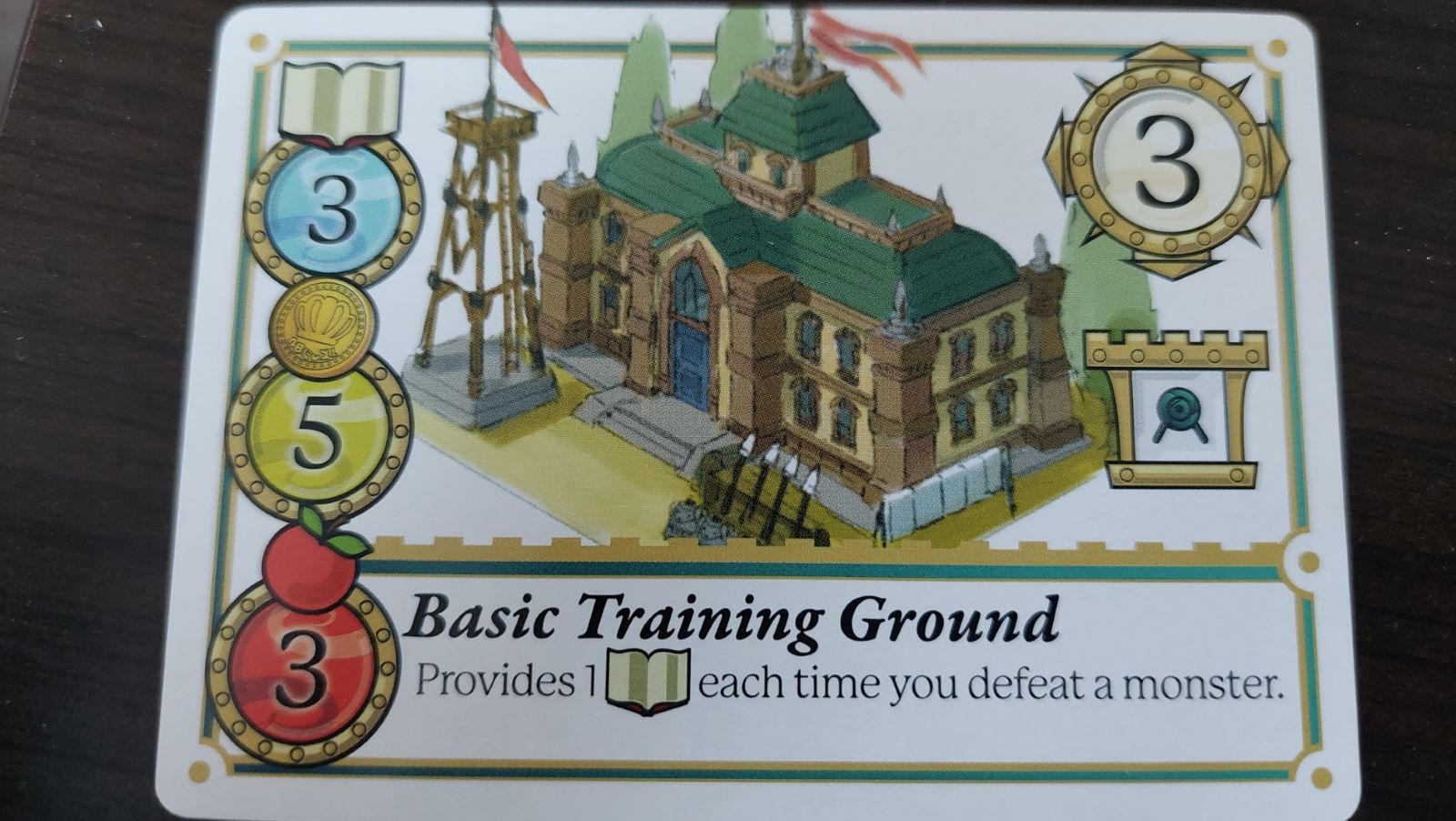 First the positives. Pretty colors. Now the negatives. NNK2TBG’s utter lack of challenge almost prevents it from being a game at all. This might be the easiest co-op game of all time. The rule book did not specify whether the resources are limited, but I’m pretty sure they are supposed to be limited. If they weren’t, getting way more than the max of ten each, an easy feat, would break the game. During my single player games, where correct decisions were less glaringly obvious, they still revolved entirely around rolling six sided dice. Yawn.

Ni no Kuni II: The Board Game

Much like the video game, Ni No Kuni II: The Board Game fails to implant any form of substance underneath its vibrant facade. It’s a faithful representation I guess. Don’t let the pretty box fool you into wasting your time.

Ellis is a fledgling table top hobbyist with a passion for finding and sharing novel experiences. Always on the hunt for a good laugh or competition, Ellis hopes to draw deserved attention towards any conduit of positive memories, small enough to fit on a table.
Related Articles: Ni no Kuni II: The Board Game, Tabletop
Share
Tweet
Share
Submit