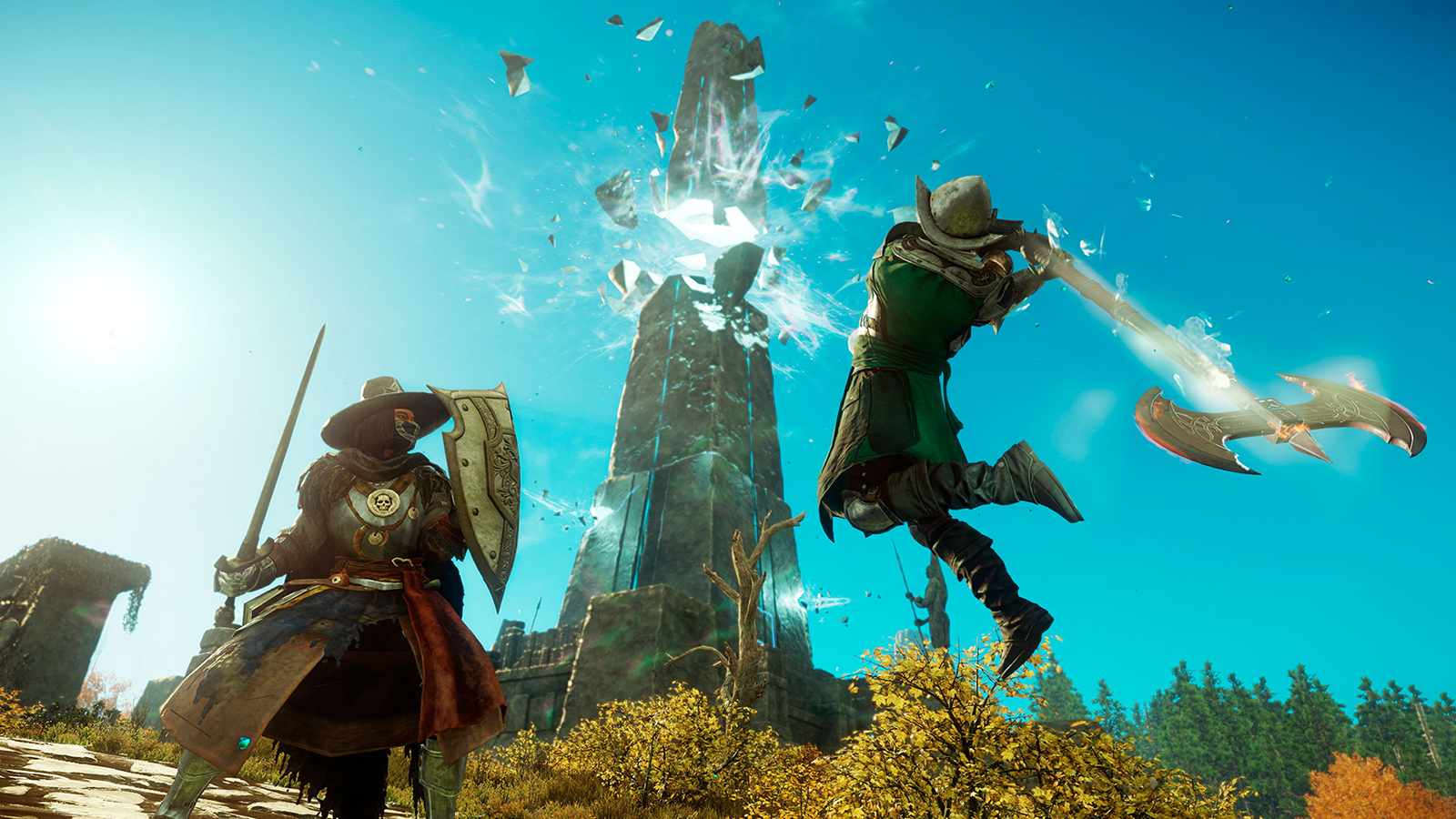 New World is one of the most confounding MMO’s. It’s equally frustrating and fascinating. It’s exasperating yet compelling. It draws you in, then pushes you out. There is so much wrong with New World, but it is magically – I genuinely mean magically – held up by possibility; the kind of hope that urges you to open your refrigerator for the fifth time hoping food magically appears. It’s a world that feels good to play in but too many outdated and flawed design choices eat away all of New World’s goodwill.

Aeternum is big and beautiful. Large trees sway in the wind with majestic god-rays shining through the leaves. There is a wonderful collection of colors within each region, as well as small and large lakes, huge mountains that strangely look man-made compared to the realistic looking boulders scattered around the land, and foggy swamps. Most of the areas even contain their own foliage which helps characterize most regions and signposts what part of the map you’re in. Their natural looking design sparks your curiosity. These details breathe life into a world that’s facing a grim scenario. Corruption has taken over Aeternum and has turned its people into rabid zombies or reincarnated them as wicked versions of themselves. Corrupted areas look frightening. Walk near a Corrupted portal and you’ll walk into a dark red and black mist that blots out the sun and darkens your vision. Areas filled with Corruption are covered in black tar with thin streams of crimson liquid flowing through them. It looks gross. All these elements combined are what make Aeternum feel natural and intriguing.

But traveling through Aeternum sucks. Your only travel options are walking or running. It’s exhausting in real life and it’s exhausting in New World. Grab a quest, run to it. Finish the quest, run back to the quest giver. Start a quest, then run to it. Finish it and run back. Running everywhere without a consistent and faster option is one of the many outlandish design choices within New World. However, Azoth – a material you collect after you defeat enemies and turn in quests – is your alternative. You can use it to fast travel, but you frustratingly spend Azoth faster than you gather it. Plus, you annoyingly can’t fast travel whenever you want. You must be at specific locations to take advantage of it. It gets worse. How much Azoth you spend to fast travel depends on how much of your inventory is weighing you down, how far you are from your desired destination, and what faction owns the territory. So, if your group doesn’t own the territory, you spend more. It’s such an irrational system, it can take 15 minutes to travel to a quest. It genuinely drained the life out of me. 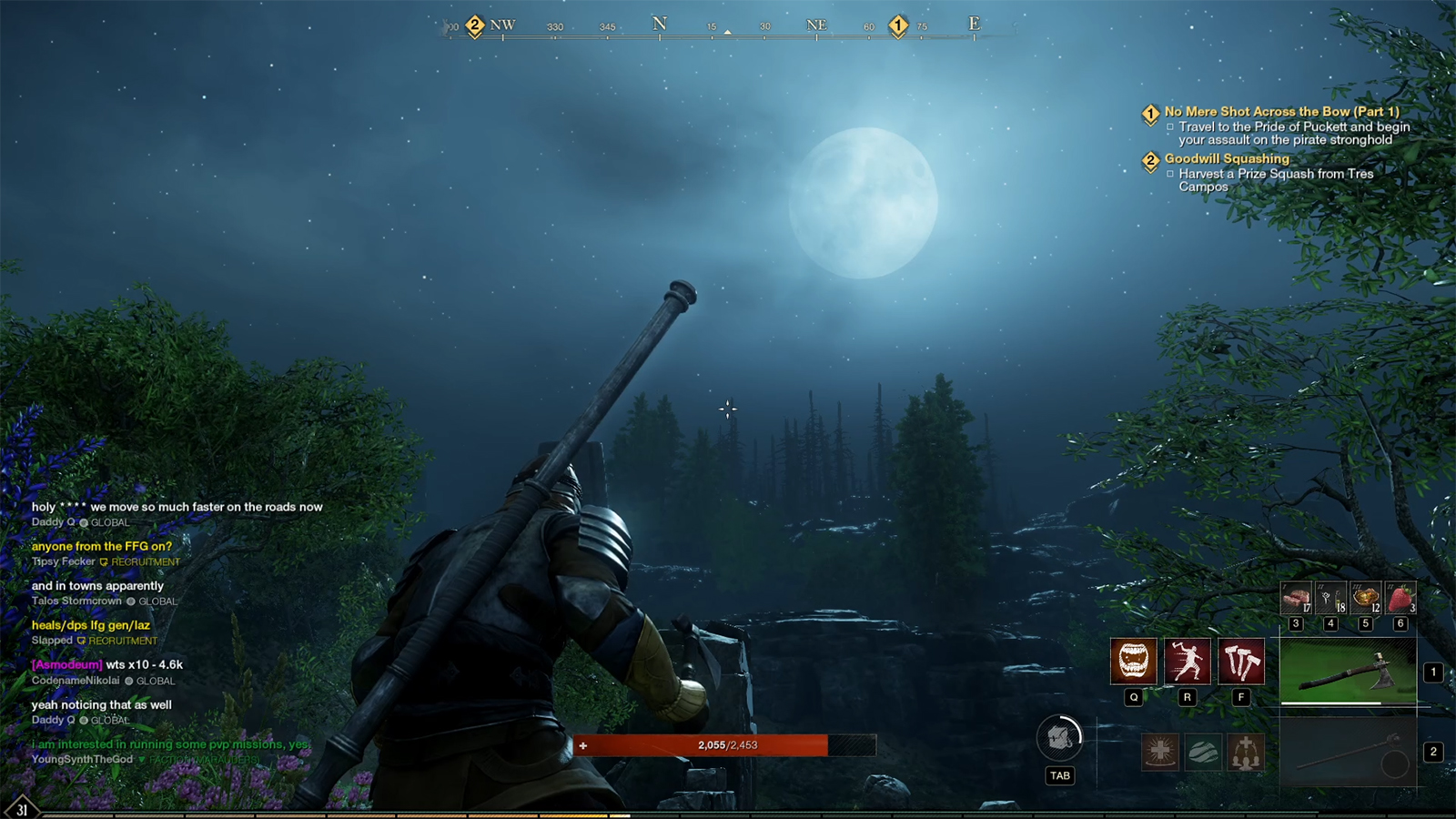 Leveling up takes a lot of time, too. It can take 6.5 hours to raise close to three levels. Running is part of the problem. It’s no exaggeration to say that you spend more time running than doing quests. But traveling is just part of the problem. The lack of main missions carries the bulk of the blame. In my review-in-progress, I noted that I could not move forward in the main quests because I had to reach level 30. I was level 24 or 25 at the time. The same despicable issue came up again at level 30. Reach level 40 to continue! It’s silly that you’re forced to accomplish side quests in order to earn more main quests. The insufficient number of main quests, which grant the most XP, makes leveling take double the time. It takes two or three side missions to equal one main mission. Take all the extra missions you have to do and add that to the amount of running needed to accomplish each mission and you have the recipe for a game that irritatingly doesn’t respect your time. Imagine experiencing this over 80 hours. It’s not pleasant.

Side missions aren’t even fun. They’re all the same variation of fetch quests or kill count kind of objectives with different, mostly forgettable, stories attached to them. Go kill 12 enemies over here. Collect five items in chests over there. You’ll rarely find an interesting side mission like killing an elite enemy, but you will be regrettably used as everyone’s unspoken mercenary, hitman, or delivery person. Whatever side quests that have interesting stories, don’t have interesting conclusions. One series of side quests made me visit all the obelisks in a region to discover the reason for their existence and what they were used for. The conclusion? Ancients used them in the past and more discoveries need to happen. You don’t get to participate in the more discoveries part. You did your part, now scram. The only bright side from completing these troublesome quests is the potential loot you’ll get, but even then, taking on too many side missions feels like trying to take another bite of food after you’re too full. I just couldn’t stomach them anymore.

You do receive, what’s called, “rested XP ” when you inevitably quit playing so long as you’re in a settlement or camp. Rested XP increases the experience you gain per mission when you log back in. Considering MMO’s are typically designed to keep you playing for hours, it’s weird seeing rested XP, but more importantly, it does mitigate some of the XP grind. Not a lot, but it’s helpful. If you play on a regular basis though, you’re not going to receive enough rested XP for it to matter since it adds up based on how long you’re logged off. 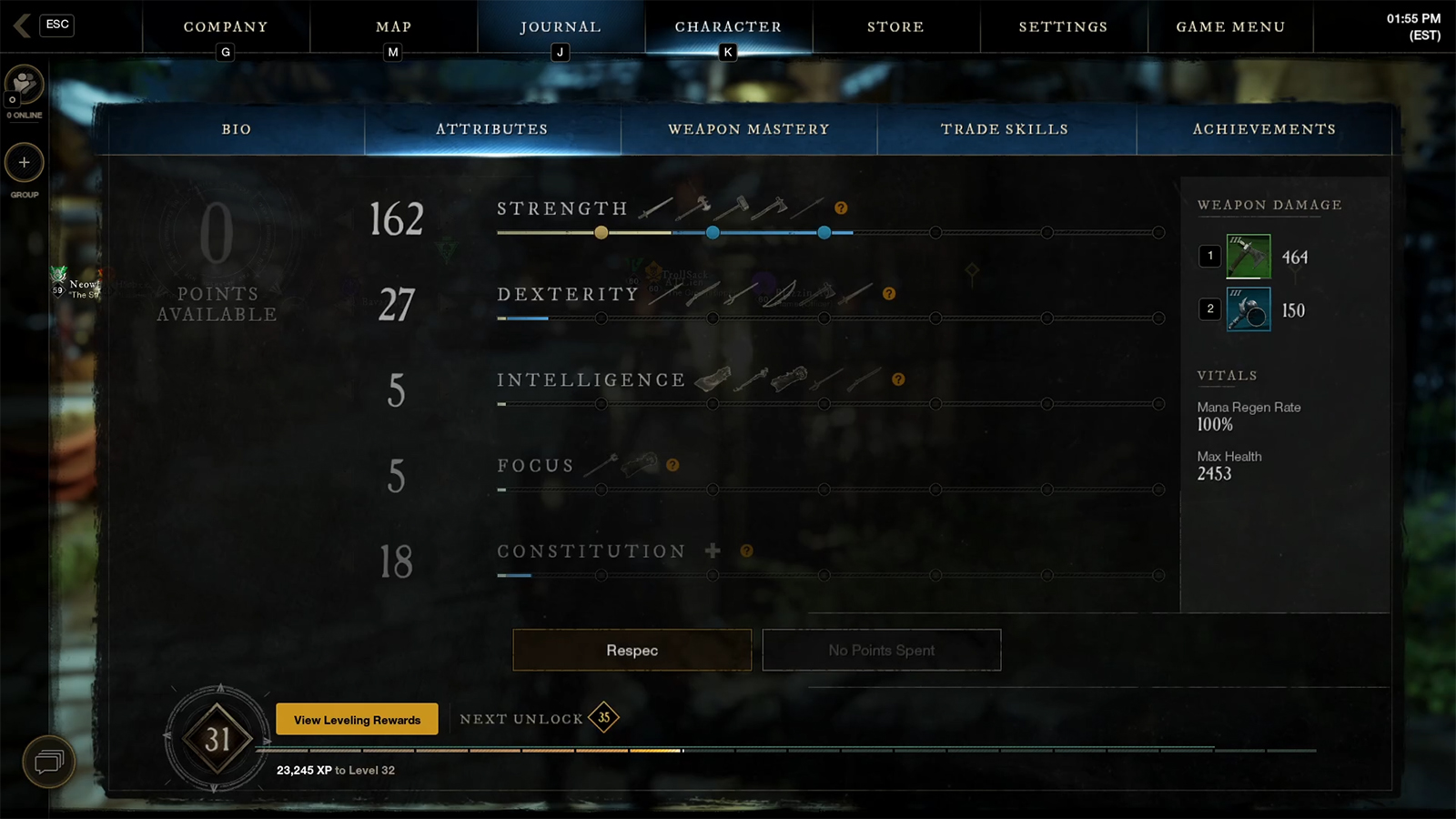 Combat momentarily redeems New World from its monotony and repetition. Yes, ultimately, combat feels repetitive too, but enemies make combat exciting, even though they are boringly copy and pasted all around Aeternum (Amazon Games has noted they’re working on improving this). I love that enemies attack in patterns and each enemy has a different one, so timing my blocks and knowing when to attack kept me engaged. Some higher level enemies include one or two more variations on their attacks which made combat more exciting. It’s not until you’re in an area for a long time that you learn patterns and the repetition sets in. You can hold two weapons and each weapon you use can be leveled up which allows you to drop points into that individual weapon’s skill tree. The concept is simple but the opportunities are pretty extensive making discovering the appropriate armor and weapons part of the fun. I’m running a Hatchet/Life Staff combo, which seems to be one of the best combinations out there, but I chose the Hatchet because it feels good chopping up enemies with a light hand axe. All the weapons feel good, too. They come with their attack styles and weighty animations creating new wrinkles in combat approaches. I particularly enjoy the Hammer and the Great Axe, as well. I can feel the weight of the Hammer as I pound the enemies in the ground and smash them like a sledgehammer to concrete, and the Great Axe comes with spinning attacks that suck your opponent in, allowing you to keep overwhelming them with damage.

Consequently, finding good armor that buffs your playstyle feels exciting (a few sets look cool too). All armor fits within a certain weight class: light, medium, and heavy. Each weight comes with specific perks that can alter your playstyle in interesting ways. Wearing all light armor gives you multiple nimble dodges because it takes less stamina. But if your armor is too heavy, you essentially get one slow dodge because it takes a lot of stamina. There are other weight-based perks like a 20% damage bonus for wearing all light armor, but I’ve hardly felt those effects. Your playstyle can determine what works well for you, which is nice, but it seems medium and heavy armor are the best choices. But we circle back to weird design decisions. Certain unique armor comes with specific buffs to skills related to different weapons, but they don’t correlate with the rest of the armor. For example, for every character level you earn, you can place points into stats that buff the kind of weapon you’re using. In my case, I would use strength and dexterity to strengthen the power of my hatchet. So when I’m looking for armor, those are the two stats I want to build on. But I have found some armor that buffs strength and dexterity but offers a skill perk that has nothing to do with any melee weapon, making that perk useless and a waste of space. I’m not going to use a perk for firearms when strength and dexterity don’t buff firearms. Until Amazon Games changes armor pieces like that, it will always drop with that perk and those stats and would be completely useless overall. This is basic loot design. How this happened in 2021 boggles my mind.

What’s also mind boggling is how Aeternum struggles with the battle against corruption, but humans still can’t help but fight each other. But that premise sets the stage for factions. There are three factions and each faction fights for territory control. When one controls a territory, all members of that faction receive reduced taxes and reduced prices towards crafting as well as other benefits, giving a necessary incentive to join one. There are safeguards against everyone joining the faction that controls the most territory, thankfully, but there’s not much that can be done to encourage people to engage in PvP, which is one of the primary ways to start taking back territory. You can toggle PvP on or off, but when you engage in PvP, you’re open for attack from other factions while free-roaming. You could be fishing, doing a main mission, or, in the case of PvP related activities, completing a faction quest. Faction quests allow your coalition to push closer to war with the controlling alliance. In theory, it’s a fine system and it did encourage the population to fight each other early in New World’s life, but people stopped playing and now anyone lower than level 55 can’t engage in PvP. I’m going to get curb stomped every time. I can do PvE faction quests but those missions take longer, offer less rewards, and require extra distance to travel many times. Basically, Amazon Games is trying to force PvP engagement. It’s not working. 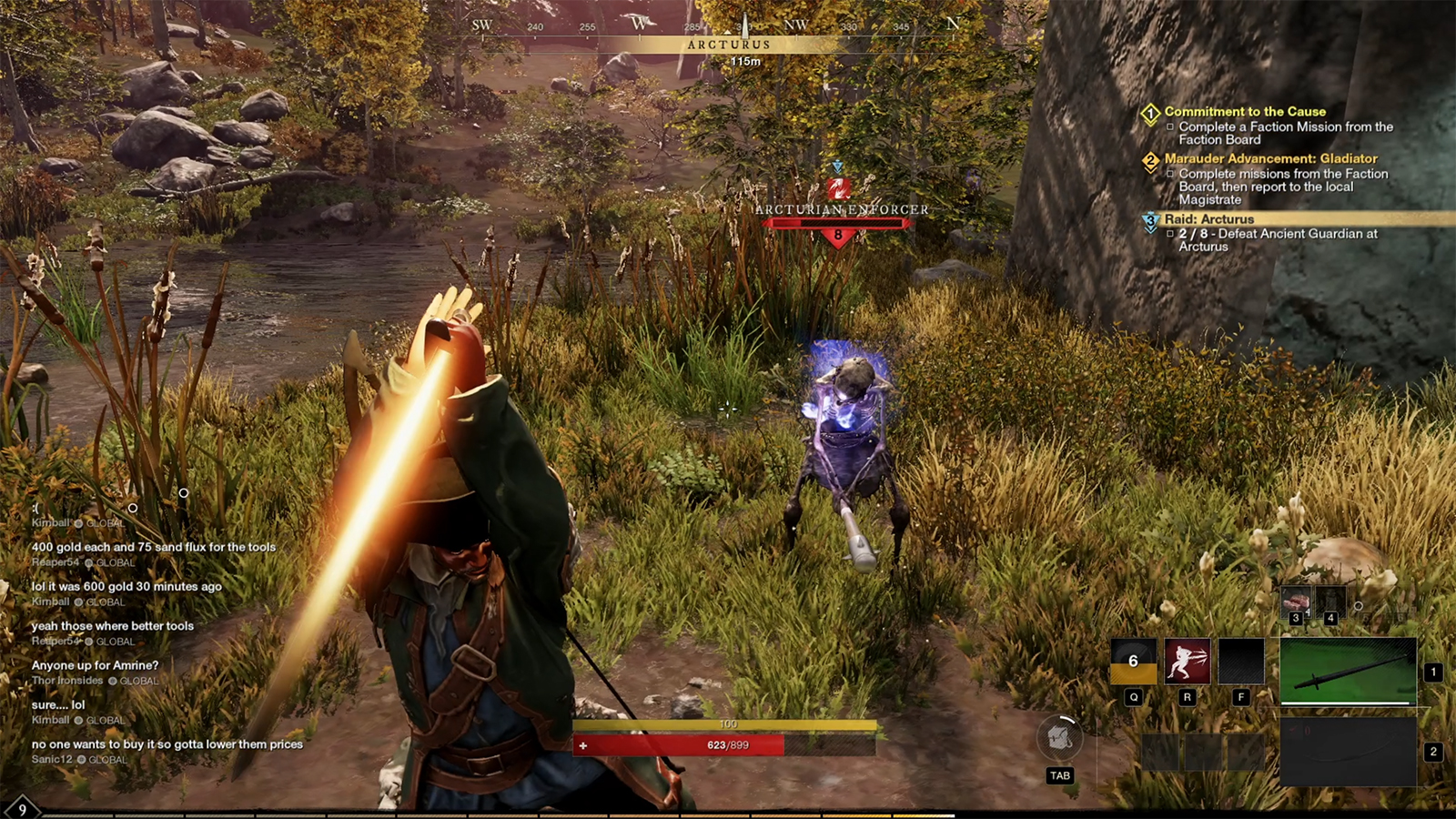 What does that mean in the long-term? We’re useless to any affiliation. That’s fine but that means less people are contributing towards territory takeovers and it implies that the only folk that matter are those at the highest levels. It doesn’t help that all the best content is endgame content. Wars are 50 versus 50 battles and there’s no way to do that unless you’ve reached max level. The same goes for Invasions, which is PvE content where waves of Corrupted attack a settlement and you must defend it. Same with Outpost Rush which is a PvPvE mode. There’s literally nothing else for lower level people to do. I’m not advocating making War, Invasions, and Outpost Rush non-endgame content, but if there’s no adjustments to those pieces of content, then Amazon Games needs to add PvP content for lower level people.

New World exemplifies not judging a book by its cover. New World starts like a competent MMO with lots of activities, many ways to engage with players, and an endgame that sounds very appealing, but the deeper you go, it reveals itself as a mess with loads of baffling design decisions that suck the life out of Aeternum’s, otherwise, beautifully crafted world. I never want to step in Aeternum again.