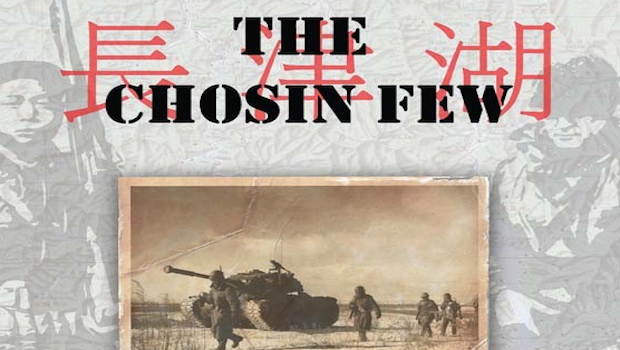 The Korean War is often referred to as the Forgotten War. Wedged between the victory of the Greatest Generation and the quagmire that became the Vietnam War, the conflict in Korea gets largely overlooked. The war’s omission in mainstream consciousness extends to board gaming. Dozens of World War II titles seemingly exist for each game that uses the Korean War as a backdrop. That’s why it’s refreshing to see companies take on this ignored conflict as Victory Point Games has with their recently released solitaire game, The Chosin Few.

The Chosin Few’s focuses on the Battle of Chosin Reservoir, a desperate fight between an American-led United Nations force woefully outnumbered four to one against an onslaught of Chinese troops. Despite the odds, the Americans managed not only to withdraw but also inflicted significant casualties to the oncoming Chinese. Kudos to designer Nathan Hansen for even attempting such a battle. Most war games tend to be fairly balanced or at least provide opportunities for both sides to go on the offensive, but it’s a challenge to replicate such a one-sided affair.

Yet, lopsided conflicts are a bit of a staple with Victory Point Games. Their impressive line of States of Siege games often cover hopeless situations where a player’s goal is to simply survive. While The Chosin Few shares the series’ precarious situations, the game has a completely different flow. The player takes on the role of the American forces and must meet three objectives to win. Chinese forces can come from all angles instead of set tracks throughout the game. Each objective card changes the starting position of Chinese forces. So as the American forces are trying to capture objectives and ultimately escape the area, the Chinese forces react to keep up the pressure. It’s still scripted, but the deployment of the Chinese forces does a great job of reflecting the odds the Americans faced. My only complaint is that there’s no visual marker to indicate you’ve reached the point in the deck where one objective must end so another begins. My advice would be to streamline the transition from objective to objective by separating the decks beforehand.

Facing four or more blocks in one turn can lead game over in a hurry.

The game’s rules are very straightforward. Every turn consists of three phases. An action card is turned revealing where three Chinese units will appear. Chinese units are represented by different colored cubes that are blindly drawn. Colored cubes have the same attack value, but the action cards let you know which colored cubes advance during the turn. Unit movement depends on the location of the two American units, marine and army. If the Chinese movement allows them to reach the American location, the Chinese attack. Battle resolution comes down to a die roll against the current American strength. Win and the Chinese are pushed back. Lose and the Chinese are still pushed back, but now the Americans strength is reduced. When one of the two units is reduced completely, the game is over. Be prepared for this to happen a lot.

If they withstood the onslaught, the Americans then get to react in the final action phase. The bottom of each action card gives the Americans action points. Those points can be spent on movement, attacking, rallying, or obtaining air support. Attacking is the only way to remove Chinese cubes from the board. Movement is needed to reach objective areas, and should you ever need to rally, you’ve probably already lost the game. The real key is managing your air support. Air support can be bought from any leftover action points not used on other choices. Air support is very versatile as it can prevent Chinese troop movement in or out of one area. It can allow a reroll of any attack result to keep from losing that precious American strength. It can even be used to gain a bonus to your dice roll. A player can only have three of these at a time but maintaining a stockpile is vital when the next action card may result in five or six Chinese units attacking you at once. There may not be a lot of options on how to spend your action points, but you’ll never feel like you have enough of them.

Number and color combinations determine from where the Chinese attack from, and how many they bring to the action.

You may have noticed I sound dire about your chances of winning this game. It’s because your chances are pretty slim. While there’s some good decision making on how to use those action points, the game does come down to a significant bit of luck. Blind cube draws, die rolls, and action card order can all go a long way on whether you face a hard challenge or a downright brutal one. It’s not uncommon to go into a turn with full health and three air support tokens only to lose it all in a wave of cubes. The game is unforgiving, and you can’t help but feel like even the best laid plans can be mauled by the luck of the draw and die.

It took my third play through before I was able to even make it past the first objective. I am not the second coming of Douglas MacArthur by any means, but even the Big Chief would have trouble making headway in this game. That may sound harsh. After all, this is a Victory Point game, complete with quality components, simple rules, and a solid map that reflects the bleakness of the weather both sides faced at the time. The argument can certainly be made that luck plays a role in a vast majority of games, but it shouldn’t be the main factor balance between winning or losing. There’s no doubt I will keep playing just to complete the challenge. Yet, should I ever beat the game, it’s possible that I may ask myself, “Did I create a brilliant plan or was luck simply on my side?”

The Chosin Few does a good job of replicating the onslaught the Americans faced in the Battle of the Chosin Reservoir during the Korean War. The mechanics are sound, and there's a tremendous amount of tension. The game does lean heavily on luck, so even those employ the best laid plans may get frustrated at the difficulty of progressing in the game.