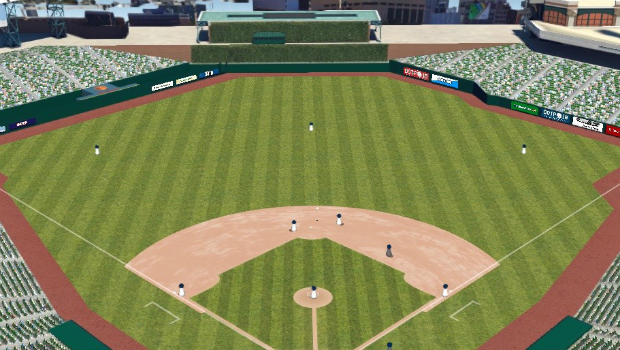 Adding a new mode of play that stresses involvement over pure simulation, providing historical access to leagues and players long past, and emphasizing online access are just the new additions to a game already solidified as the top of its class. OOTPB 18 takes up the mantle of its namesake and runs with it all the way home.

OOTPB 18 is a pure baseball simulator. For those who have never enjoyed such a title, you’re taken off the field of play and put into a hybrid manager/GM position, running the team from a decision-making perspective. You’ll manage the team day-to-day with the inner workings, and you’ll also be making the strategy decisions in-game.

OOTP classically gives you full control of the team, the world you are in, and pretty much any other aspect you can imagine. Now fully licensed by the MLB and its players, the game lets you jump right into an authentic real-world game at any time but still gives you the option of fully customizing the teams, players, and world.

If you wanted, you could sit down and individually name, rate, and place each player onto teams that you have created, in multiple leagues in a baseball universe you’ve tweaked to your imagination’s limit. I know for a fact that there are people out there who would spend hours and hours just doing that, and giving those people that full, powerful customization option is appreciated, even if I would never personally do it.

The historical play is my favorite aspect of OOTP 18, and this year, the game has expanded the past, now including the Negro Leagues in their various stages throughout the years. These are historically accurate rosters and faithful recreations of these players, and their first time being included in a baseball video game. Other leagues, including the ill-fated Federal League, can be found in the years they were active.

Historical play is set up by era and then year, and it allows you to take a team and work to either recreate their success or change the outcome of history. You’ll be able to play a full game here in the historic mode, just slightly differently and with a different set of goals. I love seeing the old teams, how players were projected and viewed at the time, and what great pitching units or lineups have been forgotten.

In addition, the game allows for the quick setup and play of a seven-game series between any two major league teams throughout history. I was able to see who would win between the 1936 Yankees and the 2016 Cubs (the Cubbies) and also between 1907’s worst, the Milwaukee Brewers, versus 2016’s worst, the Minnesota Twins (with the Twins cruising to victory.) I could spend hours just running these simulations to see how eras compare, and I love seeing the stat comparisons in such stark terms.

The new Challenge Mode offers players a chance to involve themselves more fully in the game proper. Gone is the ability to long-term simulate games, and certain achievements can only be collected by playing through a full game. However, this enables online tracking of your season, which can be compared with other players’ results around the world.

The simulations in this game are as near to perfect as they can be. The players play as you’d expect, based on their stats, and outliers only arise from perfect conditions for them to do so. I love how the tweaking of philosophy for your coaching style plays out in the game, both in your actions and in the general AI actions of the players.

The layout for this latest OOTP game is basically the same as it always has been, but it is clean, sleek, and easy to navigate. The in-game experience has been enhanced greatly, with some final success on a 3D mode, showing the action of the game with very rudimentary but full animations. It comes out looking like pegs from “The Game of Life” playing on a photo of a stadium, but with a game like this, that is actually something special. I love how accurate it is.

Beyond just the MLB and its minor and historical leagues, the game includes every imaginable league from around the world. Mexico, Japan, China, and many other international leagues are represented in the game, only lacking in having generic logos in the place of any actual logo. However, a little customization could solve that.

Out of the Park Baseball 18

Out of the Park Baseball 18 is just another fantastic entrant into the game’s series and is perhaps the best-received new release in years. Clean, sleek, accurate, and easy to learn and navigate, OOTP 18 gives players ultimate control over their team, in any form, year, or league they choose. The inclusion of new leagues, new features, and the all-new Challenge Mode enhances a game I already consider the capstone of the genre. A must-own for any sport simulation fans.

Patrick Rost has been with Gaming Trend since 2013. At first focused on sports coverage, Patrick has gone on to cover a wide range of games and other products for the website. Outside of Gaming Trend, Patrick writes and records music, grinds perpetually in Elder Scrolls Online (PS4), and lives day to day with his two dogs, Bob and Stella.
Related Articles: Out of the Park Baseball 18
Share
Tweet
Share
Submit