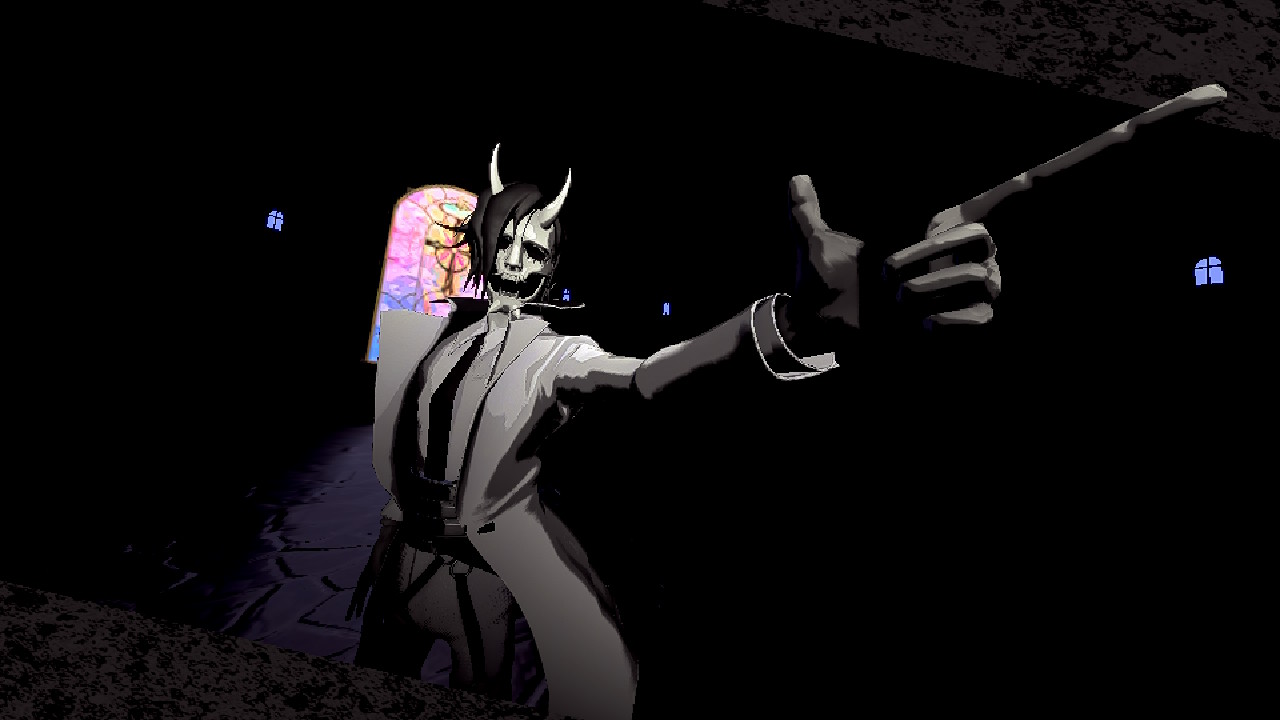 Heaven has been invaded by demons. To combat this, each year the Believers invite sinners from Hell to their paradise for the 10 Days of Judgment. Over the course of these ten days, these sinners, called Neons, kill demons in a contest with the highest ranking Neon earning a year’s stay in heaven. This is White’s first year participating, though his case is a bit different – he can’t remember anything about his life. Other Neons seem to know him all too well and something about Heaven seems off, can White uncover his past and the secrets of paradise? Or will he get himself killed again in the process?

Neon White is a bit difficult to categorize. It’s part first person shooter, part platformer, and part visual novel. At the start of each day, you’re free to explore the hub through a menu to speak to other Neons and Believers before you head off to your next mission. You can give gifts to important Neons and some Angels like Red, Yellow, and Violet to get closer to them, unlock more dialogue scenes, side quests, and memories from your past with them.

The characters are fun to get to know and the writing is incredibly sharp. There’s a ton of humor, even nods to contemporary memes that somehow don’t feel out of place, but the game also knows when to punch you in the gut with a sad or shocking story moment. The overall plot can be predictable, but that’s not exactly a bad thing when the writing, characters, and voice acting are all so strong. We’ve got heavy hitters like SunWon Cho and even Steve freakin’ Blum who each manage to walk the line between that edgy 00’s emo aesthetic and a take nothing seriously attitude, all bolstered by some genuine pathos and kindness at the center.

When you’re not being charmed by the characters, you’ll be bustin’ caps in demons at blistering speed all across the heavens. White can move at a nice clip with the left analogue stick and jump with ZL, but the rest of your moves come from weapon cards you pick up in each stage. You always have your Katana card, but it’s not all that effective at killing. One of the first cards you’ll encounter is Purify, a rapid fire machine gun. You can fire with ZR, but their real use comes in their discard abilities with R, for example Purify allows you to throw a bomb that can destroy groups of demons and even launch you into the air. There’s a good amount of weapons to discover, like a shotgun that turns you into a fireball for a dash or a rocket launcher that can grapple certain surfaces. 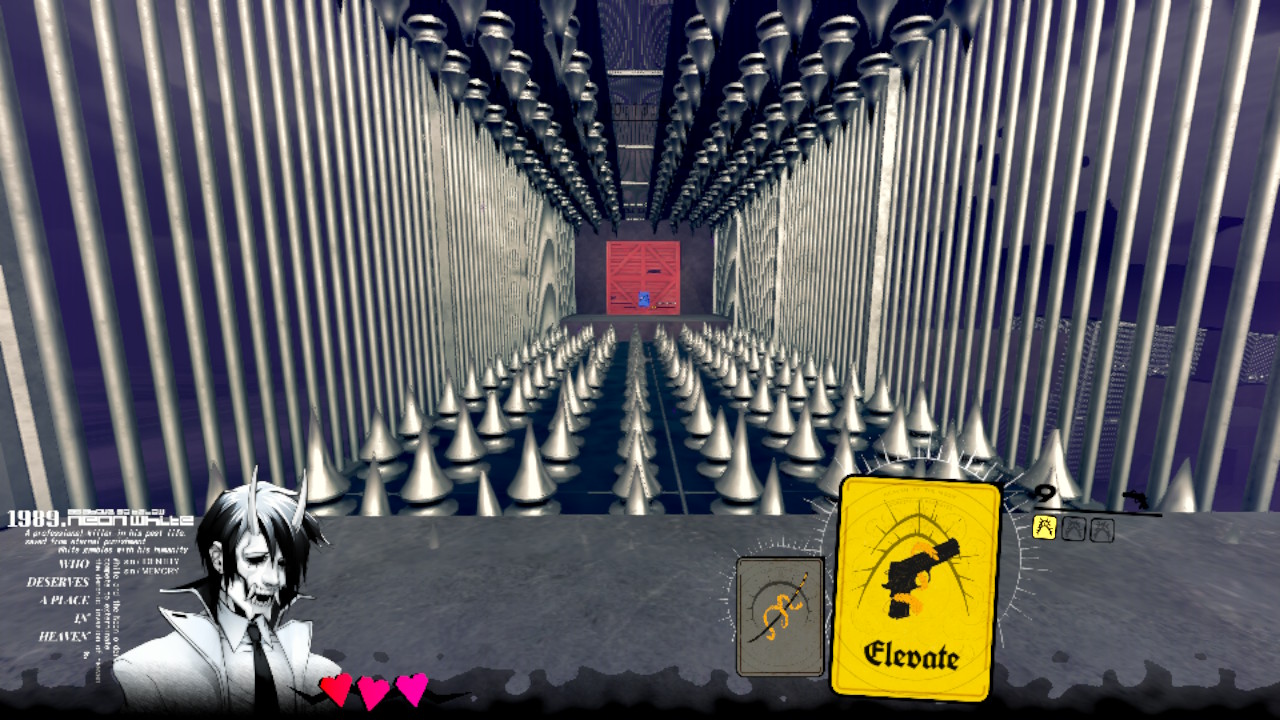 Each and every single one is incredibly satisfying to use and they all get equal use throughout the game. Your goal in each level is to kill all the demons and reach the goal as quickly as possible, and all the weapons encourage that gotta go fast mentality with their simplicity by allowing you to assess each obstacle in a split second. The game doesn’t ask for perfection either, you can get a gold medal or the coveted Ace medal oftentimes on the first try even when making a few mistakes along the way. While only the top two medals will increase your rank, all will allow you to progress to the next level and increase your insight into the stage.

Each rank of insight grants you some bonuses in the stage, like some shortcut hints or the ability to find gifts for your friends. It doesn’t so much as demand mastery, but instead encourage it and point you in the right direction. As you slowly build up your skills, you’ll be able to see the optimal paths naturally in later levels. Even if sometimes it can feel like you’re just jerry rigging solutions, it all still feels intended somehow, leading you to naturally want to shave just a few more seconds off of your time. Neon White is speedrunning’s gateway drug. 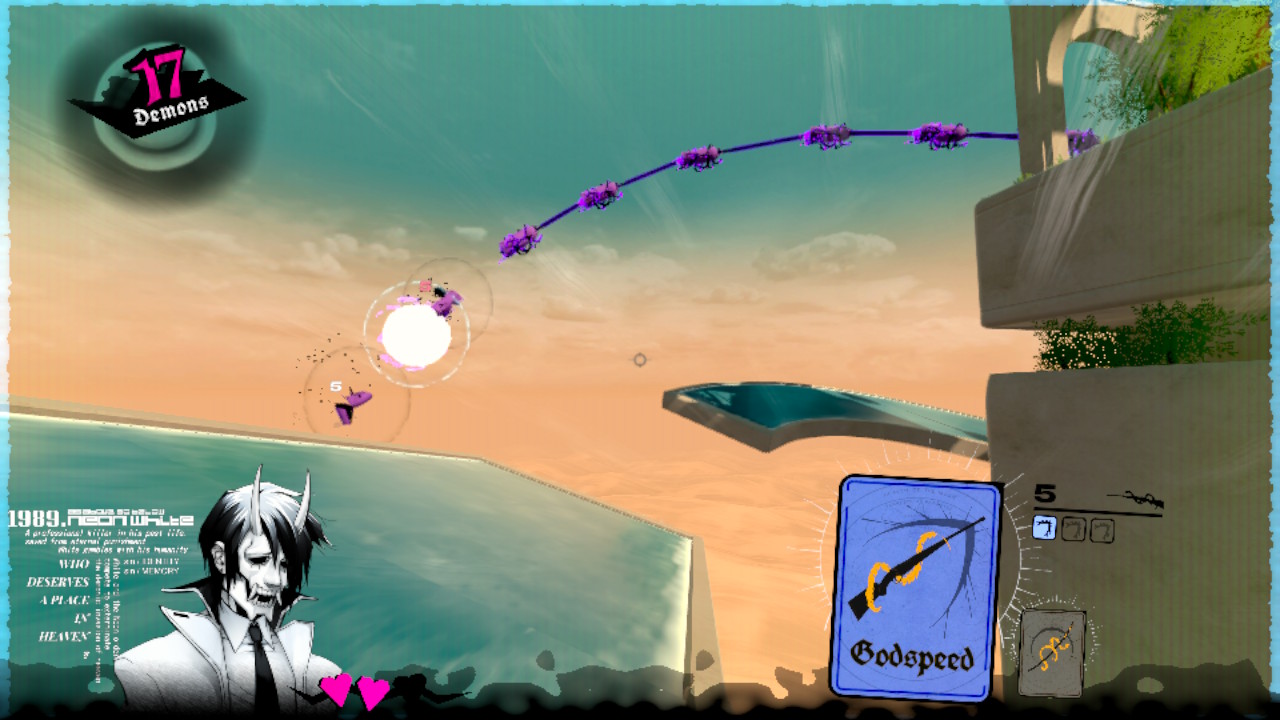 The kindness at the core of the story is also present here. You can only see where you stand in online rankings once you have the Ace medal, encouraging you to not compare yourself to others too much, which is a nice touch. I don’t care too much about rankings, but I still want to see everything the game has to offer and master it to beat my own times.

It also helps that Neon White looks and sounds heavenly (pun intended). The 3D levels use hard lines and stark colors to remain easy to parse, but each world has some color cohesion that makes it memorable and allows the 2D demons to stand out since they consist of mostly black and darker colors. The music you’ll be listening to as you jump and shoot really helps put you into that flow state too, with fast beats that almost make this feel like a techno rhythm game. 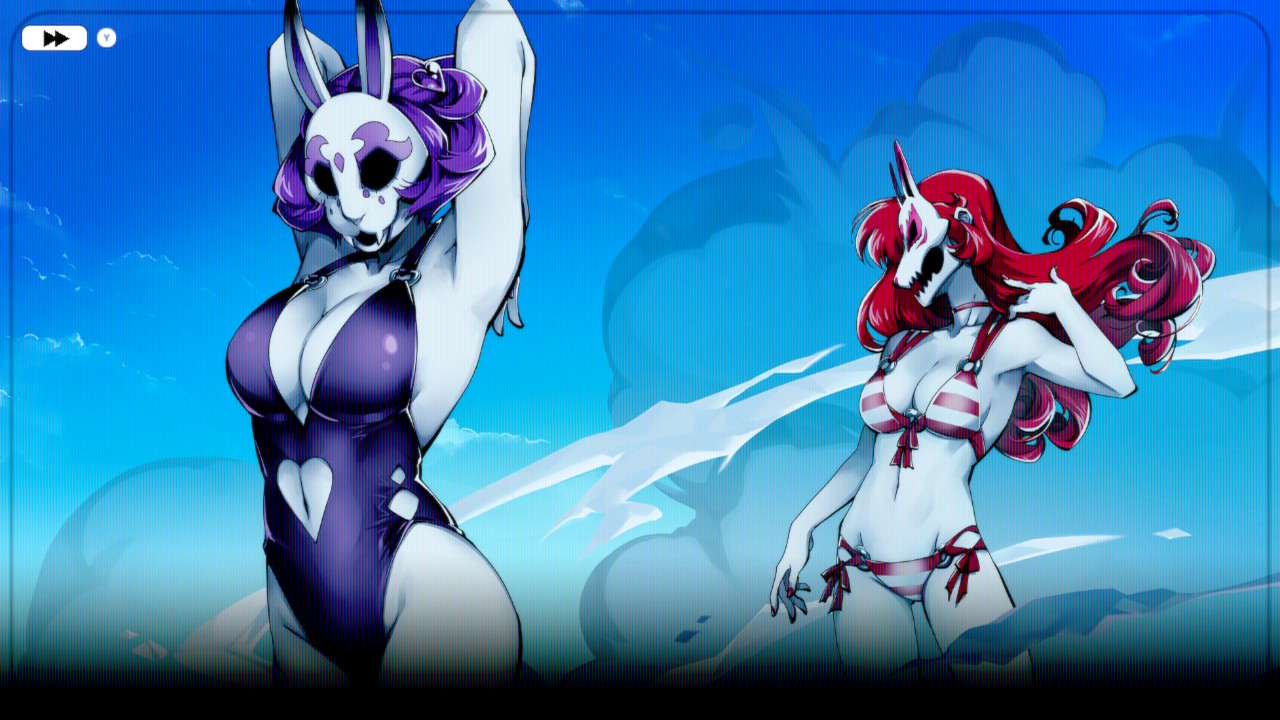 Outside of missions, you’ll be looking at a lot of lovely 2D art in the visual novel segments. Character portraits for Neons usually consist of only black, white, and whatever color the character is named after, while Angels look like adorable cartoon cats because you literally cannot comprehend their true forms. It can feel a little scattered, but somehow the art style manages to come together

Sadly Neon White isn’t perfect. While it is pretty damn close, there were more than a few times where I couldn’t immediately figure out where to go the first time through a stage. The game especially has an issue with requiring you to face a certain direction when being launched into the air by an explosion and there’s nothing to indicate this. It really breaks the flow, along with some just long enough to be slightly frustrating loading screens on retries. The biggest issue I have, however, is with the boss fights. While there are only three in the game, they’re way too long for a game that’s both easy to die in and without checkpoints. Most levels last less than a minute, while the final boss fight took me almost three minutes once I finally got it down after more than a dozen tries. Still, these are small blemishes on an otherwise incredibly tight package that I highly recommend.

Neon White is a ballet of bullets and death that always leaves you wanting just one more run. There are a ton of levels and powers to master, along with a witty and sincere story at the center. One of 2022’s best games.

David is the kind of person to wear his heart on his sleeve. He can find positives in anything, like this is a person who loved Star Fox Zero to death. You’ll see him playing all kinds of games: AAAs, Indies, game jam games, games of all genres, and writing about them! Here. On this website. When not writing or playing games, you can find David making music, games, or enjoying a good book. David’s favorite games include NieR: Automata, Mother 3, and Gravity Rush.
Related Articles: Indies, Neon White
Share
Tweet
Share
Submit