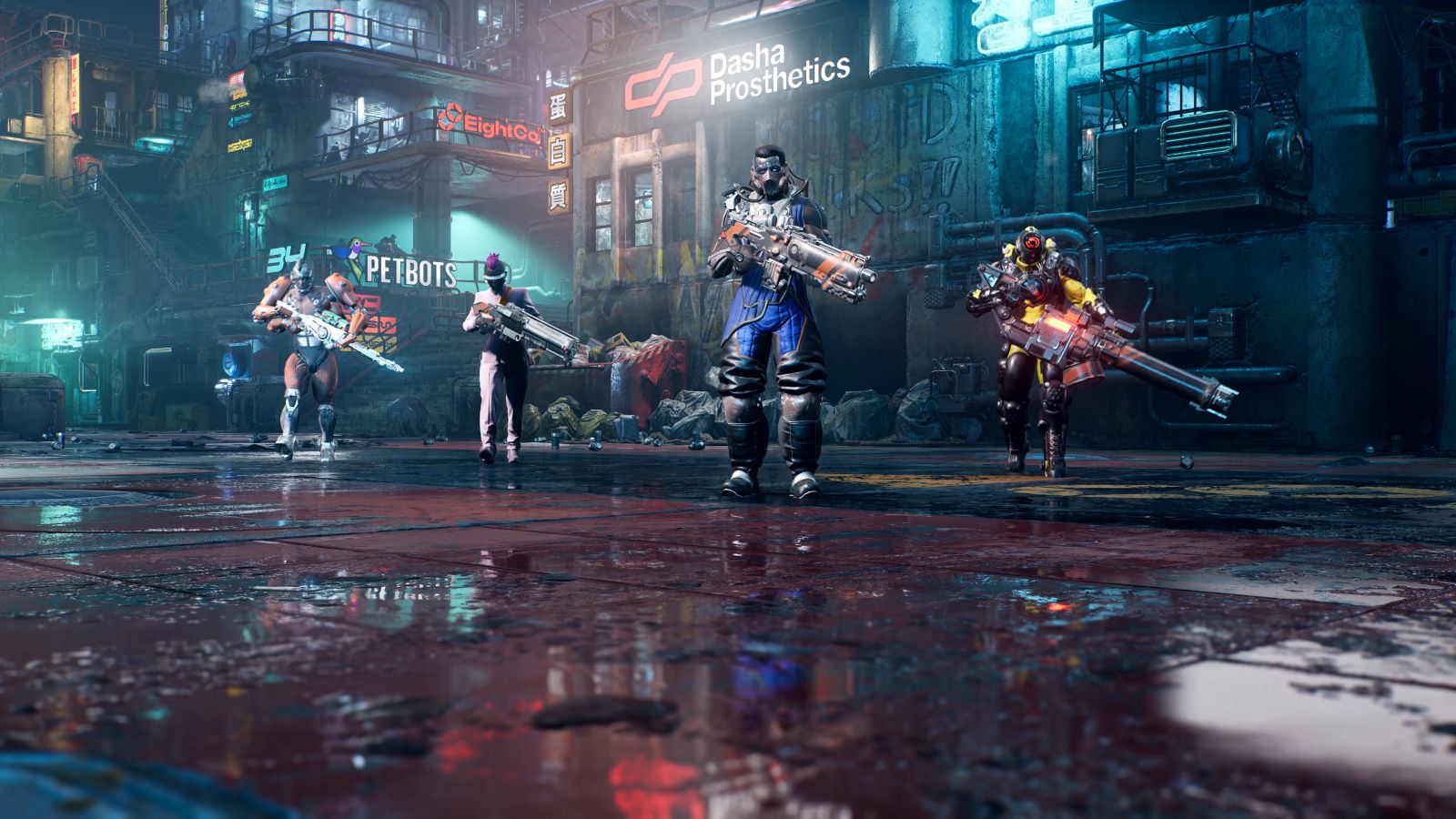 In the future, massive megacorps own everything, and everyone. On planet Veles, they’ve built a massive densely populated arcology filled with indentured servants. Looking for a chance at something better, you have saddled yourself with debt up to your eyeballs. Unfortunately for you, The Ascent Group, the massive megacorp driving commerce on this planet, just collapsed. As the power vacuum attracts the dregs who want a shot at seizing control, you’ve got the simple task of finding a job.

First and foremost, the Ascent absolutely nails the cyberpunk aesthetic. With neon, far too much rain, body mods, and urban sprawl as far as the eye can see, developer Neon Giant delivers the perfect blend of 80’s cyberpunk, twisted science, and anime aesthetics. The city is stacked high, but you can see the slipshod and haphazard way it was cobbled together, managing to look futuristic and yet somehow like stacked remnants of something from the past. Advertising for various noodle shops, something akin to energy drinks, biomedical services, and more blanket the space with pink and blue neon as flying cars zip by. It’s jarring to see a massive golden Buddha that acts as an entrance to a cybernetics clinic, and I absolutely love it. 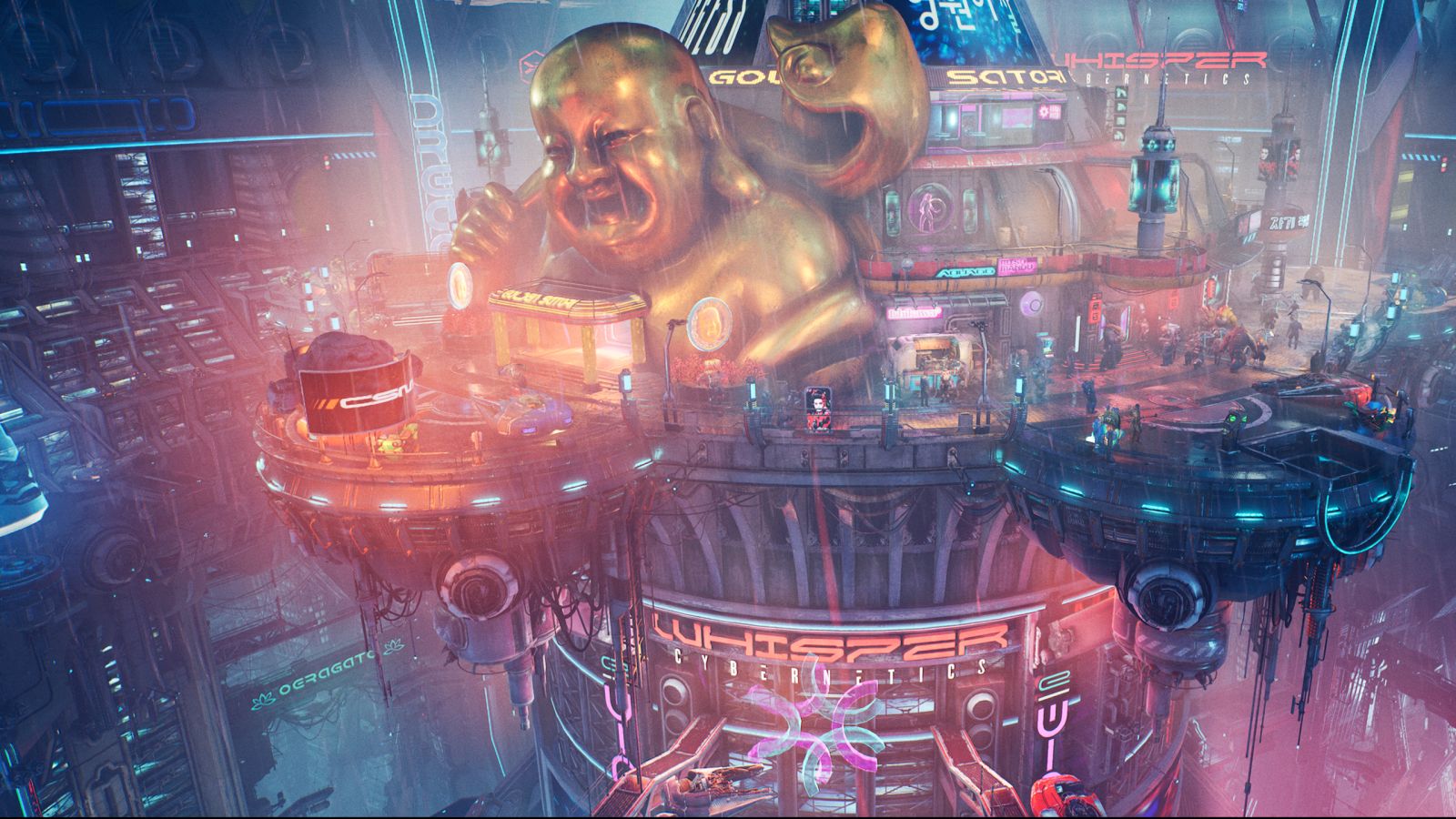 At its heart, The Ascent is a twinstick shooter with a few twists. Typical twinstick titles have you dodging and weaving as a flurry of bullets race towards you, using the environment and your own personal skills to stay safe. That’s a factor here as well, giving you a quick dodge roll with the A button (with a cooldown), and enemies from every corner. The environments are packed with debris, walls, and more — and that’s where the big change hits.

The Ascent features a fairly unique cover system for this genre, allowing you to take cover and then fire over the top of anything you can put your back against. It keeps you relatively safe, though the enemies here are thick as thieves, so that safety is fleeting at best. The game can be played solo which makes cover a lot more necessary, though even more temporary as miscreants can come at you from all angles. It makes for a more engaging and nuanced approach to this style of gameplay, even if just a little bit. That said, you will spend a lot of time tilting your thumbstick away from enemies, trying to kite them to keep them at bay while they swing pipes at your head or launch mortars at your feet.

To meet the challenge of the ever-increasing threat, you’ll need some upgrades. As this is a cyberpunk title, that can be guns, but it’s more often than not things you’ll jam into your meaty fleshy bits. Cyberdecks are an implanted computer that allows you to do various things like hacking doors or boxes, opening new paths, and breaching vending machines for health-buffing and healing loot. You’ll have to seek out some of the coolest places in the game to get these upgraded and kitted out — I’m looking at you Coder’s Cove.

As you level up you’ll get points that you can spend on an array of skills and attributes. They are fairly straightforward, but when a split second can make the difference between life and death, they matter. For example, Balance raises your stun resistance and helps you move more quickly with heavy weapons. Weapon Handling is tied to how fast you reload and swap between weapons, and Critical Hit Rate is how often you’ll score a critical shot. Straightforward so far, but finding the right balance as the difficulty ramps is the challenge. Figuring out which weapons and skills you like, and then modifying your body to compliment them is something you’ll likely perfect on a second run. 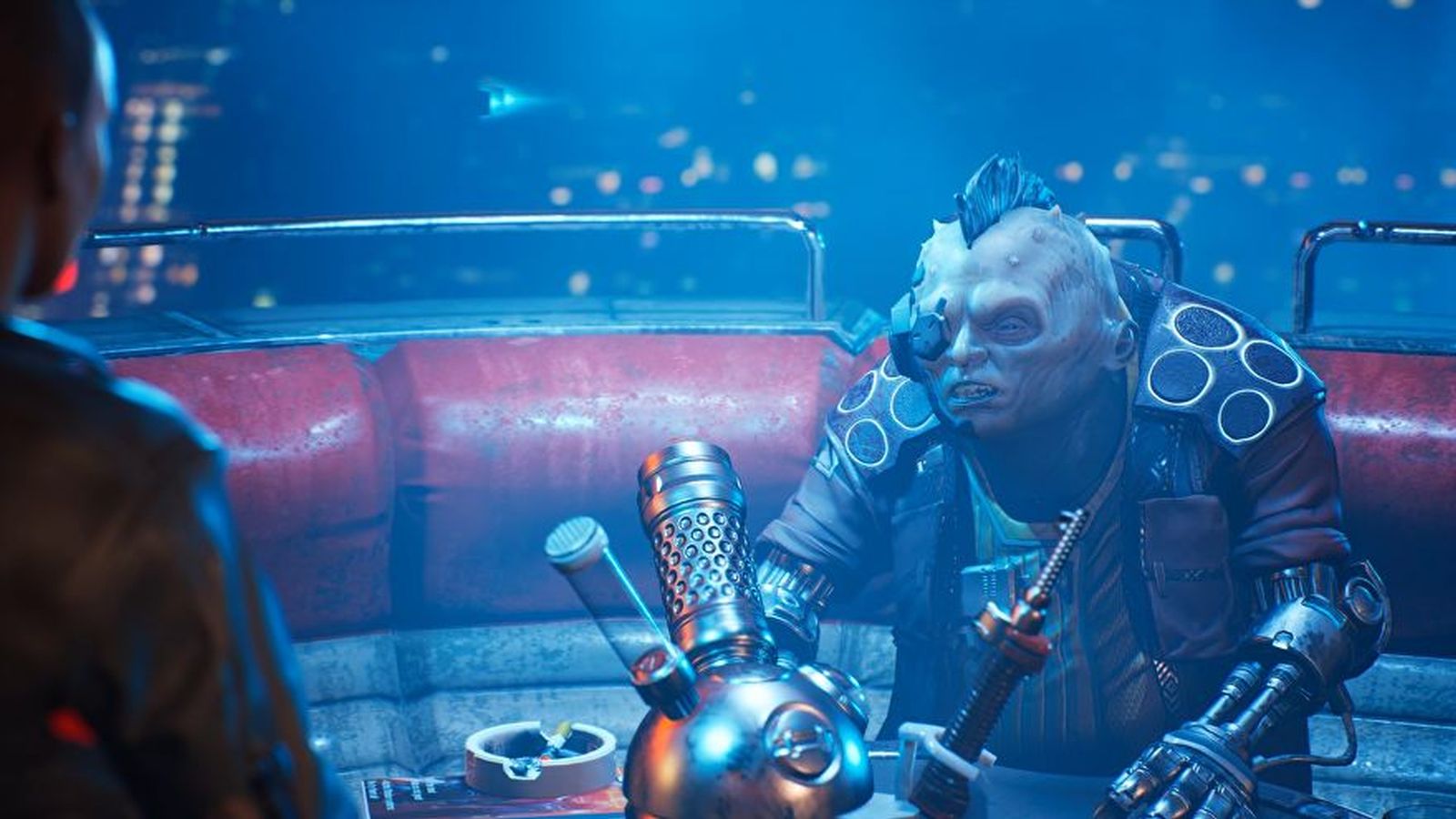 Beyond skills, there are also augments to consider. With four total slots to fill, there are a frankly dizzying amount of goodies to choose from that drastically change how your character fights and moves. A number of these can really help you control the fight, such as Rat Bite which charmes some mobs to fight on your side, or Spiderbots which will drop serious AoE firepower on your foes. Neutron Beam is just pouring pure energy directly at your enemies, but you can’t underestimate a good old fashioned power punch to blast baddies backwards. No matter your fighting style, there’s a build in here for you somewhere.

There’s a whole lot of foes eager to end your run in The Ascent, so you are gonna need guns — lots of guns. There are quite a few to play with, and unfortunately I don’t have a whole lot to say about most of them. There are a handful of weapon stats that’ll bump up, but in such a marginal way that it becomes hard to really care about most of them. That said, there are a few named weapons that are a highlight when you can find them. The Astrosmasher is an automatic rocket launcher that you’ll pick up from an early boss — here’s where that balance score comes in. The EBR Enforcer is an energy rifle that fires homing lasers, so it’s an easy staple of my death dealing meal. Like the augments and stats, there’s a weapon for you in here somewhere — I just wish the more run of the mill stuff in between the named highlights were more meaningful. 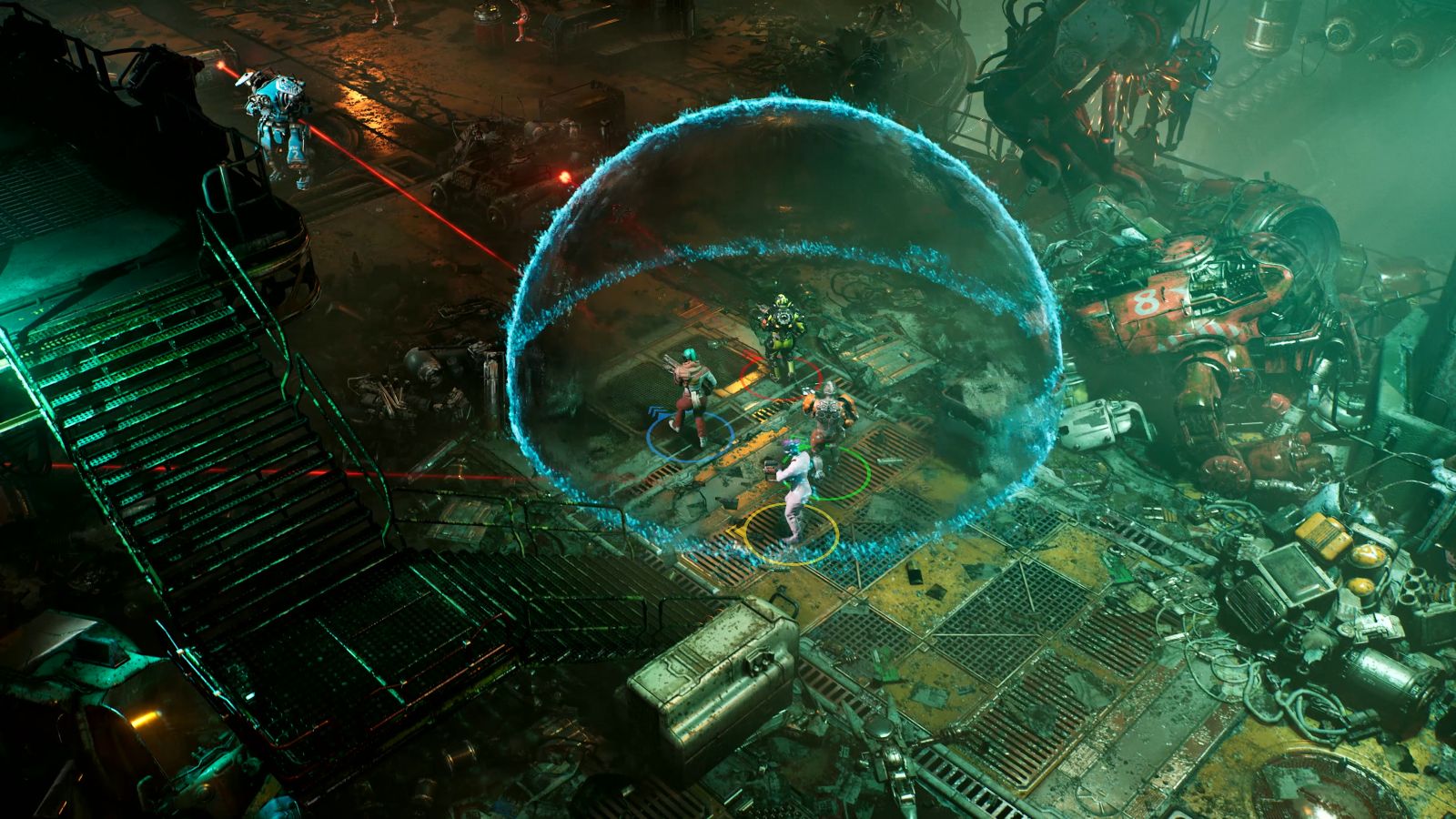 The Ascent will take you around 15-20 hours to complete, depending on how many of the 20 side missions you tackle for additional XP and loot. There are some pacing issues with those hours, with the first few hours being a bit of a slog, and often just getting to your objective is just a lot of eye-poppingly gorgeous running and running and running with little but meat between you and the objective. The ending is a bit of a struggle as well, throwing massive health bars and familiar faces at you to pad out the run time. Still, what’s in the middle is the warm gooey center that kept me interested in what the game had to offer.

While The Ascent is playable solo, and it works quite well, it’s absolutely built for cooperative play. Bringing a friend along for the ride allows you to construct complimentary builds and focus on different augments and weapons, and that can make some of the more brutal bosses a little more reasonable.

I do have to mention that, as a single player game, I had a completely bug free experience. When I added an online friend, though, that’s when the problems started. Couch co-op works without a hitch, but adding the Internet into the mix proves to be a problem. I’ve had my co-op partner get stuck and not be able to move or attack, crashing and then not being able to rejoin, and some desync issues.

I ended up delaying my review for The Ascent while I waited for the day 1 patch that would enable DLSS and DirectX 12. I’m glad I did, because with it enabled I went from inconsistent framerate and choppiness to buttery smooth framerates and absolutely gorgeous lighting and particle effects. Battle scenes explode with sparks and gunfire as neon streaks of cars whiz by in the foreground. This is a fully realized world, and it’s been lovingly crafted and populated to create a congested techno feel that brings it all to life. 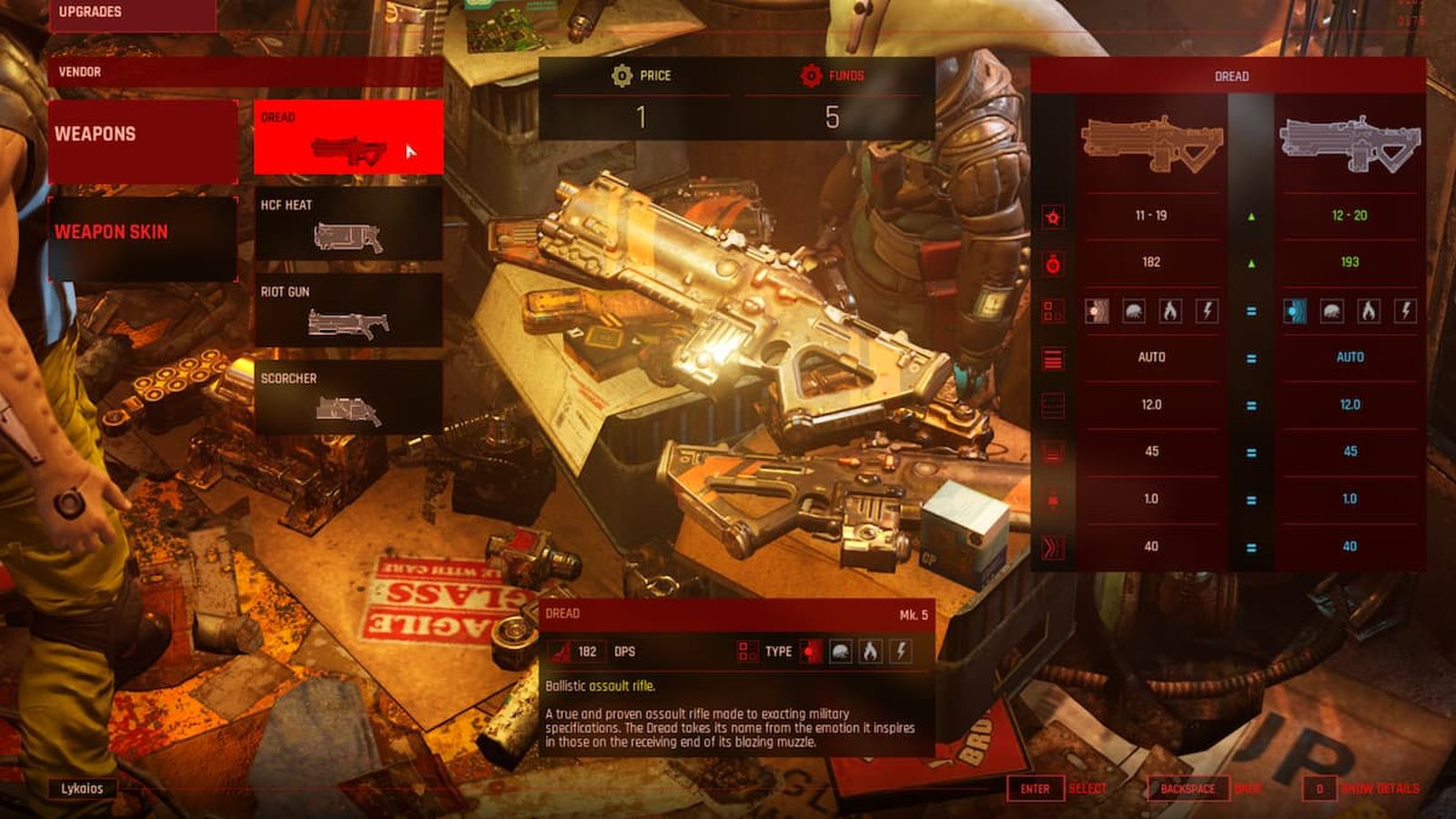 My only real complaint beyond the multiplayer bugs is that the difficulty in The Ascent is all over the place. Some side content is over so fast and is such a breeze, followed by other missions that are such a beating that you’ll be seeing that plain black loading screen a little more than too often. It’s not going to ruin the experience, but some difficult portions could use some smoothing.

Capturing the cyberpunk aesthetic perfectly, The Ascent is a fantastic example of twinstick shooters with a few tricks of its own. There are a few rough edges, especially with online multiplayer, but the RPG elements and gorgeous graphics and voice work more than keep you locked into this neon soaked universe.

Ron Burke is the Editor in Chief for Gaming Trend. Currently living in Fort Worth, Texas, Ron is an old-school gamer who enjoys CRPGs, action/adventure, platformers, music games, and has recently gotten into tabletop gaming. Ron is also a fourth degree black belt, with a Master's rank in Matsumura Seito Shōrin-ryū, Moo Duk Kwan Tang Soo Do, Universal Tang Soo Do Alliance, and International Tang Soo Do Federation. He also holds ranks in several other styles in his search to be a well-rounded fighter. Ron has been married to Gaming Trend Editor, Laura Burke, for 21 years. They have three dogs - Pazuzu (Irish Terrier), Atë, and Calliope (both Australian Kelpie/Pit Bull mixes).
Related Articles: the ascent
Share
Tweet
Share
Submit