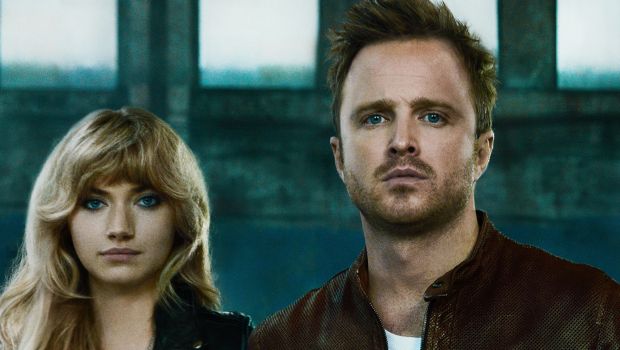 We don’t write a lot of movie reviews here at Gaming Trend, but when games cross over into the real world we take notice. Electronic Arts looked into their vast array of properties and pulled out one of their best and brightest to bring to the silver screen – Need for Speed. Teaming up with DreamWorks pictures, their aim was to bring the breakneck pace of their flagship racer to life.  They succeeded.

I’m going to start this review backwards from what you might expect. Rather than going over the particulars of the plot, I’m going to tell you a little bit about how this movie was made. Courtesy of a nine and a half minute vignette entitled Capturing Speed: Making an Authentic Car Movie, Director Scott Waugh and his team talk about the methodology in building an authentic and incredible stunt-based film. Waught wanted to use nothing but in-camera shots, using real cars, and real sound, to build an authentic racer, but there is no way they could destroy vehicles that are either near-unique or worth a quarter of a million dollars. Instead they built custom cars and skinned them to look like the genuine article. This allowed them to build camera rigs to put the audience in the vehicle and right in the middle of the action. This unique filming process, the training of the actors in the film, and Lance Gilbert’s amazing stunt team, come together in this behind-the-scenes that reveals that this is not a CGI film – everything you’ll see on the screen is real. Many of us own a lot of movies, but it’s not often we watch the making-of pieces – you’ll want to watch this one after you finish the flick.

The general beats of Need for Speed surrounds street mod mechanic Tobey Marshall (played by Breaking Bad alum Aaron Paul) and his amateur racing team finding themselves down on their luck financially. When an opportunity to partner with a lecherous but wealthy racer named Dino Brewster (Dominic Cooper) to build an incredible supercar goes sideways, Tobey finds himself framed and on the wrong side of the law. It’s a fairly predictable plot, and much of it exists to show off the drool-worthy supercars, but knowing that all of the stunts were done for real takes this entire movie up a notch.

As the movie progresses, the team is given a chance to compete in a high-stakes race that’ll offer a chance for Marshall to take down Brewster using an incredible Ford Shelby Mustang GT500 sporting over 900 horsepower and a signature sound that’ll make you smile every time she roars. The only hitch is that he has to get across the country from New York to California in record time. Again, it’s all straight out of a lightly-penned videogame, but it makes for as good a reason as any to roar across the United States.

By the end of the two hour run time, you’ll have turned off your brain and settled into just watching the film for the bombastic hair-raising action. The supporting cast turns in decent performances without making this feel like a videogame or a photocopy of the venerable Fast & Furious franchise. The generic revenge main plot sits sidecar to the race, and few twists change up the ghost line on this one, but that doesn’t stop it from being a solid romp heavily influenced by the likes of Bullett and Death Race.

Beyond the movie and the aforementioned making-of piece, there are five more short vignettes and a trailer for Need for Speed Rivals. The Circus is in Town gives a 12 minute behind-the-scenes journey on the process of filming this bi-coastal romp. The Sound of Need for Speed is an eye-opening look at the ear-opening soundtrack and audio effects in the film. Composer Nathan Furst gives us a listen to the over 40 minutes of soundtrack he has composed. Greg Russell and Scott Millan, the Re-Recording Mixers, also show us how they captured that signature sound of the Shelby, as well as the high-tech whistle of speed from the likes of the Bugatti Veyron. Music and sound recording are likely aspects you don’t think about when you are watching a movie, but in a film with this many cars, and the insistence from the director that everything be done with real vehicles and without using simulated sound, you have an incredible landscape of audio flavor.

Ties that Bind is a 12 minute showcase of Mickey Gilbert, veteran stunt driver, and his family of incredible stunt coordinators that go back generations. They have showbiz in their blood, and movies like this show their craft in all of its glory. Gilbert and Stunts Unlimited provided the real car gags that make this movie feel like it’s CGI, but incredibly it somehow isn’t. This piece gives us another look at the tight-knit group that brings the signature flips, jumps, and crashes to life. It does overstay its welcome, but it does provide a few more insights into the more dangerous stunts in the film.

The final two pieces could have easily been combined – Deleted Scenes, and Maverick and Monarch Outtakes. The four deleted scenes were appropriately cut as they really added nothing to the film, but Maverick and Monarch’s outtakes (the comedic stylings of Scott Mescudi and Michael Keaton, respectively) give us some of the deleted ad libbing that didn’t quite make the cut.

Need for Speed, at its core, knows what it wants to be. While the plot may fall a little flat, this movie is about cars going very, very fast. Vehicles like the Veyron, Koenigsegg, Shelby Mustang, GTA Spano, McLaren P1, and Saleen S7 are poetry in motion with stunts from the likes of Top Gear co-host Tanner Foust and the Stunts Unlimited Team filling each second with eye-popping danger. The Blu-ray has a bevy of worthwhile features, with the making-of piece is worth the price of admission on its own. Need for Speed should find a safe parking spot in your home movie library.