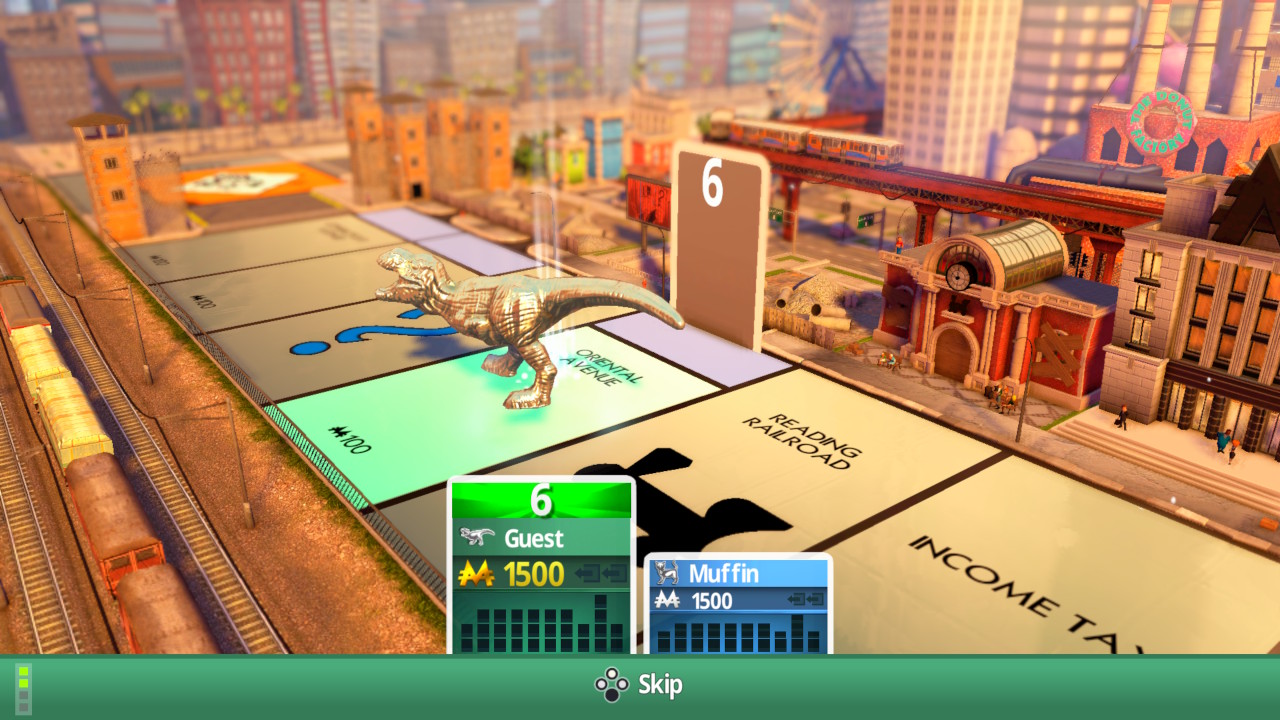 Monopoly has been around for over 80 years. For many, myself included, the goal of the game is less to win and more to cause chaos by preventing the other players from purchasing any of the key properties they need to build their houses. Just as Monopoly is guaranteed to receive a few new special editions every year, a Monopoly game in some form is guaranteed to appear on a console ever since 1985’s release on systems such as the Commodore 64, PlayStation 1, Xbox One, and many more. Finally, the classic dice-rolling, property-snatching board game has arrived on Nintendo Switch.

Monopoly for Nintendo Switch, an almost jaded port of Monopoly Plus (but on that later), continues this tradition by bringing the classic video game board game to a portable device, giving it the potential to be a great game to play with friends on the go.

These are the three main boards, complete with their own names for properties.

When you start the game, you’re given the option to play Monopoly locally, online, or view your objectives. When you select to play Monopoly, you can choose between living boards or classic boards. These boards vary cosmetically and change the name of the properties in some cases, but are laid out exactly the same. Living boards contain 3D imagery and the property names will vary between them, but there aren’t any differences besides aesthetic. Classic boards are flat boards without any wacky buildings. It’s truly a virtual monopoly experience. However, there are only two boards to choose from: Classic Board and Rabbids Board. The only difference is that the Rabbids Board contains Ubisoft’s lovely rowdy batch of characters, the Rabbids, on almost every card and space. As far as boards go, these feel very limited and it’d be nice to see more variety.

Take that, you metallic idols of capitalism.

The game plays exactly how you’d expect it. It’s Monopoly, you roll dice to go around a board and snatch up properties before your opponent can. You can either follow your piece at an angle or have a flat view of the whole board. Watching these pieces bounce around brought an ounce of joy, but not as much joy as violently throwing the dice at the pieces on the board to knock them over with no consequences.

The real game is convincing your opponent to sell you that piece of property you desperately need.

In addition to different goals there is a speed die option, which allows the players to move quicker, thus increasing the speed of the game, and various house rules. These house rules can be something as simple as all fines and taxes going to the free parking space, players earning $1,000 for rolling snake eyes, and creating a “King of the Hill” game by not allowing players to collect $200 for passing “Go.”

For some demented reason, Monopoly for Nintendo Switch does not allow you to mix house rules or goals. You can’t adjust any of the rules, nothing is customizable, and you can only do one thing at a time. It would be nice to play Monopoly with both the ability to collect money from Free Parking and prevent players from collecting $200 when passing “Go,” but this isn’t an option here. To make things worse, you can’t select to play with the Speed Die and any of these options either.

Oh how I wish I lived in a world where I can play with both the Snake Eyes rules and Free Parking Cash.

There are objectives for players to strive for in the game. Completing these different objectives unlocks different pieces for the players to select, but they are as simple as finishing a game on a certain board. Without trying, you can unlock almost all of the objectives your first few games.

Monopoly for Nintendo Switch is a port of Monopoly Plus with everything unique about the game subtracted. In Monopoly Plus, players had the option to create their own boards using the My Monopoly setting, after they purchased it, of course. However, this feature is completely absent from this version even as DLC. These lack of features are almost insulting as the game offers nothing new from the other versions but costs more than twice as much.

This is more intense than it looks, I promise.

Like Monopoly Plus, there is an option to play online with friends and strangers. However, the lobbies aren’t well populated and getting into a match could take some time. There isn’t even a guarantee you’d be able to finish a match if you’ve started, but the option is still nice.

You gave in too easily, your properties could have become something great.

Monopoly shouldn’t be a difficult game to get onto a console. In this version for Nintendo Switch, the actual game works fine, but there are plenty of questionable designs that prevents Monopoly from living up to its potential.

Monopoly for Nintendo Switch works for being a Monopoly game, but is ultimately a gimped port of a several year old game with features such as My Monopoly missing and questionable design choices such as not being able to mix and match house rules. If you’re looking for Monopoly on the go, it may be better to wait for a price drop.

Sean Anthony likes to combine two of his passions: gaming and writing. Gaming has been a huge part of his life ever since he played his first game as a child, Kirby's Adventure. He aspires to have his name attached to an article that makes the whole world go, "Huh, that's neat, I guess."
Related Articles: Monopoly
Share
Tweet
Share
Submit