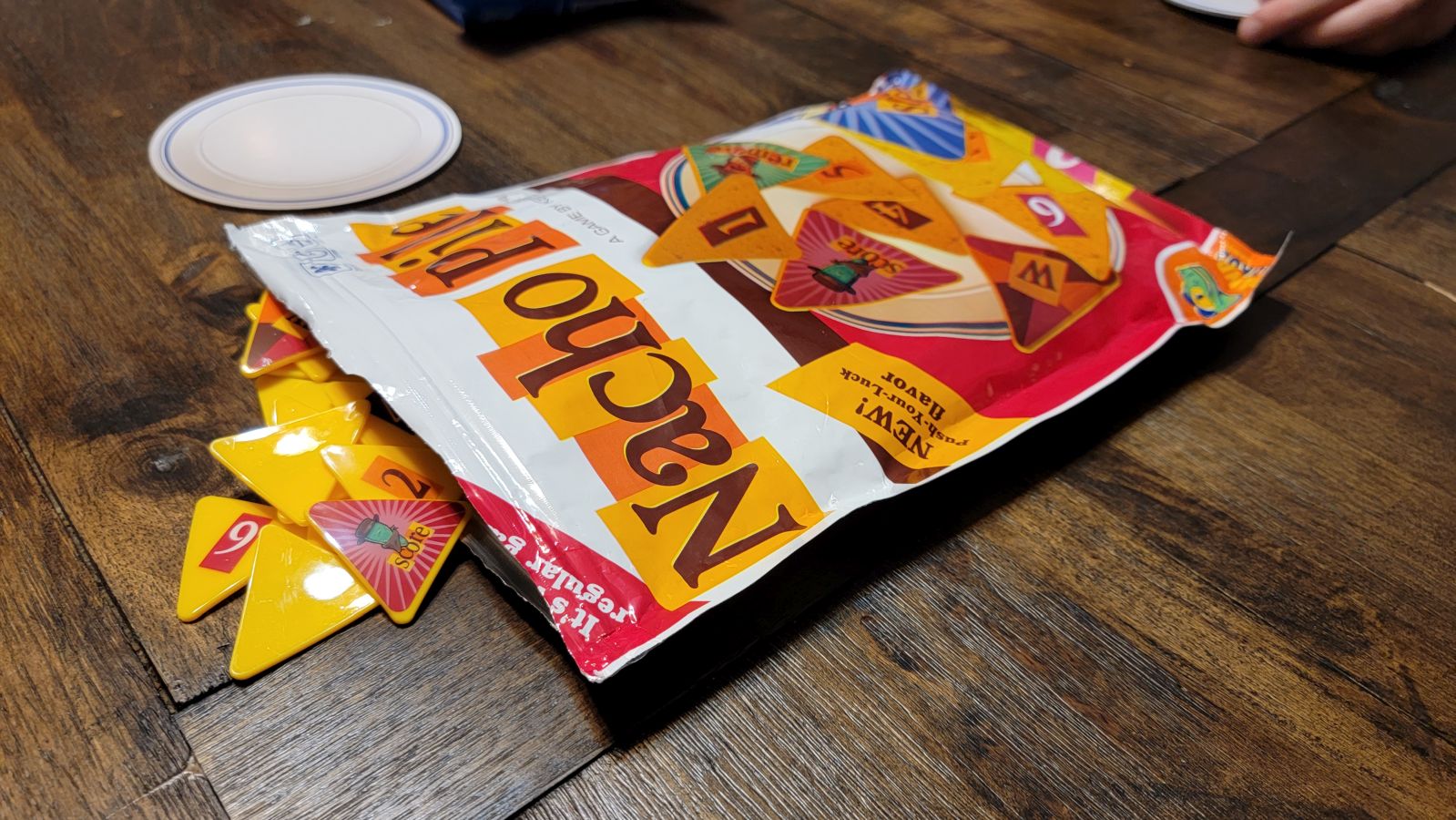 It’s happened – we now have a party game that could easily be confused with the snacks at the party, which may very well end badly if your party guests get too inebriated. But assuming yourself and your guests are able to distinguish between snacks and a game, then Nacho Pile may just find a place in your game night rotation, even though it never really becomes more than a passing distraction for 20 minutes or so. Though, to its credit, it never really strives to be much else.

Jokes about confusing the game for a snack aside, the packaging is really quite ingenious and good for a laugh and as a novelty piece. The game comes in a bag designed to look similar to a Doritos bag that can be snap sealed. Inside the bag are 54 chips, six cardboard plates, and the rulesheet. The game can be played with two to six players and normally lasts around 20 minutes. I’d highly recommend only playing with individuals old enough to understand that it is a toy as the pieces could be a choking hazard for younger children. Prepping the game is easy as you simply place a plate in front of each player and empty the bag of everything aside from the chip game pieces. The person who most recently ate nachos will take the first turn. 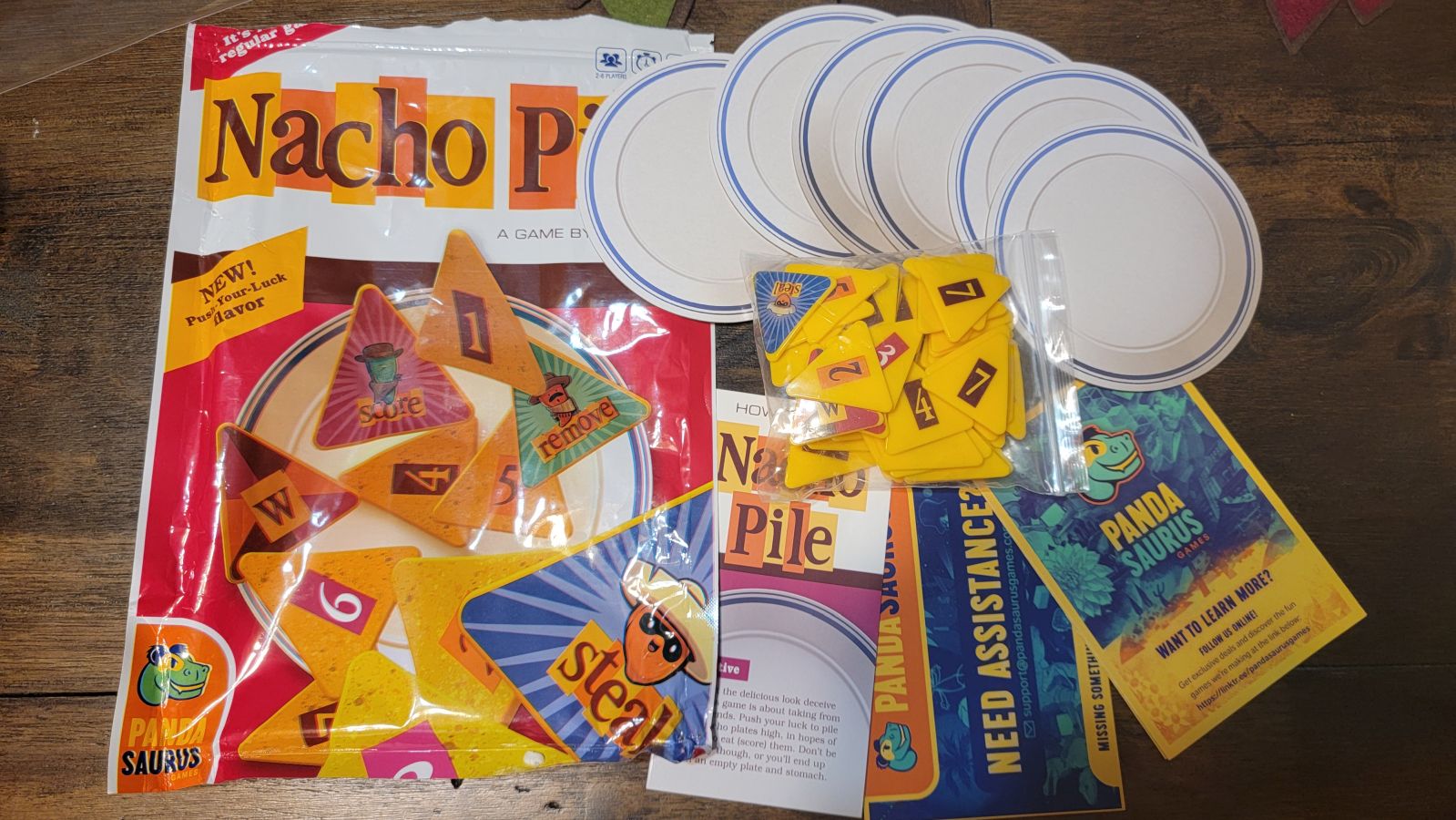 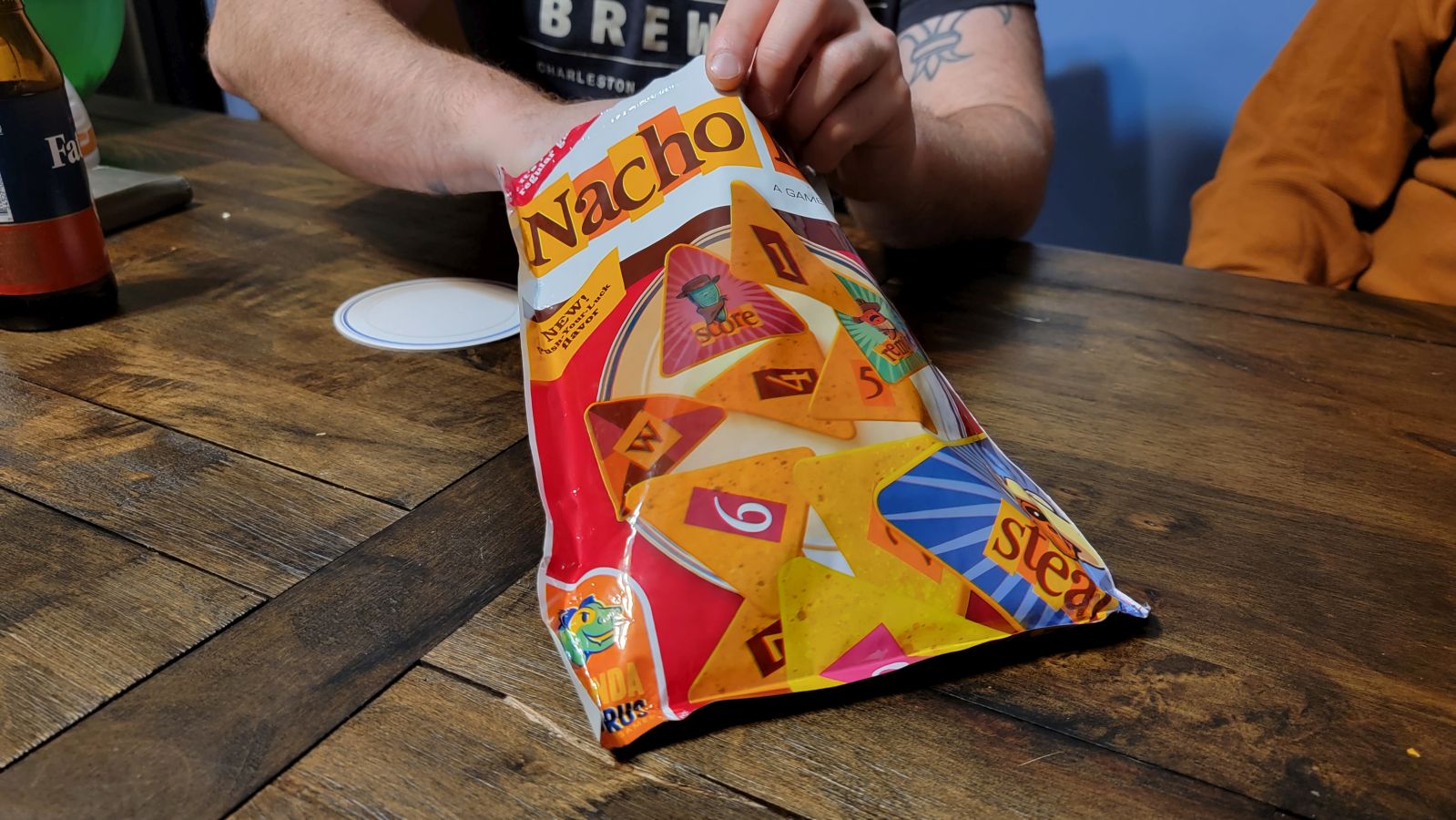 At its core, Nacho Pile is a game based around pressing your luck. With each turn players will draw one chip at a time out of the bag. Each chip will either have a number between one and seven on it or will say wild, steal, score, or remove. Players can draw as many pieces as they wish, but if they draw the same type of chip twice then they bust and must return all the chips drawn to the bag. If the player decides to stop drawing before busting, then they add those chips to their plate. Any other player who has a chip with the same numbers on it as the ones drawn by the active player will have to surrender those chips to the acting player. Wild chips can serve as any number, but the player must announce which number it is upon drawing. The steal chip allows the player to steal any number pile from another player while the remove chip allows the player to remove any chip pile from another player and place those chips back in the bag, and the score chip allows the player to choose one of their drawn numbers and immediately take all the chips of that same number from the other players and place them on their plate. Once a turn is finished, play moves to the player on the left.

Nacho Pile is mostly luck driven, with little strategy involved aside from learning when to stop and making the best use of wild chips to steal the largest piles from other players. Otherwise, the game continues until one chip remains in the bag. When the last chip is drawn, the player with the most of that number wins, or in the case of a tie, the player with the most chips on their plate wins. 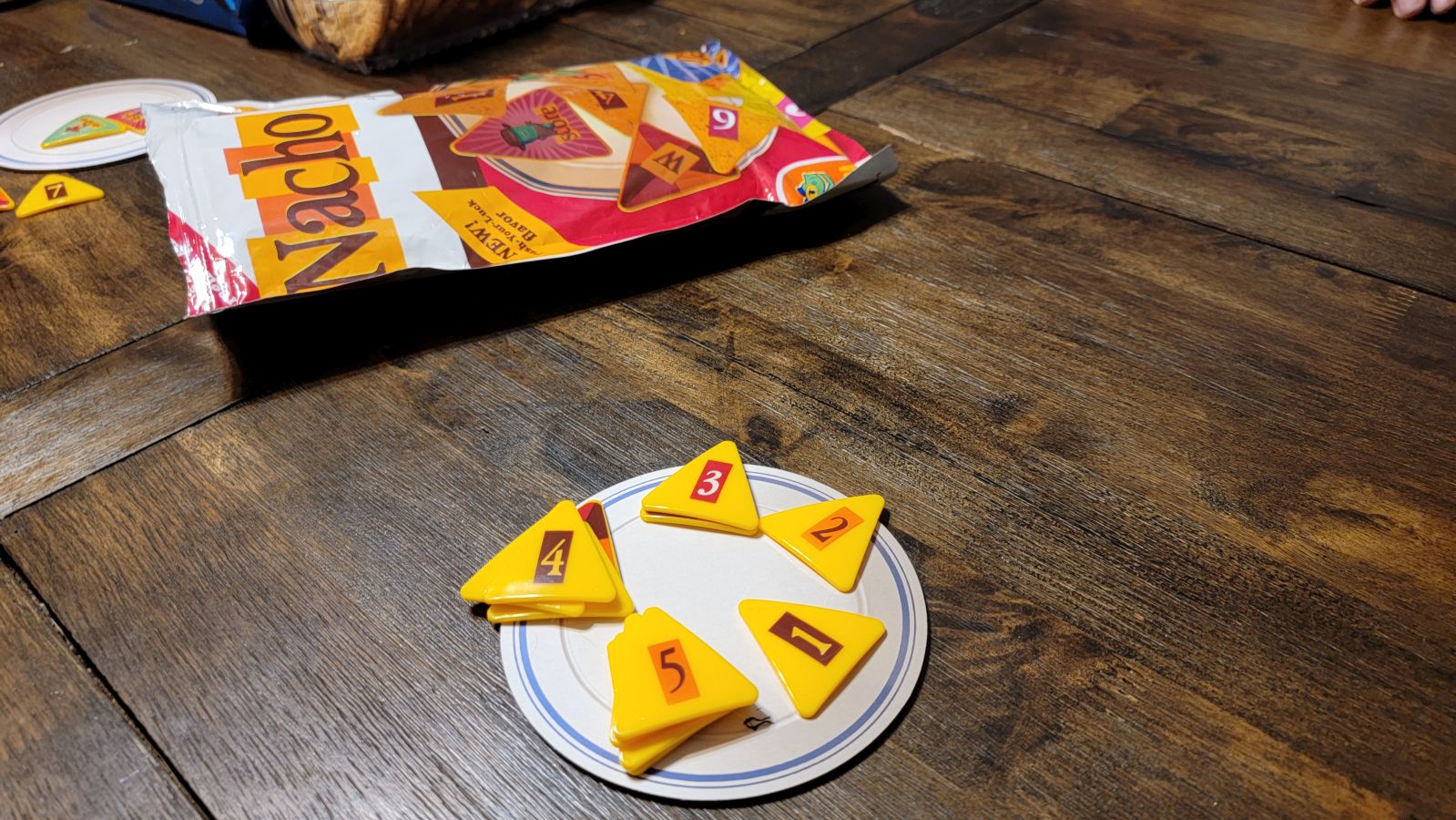 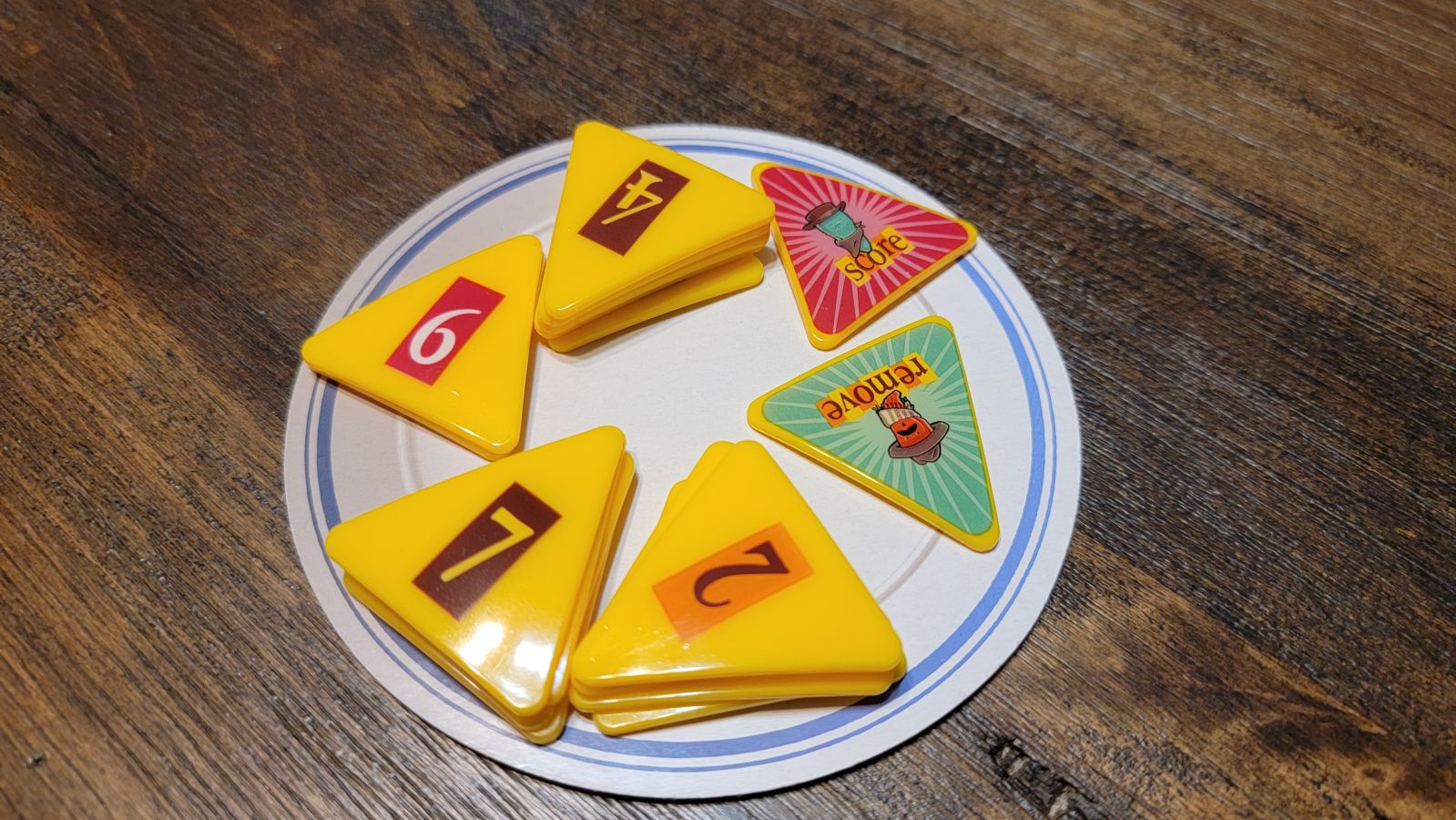 I’ll admit, while the core gameplay is fun, if somewhat mindless, the ending is surprisingly anticlimactic. Winning merely comes down to hoping you have a lot of the specific number drawn, rather than having the most chips. I would much rather have the player with the most chips win, making it more of a necessity to plot against the other players and steal their chips. It’s still important to attempt to thwart other players, but may not be enough in the end. Essentially, there’s no skill necessary to win, you simply must just hope you collect enough chips of each type and know when to ignore your greedy impulses to grab just one more chip and stop.

Still, my group had a fun time with Nacho Pile, mainly by pretending that the game was much more cutthroat than it is by forging alliances and making enemies with each turn. While this did not necessarily affect the gameplay in any way, it helped keep up the entertainment value for the half hour or so that we played. While we didn’t feel the need to play a second round, I will say that the game was a fun enough diversion and did cause us to laugh quite often, so that’s still a win in my book.

Overall, Nacho Pile is as simple as the snack it emulates. It is fun in short bursts, is easy to pick up and play, and will most likely be forgotten shortly after. Still, the unique concept and interesting use of packaging makes for a decent novelty piece for a game night and may serve as a good starting game before diving into more complex gaming experiences.

Richard Allen is a freelance writer and contributing editor for various publications. When not writing for Gaming Trend you can find him covering theatre for Broadway World, movies and TV for Fandomize, or working on original stories. An avid retro gamer, he is overly obsessed with Dragon's Lair. Chat with him via @thricetheartist on Twitter and @richardallenwrites on Facebook and Instagram.
Related Articles: Nacho Pile, Tabletop
Share
Tweet
Share
Submit