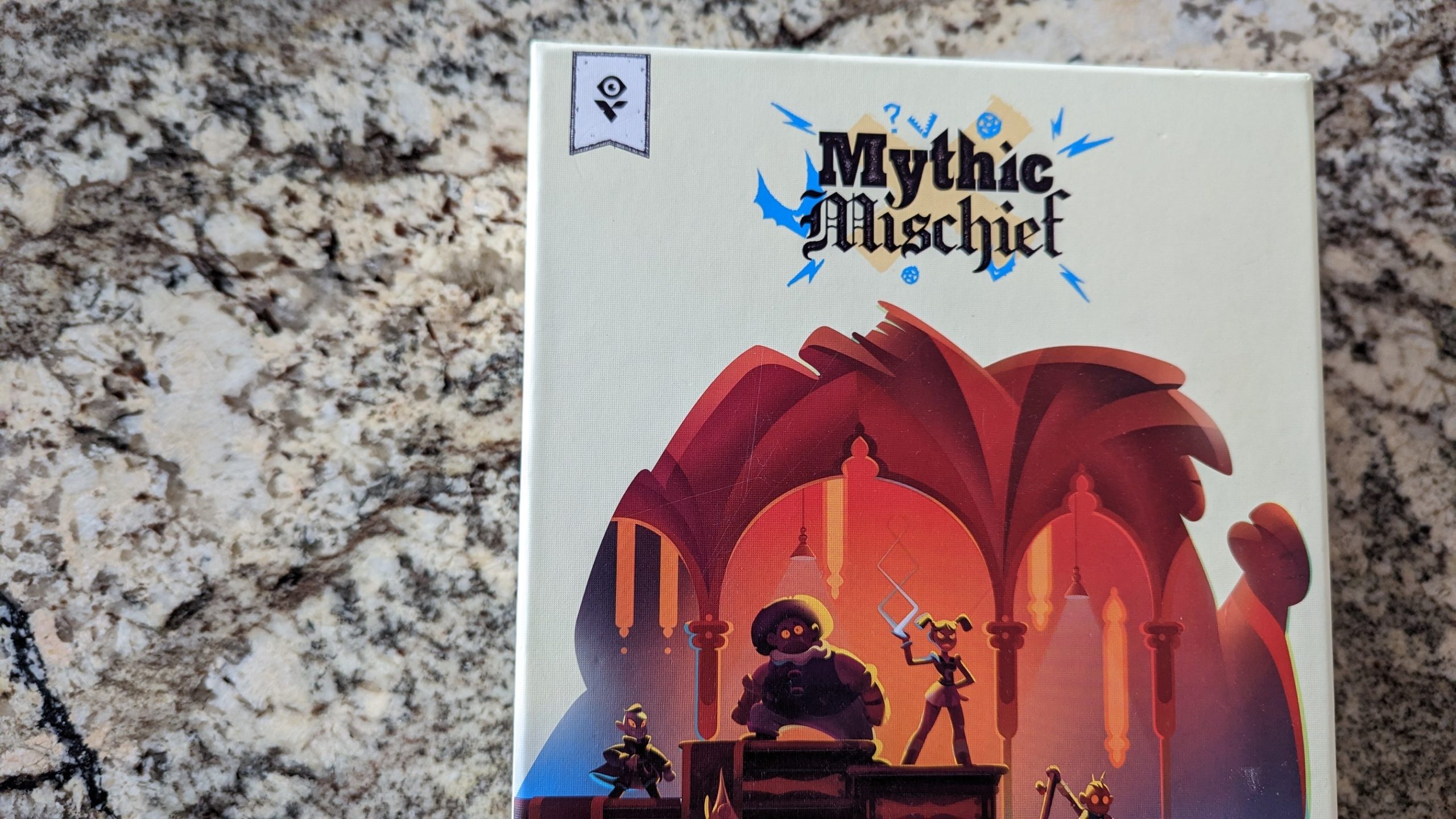 I’ve spent the better part of my free time time this past week or two in a cycle of rewriting and completely scrapping this review, as I would finally land on an approach and look back at my work to absolutely hate it, like if Sisyphus were actively punting his boulder down the mountain every time he was about to crest. I think that a lot of this is because my feelings about Mythic Mischief are similar to that of a soured relationship, and just like it would be weird to interrupt an ex’s first date to interject your story, I feel weird telling you why I fell in love but ultimately broke up with Mythic Mischief.

Like many board gamers nowadays, I’m kinda shallow and the first impression of a beautiful production can predispose a game to my good graces, and true to IV Studio’s reputation, everything about Mythic Mischief’s production oozes quality. Even the box, with its linen finish and gorgeous art, is impressive. When you open the box, the quality continues, with dual-layered player boards, and, under those, is the game trayz insert, with each faction’s pieces contained in a ritzy private school coat of arms. The minis, especially the tomekeeper, are detailed and charming. There is literally nothing about this game’s production quality that I can point at and say “this is bad.” 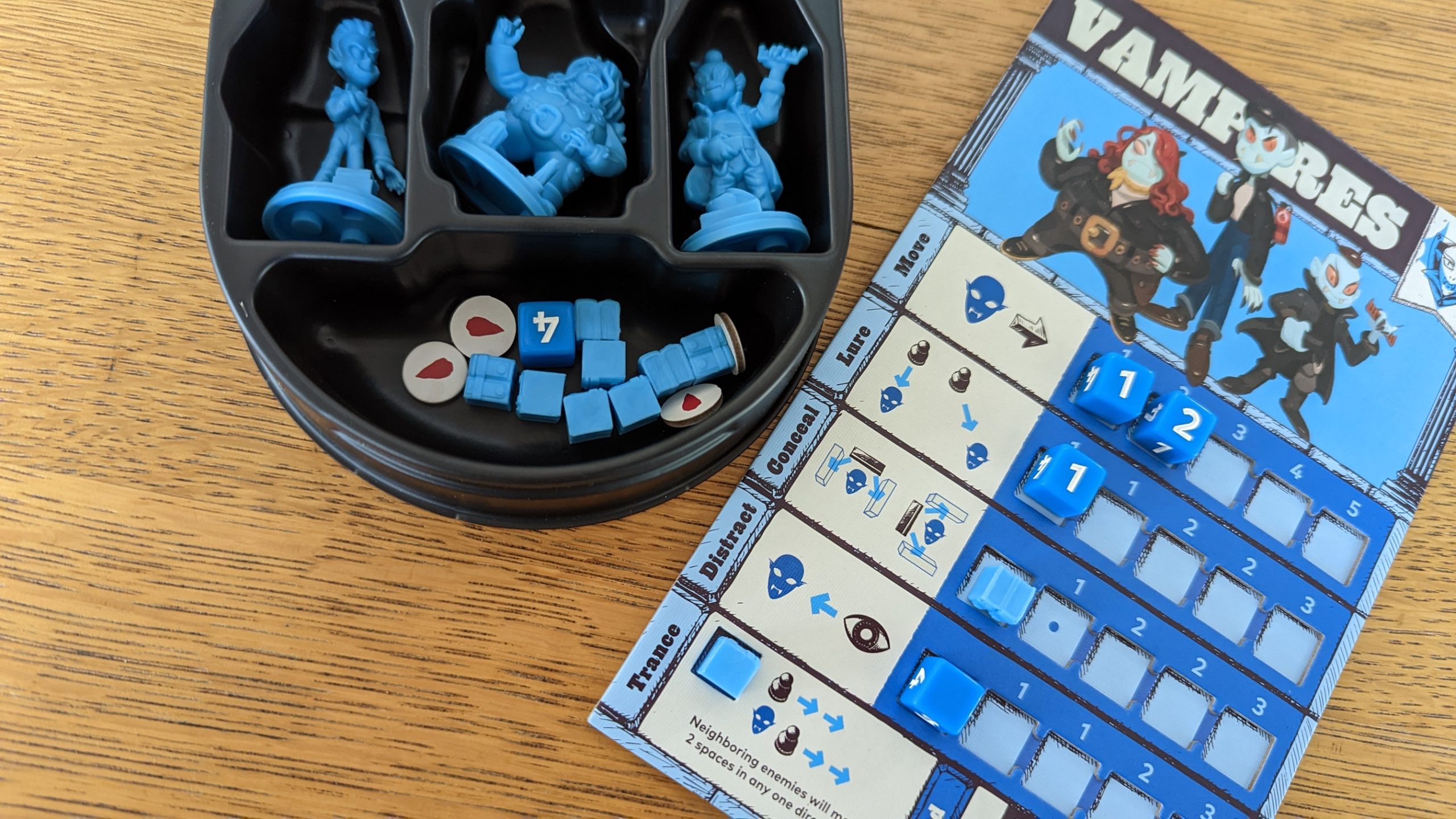 It was when I put all this on the table and actually played the game that things started going south. Mythic Mischief puts players in the shoes of asymmetrical cliques of rabble rousing spookums as they cause havoc in the library by nabbing books, rearranging shelves, and ultimately orchestrating their rivals’ capture by the tomekeeper. The actions you perform to accomplish these tasks are tracked by the action dice in the respective tracks on your player board, and acquired tomes slot into these tracks, buffering dice from the lower numbers. I’ll admit, at first, I was enchanted by this upgrade system, as it’s human nature to like it when your number gets bigger,and I’m no exception. However, this is where the first issue with my relationship to Mythic Mischief revealed itself. 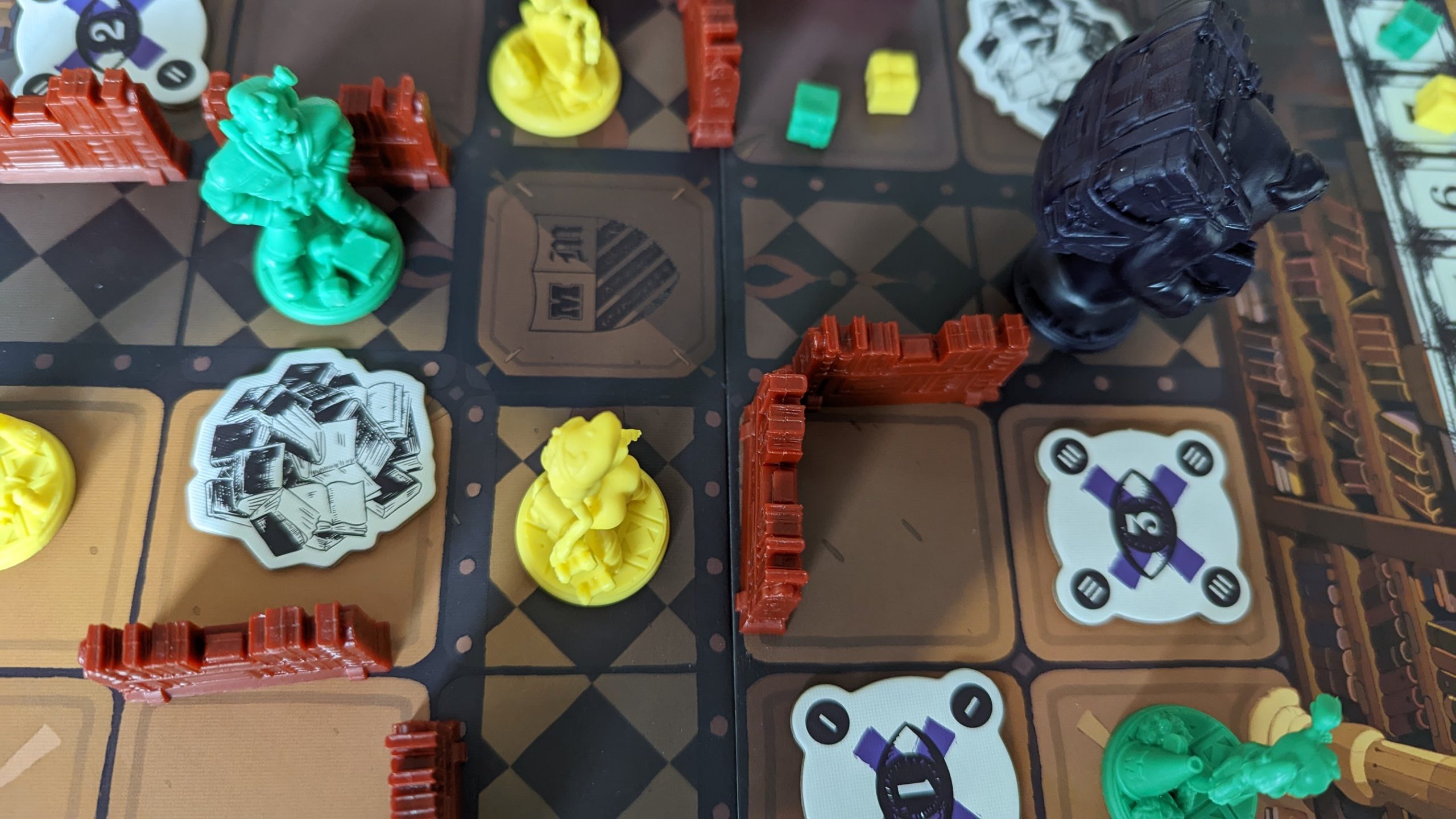 In many ways, this game is very much like beloved Five Tribes in that it defies analysis with the sheer volume of variables that moving shelves, opponent’s pieces, your pieces, and luring the tomekeeper provide. However, in Five Tribes, as the game goes on and your stamina and board game instincts wane, so do the variables as spaces are claimed and meeples are removed. In Mythic Mischief, the game balloons, as pieces are never permanently removed and potential activations increase with the tome upgrades. 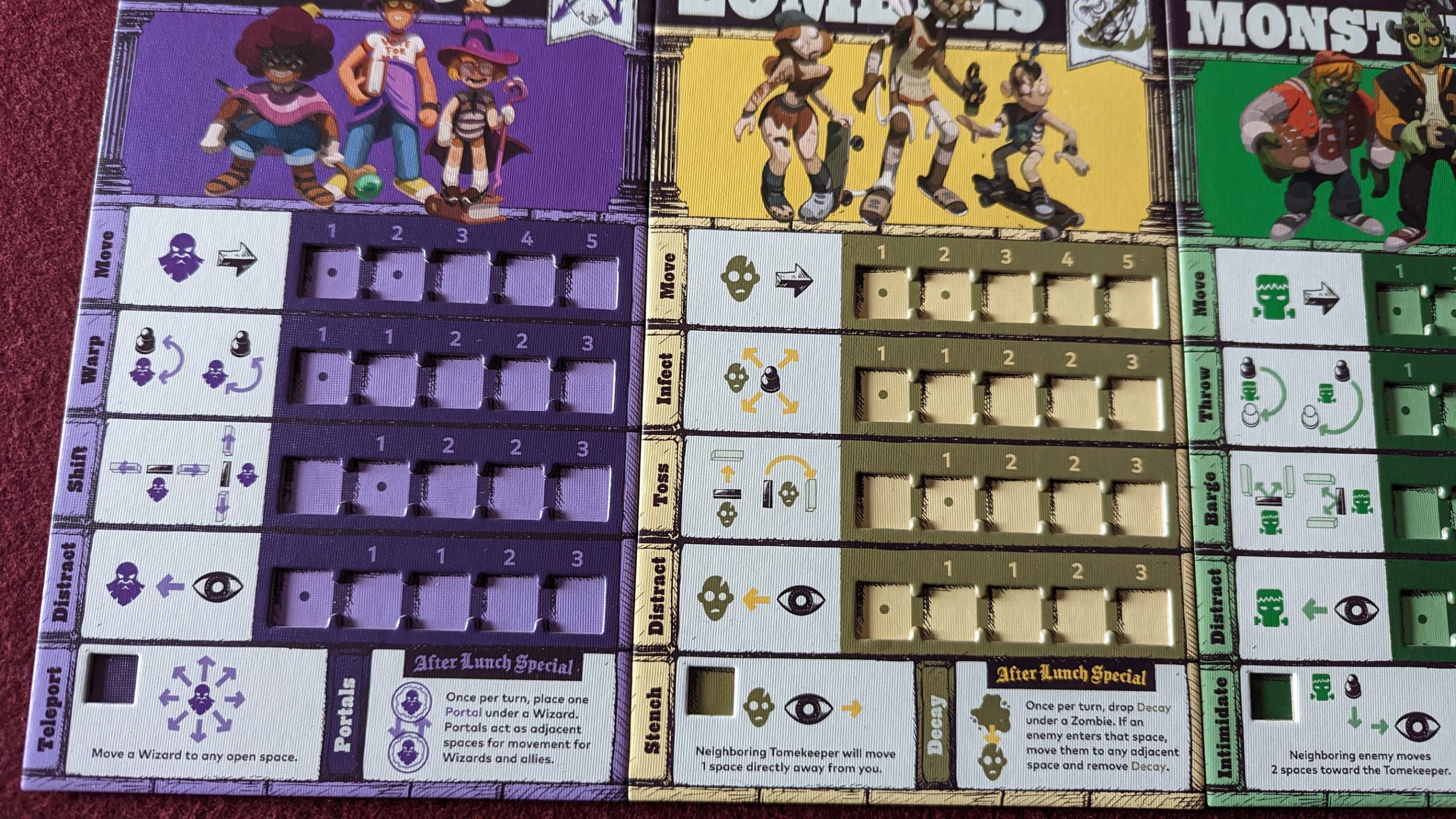 And honestly, I could have brushed those doubts aside and lived a long and happy life with Mythic Mischief if it weren’t for the fatal flaw introduced with the tomekeeper phase. Maybe it’s just that I have all the pathfinding aptitude of a 90’s video game NPC, but between the inevitable maze created by a few rounds of players throwing shelves around and having to take into account the artificial distance created by the clutter tokens which take extra movement to traverse, determining the shortest route for the tomekeeper to take to its next objective takes enough brain power that I may as well do it during my turn. Up until then, I was perfectly happy playing Mythic Mischief the same way I play Five Tribes, kinda turning my brain off, depending upon my instincts and making decisions with my gut. But this forced bit of analysis made me feel like the game was telling me “well actually, you’re playing me wrong,” and it’s like a switch flipped in my brain. The minis that I once found silly and endearing were now discordant with this serious game that demanded to be taken seriously. The production quality, which was a thing of beauty, became a way that the game was too highbrow and fancy for my tastes.

I struggled with this review because I didn’t want to sound like a jilted lover talking shit about his ex to anyone who will listen, and that is very much not how I want this to come across. As much as it may not be for me, there’s a lot here to love, and I’m legitimately happy for people who want what this box has to offer, because it will be wonderful for them.

Don't let the lighthearted theme fool you, Mythic Mischief is a crunchy abstract that's closer to chess than it is to Onitama.

Nick grew up reading fantasy novels and board game rules for fun, so he accepted he was a dork at an early age. When he's not busy researching the intricacies of a hobby he'll never pick up, Nick can be caught attempting to either cook an edible meal or befriend local crows.
Related Articles: Mythic Mischief
Share
Tweet
Share
Submit