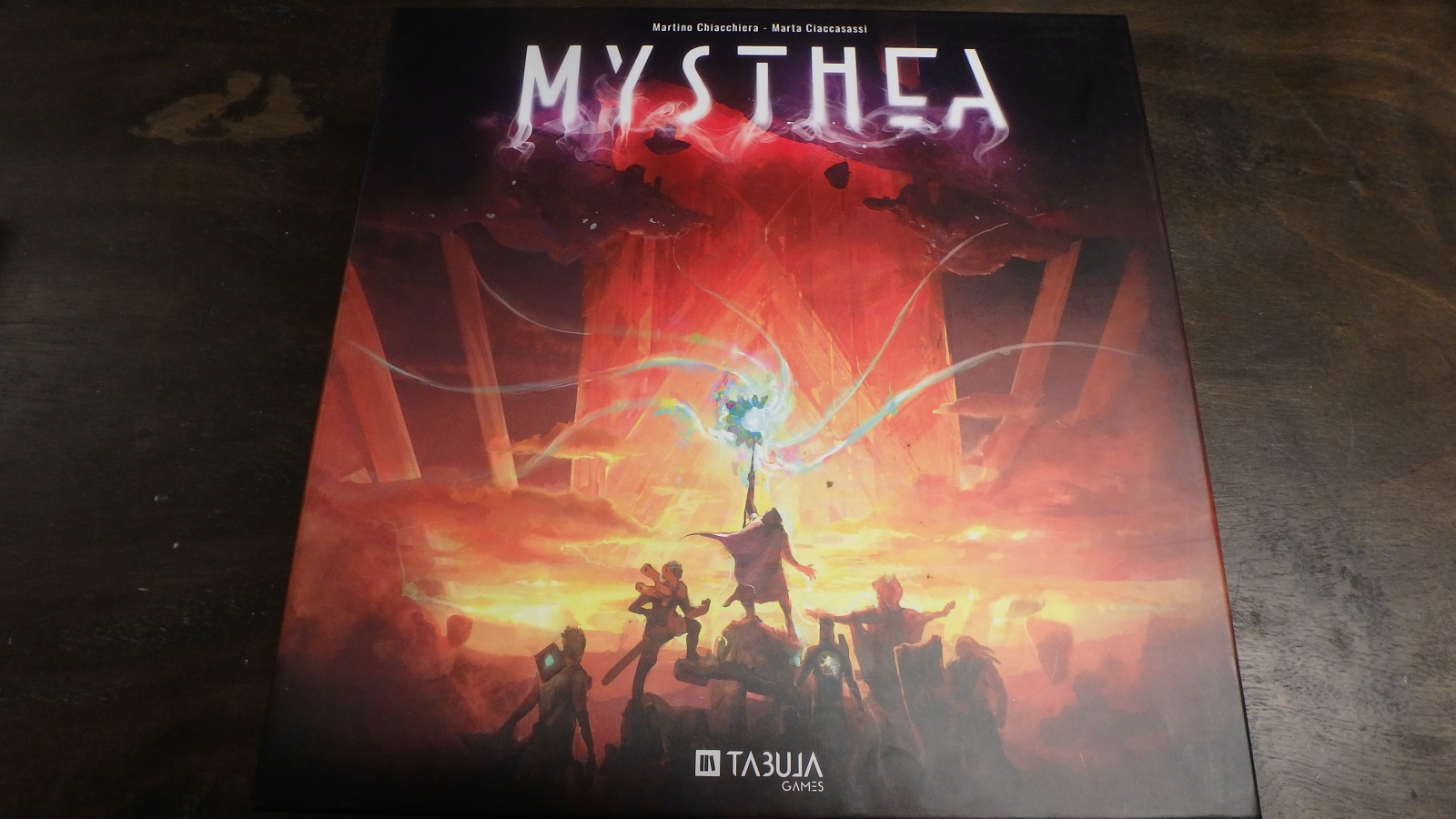 Mysthea is the type of game that I legitimately love, but always struggle to get to the table. At its core, Mysthea is one of those epic-length area control games, complete with gorgeous art and minis. On top of that core, it introduces a good bit of euro-style VP scoring efficiencies, along with a card-driven action system that feels similar to Pax Pamir. This game can really sing, and when you get an engine going for raking in VP, you feel like a board gaming god. Problem is, if you fail to get off the ground, Mysthea doesn’t pull any punches reminding you that you’re doing poorly. Given that this is a 3-4 hour game, that means I’m going to hesitate before I pull this out again.

Almost everything you do in Mysthea revolves around the game’s command cards. On your turn, you must perform one of three standard actions, accompanied by an optional special action. The development action quite simply allows you to purchase command cards from the shared market, placing them in your hand. You can use your hand with the act action, discarding one of your command cards to use its command value to build your guys or move them around the board. The bottom half of the cards is where this gets interesting, as red cards will give you extra action economy, yellow cards will give you conditional scoring opportunities, and blue and green cards will be placed on your player board. Third, the meditation action is how you refresh your energy stores, with bonuses based on the regions you have units in.

I realize all this seems rather standard for a card-driven area control game, but the special actions are where the game shines- these all are probably going to score you a good chunk of victory points, and parsing which is best at which point is vital to success. The simplest is activating an accessory: those green cards you placed on your board can do any number of things, from being a solid VP trickle, to just letting you go again, to letting you teleport your champion to wherever you want. Also rather simple, but way more interesting, is moving an island. You see those circles that all the minis are placed on? Just flip your player order token, move the island your champion is on wherever you think would serve you better, and nab its attunement card, scoring VP in the process. If your champion is on the same island as your encounter token, you can spend experience to have an encounter, once again scoring a nice chunk of VP and optionally doing some other somesuch depending upon the specific encounter card you scored. Last, you can start a battle, gaining, you guessed it, VP depending on how many units you killed or made retreat. 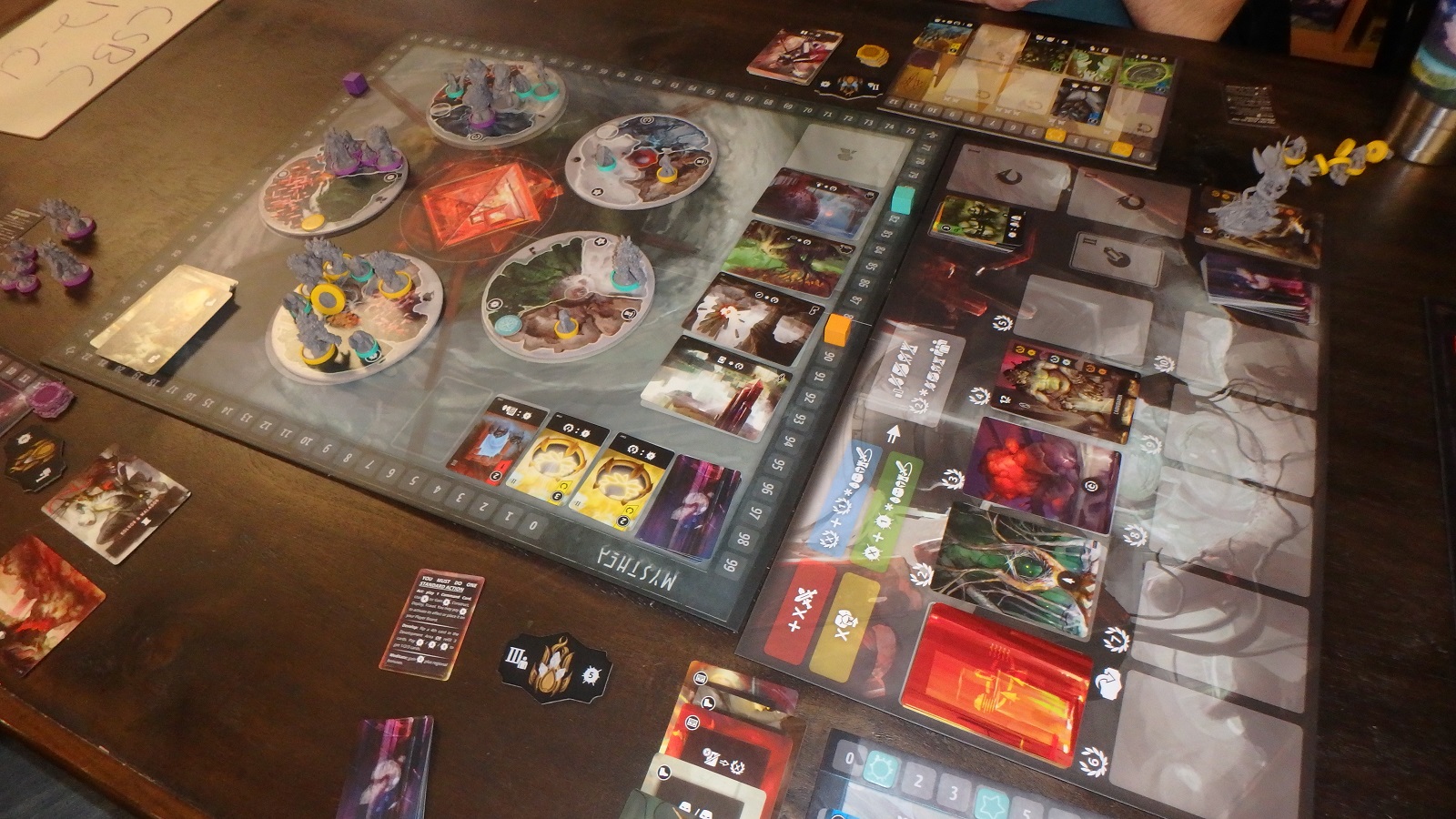 The game itself is divided into three eras, each with a variable number of rounds centered around a fresh mechanic I haven’t seen in an area control game. At the beginning of every era, each of the five region types have their own round card, which are mixed in with monster cards equal to the era and a monster movement card. Then, to start each round, the top card of this deck is flipped onto a track, which indicates both order of resolution for these cards and how much each region will be worth. Hence, if forests are the first card, they aren’t going to be worth much, and therefore won’t be hotly contested, but a late mountain flip will leave everyone scrambling on the last round of an era to nab some chunky point rewards.

You may have noticed that I sort of dropped monsters in there without actually addressing them properly, and that’s with good reason. The monster minis are nice and chunky and can dominate the board, but the effect they have on the game is underwhelming at best, especially compared to the bevy of options for scoring points in the third era. As such, there’s a definite disconnect between the visual/tactile impact of the monsters and their gameplay impact, which can make fighting them an easy noob trap. While this is unquestionably an area control game, a huge chunk of your performance is based on your ability to identify the most efficient means of garnering victory points, and the traps littered throughout this game exacerbate the gap between those who can determine what they should do and those who are just playing in the space; one of my games ended with final scores around 360, 260, and 100. That isn’t to say I don’t heartily believe that there isn’t a place for games that refuse to hold your hand, but there’s also something to be said for not shoving failure in players’ faces the entire game.

The monster minis aren’t the only high point in this game- as a Kickstarter game, you already know that this box is chock-full of minis. Your golems are beefy intimidating rock men, contrasted with your troops, who are adorable angry pebbles. Champion minis are likewise well-detailed, and the rubber player color bases are much easier to take on and off than the standard plastic snaps. However, for me at least, the real standout is the art- the setting’s blend of high fantasy and industry is gorgeously illustrated in the cards, and the art for command cards generally does a good job of correlating to what the card itself does. 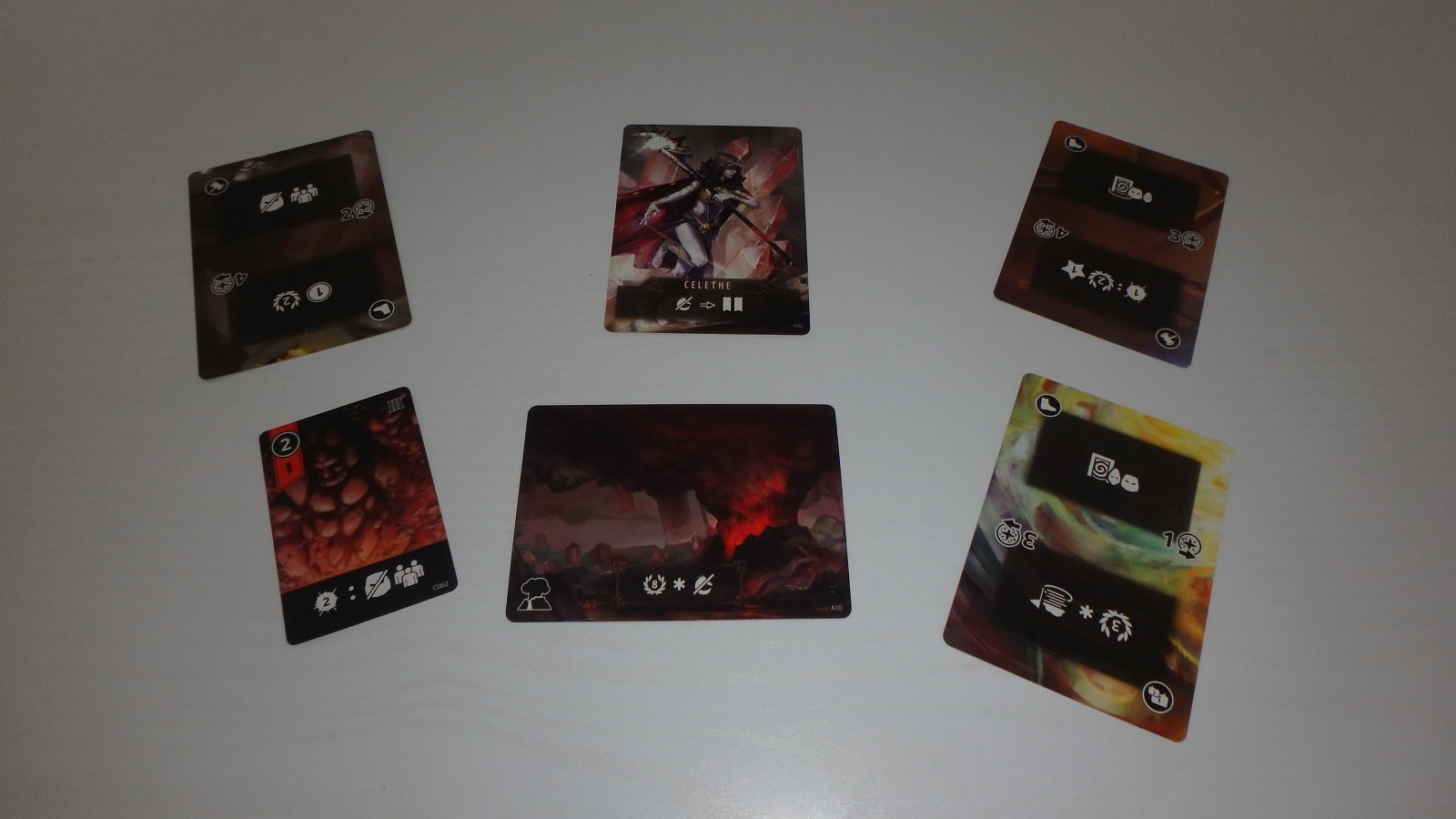 And here we get to my last, and most major, sticking point: Mysthea’s iconography. In an effort to be language-neutral, there is no text to be found on any game component. While I find this admirable in simpler games, Mysthea is very complex, with a large diversity in the information it needs to convey. Though there’s a fair amount of iconography that is very intuitive, like the classic laurels indicating victory points, there’s an even larger contingent that makes little sense, or has different meanings on different card types. All this means that players will be constantly needing to double-check reference sheets to decipher what cards do, grinding an already overlong game down to a snail’s pace.

A quick aside- part of the marketing for Mysthea and Icaion was that you could combine the two games to create a third, cooperative game named Mysthea: The Fall. After trying it out, I definitely would not recommend anyone bother playing it, let alone purchase either game for it. Coming in, I was equal parts intrigued and concerned that it was more a marketing gimmick than anything else, and oh boy, was that concern immediately validated. It suffers from the same overlong teach and simplistic gameplay that sank Icaion for me, with the added issues that you’re using components that just obviously weren’t made for it and therefore feel out of place. All this is to say, if you want to get Mysthea and/or Icaion on their own merits, definitely do so, but if you get both, I’d suggest leaving the material for The Fall back behind the inserts where it belongs.

Mysthea is a unique experience; an interesting blend of area control, hand management, tableau building, and points salad. However, it does ask a lot from its players, from decoding iconography, to constantly determining optimal courses of action, to its long playtime. I'd recommend it if you know that you have a group that would be interested in taking this beast on, but understand that that may be a taller order than you think.

Nick grew up reading fantasy novels and board game rules for fun, so he accepted he was a dork at an early age. When he's not busy researching the intricacies of a hobby he'll never pick up, Nick can be caught attempting to either cook an edible meal or befriend local crows.
Related Articles: Mysthea, Tabletop
Share
Tweet
Share
Submit