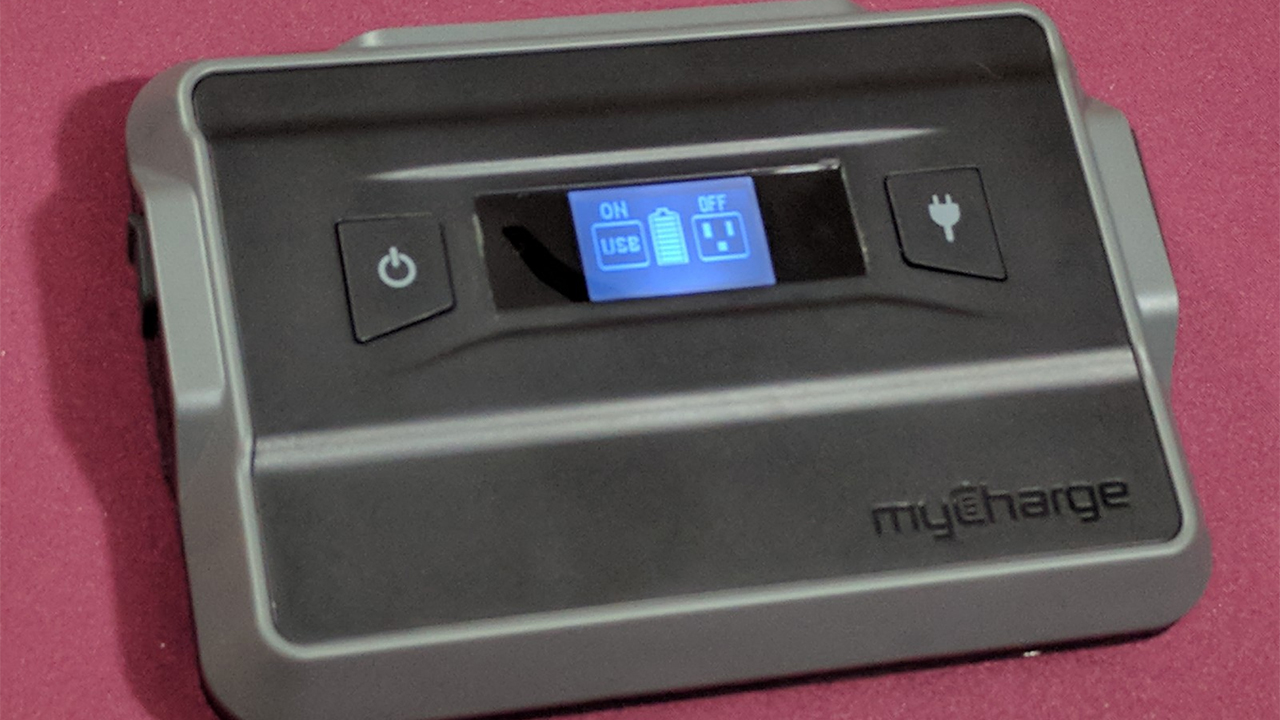 There are easily hundreds of portable chargers and battery packs on sites like Amazon. Tiny ones the size of a lip balm that offer a single phone recharge, and some which are both larger and thicker than a Nintendo 3DS which can recharge an iPhone nearly seven times without breaking a sweat. The current batch can do it with rapid charge capabilities, as well as charging multiple devices simultaneously. All of those capabilities, and not one of them able to power a device with AC power. It’s a shame, but one that developer myCharge is looking to fix with their outdoor-focused myCharge AdventureUltra charging device. I’ve put their device through its paces with a large variety of electronics and came away more impressed than I expected to be. While not explicitly aimed at the gaming community, it certainly fills that role nicely.

The MyCharge team has certainly built the AdventureUltra with the outdoors in mind. Built for hiking, tailgating, or anywhere you might need portable power, the AdventureUltra’s ports are all sealed with a solid and thick plastic plug, closing off both USB ports, the USB-C port, and the AC port from any dust, dirt, or moisture that might otherwise creep in. There are eight small slits for venting heat during charging, but having charged it several times, I could never feel any discernable temperature difference.

The AdventureUltra provides fast charging via the two USB ports and the USB-C connector. Better still, it does so without being prompted. Many batteries and chargers I’ve used require a button press to charge every time you plug a device in to wake it up. The AdventureUltra, as long as you’ve turned on the main switch, will provide power for rapid charging at all times, provided the device on the other end supports it.

Unlike a lot of chargers, the AdventureUltra is capable of delivering power across all of its ports, with the hard cap being 45 watts of simultaneous output. This is provided across two USB ports in the rear, with a USB-C port between them, as well as via the AC port on the side. As it throws powers to all ports, this means you could stack up four phones (two USB, one USB-C, and one via traditional AC wall plug) and charge them all at the same time. We’ll dig into more about how you might balance that in a moment, but first we need to do some math.

Two USB and one USB-C port.

If you are drawing more power than the AdventureUltra is able to simultaneously safely provide (the aforementioned 45 watts) it will go into a shutdown state, protecting your devices for 30 seconds before bringing them back online. If you are concerned about what devices may or may not be able to be powered by this device, allow me to explain how to calculate wattage.

If you look at the back of your device, or the small label on the power adapter, you’ll see two ratings – voltage and amperage. The voltage amount, when multiplied by the amperage amount, yields the total wattage draw. As an example, the New Nintendo 2DSXL uses 4.6 volts at 0.9 amps. 4.6V x 0.9A = 4.14 watts, or roughly 9% of the AdventureUltra’s total capacity. Similarly, the Nintendo Switch draws 15V at 2.6A (in docked mode). Using the same math, that’s 39 Watts, or 87% of capacity. Plugging in both would push close to, but not over, the maximum amount you could run, but let’s remember something here — this is a battery pack. This means you could simultaneously charge both devices (the 2DSXL is 1300 mAh, and the Nintendo Switch is 4310 mAh) at least twice, with a little juice left over in the AdventureUltra’s 13400 mAh tank. So far, however, we are just talking about things other batteries can handle.

The Microsoft Surface is capable of tackling immense workloads (in my test, I’m working with a Surface Pro 4), sporting a fairly solid battery life on top (5087 mAh), and rapid charging from empty to full in about 2.5 hours. The internal battery will hold up to about 8 hours of web surfing, video play at 720p, or about 6 hours of hard video rendering. The AdventureUltra is capable of charging that powerful device nearly 2.5 times, extending battery life past the 24 hour mark without breaking a sweat. For reference, that means you could fly from Los Angeles to London and back and not even have to recharge the AdventureUltra in between.

The biggest unique feature of the AdventureUltra is the inclusion of an inverter and a 110v AC power output port. This means instead of being constrained to just USB-powered devices, the AdventureUltra can run devices that require a regular power plug. Examples might include the aforementioned 2DSXL, a smaller laptop like a Microsoft Surface, a small fan, a LED light, or similar small devices. That said, if you intend to take this device camping, the manufacturer recommends you steer clear of devices that generate heat like hot plates, hair dryers, curling irons, and space heaters, though I’m sure this charger would power them regardless, as long as they fit under the 45 watt cap.

I wanted to see how far I could push the AdventureUltra, so I unleashed larger devices on it to take it a step further.

I have a 32” Samsung TV for our guest room. That device sheet says it’ll draw somewhere between 28 and 48 watts of power. Setting a timer, I let that TV run for 198 minutes before the AdventureUltra powered down. Plugging in my iPad Pro and my Nintendo Switch put the device into protect mode for 30 seconds, but when it came back online it was able to power all three at idle. That said, if I jumped to the Smart TV hub on the Samsung and lit up the WiFi, or if I fired up a more intensive title like The Legend of Zelda: Breath of the Wild, it tripped the protect again, as it should. The device will disable the USB ports first, attempting to get it under the threshold, supplying power to the AC port as the higher priority. That said, 45 watts is what you get, give or take a small margin of flexibility. Thankfully, most handheld devices could be stacked up until you run out of ports without ever hitting that value, making this device as perfect for a trip to your favorite convention as it is a hiking trip into the woods.

For those of you thinking you can power an Xbox One or PlayStation 4, you can put that right out of your head. The PS4 soaks up 90 watts sitting at the menu at idle. The Xbox One is a little lighter tough at idle, but it’s still chewing up 75 watts. Even if it fit under the 45 watt bar, how would you power a TV? The AdventureUltra is for taking out on adventures, and your full-size Sony or Microsoft console isn’t going to be a part of that. Nintendo has to be laughing, though, as their Wii, Wii U, and Switch consoles will all work just fine, with two of them sporting their own screens.

Charged via the included DC power adapter, the AdventureUltra takes roughly two and a half hours to charge up to max capacity. The little LCD screen on the top of the device sports a graduated gauge showing five power state ranges — 0-12%, 13-25%, 39-50%, 64-75%, and 100%. I do wish that gauge was a little more granular, or perhaps a simple percentage value, but it’s certainly better than four solid or blinking lights like my other charging devices.

This thing will power a lot of power-huntry devices simultaneously.

The AdventureUltra has a few other features to keep it operating safely. Once fully charged, the device stops charging the battery. This ensures that the battery doesn’t continue to get charging cycles, which would otherwise cause undue wear and tear on the battery life. Similarly, once a connected device is fully charged, the AdventureUltra will stop supplying power to the device to conserve power and prevent wear and tear on your favorite electronics.

If I had a concern, it’d come from the warranty. The MyCharge team supports a 2 year warranty, which is great, but their own site suggests that that is also the life expectancy of this device. At an MSRP of $129, and with other devices in the 13000 mAh coming in at half that price (but without the AC port) I’m hoping that this device lasts a hell of a lot longer than 24 months.

For the final test of the AdventureUltra, I unleashed a far larger device on it – my OriginPC EON-15 laptop. A full desktop replacement, this device sports a 980m video card, a desktop processor, and draws plenty of power – far more than any reasonable charger could be expected to support. While the EON pushes further than the 45 watts mark by more than double, what the AdventureUltra could do is recharge my battery. With the lid closed, I was able to recharge the roughly 7000 mAh battery – something no other battery pack I’ve tested has been able to achieve.

Portable enough for a convention or a campsite, the AdventureUltra is aptly named. With 13400 mAh of capacity, it’ll handle refilling your favorite tech multiple times in the same day. Better yet, it’ll even handle multiple charges simultaneously. The only device with an inverter and 110v output port, it can even power a laptop. Now I just hope I can keep it running beyond than that worrisome 24 month warranty.

Ron Burke is the Editor in Chief for Gaming Trend. Currently living in Fort Worth, Texas, Ron is an old-school gamer who enjoys CRPGs, action/adventure, platformers, music games, and has recently gotten into tabletop gaming. Ron is also a fourth degree black belt, with a Master's rank in Matsumura Seito Shōrin-ryū, Moo Duk Kwan Tang Soo Do, Universal Tang Soo Do Alliance, and International Tang Soo Do Federation. He also holds ranks in several other styles in his search to be a well-rounded fighter. Ron has been married to Gaming Trend Editor, Laura Burke, for 21 years. They have three dogs - Pazuzu (Irish Terrier), Atë, and Calliope (both Australian Kelpie/Pit Bull mixes).
Related Articles: Hardware, MyCharge AdventureUltra charge hub
Share
Tweet
Share
Submit