Crying is typically a sign of sadness, or in some cases happiness. There are those who say crying means you’re weak, while others say it means you’re strong. So what if crying was literally the key to unlocking an incredible power? Crystar provides an answer in the form of an action-RPG with a unique twist: your tears are the key to boosting your power and achieving your goals. This aspect may sound odd at first, but it makes the adventure much more interesting than your standard action-RPG.

Crystar begins with you waking up in a mysterious world as a glowing butterfly. You have no idea who you are, so you must move forward and hope you can figure it out. There are other butterflies that you can talk to along the way, and you’ll run into floating books that restore your memories. It isn’t long before you remember that you are Rei Hatada, a young high school girl. You soon find your sister Mirai and you are both chased by a large monster. In the attack, the floor crumbles and Mirai falls into the abyss. There are some other interesting events that happen that I don’t want to spoil, but it isn’t long before Rei forms a contract with the managers of Purgatory in exchange for the power to revive her sister. This is where your journey truly begins. 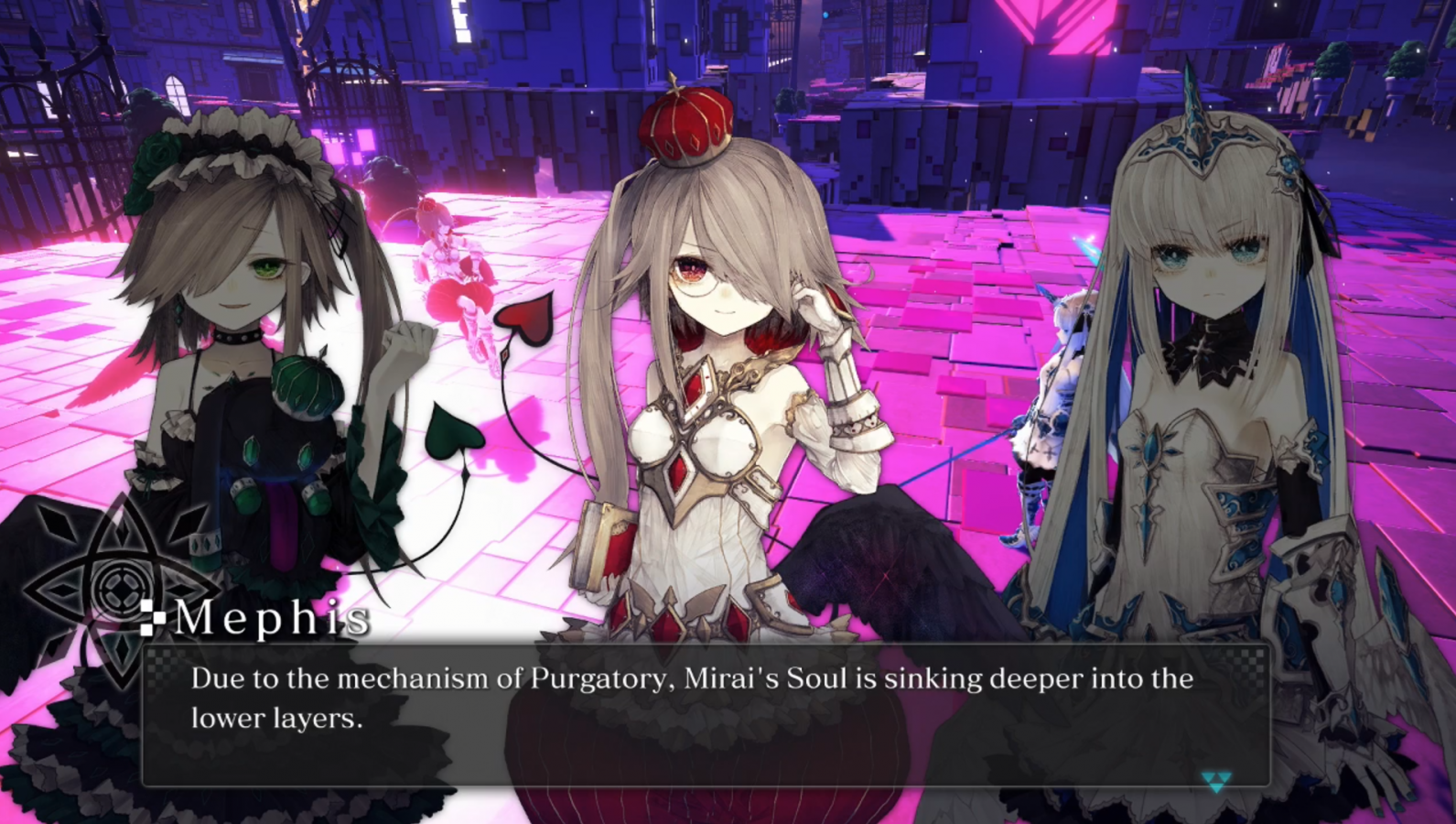 The gameplay is like your standard action-RPG, where you traverse dungeon-like levels and fight enemies. Unlike some other games in the genre, you don’t have the option to move to different areas on a map or have a hub level. The game is broken up into chapters that each have their own levels. The levels have a maze-like structure to them, so there may be multiple paths to take. That being said, you must reach the yellow teleporter in order to move to the next floor of that level. If you pull up the map, you get an idea of what direction you need to head in order to reach the teleporter. If there isn’t a teleporter on the map, then that means you need to reach some other specific area of the level in order to trigger a story event. In that case, exploring is all you can do.

As previously mentioned, you play as Rei, but as you progress through the story, you’ll acquire three other party members. Each character has their own fighting style, special moves, health, SP, and tear meter (more on that later). My favorite thing about the party system in this game is that you can swap between characters with the press of a button. Each character is mapped to one of the d-pad buttons and pressing the corresponding button immediately changes you to the chosen character. If one of your party members dies, they get knocked out of battle and one of the others gets pulled out immediately. In a sense, it’s like having four lives, and that safety net is pretty nice. In order to revive fallen teammates, you need to either complete the level or use the Pashka item that you can buy from the shop. Also, it means that you have several different fighting styles at your disposal with the press of a button. You may start fighting a group of enemies with someone good at crowd control and then swap to someone that can do some heavy one-on-one damage after you’ve thinned the herd. You can also use these switches in order to save a hurt party member from being downed. 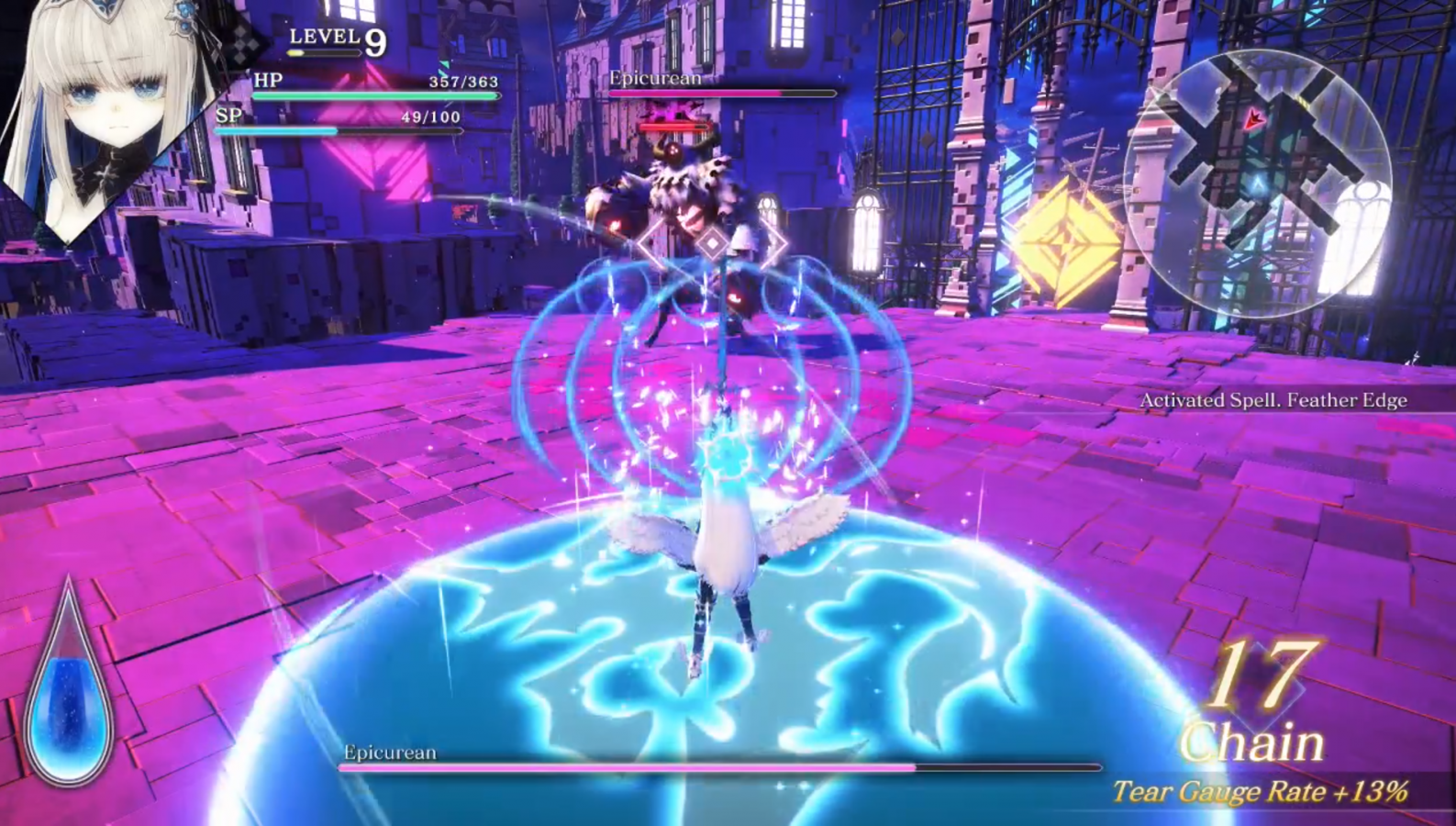 The combat boils down to light attacks, heavy attacks, jumping, and special attacks. The light and heavy attacks can be strung together to create combos, while the special attacks require SP to use. Each character can only equip four special attacks, with each one corresponding to R1 + one of the face buttons. Performing regular attacks restores your SP by three every time you hit an enemy. That restoration rate is really nice, and was a pleasant surprise to discover. There is another meter that regular attacks restore, and that is the tear meter I mentioned earlier. The bottom left of the screen contains a giant teardrop that can be filled up two different ways: by hitting enemies with regular attacks or by stopping to cry. You heard me right, you can actually stop and cry. If you hold down L1, you stop and cry, which drains your SP in order to fill your tear meter. Why sacrifice your SP for the tear meter you ask? Well, if the tear meter fills up and you press L1, you summon your guardian to fight by your side until the tear meter empties. This helps give you a longer reach for attacking and obviously allows you to do more damage to your foes. In addition to extra damage, if you press L1 again before the tear meter empties, you perform a powerful attack with your guardian. Doing so causes your guardian to disappear immediately after the attack, so I recommend waiting until you’ve taken advantage of most of the meter. In other words, crying makes you more powerful and formidable.

There are some fodder enemies that have a menacing purplish-red aura to them, and these enemies are stronger than the others. Not only that, but defeating them causes them to drop a torment crystal. Picking up these crystals causes you to experience their personal issues and drops your stats until you get rid of them. The enemies that you fight are Specters and Revenants, so the experiences that you absorb are remnants of their former lives. At first it sounds like there’s no upside to the torments, but that comes later when you’re back in your room, which is your hub menu. You can carry up to ten torments and when you’re in your room, you have the opportunity to purify them by crying. This prompts Rei to shed some tears and use her power to turn those torments into sentiments. Sentiments are Crystar’s version of weapons and armor. As odd as it sounds, I found this aspect of the game very fascinating. It not only plays into the “crying and showing emotions can be your strength” idea that the game is trying to enforce, but it’s a nice change of pace from the typical shops that you purchase gear from. Sentiments don’t change the type of weapon or fighting style of your characters, but they do boost your stats. 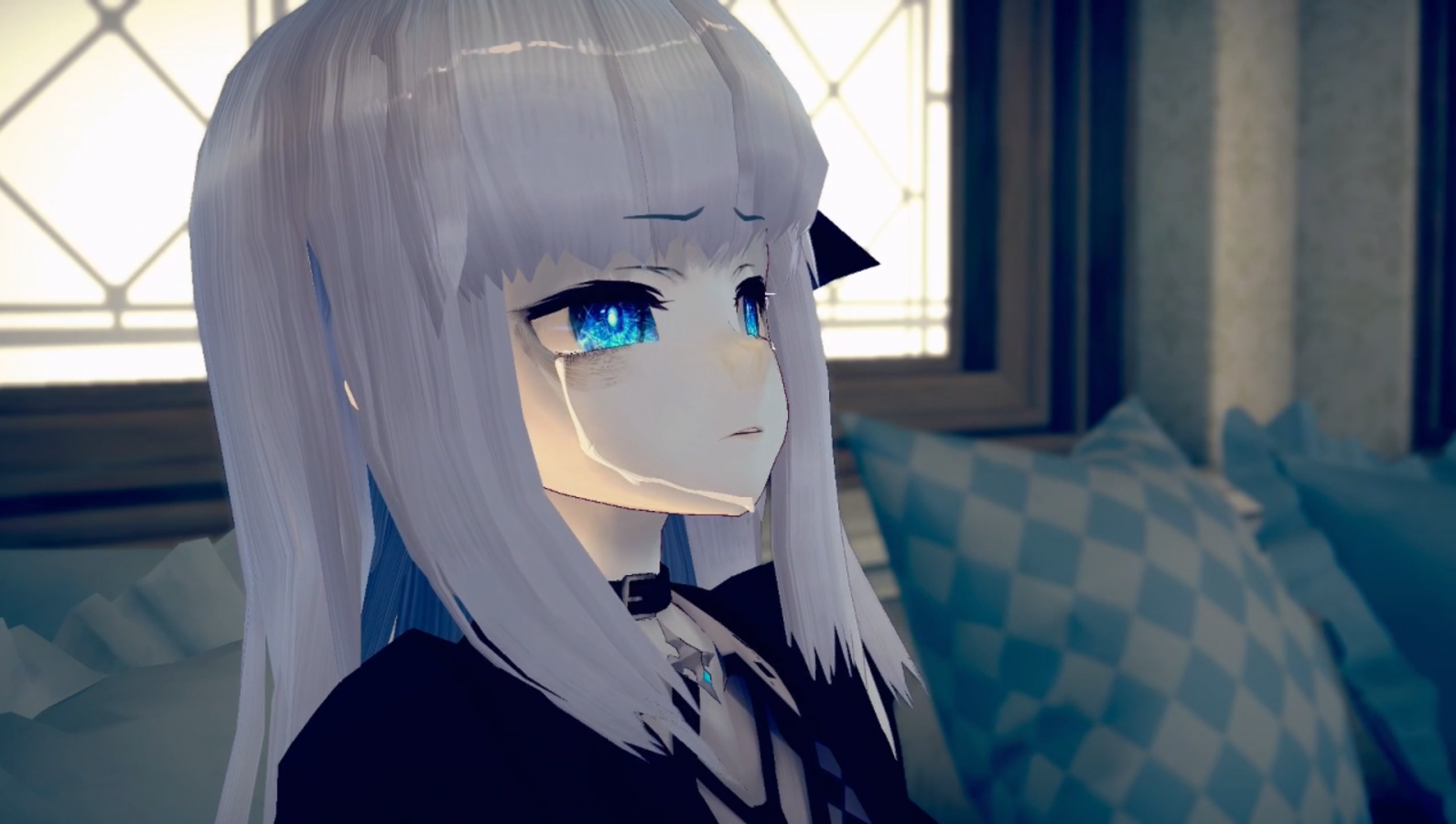 Besides equipping the sentiments, you can also fuse them together in order to level them up. Fusion requires two sentiments of the same name and level along with specified thought and essence costs. Thoughts are Crystar’s version of materials and essence is your currency. Other than fusion, you can spend essence at the peddler to buy healing items, status ailment cures, and thoughts to use towards fusion. The thoughts have no other use besides fusion.

Outside of combat preparation, while in your room you can pet your dog Thelema, view the glossary, listen to game music, call your friends (if a symbol shows they are available to talk), and save the game. You can only save the game in your room, but it makes sense considering the game’s plot. 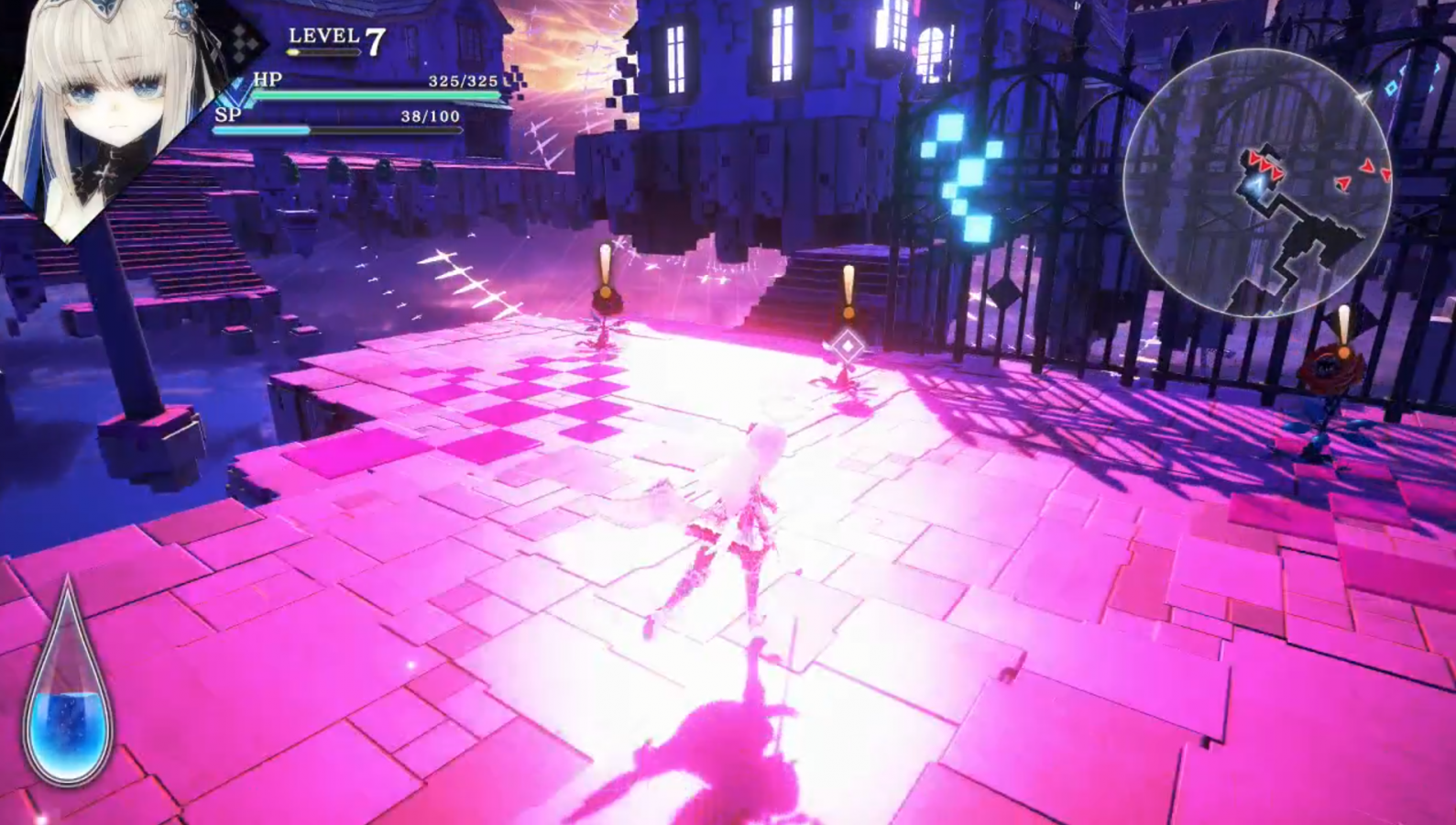 The game is surprisingly easy to learn how to play, even the crying system. The soundtrack and voice acting are very well done and kept me more interested in the characters and world. The quirky and sometimes menacing characters felt fleshed out enough, although you may not feel that way until you reach parts of the story where they reveal backstory. Speaking of backstory, I feel that it’s important to warn you about some of the sensitive topics mentioned in story cutscenes and glossary entries. There are mentions of kidnapping, murder, child abuse and neglect, overworking yourself until death, and suicide, just to name a few. One of the most shocking ones was about a young girl feeling ignored by everyone and hanging herself in the empty classroom. I won’t lie, those hand-drawn stills that implied what happened along with her dialogue, brought my mood WAY down. My heart hurt and I wanted to cry a bit because that kind of thing is all too real in this day and age. I’m not knocking the game for it because you can tell that the game is trying to make a point about emotional distress, loss, the power of letting your feelings out and others in, and the complexities of the heart and mind. As weird as it may sound, I feel that all of these aspects make the game vastly more intriguing and powerful. That being said, please take caution if you decide to pick this game up, which I definitely recommend doing.

Crystar is a great action-RPG with some fascinating twists. Crying is not only a key aspect to boosting your strength in battle, but it enables you to create more powerful gear. Be prepared for mentions of tragic and depressing topics, but remember that they work to enforce the ideas of "showing your emotions as a strength" and the sometimes overlooked issues that others face each day.

Codi loves to play video games and watch movies. He will watch almost any kind of movie just to experience them. His ideas take inspiration from the shows and movies he watches, and games he plays. He also loves a good pun.
Related Articles: Crystar
Share
Tweet
Share
Submit