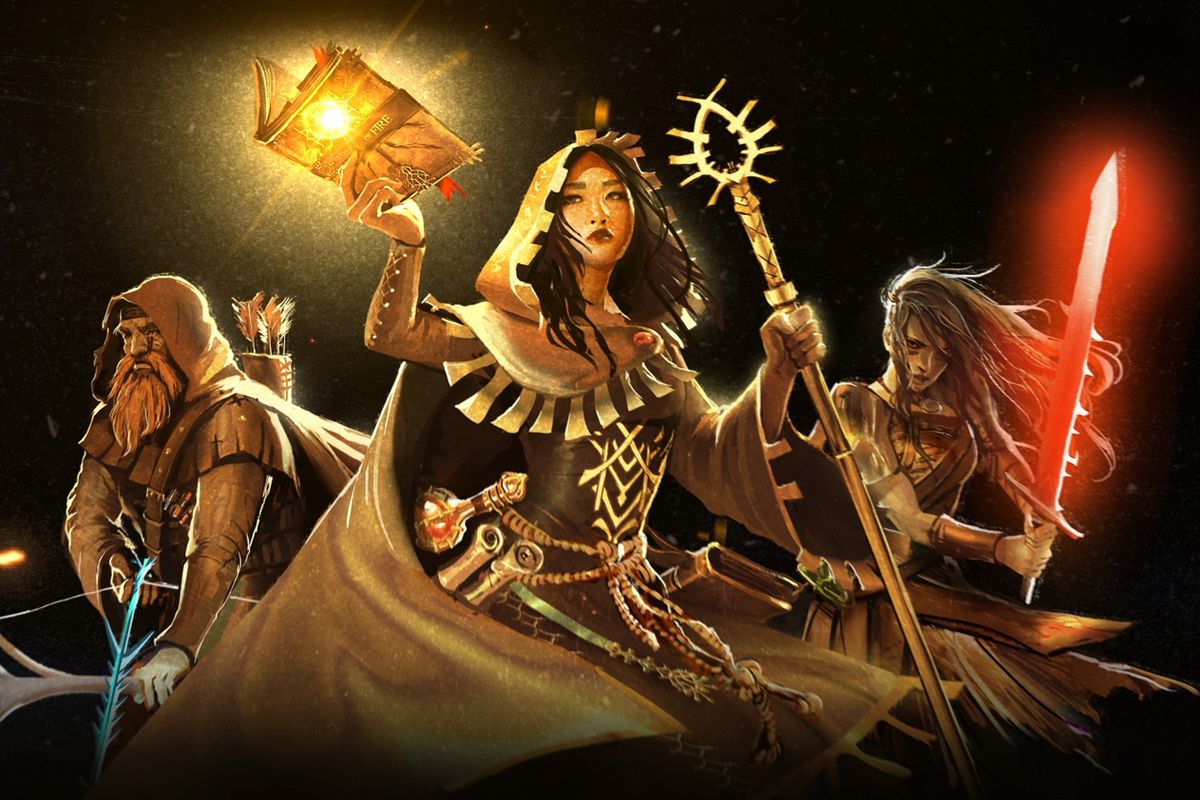 Trials of Fire manages to stand out against a crowded field of strategic deck-building roguelikes. I can see myself pouring around a thousand hours into this, but the time I have spent with it has already been intensely rewarding…mostly. Despite a tedious early grind, this post apocalyptic fantasy epic offers a level of strategy and replay value rarely seen in the genre.

Trials of Fire places players in control of a band of adventurers seeking to survive in Ashe, a world blasted by magical cataclysm. With food and safety scarce, you will choose three heroes from among a generous array of classes (eventually) to travel the wastes and make your fortune. The game includes pregenerated story campaigns as well as randomly generated content for more freeform exploration. Trials of Fire takes place in a few distinct phases; Ashe’s overworld consists of an enormous hex grid, with towns and encounters dotting the landscape. You will come across combats and shops, but most importantly decisions and side quests that add replay value and challenge you to consider your options. Most of the time you are given clear odds as to what you stand to lose or gain, which is almost too efficient for its purpose. It’s so clear what the results of your choices usually are that you might not bother to read the text explaining the narrative context. The lack of accompanying art to any of these decisions does work to the game’s detriment. However varied and well-written these text boxes are, on their own they do little to make Ashe feel inhabited. Mostly what you will actually be seeing and interacting with is a series of hell-blasted deserts and percentile choices. The text references locations and people, but the only place you encounter any kind of visual variety is in the combat. The narrative and strategy are strong, but not well supported by an art direction that doesn’t provide you with much to look at.

You will need to manage your team’s levels of exhaustion and hunger by resting and feeding them, or they will experience disadvantages in upcoming combats. Resting is more strategic than it appears. You have limited food supplies to rest with, but doing so grants you some indispensable features. Resting restores morale, alleviates hunger, and allows you to heal, but also grants you some important choices. You can, provided you have the appropriate ingredients, upgrade your cards or equipment, or remove cards that you don’t want cluttering your deck. 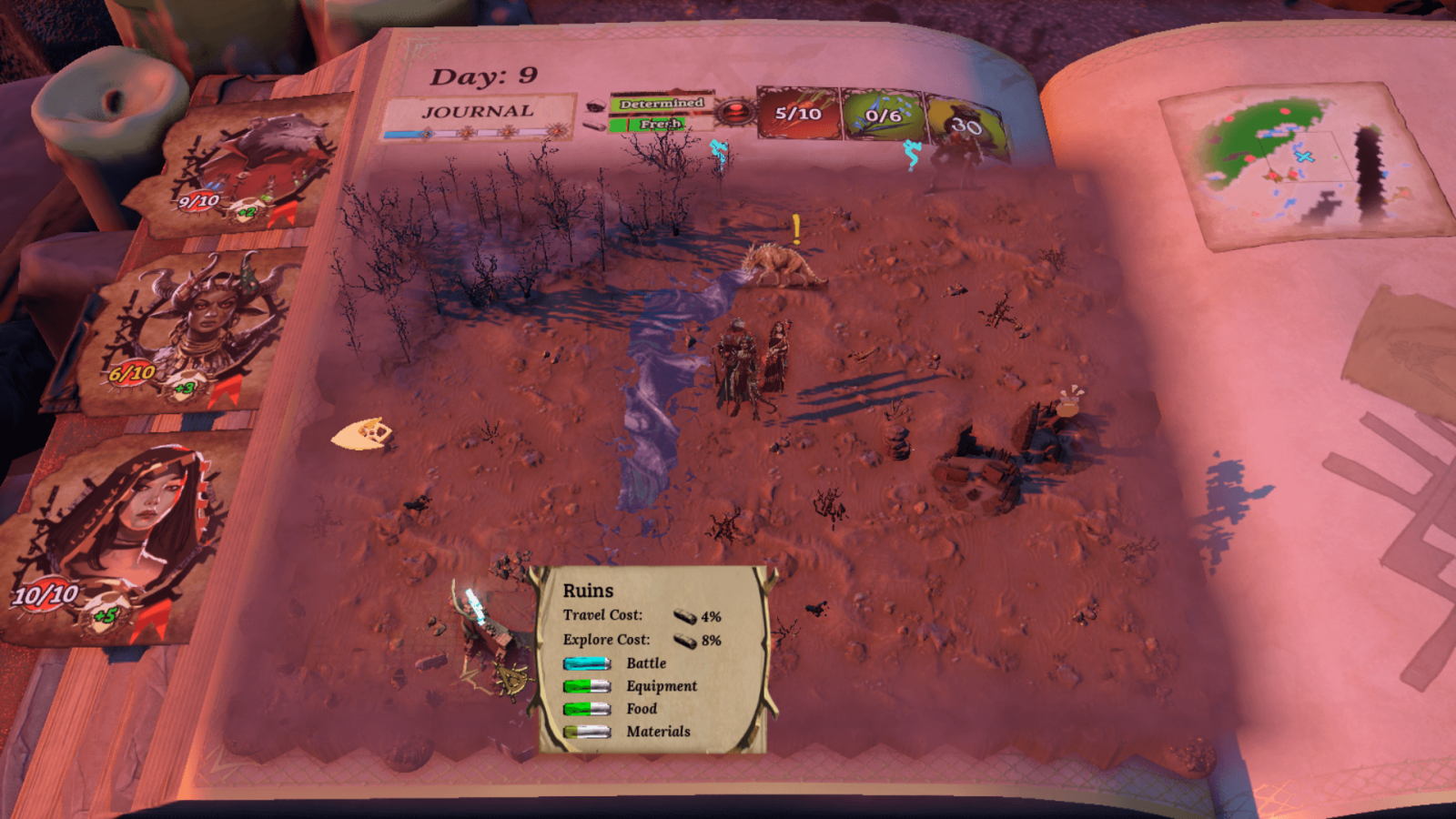 All of this is in service to the main draw: the combat. This is all hex based, placing you and your opponents on a board. Each class has different access to ability cards and equipment which grant additional cards. Those cards are your resources and abilities in combat. All cards cost variable willpower to use, but you can expend cards from your hand to obtain willpower into a shared pool. Alternatively, the character who lost a card from their hand can use each card as two points of movement. This combat is strategically satisfying, challenging you to refine your deck as much as possible if you want to survive, slowly fine-tuning it over time to be as efficient as possible. Rest assured, you will need to have excellent decks and immaculate decision-making if you want to survive a run of Trials of Fire. That being said, it is generous, with an undo button that lets you redo actions if you want to be sure to use your resources to their maximum. 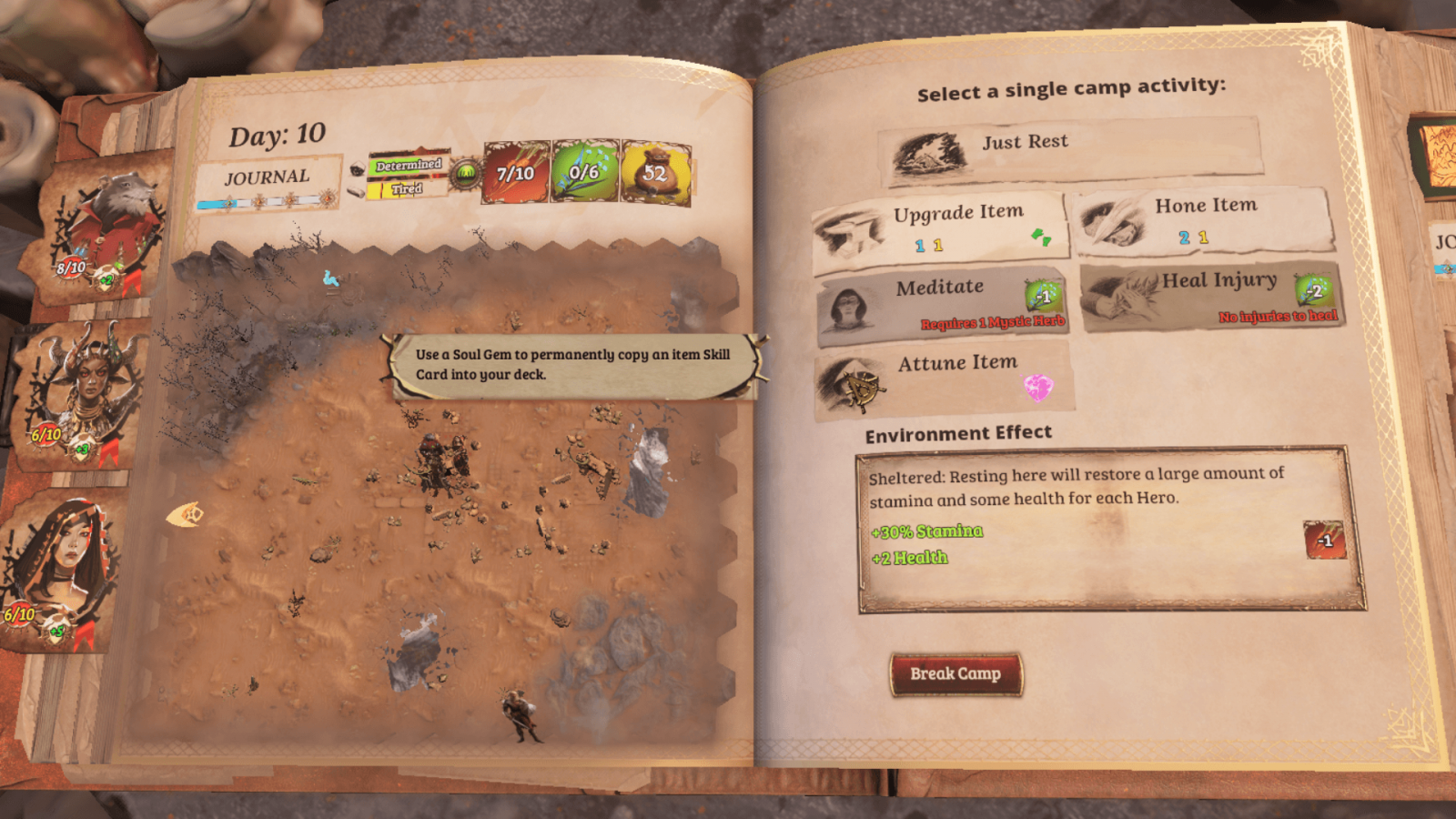 The order in which you play your cards is almost more important than the cards themselves, as they chain into one another, fuel one another, and increase the efficiency of your actions. Every character gets a free, 1 damage attack if adjacent to an enemy that another of your allies attacks, so positioning for you and the enemies is of paramount importance, even for characters with no attack cards in their hands. Your decisions need to evolve as you face different foes who have tactics that make different use of obstacles, positioning, area of effect, and negative status effects. However finely tuned your abilities are, their effectiveness will vary wildly depending on the enemy, requiring a lot of thinking on your feet. Combats are dangerous, because healing requires taking time to rest and using food resources, but reward you with resources and level ups that you will need to succeed. Levelling up will let you replace one card of your standard nine card deck with another, usually more efficient card.

The many classes are quite distinct, prioritizing a wide variety of card types and sporting their own unique builds. You are building a team as much as a group of individuals, and you’ll need to do so carefully. The right mixture of support, damage, and AOE classes can completely reshape the face of your combats. The Warlord class, for example, can buff other classes from a distance or power itself up for melee combat. In one run it was so efficient that I removed its attack cards entirely, but buffed it and its allies for efficient combo attacks. Another run was totally different, with my Warlord buffing its defenses, rushing directly into the fray, and demolishing opponents with cards that had increased power based on its defensive value.

Given the variety of classes, the builds for those classes, the equipment available to them, the randomly generated encounters, the multiple campaigns, and some lethal secrets you can come across, Trials of Fire has a frankly absurd level of replay value. Runs are usually around an hour, so long enough to reward you for good builds but not so much that they feel like a drag. Available for purchase at $16.00 at time of writing, it’s an exceptional purchase that has finally started to pull me away from Griftlands and Slay the Spire. Once you get over the game’s initial grind, you will find one of the best single-player games released this year…that said, we need to talk about that grind. 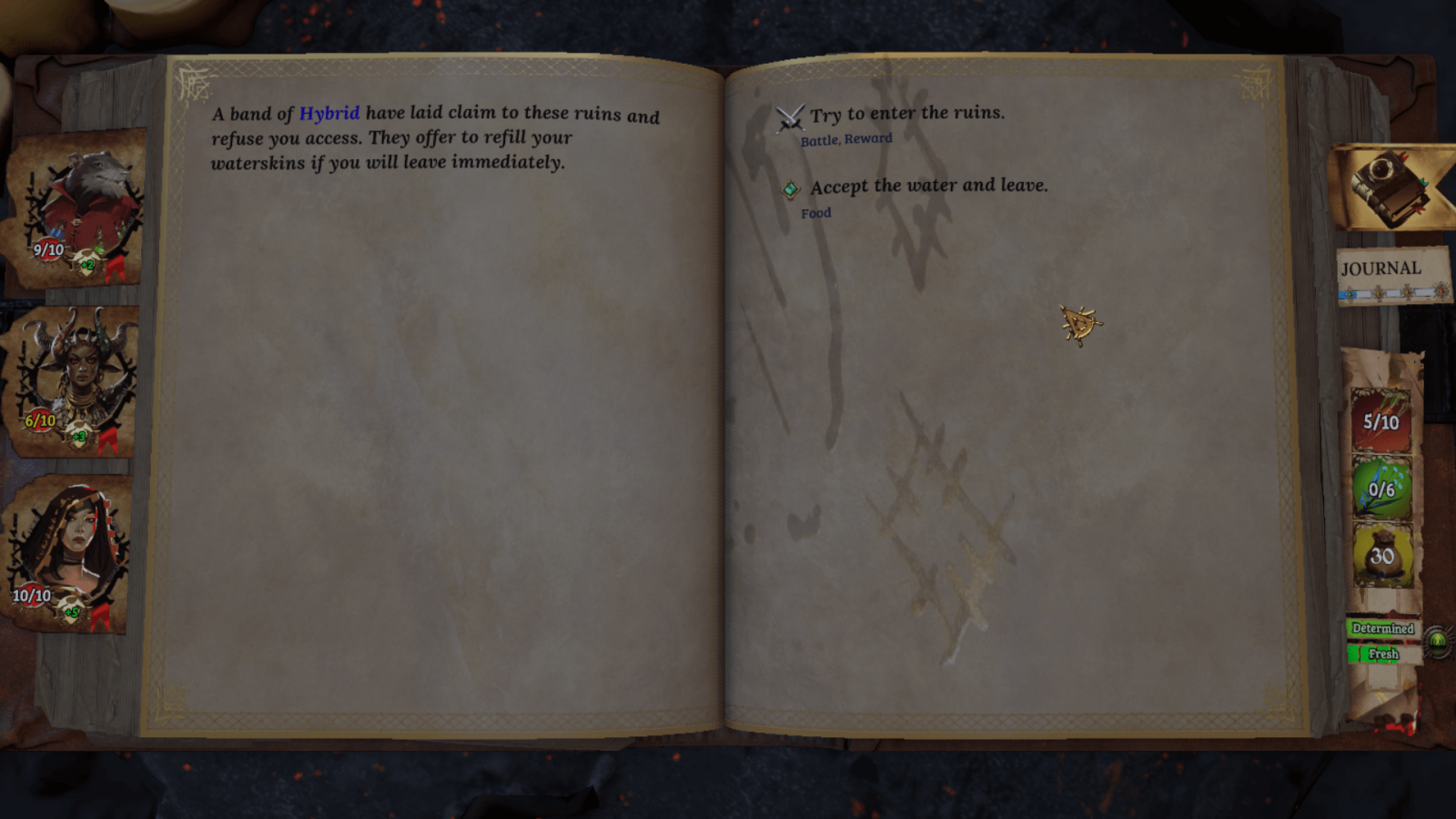 See how much blank space there is here? It would be perfect for some art or even more text to help tell this story.

Trials of Fire takes a while to hit its stride, and not one I enjoyed very much. You need to unlock new classes, but also more cards for classes you own, forcing early runs with a new class to be a chore as you must unlock each character’s more complicated abilities. As you go on you will unlock new types of events as well, to help spice up the experience. Each class has fascinating build potential, but only once you have unlocked the cards that let you actually do something interesting with them. Even within runs, it can take a while for you to make anything useful out of your characters, as it takes a long time to feel excited about what you can accomplish. There is a large, and I mean several hours long, gap between when you feel confident that you understand the nuances of the game and its characters, and when you actually have the tools necessary to make efficient builds. I loved this game immensely, but even so there were a few runs where I had to power through just to make the ones to follow feel impactful and worthwhile.

My only wish for this game, beyond reducing that grind, is to add a feature for player-generated campaigns. With the number of drag and drop features to the world and gameplay, and the text-based narrative focus, I can already see a few campaigns I would write for Ashe, and how little effort it would take to bring them alive. I don’t expect that this will happen, but given the opportunity for expansion I would like to think it’s not impossible. Overall, if Whatboy games spends even a modicum of effort refining presentation, retooling the progression, and (I hope someday) adding in a player generated campaign system, Trials of Fire could be a true legend for the gaming genre. My only issues with it are minor and intransigent, and having gotten past that initial grind I look forward to many hours spent searching through its landscapes and battling its fantastical foes.

Trials of Fire is a new legend for single-player strategy. Combining all the best of tactical board game combat, deck-building, and narrative, this game is a contender for best roguelikes available right now. It does have some flaws that keep me from recommending it categorically, but nothing that overwhelms the depth of strategy at play here. I have long been starved as a fan of turn-based combat, and Trials of Fire has finally erupted from the depths of the earth to satisfy that need.

John Farrell is a legal aid attorney specializing in domestic violence, living in West Chester Pennsylvania. You can listen to him travel the weird west as Carrie A. Nation in the Joker's Wild podcast at: https://jokerswildpodcast.weebly.com/
Related Articles: Trials of Fire
Share
Tweet
Share
Submit