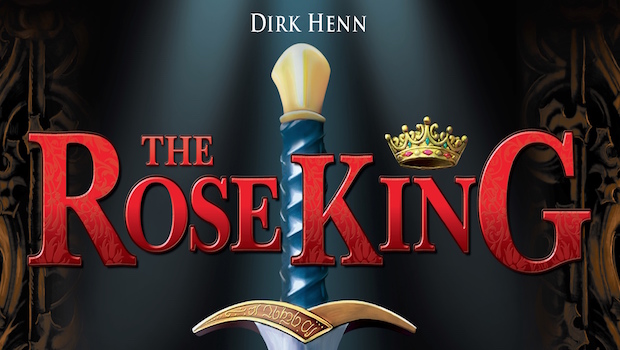 It’s seems absurd to consider any war with a bit of romanticism, but there is a certain passion derived from the War of the Roses, the struggle for the English throne between the white rose clad Yorks and the red rose wearing Lancasters. It was Shakespeare who launched the conflict into lore with Richard III, and since then, there have been countless books, movies, and a good number of board games on the subject. Kosmos’ The Rose King certainly plays up the romanticism with its cover art, a sword crossed by the two colored roses, with petals falling toward a blood stained floor. It’s heavy stuff, and it sets the scene for a surprisingly deep experience.

Two players sit opposite a board laid out in a checkerboard pattern with a period illustration of medieval England faded into the background. A wooden crown piece is placed at the center of the board, and each player is given cards from two different decks.

Power cards determine how far and in what direction you can place your tokens.

Both players are dealt five cards from the power card deck. These cards have a sword on them that points in a specific cardinal or intermediate direction while also showcasing a Roman numeral I, II, or III. These cards determine player movement. The red player begins the game and may take one of his cards to play. The crown then moves in the direction indicated on the card by a number of spaces equal to the Roman numeral. For example, a II with a sword pointing to the northeast would move the crown two spaces diagonally toward the top-right corner of the board.

Just before the movement ends, the current player places a power token (notice the recurring theme of power here) in the space where the crown will end its movement. That side takes control of that location, and play is passed on to the next player.

Movement generally must end in a vacant space. You cannot use a card that would move the piece off the playing board under any circumstances, but you may find yourself holding a card that would allow you to move to a location where your opponent already has a rose. Normally, this is not allowed, unless you use a card from your second deck. Each player begins the game with four hero cards. Using these cards in conjunction with a power card allows you to flip the power token to the other side, claiming that space for yourself. You never regain your hero cards, so choosing when to use them is critical. Other than moving, the only other action available to you is drawing another power card if you are below the five-card limit. That’s as complicated as the rules get.

The larger the grouping of tokens, the more points you will score.

Power cards are dealt face up. There is no hidden information on the board. Knowing what your opponent’s possible reactions could be is just as important as understanding your own options. There is a bit of a sense that you are determining the best move possible as opposed to building a genuine strategy based on how the cards are dealt. It lacks the pure strategy of chess or Go, but like those quintessential games, Rose King forces you to play your opponent as much as you focus on your own side.
The power cards are reshuffled once the initial deck has been used and discarded, and you can always draw back up to your five-card limit to keep the game going. However, once the hero cards are exhausted and the board starts to fill up, it won’t be long until there are no more legal moves to make. At that point, the game will end immediately. Scoring is determined by the number of power tokens that can make an unbreakable connection, excluding connections that can only be made diagonally. The greater the number of tokens in a connection, the higher you will score, which is done by squaring the number in the group. For example, eight tokens connected together would score 64 points. Adding up the score of all connections gives you a final tally, and the highest total between the players wins the game.

The simplicity of the game is such that this review is nearly as long as the rulebook itself, but the game is complex enough to give your brain a good workout. However, to engage in it, one does have to overlook the rather disappointing presentation. The crown token is wooden, but the rose power tokens are just thick cardboard. The board is stiff and bows in the middle. The cards are not of the greatest quality. For a game with such deep elements, it deserved better components.

You may never confuse a game like this for a war game, and this abstract system will not conjure up images of medieval armies clashing metal against one another. Yet, like many war games, you and your opponent will be watching each other carefully, reacting to each other, and doing what you can to put your pieces in the best position to win. The Rose King does this well and is certainly worth a play if given a chance.

The Rose King is a rather inauspicious game to look at, but what it lacks visually it makes up for in some great depth of play. Though it plays completely different than the heftier war games on the same topic, Rose King’s abstract style does immerse you in a struggle for power between the two sides. Even knowing all of your and your opponent’s possibilities doesn’t keep this from being a solid strategy game worth the time you invest.