For many years, I’ve been using an old, mechanical Dell keyboard from my mom’s old desktop. It hasn’t exactly aged gracefully – it’s perpetually covered in dust and many of the keys have that weird shininess from wearing down with use. I have bought two keyboards since I started using that one around 2010, a chiclet keyboard themed after Slimes from Dragon Quest and a Midi keyboard for playing music. While the Slime keyboard is cute, I don’t really like typing or gaming on chiclet keyboards so I mostly use it on consoles, and the Midi keyboard… well, that’s not for typing. So when Kaliber Gaming and IOGEAR offered to send us three of their products for review, I jumped at the chance to bring my PC gaming and typing into the 21st century.

This is the HVER PRO RGB Mechanical Gaming Keyboard with brown switches. It has a sleek aluminum casing with ABS, swappable keycaps. Now I haven’t used that many keyboards, let alone high end ones, but this device has a very premium feel to it. The base won’t move much unless you deliberately push it, the keycaps feel sturdy, and the switches have just enough give so you won’t accidentally press any keys without taking too much effort overall. It also has a nice click to it that’s a bit louder than my Dell but much more satisfying. The keycaps are individually removable using a tool included in the keyboard’s underside if you want to replace them. 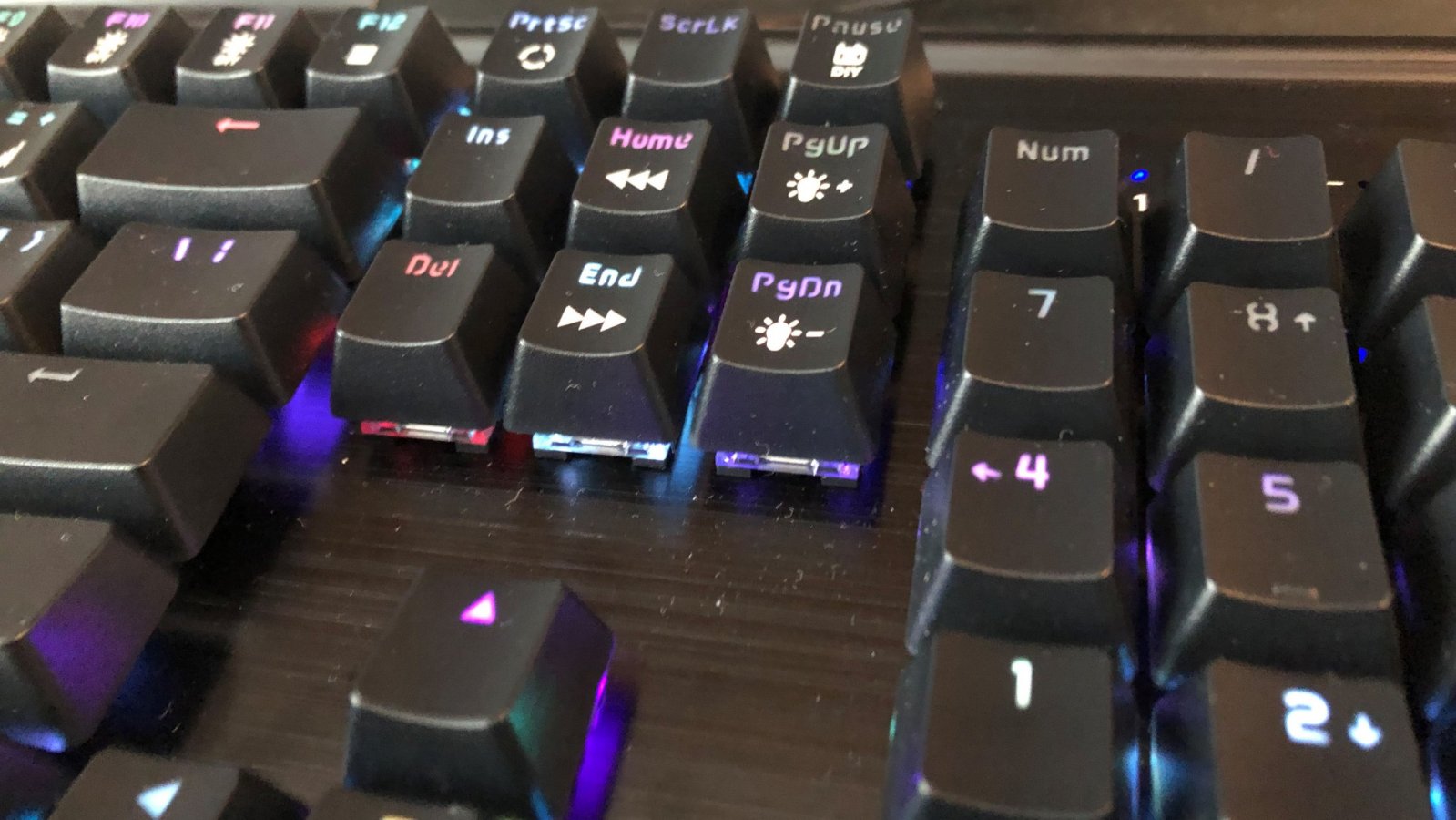 As with many gaming specific keyboards, the HVER PRO lights up! You can download software to program the lights from the store page and choose from multiple presets, such as a moving rainbow effect to a light explosion when pressing a key, or customize your own layout. There are three profiles you can switch between with keyboard shortcuts, so you can change settings on the fly in theory. In practice, it doesn’t switch between profiles but rather your three custom setups. If you want to return to one of the presets you’ll have to open the software back up and swap to it manually. There’s also a setting for programmable Macros which, I’ll be frank, I don’t understand how to use or what they even do. I also feel like you should be able to combine the custom programs with the preset effects in some way, like having WASD lit up red while still retaining the rainbow explosions. It’s not a big deal, since I consider the lights a bonus to a very solid keyboard, but it may bother users looking to have full control over their rig’s aesthetic. 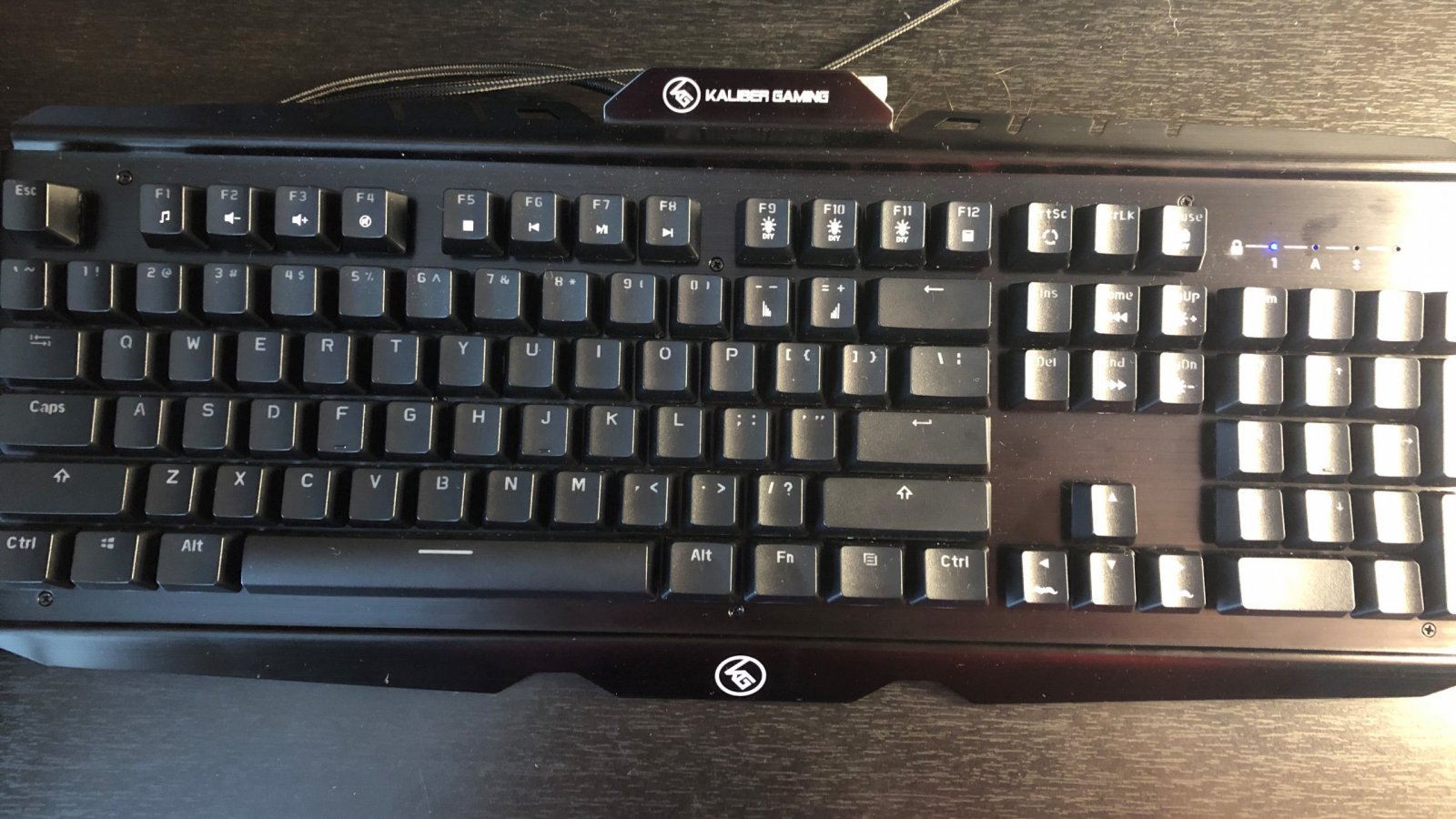 The HVER PRO also has a few other useful features, like being able to lock the Windows key so you don’t accidentally press it or having several notches in the case for organizing wires. While the device itself is excellent, the font used to label the keys can be a bit confusing; for example the 0 key looks like two parentheses (). It’s a device that could certainly use a few improvements on the software side of things, but it’s still a great upgrade from an old 90’s keyboard.

The HVER PRO RGB is a high quality keyboard that feels great to type and game with, but has a few issues such as a strange font and lackluster software customization options.

David is the kind of person to wear his heart on his sleeve. He can find positives in anything, like this is a person who loved Star Fox Zero to death. You’ll see him playing all kinds of games: AAAs, Indies, game jam games, games of all genres, and writing about them! Here. On this website. When not writing or playing games, you can find David making music, games, or enjoying a good book. David’s favorite games include NieR: Automata, Mother 3, and Gravity Rush.
Related Articles: Hardware, HVER PRO RGB Keyboard
Share
Tweet
Share
Submit