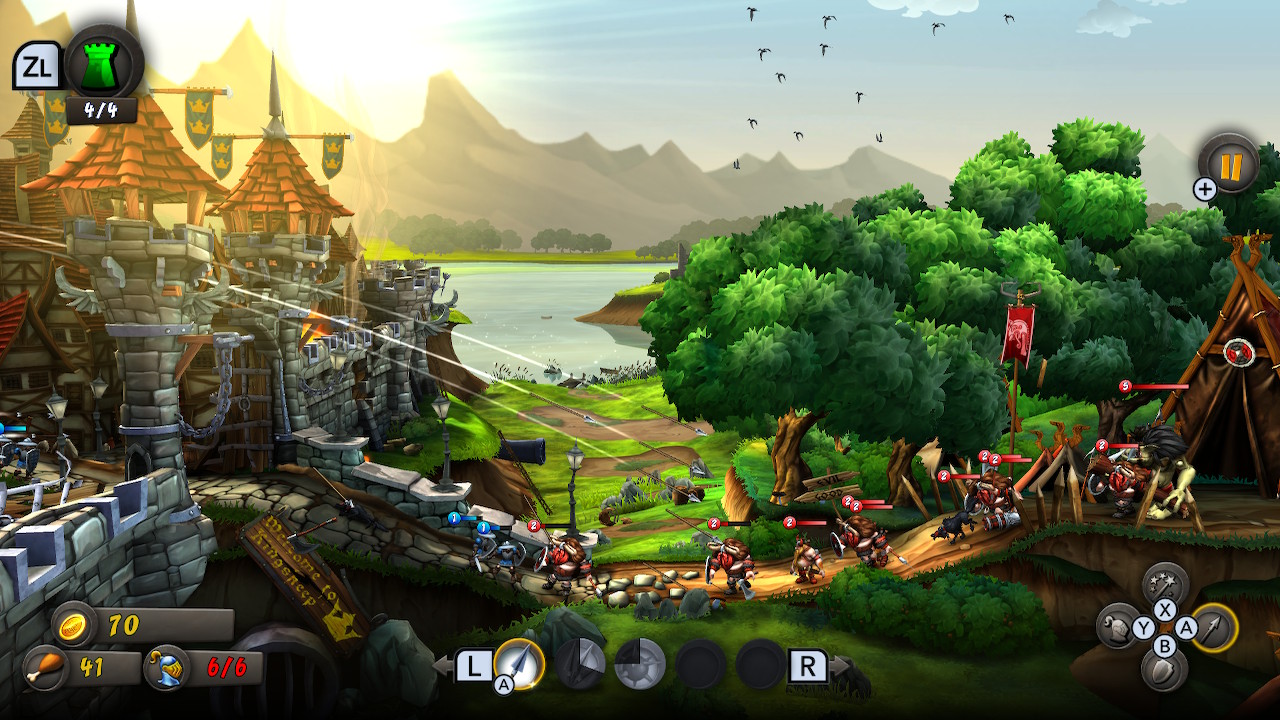 Tower defense games have been extremely popular over the years, whether they be higher budget console games, low budget flash games, or anything in-between. Games such as Plants vs. Zombies or even the Bloons Tower Defense flash game scratch an itch that many gamers have. Using limited resources to set up defenses in order to protect a specified location is incredibly satisfying, as it often requires careful planning and quick-thinking. CastleStorm takes part of this concept and mixes it with Angry Birds and some 2D action games.

CastleStorm starts off with the history of the kingdom, where two magical gems were sought after, causing war and strife between the knights and the vikings. Fortunately, a truce of sorts was reached, where both sides each got a gem and stopped the war. In the present day, it isn’t long before the vikings start attacking again. The vikings eventually steal the second gem, and now it is up to you to get it back.

The game is broken up into story missions and side missions. Most of the time you’ll instantly go from story mission to story mission, but once in awhile, you’ll have the choice to take a slight detour with a side mission. They aren’t necessary to complete, but they offer a great chance to earn some more gold, so they’re easily worth the time. Before each mission, you have the opportunity to choose from a preset selection of castles to use, or use one that you’ve constructed yourself. You can also edit the preset ones if you like their designs, but want to adjust a few things. Castles are made up of structural pieces that provide no bonuses, along with special bonus rooms, and troop rooms. The structure pieces are stronger than the other rooms, so you’ll want to use plenty of them in order to make your castle stronger. The bonus rooms provide boosts ranging from an increased number of troops that can be out at once to increased food generation to increased troop strength, and more. The troop rooms allow you to send out the specific troop that inhabits that room. If a troop room or bonus room is destroyed, you lose access to that troop or bonus for the rest of that mission.

The core gameplay consists of using your castle’s artillery, sending out troops, and using magic. You use the left stick to aim and press A to fire. A line is visible that shows you the arc that the projectile will launch in. The aiming can be finicky and loose, but you can adjust to it. You start off with the basic javelin, but as you play, you’ll unlock projectiles such as an apple grenade, a rock that splits into three rocks, and even an explosive sheep that can be propelled at the push of a button. Every weapon has a different cooldown, with the javelin having the lowest at one second. This means you need to think carefully about how often you fire certain weapons. You can attack incoming enemy troops or the enemy’s castle; some missions don’t have an enemy castle, so you’re purely attacking troops until you’ve killed them all. You press Y to pull up the troop selection bar, then press L or R to cycle through them. Pressing Y again sends out the troop you’re currently looking at. Troops have a slight cooldown as well, but it’s nothing compared to that of some of the projectiles. Each troop has a food cost as well before they can be sent out. Food naturally regenerates at a good rate, but you still can’t go crazy trying to release them. The troop limit mentioned earlier also restricts you unless you’ve upgraded the related bonus room. You start off with the standard swordsman, but will unlock others such as archers, paladins, priests, and more. There are advantages and disadvantages to all of them, so keep that in mind.

Magic is an interesting tool as well, as it offers some summoning spells, attack spells, and even some defensive spells. My personal favorites are the magical swords that pierce the enemy that you target, and summoning Sir Gareth. Sir Gareth is the titular hero of the story, and unlike the regular troops, you control him. Upon being summoned, you zoom into the spot he appears and are able to fight the enemy face to face. You can jump, attack, perform a super slicing move, guard with a shield, and fire your bow. Sir Gareth can decimate a horde of enemies if you use him right, but unfortunately he has his limits. He disappears once he dies or after 30 seconds. As with the other spells and projectiles, Sir Gareth has a cooldown before he can be summoned again. This feature was an unexpected, and awesome addition to the game. It helps mix up the gameplay and keeps things fresh instead of just constantly firing artillery at an enemy castle and troops. Don’t get me wrong, I’ve had a blast doing that, but having more options only helps CastleStorm out.

In order to win most missions, you’ll need to either steal the enemy’s flag or destroy their castle. Stealing the flag is accomplished by troops reaching the enemy’s door, breaking it down, and snatching the flag. If a soldier makes it back to your castle with the flag, then you instantly win. If the carrier dies, the flag is dropped, but it can be picked up by another one of your troops or the enemy. A stolen flag can be brought back to its starting point as long as it hasn’t made it to the enemy’s base. Destroying the castle takes some time, but with some well placed ballista strikes, you can do some real damage fairly quickly. The enemy can also win through either method mentioned above, so you have to balance offense and defense.

The gameplay doesn’t really get more complex than what’s mentioned above, but that isn’t a problem. There’s enough to keep you engaged, and I actually had a hard time putting it down at times. I would tell myself “just one more mission and I’ll stop,” but then I found myself already starting up the next mission on instinct. The visuals are colorful and a bit cartoonish, which fits the tone of the game. The levels don’t have much depth to them, although they still have their own charm. All in all, CastleStorm does a great job at mixing tower defense, Angry Birds, and some 2D action. If you’re a fan of any or all of those types of games, then CastleStorm is right up your alley.

CastleStorm combines the joy of Angry Birds and tower defense games, and sprinkles in some fun fighting sections. Balancing offense and defense is satisfying, especially when you successfully complete your missions. The tone of the game is light-hearted, which makes it all the more enjoyable.

Codi loves to play video games and watch movies. He will watch almost any kind of movie just to experience them. His ideas take inspiration from the shows and movies he watches, and games he plays. He also loves a good pun.
Related Articles: CastleStorm
Share
Tweet
Share
Submit