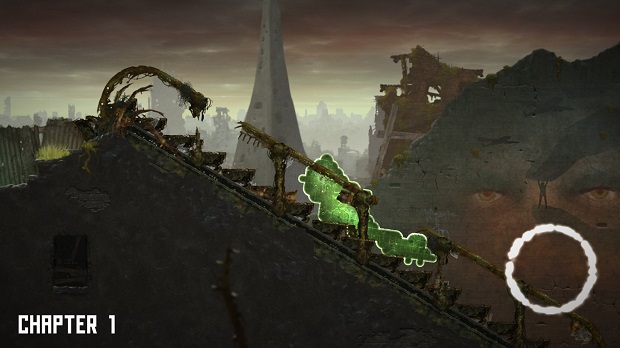 When you open Mushroom 11 and see how polished and innovative it is, it may be hard to believe that it was produced by a team of only four people. However, that is exactly the case; the indie studio behind the game, Untame, is composed of two husband-and-wife duos with a passion for creativity in game design. They were the brains behind the award-winning iOS game Rope Rescue, and Mushroom 11 is their first project for PC.

This game is set in the distant future, when humanity has been wiped out by an apocalyptic event. All that remains on Earth are the charred remnants of a civilization and a few simple lifeforms inhabiting the quiet expanse of space. It could technically be classified as a puzzle platformer, but it’s probably unlike any you have ever played before.

The core feature of Mushroom 11 is its unique erasing mechanic. Instead of relying on the arrow keys or other controls for movement, you erase parts of the fungi cluster to make the rest of it grow forward. With careful erasing, your mushroom can crawl, climb, swim, trigger switches, and more.

This maneuver was a little tough to pull off.

This concept looks pretty simple in gameplay videos, but it’s actually quite challenging. Just when you feel you’ve gotten the hang of it, some new obstacle or foe appears and you realize you have more to learn. Mushroom 11 is physics-based in the truest sense, realistically manipulating the growth and behavior of your fungi with each swipe of the mouse.

However, the difficulty of this game is only occasionally frustrating. There are plenty of checkpoints, most of which occur immediately after puzzles, so solving them feels rewarding. Several times I would shout with glee to my roommates that I’m “so good at video games” after completing a puzzle… then I’d be faced with one that would stump me. This was slightly discouraging, but mostly I felt determined to keep pressing on and making progress.

The landscape is littered with deteriorating buildings and other decaying objects that you must maneuver over and around. There are several types of pools you can encounter as well. For example, lakes of lava will burn you up, so make sure all of your mushroom isn’t submerged at once or you’ll die. The purple goo is poison, infecting you gradually and eating away at your fungi; if you’re in contact with it for too long, you could disintegrate entirely. Water won’t hurt you, but it behaves like water does in real life, so it can be tricky solving puzzles while swimming.

At the end of each chapter is a boss to fight. These are the largest creatures you’ll encounter in this mostly barren world. Like the puzzles, they present a challenge that involves creative thinking but rarely feels insurmountable. After you’ve bested them, you make your way to the end of the terrain, and the chapter closes with a report on how quickly you completed it.

While you travel, you’ll find several little bugs to gobble up. These don’t noticeably increase the size of your mushroom, but there are achievements for successfully eating all of the bugs on each level. This additional challenge encourages extended exploration or replaying levels after bosses have been defeated.

Mushroom 11 doesn’t have an explicit story, per se. There aren’t any cutscenes scattered throughout the chapters, and there isn’t any narration. The player is left to determine the story through scenery and subtext. The epilogue is lovely and minimalistic; though it continues the trend of no narration, it is still very expressive and leaves you filled with hope for the future.

The backgrounds provide pieces of a narrative, so make sure you don’t overlook them.

The game contains original compositions by The Future Sound of London. This rough, sometimes haunting, electronic music is the perfect match for the dystopian environment. Also included are a host of ambient sounds that intertwine wonderfully with the artwork to create a full backdrop.

It’s hard to find anything to criticize about Mushroom 11. It doesn’t rely on its claim to fame, sculpting fungi to solve puzzles, to hold it up. Everything about it feels solidly put together. Even though I feel like adding a definitive story would provided another layer of intrigue, I can understand why they purposely kept everything open to interpretation and left the emphasis on the puzzles. If you like stretching your brain and want to try your hand at a new challenge, I would highly recommend this game. Really, if you’re curious at all about what it has to offer, I’d suggest picking it up.

Mushroom 11 is an elegant and innovative game that keeps surprising me. Though its central mechanics are impressive on their own, the entire game has been skillfully designed. It’s easy to brush aside lofty claims, but Untame has delivered the distinctive gaming experience they promised and then some.

Sarah Marchant is an office admin for a nerdy t-shirt company. She has a soft spot for indie games, a passion for story-driven titles, and a weakness for cooking games and anything with zombies.
Related Articles: Mushroom 11
Share
Tweet
Share
Submit