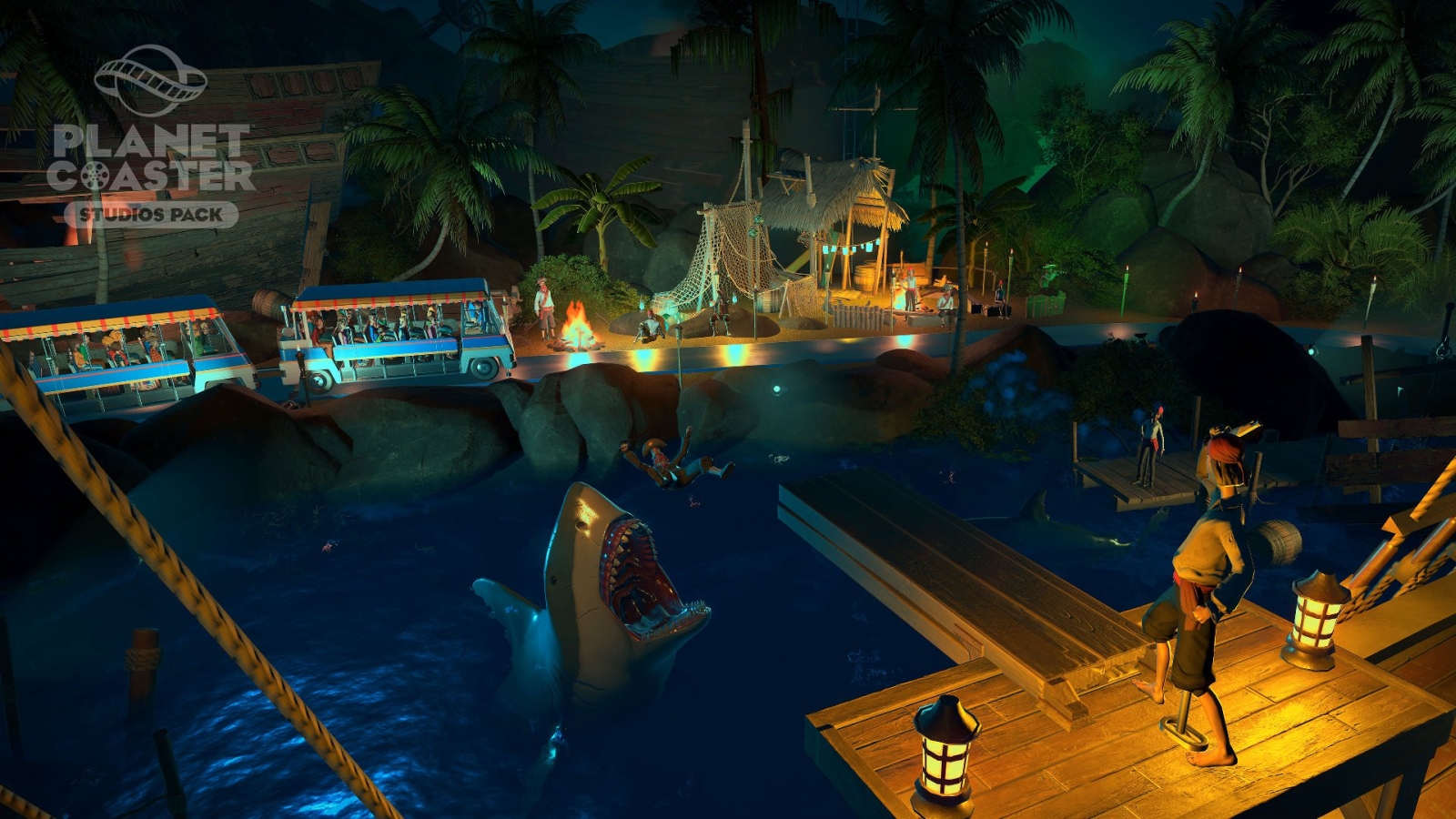 Most DLC tends to fall into the “snippet” bucket. You get a small snap-on piece that lets you drop in a building or two, or maybe adds some small feature. Yea…this isn’t that. The team at Frontier Studios, despite working hard for a mid-year release for their upcoming Jurassic World Evolution game (trailer), have given us the largest expansion yet with something they are calling their Studios Pack.

If you look back a bit on my coverage of Planet Coaster (base product review), you’ve seen that we’ve gotten things like The Munsters, Knight Rider, (some video of the Retro Pack) as well as a whole Adventure Pack (my review) that reminds me of the best parts of theme parks I loved as a kid. But, I went to Universal Studios and Disney World recently, and things have changed…

Universal Studios has transformed several of their rollercoaster rides, specifically Harry Potter and the Forbidden Journey, Harry Potter and the Escape from Gringotts, and Skull Island: Reign of Kong, and I came back from that trip absolutely blown away by the way they’d transformed their coasters from speed demons to full-on experiences that tie in with some of my favorite movies.

Mechanically, the coaster is a busbar track with KUKA robot arms that swing a stationary platform (with full seats, or feet-hanging restraints) around as it moves in front of massive projection screens. This allows for an augmented reality experience where full motion video can be combined with high speed thrills for a fully baked experience. I tell you about this, because that is precisely the system that has been brought to the table by this Studios Pack. Called “Re-Motion” in this pack, this simulation ride allows players to build amazing dark rides with projection screens (and yes, you can put anything you want on those screens, copyrights be damned) as the arm moves freely to maximize the immersion of your guests. A simple pre-built multi-level parking structure called “Panic at the Parking Garage” comes ready to go, providing some inspiration on how you might build something of your very own.

Going back to my trip to Universal Studios, a few months ago I went to the Orlando park. While I enjoyed my time, I was supremely disappointed that they don’t have a backlot tour anymore. Well, Planet Coaster will let me build one with a new powered track ride called the Big Screen Tour. The cars in the tour look precisely how I remember the ones at Universal Studios Hollywood did, and can be run up as transport or as a part of track rides.

The second pre-built ride is called “Horror Heights”. Reminiscent of Disney’s Tower of Terror, this ride is a multi-drop tower that uses several vertical motion shafts, with a elevator car that holds a dozen guests. The car can move between different parts of the ride, riding up and down the different shafts, opening briefly to give guests a view of scenes, or just a scary amount of height before dropping quickly.

Beyond the pre-built rides, this Studios Pack delivers an absolutely massive amount of props to create your own exciting park. By the numbers its 127 character animatronics, 81 vehicles, 60 building items, 24 animated scenery pieces, 85 static scenery elements, 20 new special effects, 19 scenery blueprints, 6 fresh music tracks, 24 placeable ambiance bits, and 78 triggerable SFX. In the video below you’ll get a very brief flyby look at all of these objects — the fact that the video is over 40 minutes long should give you a sense of just big this pack really is.

Beyond the pack contents, there are some goodies coming as part of a free update for everyone. Players have been creating fully-featured theme parks, complete with parking lots and fancy entrances. To make the illusion complete, Frontier has now given us fully functioning hotels for our guests. These hotels need attention like your park, so you’ll need a few janitors, but in return, the park will pick up some additional guests. I’ve already seen a few early fan builds integrating coasters through and around their hotels — as with other packs, it’s hard to even envision what dedicated fans will build.

One of the most anticipated advancements with this pack also comes for free — path tunneling. Now, instead of creating a solid rock and then using the transformation tool to ‘bore out’ a tunnel, you can use the path editor to do it natively. This will be perfect for creating underground paths to curb guest overcrowding, or building subterranean ride entrances and exits. I can think of quite a few real-world rides that are sunk into the ground to reduce their footprint, and now it’s easy to build the same thing in your virtual park.

Fans continue to deliver incredible facsimiles of real-world parks, and the Planet Coaster Studios Pack fills in gaps with a deluge of content. From non-infringing shark attacks, to new ride types, this is easily the biggest and best expansion yet. It’s a must-have for anyone who owns Planet Coaster.

Ron Burke is the Editor in Chief for Gaming Trend. Currently living in Fort Worth, Texas, Ron is an old-school gamer who enjoys CRPGs, action/adventure, platformers, music games, and has recently gotten into tabletop gaming. Ron is also a fourth degree black belt, with a Master's rank in Matsumura Seito Shōrin-ryū, Moo Duk Kwan Tang Soo Do, Universal Tang Soo Do Alliance, and International Tang Soo Do Federation. He also holds ranks in several other styles in his search to be a well-rounded fighter. Ron has been married to Gaming Trend Editor, Laura Burke, for 21 years. They have three dogs - Pazuzu (Irish Terrier), Atë, and Calliope (both Australian Kelpie/Pit Bull mixes).
Related Articles: Let's Play, Planet Coaster: Studios Pack
Share
Tweet
Share
Submit