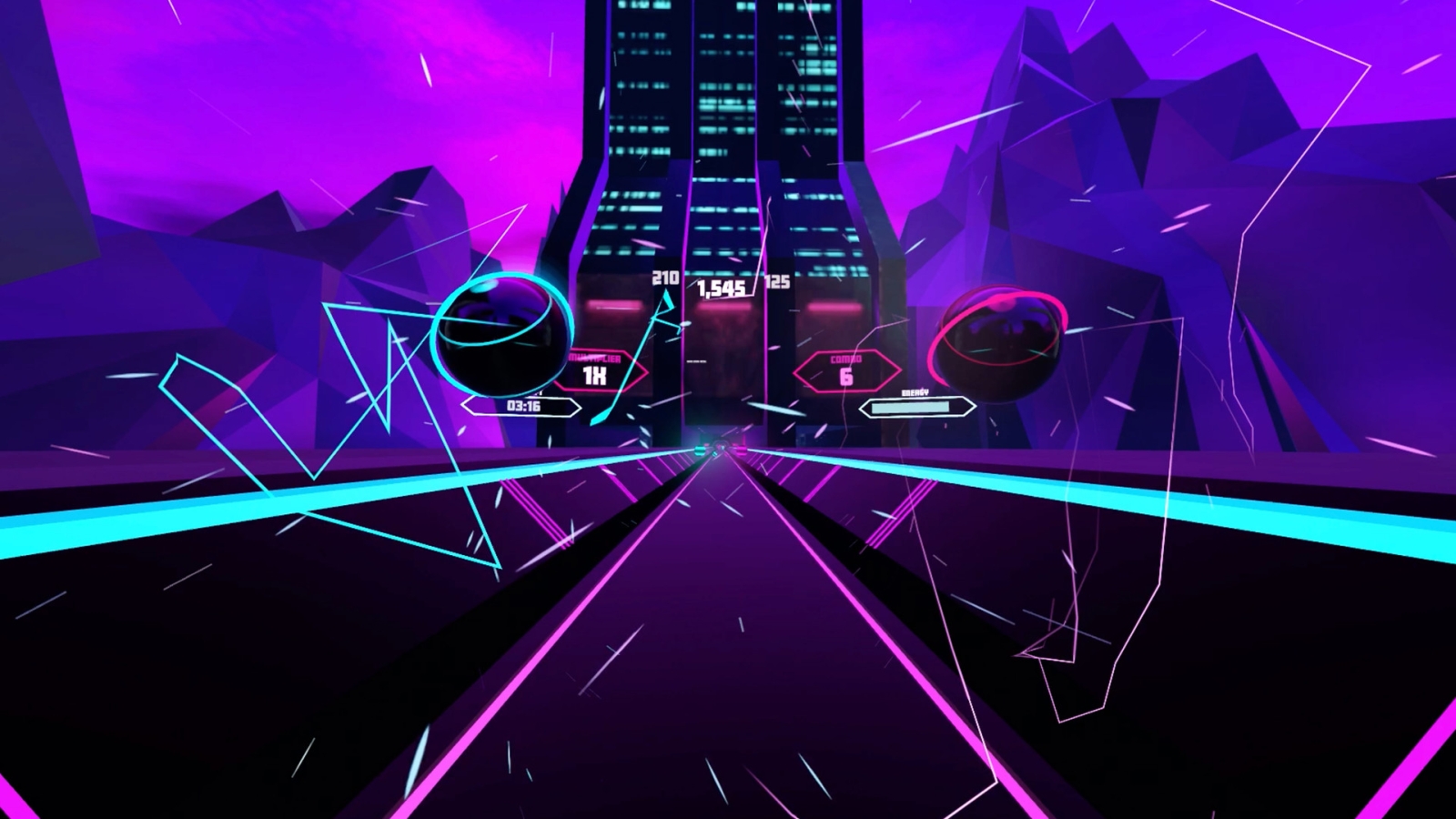 I’m always on the lookout for the next party-capable VR game that can serve as an introduction to the medium. There are “experience” games aplenty, and power fantasy games like Gorn are always a hit, but it’s music games that always draw people in. Synth Riders looks to deliver a fresh experience that is easy to pick up and impossible to put down. Given how hard it was to get me to put down the headset so I could even write this review, I’d have to say they may have succeeded beyond their wildest measure.

Any rhythm game, VR or otherwise, is held together by its soundtrack, and boy does Synth Riders have one hell of a soundtrack (which you can check out on Spotify right here). There are 31 tracks from artists you know (if you are into this scene) including Jeremiah Kane, Occams Laser, PRIZM, Sunset Neon, Overvad, Stilz, Dance With the Dead, Scandroid, Powercyan, Voicians and Celldweller. These tracks are an excellent start, and nearly every track is a hit, but developer Kluge Interactive has an ace up their sleeve — custom songs are natively supported. Not only that, but the game includes a free editor to drop in your favorite tracks without the need to worry about mods or the next patch nuking it.

Aesthetically, the game is evocative of a neon-bathed cyberpunk world. Part Blade Runner, Neuromancer, and even Stranger Things, each of the seven levels (with more on the way) is a nod to amazing 80s nostalgia. One has a pair of female sphinxes that resemble the Southern Oracle in The Never Ending Story, another has a massive Max Headroom-like head in the background that tracks to your VR HMD. Another level has massive 80s mixtapes floating monolithic above your head. Like Rock Band, it’s a little hard to focus on all this eye candy because there’s a whole lot going on in the foreground.

There’s no way around it — if you are going to review a VR rhythm game, you will have to compare it to the current leader, Beat Saber. Where Beat Saber is about swiping in the right direction at the right time, Synth Riders puts two spinning orbs in your hands, blue on the left, and purple on the right. Color-matched orbs flow towards you, and you have to put your hands in the right position to intercept them. Unlike Beat Saber, Synth Riders has hold notes that look like rails. These hold notes ask you to hold the correct colored orb in that position, “riding” the rail up and down with the rhythm. You’ll eventually encounter green orbs. Green orbs can be hit with either hand, though once you choose you have to stick with it until the end of that sequence. Orange orbs, on the other hand, require that you overlap your hands and hit them together. It sounds simple…

As you can see, while the concept sounds simple, that doesn’t mean it’s in any way easy. The videos in this article cover normal, hard, and expert difficulty levels, but there is also an easy level at the low end, and a master difficulty on the top end. The easy mode is incredibly easy, creating a very low barrier to entry for novice VR gamers, and master offers the same chaotic insanity combined with memorization of any other rhythm game at the highest levels.

Beyond the difficulty levels, there are three gameplay modes in Synth Riders. The first is the normal mode that you’ll see in the videos with this article. The second is a “Force” mode where you have to strike at the orbs, with stronger strikes (which you can see with a handy meter for each hand), and higher scores awaiting those who can get a good punch in. The third mode is Challenge, unlocking all of the constraints and letting you tweak the level parameters like how fast the notes come at you, or whether you have to deal with obstacles, for example.

Any VR game with this much speed and movement is naturally going to make people wonder if nausea is a factor. As you can see, there is a great deal of high-speed action for your eyes to contend with, but I’m extremely happy to report that neither my wife or I felt any nausea whatsoever. Despite all of the physical movement, dodging, ducking, and otherwise staying very active, I didn’t have a single moment of queasy-ness.

I did encounter one strange bug that reminded me of something out of The Ring. There are a handful of avatars you can choose from (or you can turn avatars off completely), but if you select one, you’ll see their upper torso and hands as you tackle the level. At the end, however, the avatar reverse-crawls back to you, snapping onto your body in the creepiest way possible. Thankfully, that visual hiccup is the only bug I found. Beyond that, the game runs flawlessly.

I finished out the last two hours of Synth Riders with a quick check of my pulse. I’m hitting my 3rd and 4th heart rate zones, and I had a ton of fun while doing it. Get off your couch and try this out; you just might put a smile on your face, and you’ll absolutely get a sweat going while doing it.

Synth Rider’s 80’s neon wave aesthetics and incredible soundtrack combine with simple but challenging mechanics to create one of the most entertaining and engaging VR games I’ve played in quite a while. Come for the fresh beats, stay for the great workout.

Ron Burke is the Editor in Chief for Gaming Trend. Currently living in Fort Worth, Texas, Ron is an old-school gamer who enjoys CRPGs, action/adventure, platformers, music games, and has recently gotten into tabletop gaming. Ron is also a fourth degree black belt, with a Master's rank in Matsumura Seito Shōrin-ryū, Moo Duk Kwan Tang Soo Do, Universal Tang Soo Do Alliance, and International Tang Soo Do Federation. He also holds ranks in several other styles in his search to be a well-rounded fighter. Ron has been married to Gaming Trend Editor, Laura Burke, for 21 years. They have three dogs - Pazuzu (Irish Terrier), Atë, and Calliope (both Australian Kelpie/Pit Bull mixes).
Related Articles: Synth Riders, VR
Share
Tweet
Share
Submit