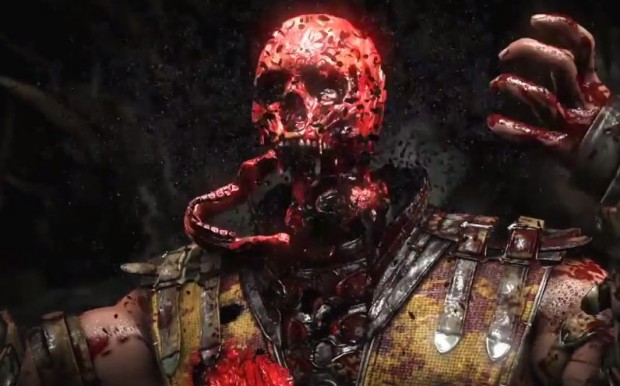 The Mortal Kombat series has a long-running record as one of the best 2D-fighters of all time, so it is no small matter when I say that Mortal Kombat X is without a doubt the best Mortal Kombat. Brutal X-ray attacks, bloody uppercuts, and downright cringe-worthy fatalities, all of the gruesome ingredients are here that players know and love. But developer NetherRealm Studios didn’t stop there, adding new characters, environmental attacks, and new characters along the way. NetherRealm Studios has improved upon the familiar, while adding strategic additions and enhancements that make Mortal Kombat X one of the best 2D-fighting experience to-date.

Combat–uh, I mean “Kombat” will always be the most important element of the Mortal Kombat franchise, and Mortal Kombat X is no exception. True to it’s roots, the action is fast-paced, well-balanced, and gorey as all hell. Slow-motion x-ray attacks make a return, as do the iconic special attacks like Scorpion’s “Get over here!” spear attack, and of course no Mortal Kombat game would be complete without fatalities, which feel particularly inspired this time around.

Although the formula for combat has largely remained the same, there are a few tweaks here and there, the most noticeable of which is environmental attacks. Each stage has few items that the fighters can utilize in combat, like a tree branch that can be swung from, or a pot that can be thrown. If you’re like me, then when you play Mortal Kombat, you often find yourself being backed into one of the edges of the stage and getting pummeled, which is one of the situations that environmental attacks can usually help with. Now instead of blocking until death, the player can grab a crate from the edge of the map, and smash their attacker’s face in with it. The environmental attacks add a fresh twist, and also lend a much-needed unique feel to each stage.

Mortal Kombat has always been best when played with others, and the multiplayer offerings this time around are fairly varied. Head-to-head battles present a classic competitive experience, team battles offer a five-on-five tournament style, and King of the Hill mode returns from Mortal Kombat (2011), which simulates the timeless tradition of shouting “I play the winner!” by creating a queue of players that spectate and take turns fighting the reigning champ.

Unfortunately, multiplayer is best played offline, as Mortal Kombat X suffers from occasional latency and choppiness that is prevalent in nearly every fighting game. In some online matches that I played the lag was bad enough to ruin the experience altogether, but most times it was a small delay and amounted to a minor annoyance. I only played online for a few hours (i.e. as long as it took me to win a single match), so it is possible that my experience is not reflective of most people–I am hoping that this is the case.

Mortal Kombat X has a roster of 25 characters (including DLC-character Goro), each of which has three distinct fighting styles for the player to choose from, so there’s no shortage of variety. Most of the characters available are ones we’ve come to know and love, but players will quickly fall in love with the excellent new characters like Cassie Cage and Kotal Khan. Weirdly, some characters that appear in the story mode of the game are not playable, like Baraka and Sindel. At the time of this writing, modders have already been able to make some of these playable, but it seems like a strange decision to not make these returning characters available from the get-go.

Mortal Kombat X also offers an excellent new addition called Living Towers. In this game mode, players can climb to the top of towers by winning matches with different modifiers. The matches get more challenging the higher the player advances, and the towers “rotate”regularly, meaning that all of the stages on each tower change. In one Living Tower level, I fought Scorpion at superspeed, and in another I fought Raiden in low-gravity. These challenges give Mortal Kombat X an extremely high level of replayability, and essentially mean we’ll get a never-ending stream of content.

Whether the player is working their way through story mode, fighting online, or taking on the Living Tower challenges, they’ll be rewarded with “koins,” which can be used to unlock concept art, new fatalities, and more in “The Krypt,” a first-person dungeon minigame where the player explores and gathers loot. Additionally, experience points are earned by playing, and give the player access to customization options for their online profile.

Finally, the most major improvement to the Mortal Kombat series is the story. Mortal Kombat X delivers a great story that takes place 25 years after the events of Mortal Kombat (2011). The Elder God Shinnok was defeated 25 years ago and sealed inside of an amulet, but after many years of peace turmoil brews in the Earth Realm and in Outworld. A new generation of combatants must rise to defend EarthRealm and Outworld from the imminent return of Shinnok.

Mortal Kombat X improves upon a classic franchise in nearly every way. From its surprisingly impressive story, to its great new characters, to its expansive amount of new content, Mortal Kombat is a must-play for any fans of the series.

You know that jerk online that relentlessly trash talks you after every kill? That guy was probably Travis "Tie Guy" Northup. Competitive, snarky, and constantly wearing a tie, Travis has been writing his opinions about electronic media since he was a teenager, and is pretty much the only person to hold his opinions in high regard.
Related Articles: Mortal Kombat X
Share
Tweet
Share
Submit