The world of Bandit Point is sci-fi meets pirates meets fantasy. After being saved from an impoverished life by a rebel robot leader, you’re immediately tasked with bringing down the tyrannical rule imposed by the Queen. As you progress through the short levels with the handful of enemy robots that you can possess, each with their own unique set of abilities, you’ll face mini bosses and eventually the Queen herself. Though the game isn’t challenging and is deeply linear, it’s a unique experience if not for its gameplay.

The art style is fun and quirky, with each robot designed significantly differently from the others; it feels like each has its own personality. The Archer robot feels like a jaunty Robin Hood, while the Jouster robot acts arrogant and pompous. It’s great to see this title taking a less serious approach to its art, as other VR titles that have high fidelity textures can be a bit harsh on the eyes. I deeply enjoyed being dropped into a world where everywhere I looked felt like something out of a children’s fantasy book. 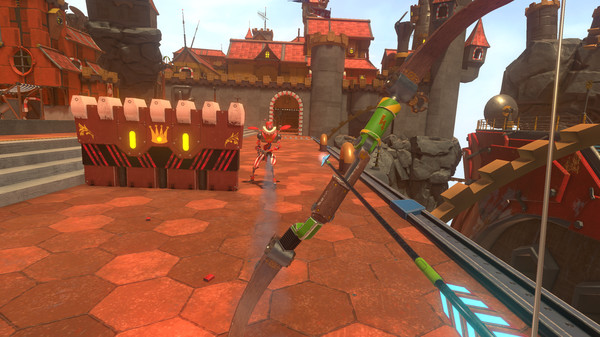 The art style was a refreshing change of pace.

The only thing clashing with the art style was the dialogue. The first of a handful of characters you meet is a big friendly robot that burps like a pirate and occasionally swears like one too. Here, it felt like the devs wanted to take out the childish feel of the game immediately by introducing a character that cusses out the Queen and her lackeys. That was a bit jarring, as I couldn’t put my finger on if they wanted to take the title in a direction that a child would look at and immediately enjoy, or a more Rick and Morty tone. Although I’m not predisposed to dislike either of them on their own, together the two styles just felt confusing at times — especially when the majority of the robots are so joyful and merry.

The story by itself felt lackluster, and I was more interested in shooting and zapping the robots than doing much of anything else. I was hoping at the end of the game I’d be given an arena mode to play in, but after the credits rolled the game returned to the base and I could only replay any of the missions if I wished. For the story, it was so dispassionate that I felt more like an NPC than anything else. I didn’t feel like I was in control of anything. You’re tasked with clearing out robot enemies in order to complete your task at the end of it, this being to save a friend of the rebellion, kill the mini-bosses that are the Queen’s henchmen, or take control of some piece of land for the greater good. That’s all there is and these three goals are recycled through a handful of levels. Sprinkled in are some simple battles on the deck of your airship against a much larger foe, but again all you do is fight robots until the timer runs out and a pre-scripted event happens. I don’t mind fighting robots, especially when the gameplay is a lot of fun, but it felt like the story came last in the development process, and I didn’t feel like I was having much impact on the world other than being a pain for the janitor crew having to clean up the mess. 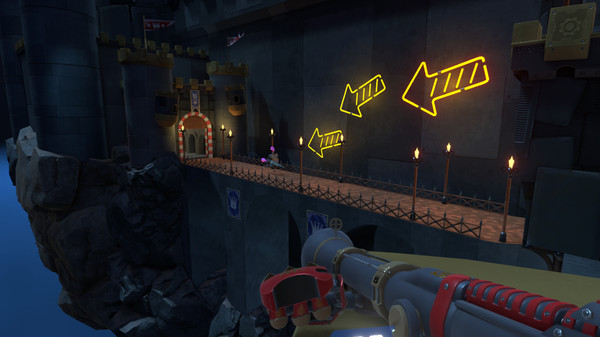 If it’s not the audio cues, you experience plenty of hand-holding with the number of signs directing you where to go.

Simply put, the gameplay is ok. I did enjoy jumping to the few good robots, taking on the bosses, and completing levels with no issue. Overall it’s very accessible, given that there’s a good selection of weapons to take on your enemies. The Archer bot is just that, a robot with a bow. With the bow fully drawn the arrow becomes electrified, dealing more damage. The biggest issue I had with this bot was the placement of the bow with the controller. It felt about 2 inches too low compared to where my hand should’ve rested, which meant for a lot of awkward aiming and bad shots. There’s the Officer bot, who has an electric whip that stuns enemies as well as a 6-shot revolver. I played this one a bit, but it felt pretty boring just flicking my wrist to electrify them, followed by reloading every few seconds. Equally as boring was the Jouster bot and Soldier bot. The first has you on horseback, towering over your enemies. Unfortunately, all you do is activate your drill and point it at enemies, while using your shield on the other hand to protect yourself. It was too easy clearing levels with this one, so I usually skipped playing it. The latter was just a bot with Bandit Point’s version of an assault rifle, vanilla and just as simple to use as the Jouster was. I enjoyed utilising the Rocket bot, who has two shoulder-mounted rocket launchers that cause as much destruction as you could imagine. However, that’s all that’s available to you. There are no swords, no throwing knives, and you can’t even do melee damage to the bots. 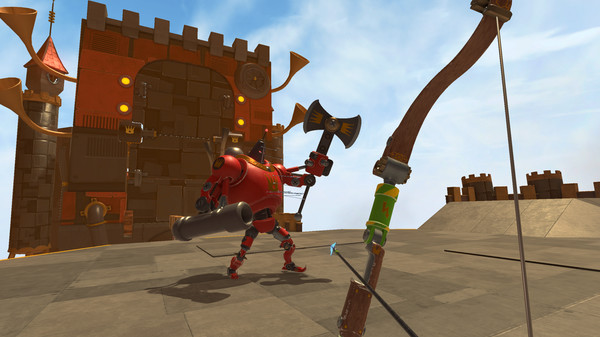 While I did enjoy some of my time with it, at moments it felt too point and click for a VR game. I’d have welcomed even more robots to control, or more things to do in the levels. Mixing fast-paced gameplay with some puzzle levels as downtime would have been a great idea, but all you’re playing is a nearly on-rails shooter. Additionally, the airship combat levels plain sucked. All you do is fight bots on two levels as they are shot onto your ship, while occasionally avoiding cannon fire and explosive barrels. Those levels were designed with the Rule of Three in mind, where you had to either fight 3 waves of bots or avoid three sets of explosions, or do these all three times. It was very obvious to see and quickly staled the gameplay because of how reused this formula is in gaming.

The one thing I deeply despised about the title was the grey near-death screen. It completely takes over your HUD, and flashes in and out of black and grey. Spider-webbed cracks appear as well, which makes it even harder to shoot, or even see enemies. It was incredibly dejecting to experience, and the only way to get past this screen was to hop to a new enemy. I didn’t mind doing so, as long as I could get away from that god-awful screen, it’s just frustrating to deal with. 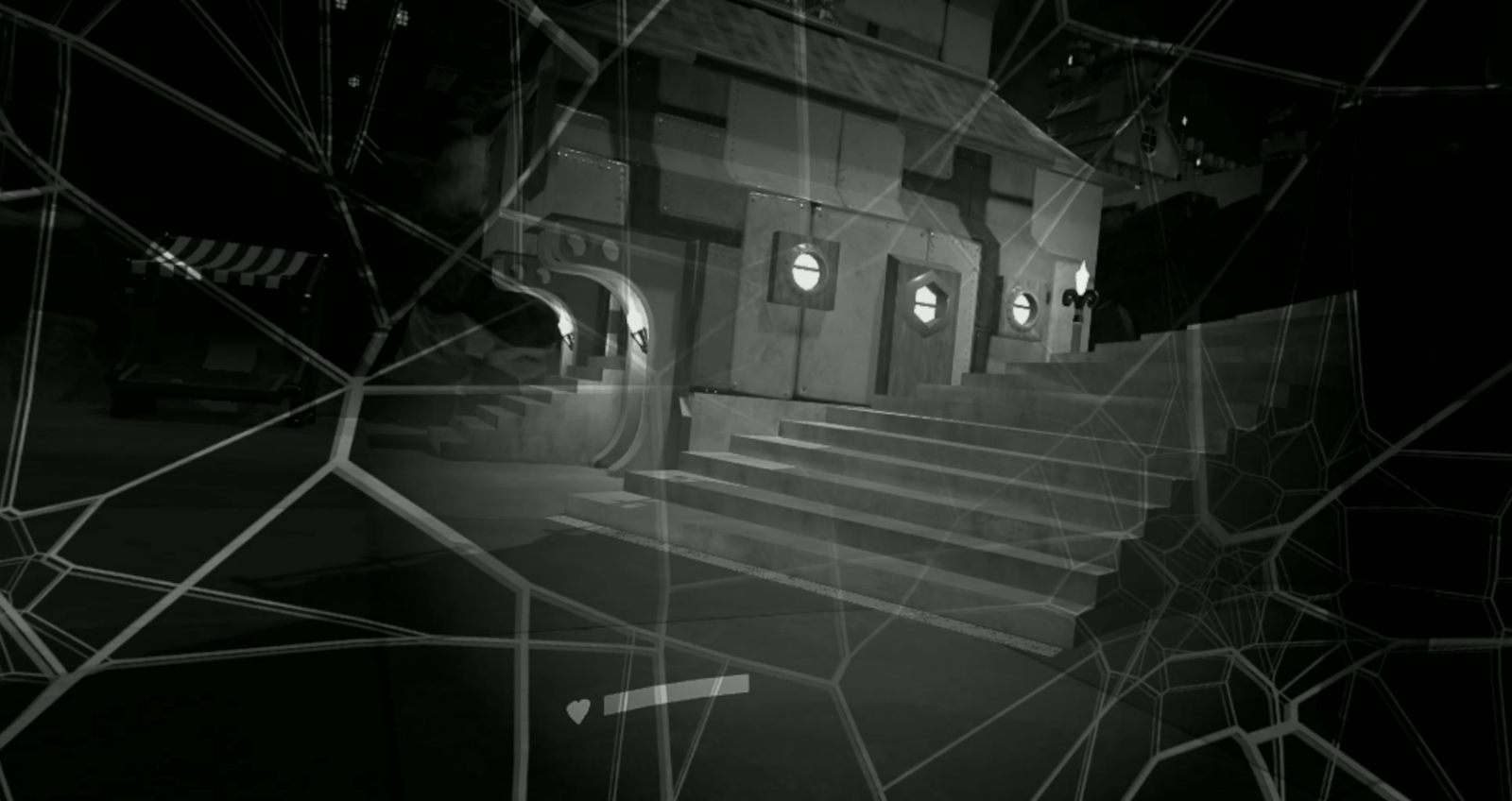 Easily the most frustrating near-death screens in all of VR gaming.

As for bugs, I experienced a very small amount. One forced my game to lock up on the loading screen as I booted back into the base, which in turn didn’t save my progress and I had to complete the mission again. This glitch could have happened at any point of my playthrough, meaning I’d have to run back through levels until the game recognised that it could save. The other one was just plain silly. On the final airship combat level, you’re tasked with using a massive double-barrelled cannon to take an airship down. The game expects you to jump out of the cannon’s controls once you hear an audio cue saying roughly “they’re sending robots onto the ship!”. If you do so, you just need to take them out, avoid the next set of explosives rained upon you, then you can jump into the controls. But, you can remain completely invincible so long as you don’t let go of those controls, meaning you can take down that airship the first time you’re given the opportunity to do so. The robots will keep firing at you, and you can’t fire back at them, but it doesn’t even matter. That’s quite a weird bug to not notice in QA testing.

I somewhat enjoyed my time with Bandit Point. It’s short, easy, and great for beginners to VR who want to learn the controls and movement options without dying too quickly. But, for someone who has been immersed with VR for a number of years, it felt more like a tech demo of the robots’ abilities than a fully-fledged VR title. I’d have liked to see more depth in the story or even more things to do in the levels other than fighting wave after wave of robots. The game could easily set itself up to be fantastic but falls short. If it wasn’t for the few fun robot abilities you’d be best spending your money elsewhere.

For only $10, it gets you a couple of hours of playtime and you can soon return it to the dusty corners of your digital library. It’s an ok VR title on its own that most should consider buying if they’re new to the platform to ease into VR controls. Though the story is very bland and it feels more like a concept than a fully-fledged title, it’s the gameplay that keeps you playing just that bit longer before you release how repetitive those levels are.

With a deep interest in writing, Ben followed that into a Journalism degree. As an avid lover for gaming, he is constantly expanding his library with console, PC, and VR games. He's obsessed with stealth games and loves hunting down the smallest of details inserted by devs.
Related Articles: Bandit Point, VR
Share
Tweet
Share
Submit