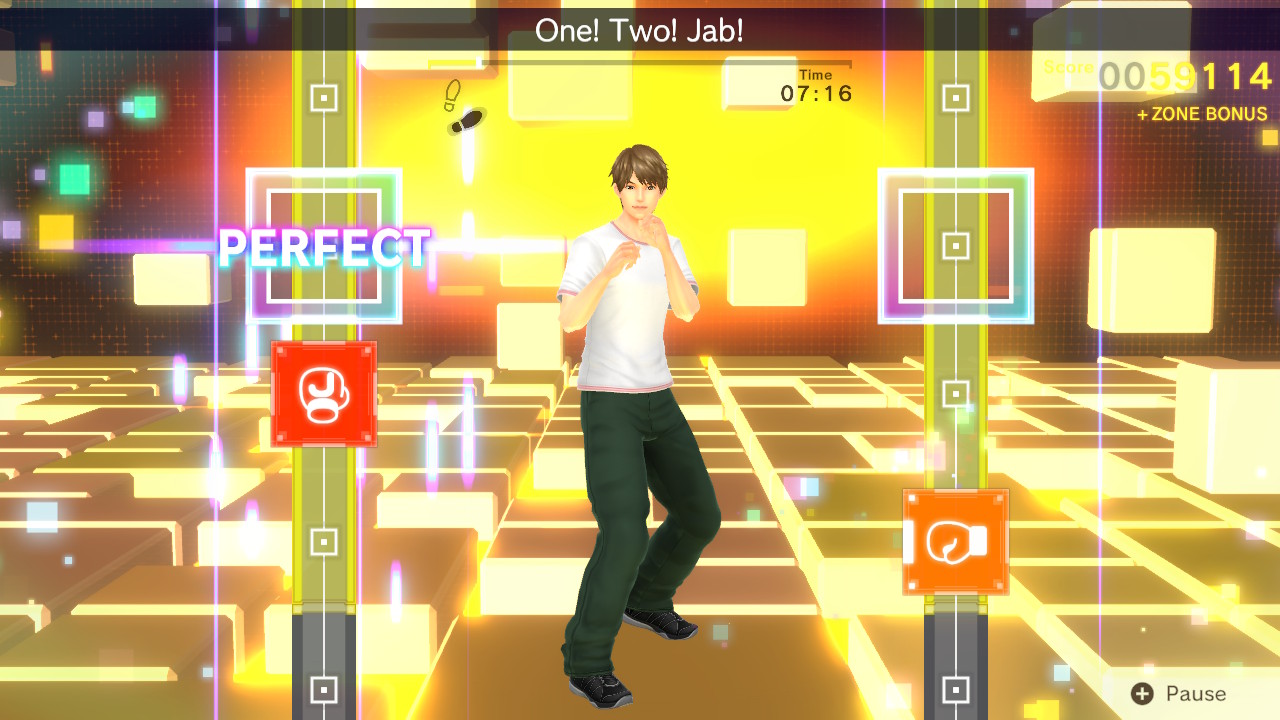 While a lot of people credit a game like Animal Crossing: New Horizons as getting them through the past few months, I’d say that 2019’s Fitness Boxing was one of my most important games during the pandemic. At a time when the gyms were closed in my area and I had a bit of a health scare, I needed some indoor exercise in my life, and Ring Fit Adventure was always out of stock. With its simple but vigorous motion prompts and ability to play it wherever thanks to the Switch’s tabletop mode, I was able to get my health back in the right direction until places of exercise reopened. To say I was excited for Fitness Boxing 2: Rhythm & Exercise this year was an understatement, but while I appreciate the improvements from the previous game, there are a few issues that plague this sequel from being an instant recommendation. 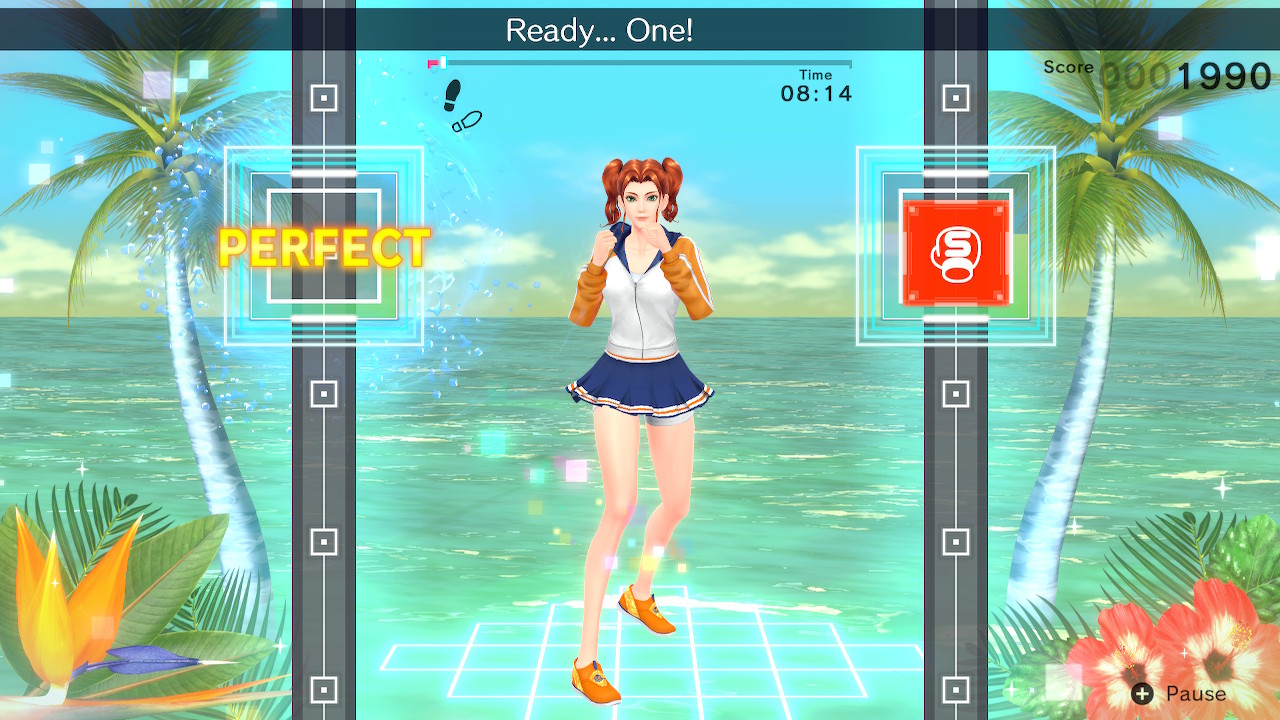 If you’ve read our Fitness Boxing review, you’ll know what to expect going into Fitness Boxing 2: Rhythm & Exercise. Using your Joy-Con controllers, you’ll have to do a series of punches, uppercuts, and dodges in order to finish the routines given to you. Your instructor will help guide you through getting into the rhythm of your movements and will provide encouragement during your workout.

There isn’t much that’s changed from the core gameplay, but now there’s a score display (that functions differently from your fitness age score), so it feels more like a “game” than a “fitness program”. In addition, there’s a zone bonus that you can obtain once you hit enough actions, where the screen goes into overdrive and you can rack up more points. Icon prompts are large enough that you can see easily, and while the game might not recognize every movement you do, it’s accurate enough to make sense. It’s a simple structure that anyone can understand, which is great for a title like this.

First, let’s get into the additions, which are mostly for the best. From the start, the returning instructors come back along with three new ones. While I still think the voice acting for the original instructors is endearingly cheesy, newcomer Janice is peppy and has a strong voice performance, which I appreciated. I tended to gravitate towards the sole male addition Hiro, and Karen was used for a couple routines. Thankfully, each instructor comes with more voiced lines, and the variety helps when playing this game as a fitness program a few minutes a day. 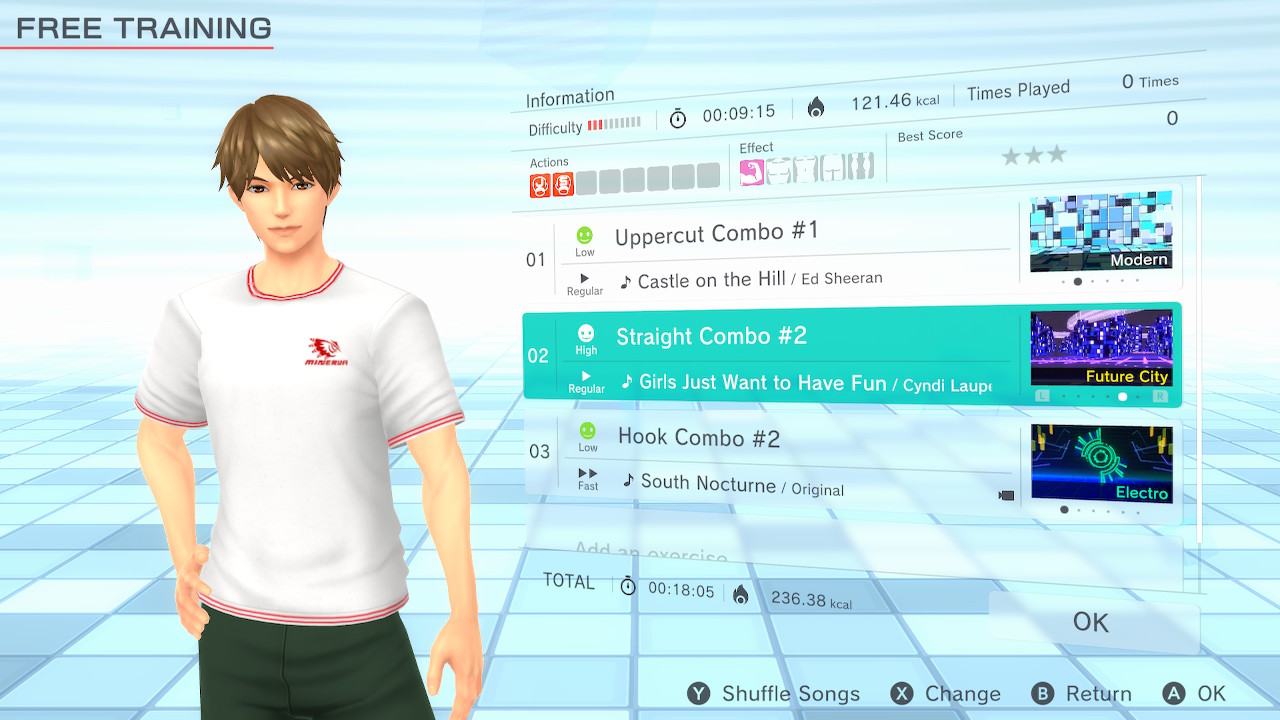 Speaking of in-depth content, the fitness tracker and customization options for this game are vastly improved. While the daily workout and free training modes (as well as two-player functionality) remain, you can now select your routines with a greater degree of accessibility. From your personal profile, you can choose to skip certain motions when determining your daily workout (which will pick songs and routines at random), and even if you want to auto-score certain moves. Free training also has an option to make a playlist of routines, which means you no longer have to rely on random playlists or manually picking one song each time.

Fitness Boxing 2 also has post-release DLC, which at time of writing only includes a third “no mercy” difficulty for returning instructors Lin and Evan. These routines are seriously strenuous and will challenge fans of the first game. (Doesn’t help that these versions of the instructors are more energetic and less forgiving when you make a mistake.) The calorie tracker and fitness records seem to have gotten a facelift, and as a result everything feels flashier and more worthwhile. You can even carry over your progress from the first game here, and as such this feels more like a continuation of your previous regimen. The developer put some more time and effort in the graphical overhaul, and it shows. 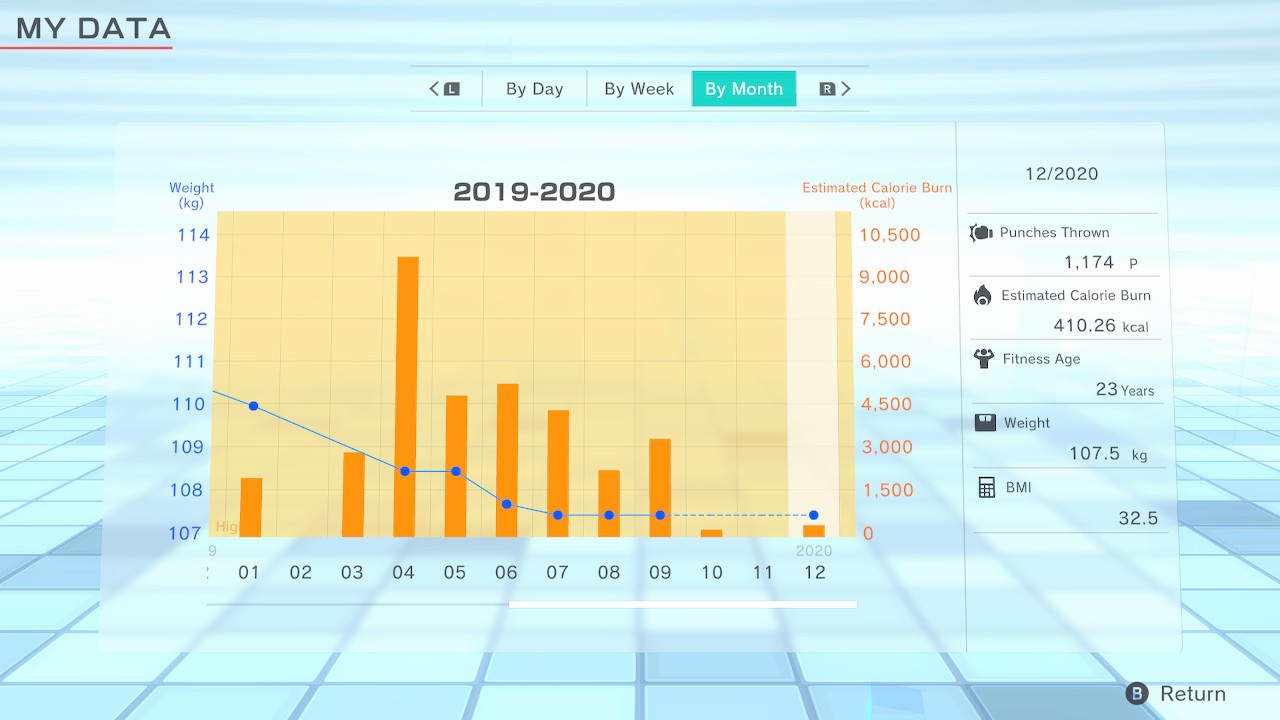 Unfortunately, what also shows are the technical issues. While the first Fitness Boxing was graphically underwhelming, it was a fine-running game, with the ability to run the game portably as a big plus. I’ll admit Fitness Boxing 2 is a better looking title than its predecessor, but that comes at the cost of the game slowing down and having way more framerate drops than the first game. There were times when I would reach my zone bonus in the workout and the game would start to slow to a crawl; not enough to be unplayable, but my movements would take longer to register (and I would miss one or two when this happened). Playing this game in tabletop mode feels uncomfortable too, which is a shame since the first Fitness Boxing telegraphed its important information clearly. Here, the time remaining blends into the background and I had to squint my eyes to see how many more minutes I had left in a routine. The performance becomes even worse in tabletop mode, which is a shame considering this is obviously a great tool that could be used potentially anywhere. 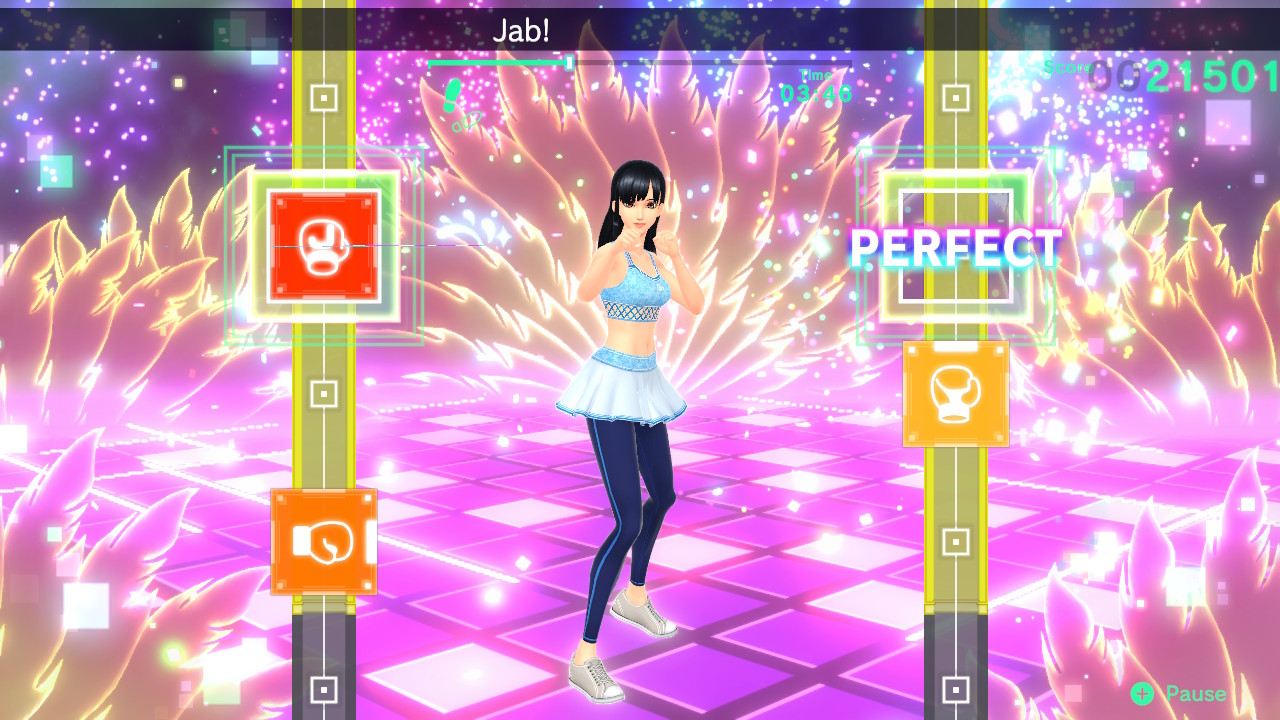 Finally, in terms of the songlist… it’s a mixed bag. New to this title are three original songs made just for the game, which are serviceable EDM tracks that act as a way to pad content but also allowing video capture without copyright claims should you want to stream or post your accomplishments through video. The base game has 20 licensed tracks, but even saying licensed is a stretch since they’re all instrumental covers. While this means that there’s more freedom in stretching a 3 minute song into a 10-12 minute routine, that also means the MIDI-esque quality of the music is painfully clear. The faster songs and retro disco tracks like Can’t Hold Us or Venus hold up quite well, but songs like Castle on the Hill and I’m an Albatraoz sound atrocious compared to the originals. Some of the songs sound worse than the last game, and that’s saying something.

While Fitness Boxing 2: Rhythm & Exercise hosts a number of improvements that will complement your workout, there are a host of technical issues that make this a worse performing experience. If you can get past the underwhelming music and slight slowdown, however, you’ll find a wonderful exercise program if you stick with it.

Elisha Deogracias is an aspiring accountant by day, freelance writer by night. Before writing for Gaming Trend, he had a small gig on the now defunct Examiner. When not being a third wheel with his best friends on dates or yearning for some closure on Pushing Daisies, he's busy catching up on shonen manga and wacky rhythm games. Mains R.O.B. in Smash. Still doesn't know if he's a kid or a squid.
Related Articles: Fitness Boxing 2: Rhythm & Exercise
Share
Tweet
Share
Submit