I’m going to be entirely honest here, I was not ready for just how powerful and moving a story Necrobarista would turn out to be. I went in expecting a ridiculous, if not very stylish, visual novel about a barista who tries to raise the dead, and I was unprepared for the amount of wit, introspection, and sheer crushing emotional weight of this game. I was so spellbound by the story that I had completed my first playthrough before it even occurred to me that it’s completely lacking in one key component of the visual novel genre. Settle in, because I’ve got a lot to say about this bizarre, beautiful game.

Necrobarista tells the story of The Terminal, a strange little cafe perched between the realm of the living and that of the dead. It’s run by the cheerfully morbid and always stressed Maddy, with the help of her mentor, Chay, the long-lived former owner, and Ashley, the brilliant, unstable, robot-obsessed child genius. Maddy is facing a number of challenges, the most obvious one being a ‘time debt’ which the Terminal has built up. 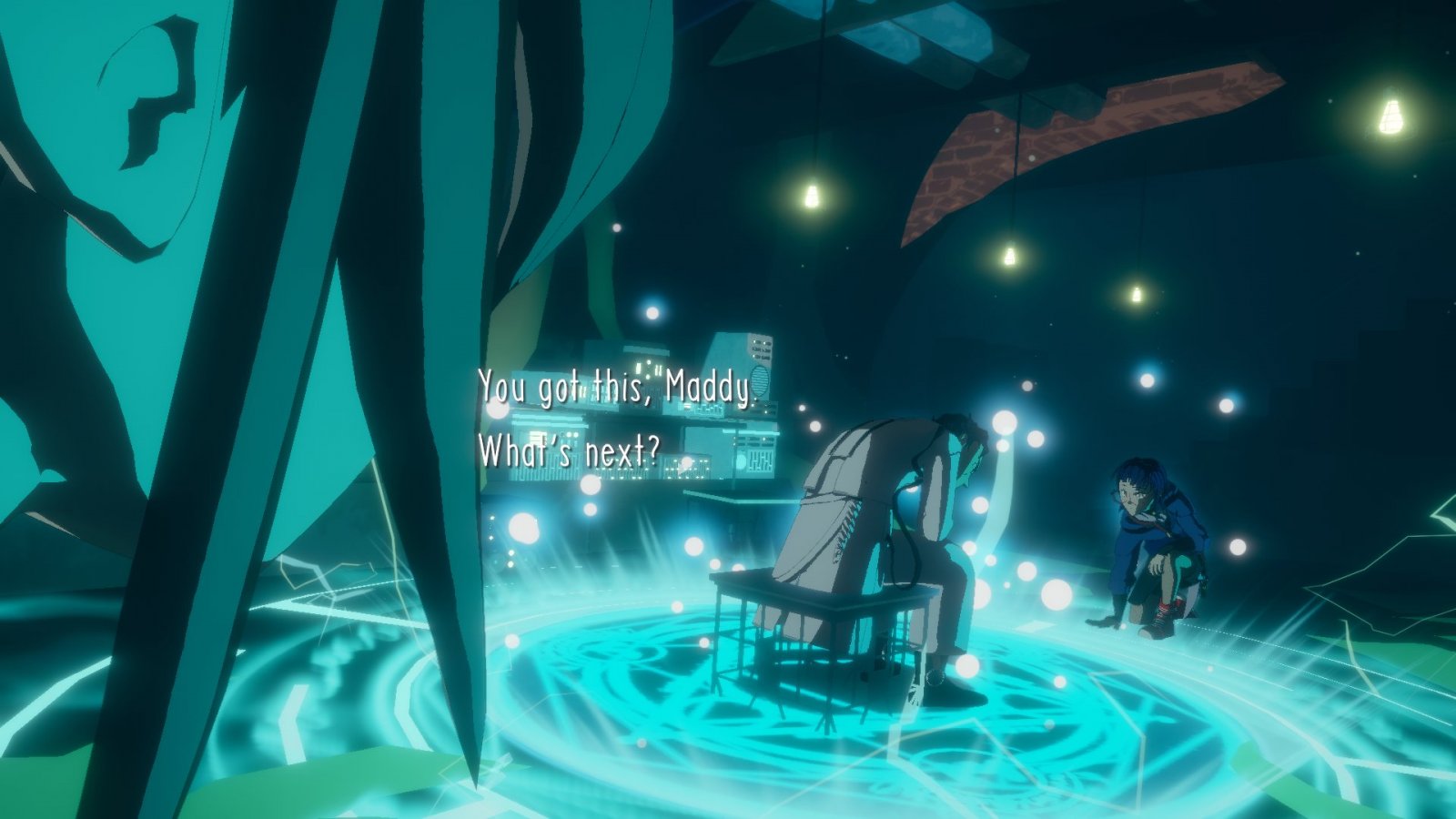 You see, while the Terminal may be located in Australia, it also sits squarely on the threshold between the worlds of the living and the dead, and caters to clientele on both sides. There’s one caveat: the dead are only allowed to linger for twenty-four hours before they must pass on. Those aren’t Maddy’s rules; those who linger disrupt the natural order of things, create a time deficit, and the Terminal is charged for the deficit for those who choose to linger there. Snarky and emotionally repressed as she is, Maddy has something of a soft spot for the recently departed, and can’t bring herself to rush those lost and lingering souls into the next realm.

Enter Keshian, one such freshly deceased soul who is struggling to come to terms with his own death and his meager accomplishments in life, all while trying to muster up the courage to step willingly into the unknown. And then there’s Ned, an old friend of Chay who now works for the Council, the shadowy, bureaucratic governing body of the afterlife who is preparing to collect on the Terminal’s debt. He’s rather easy to recognize, as he wears a metal hat that covers his entire head. Necrobarista’s ten episodes jump back and forth across time, providing glimpses of these characters, their sordid histories, and filling in the gaps around the Terminal’s various secrets, Maddy’s ritual, and the overarching story one clue at a time. They also introduce us to a small host of supporting characters, each as quirky and charming as the main cast. Developer Route 59 even found a great excuse to slip in an alignment chart for the entire cast. 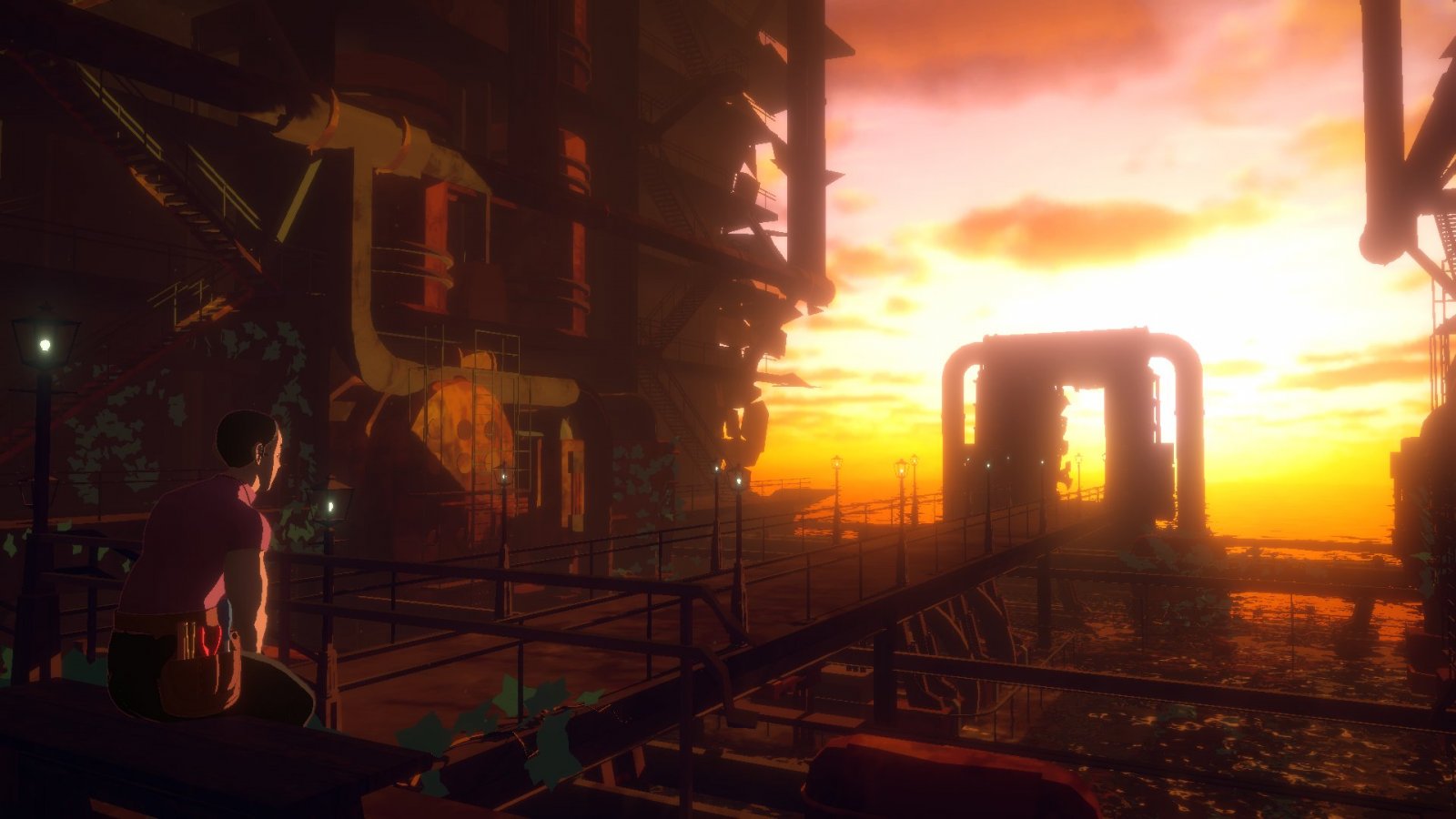 Necrobarista is a visual novel, but it also isn’t. It’s a cinematic visual novel, which means that you’ll be watching a series of click-to-progress cutscenes. The 3D scenes are cell shaded with striking color palettes. The entire game is high on style, and the parallax camera drift only adds to the surreal, supernatural feel of the entire game. Like in a visual novel, there’s no voice acting and you’ll need to click to progress, but rather than just seeing still portraits whose pose or expression may change, the characters in Necrobarista animate; their lips move to loosely mimic their dialogue, they gesticulate, move objects in time with clattering sound effects, and the camera pans in, swoops out, and slowly drifts to help emphasis the mood of any given scene.

The writing is stellar. It’s quirky, unexpected, insightful, and, at times, downright punny. I was not ready for the amount of philosophy, soul-searching, and mental health discussions this game would include. And, outside of the later chapters, when things all come to a head, it’s all done in a zany, funny, and genuinely entertaining way. Discovering the intricacies of Maddy and Chay’s relationship, the ritual, and their complicated history is half the fun of the game, so I’m choosing to remain purposefully vague in that regard. 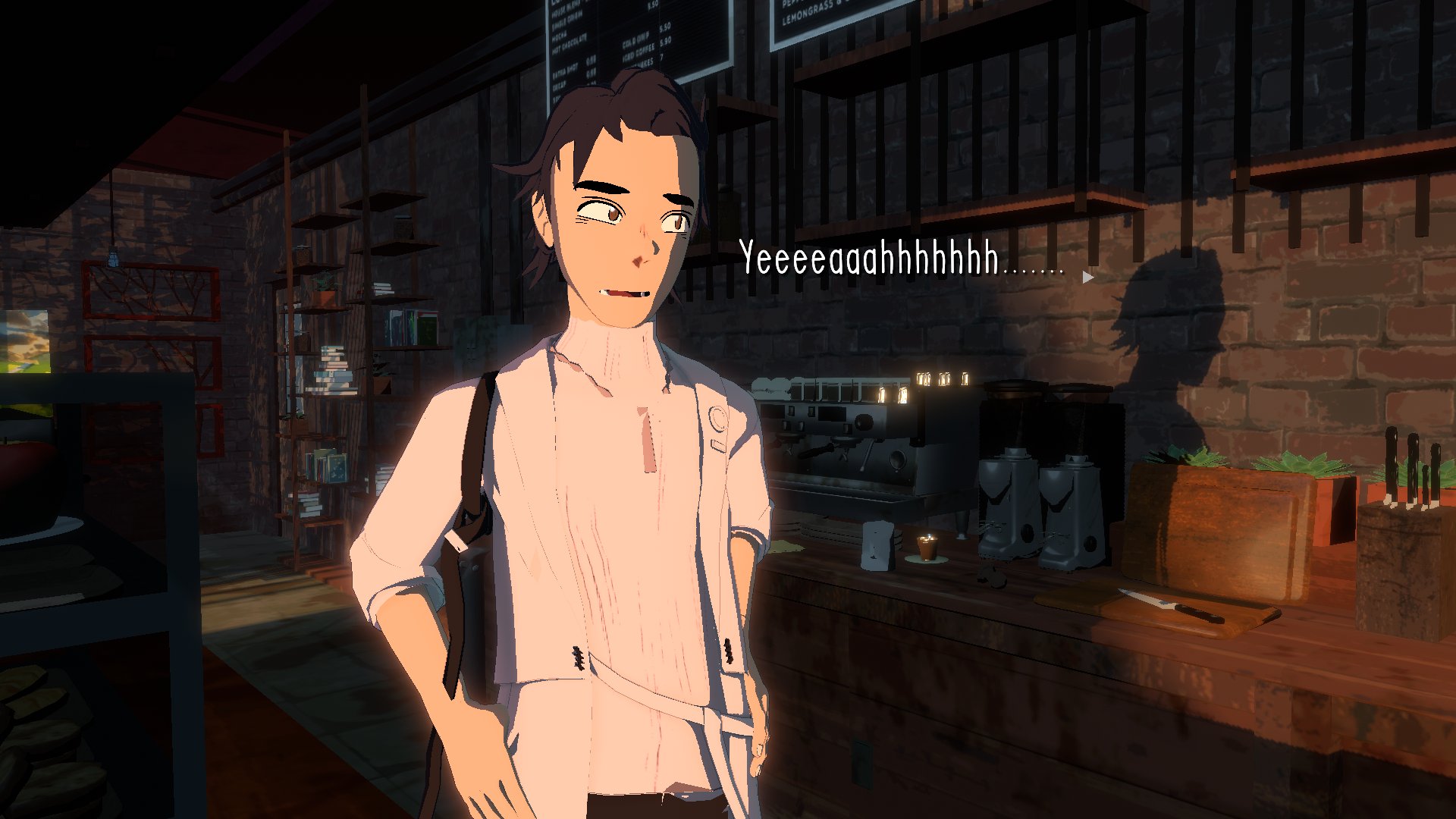 Necrobarista’s cinematics and writing are so good that I actually finished the entire game before I realized that I had never once made a choice. Picking between a limited set of dialogue options which changes how the scene progresses is a staple of the visual novel genre, but the Route 59 team has skipped this over entirely in favor of a system where you use words collected during the various episodes to unlock Memories scattered across the Terminal. During each scene, certain words will appear in yellow and you will, at the end of each scene, sit through a short and often silly conversation between three of Ashley’s robots. These quirky not-quite-creatures were brought to life with the aid of the souls of deceased animals, and their banter serves as a kind of distraction, something to make your brain lose the context of some of the words you just saw before you’re able to select them.

After each scene, but before you are turned loose to free-roam through the Terminal, you’ll be presented with all the important words from said scene. You’ll only be able to select a certain number of them, and once you’ve selected your words, context behind each word will be revealed. The context includes characters, locations, and even the Terminal itself, and each word will be converted into a token called a Fragment. Armed with these Fragments, you’ll be free to use your mouse and keyboard to wander around the Terminal in free-roaming first-person segments, where certain objects glow and hum with memory. You’ll need to use a specific combination of Fragments to unlock Memories, which reveal more of the history of characters both major and minor, as well as the lore of the Terminal itself. 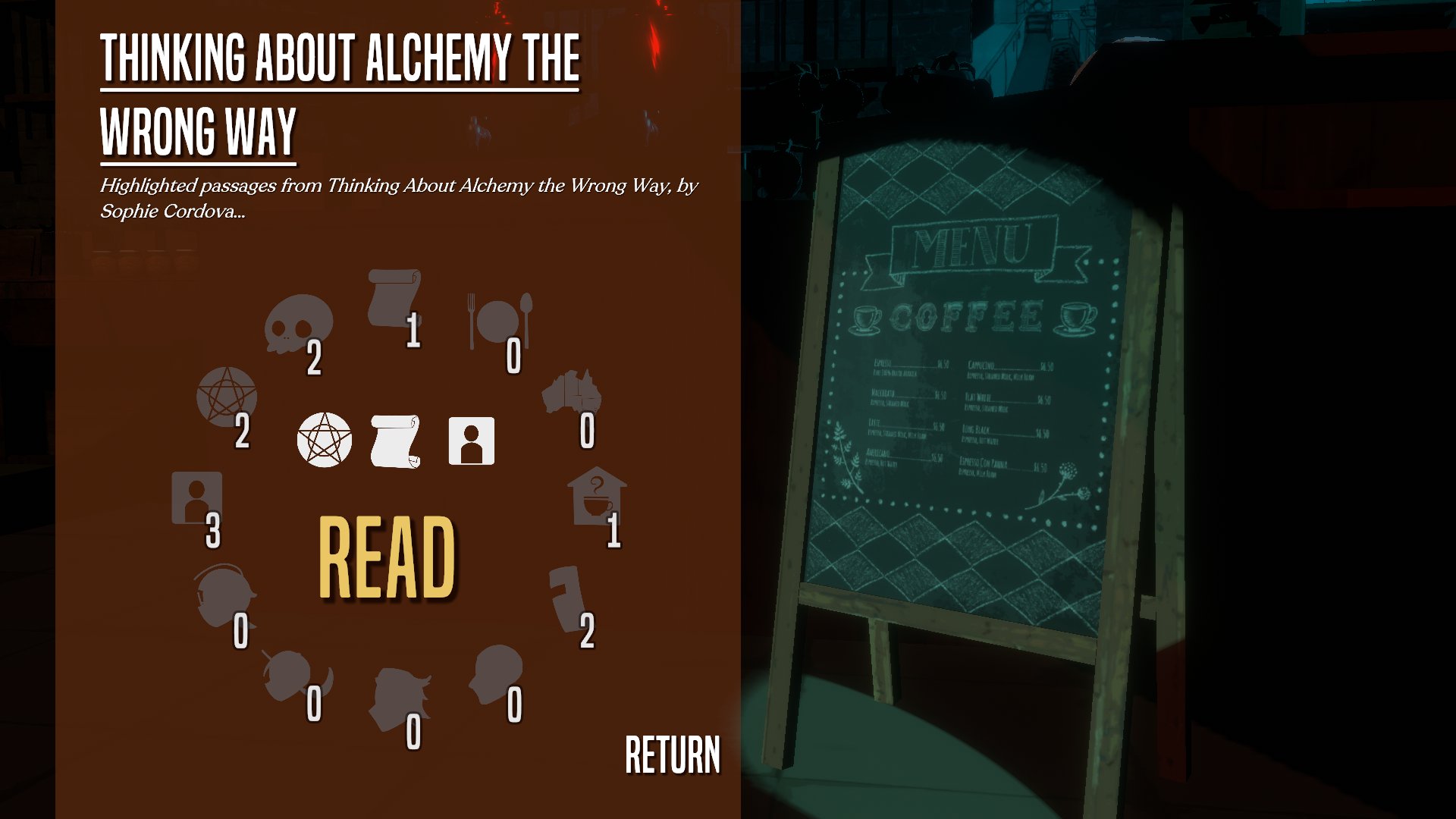 Memories are straightforward, text-only bits, and can vary greatly in both length and entertainment value. The text is sometimes broken up in odd ways, and quotation marks are often used liberally and incorrectly. This means that they can be a bit confusing, but they do a nice job of fleshing out the world and adding depth and background to several characters without adding significant length to the game itself. If reading isn’t your thing, you can complete the entire game without going through any of the Memories.

While Necrobarista is basically a series of cell-shaded, click-to-advance cutscenes, it is surprisingly resource heavy, certainly more so than your average graphic novel. My Microsoft Surface was able to run it on medium graphics, but not without significant load times, stutters, and completely throwing off the timing of sound effects. That said, my gaming machine was able to run it on high with only the most occasional of framerate drops. I will say that it took me a bit of time to learn to identify all of the game’s prompts; often the screen will go black for dramatic effect, and you will need to click to advance it. There is an indicator that you need to do so, but it is three tiny dots just beneath the cursor, which is easy to miss if you don’t know to look for it. More than once, I thought the game had frozen when I just needed to poke at the mouse once. 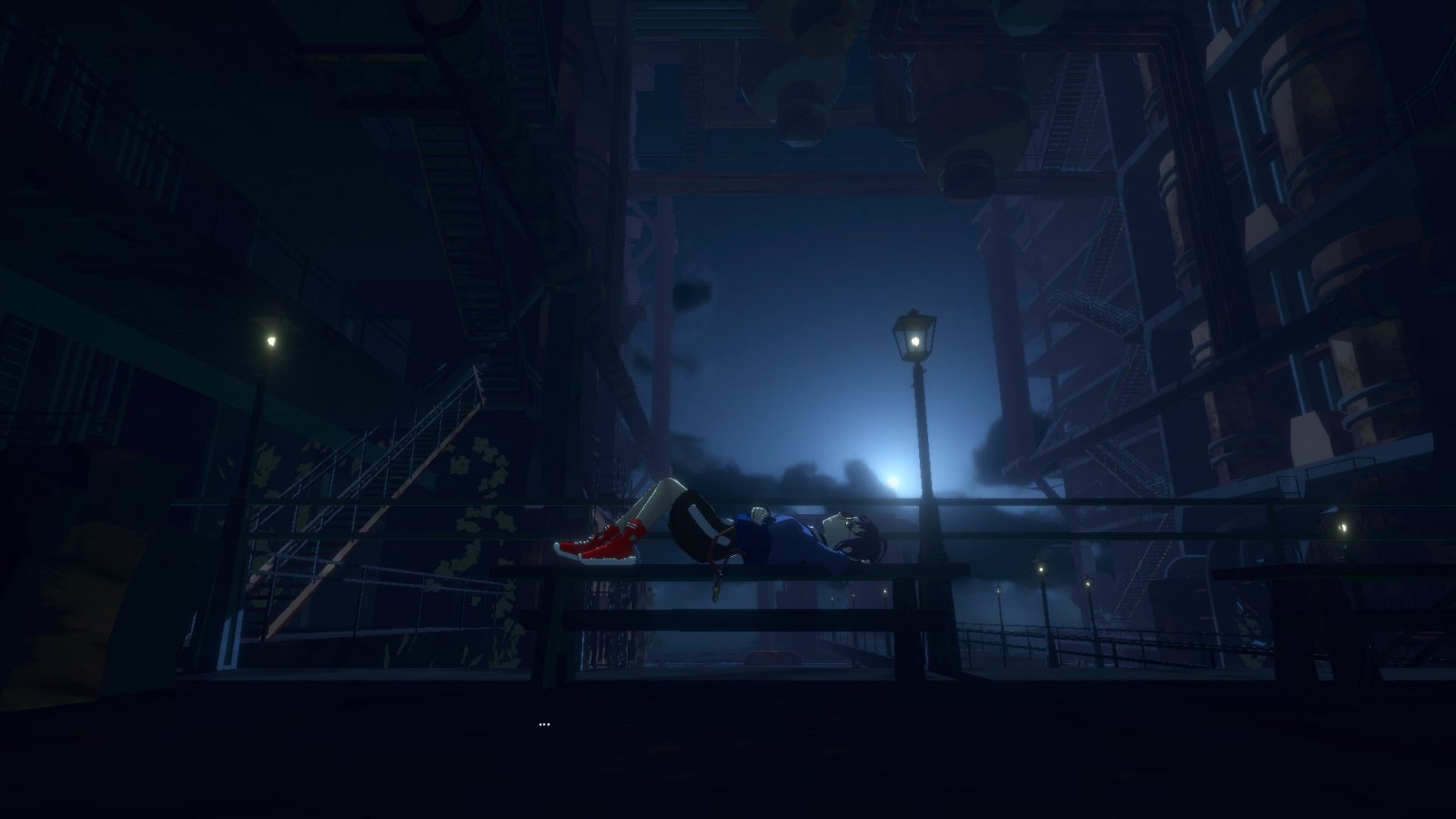 I would be remiss if I did not take the time to properly talk about how glorious the soundtrack is. Every song is amazing; from the melancholy Confluence, the main theme, to my personal favorite track, the upbeat, slightly suspenseful Nostalgia Trip, which I have found myself humming daily since I first got my hands on this game. I don’t often get excited about video game music, but I’ve found myself listening to these tracks on loop while working on other projects; the music, much like the Terminal’s coffee, is to die for.

Despite the deceptively silly name, Necrobarista is a surprisingly deep and moving narrative about loss, kindness, guilt, and the family you choose. Quirky, complex characters combined with an incredibly unique, unforgettable style and a killer soundtrack create a layered, captivating world full of secrets, spirits, robots, an underground fight club, and more than a few cups of really great coffee.