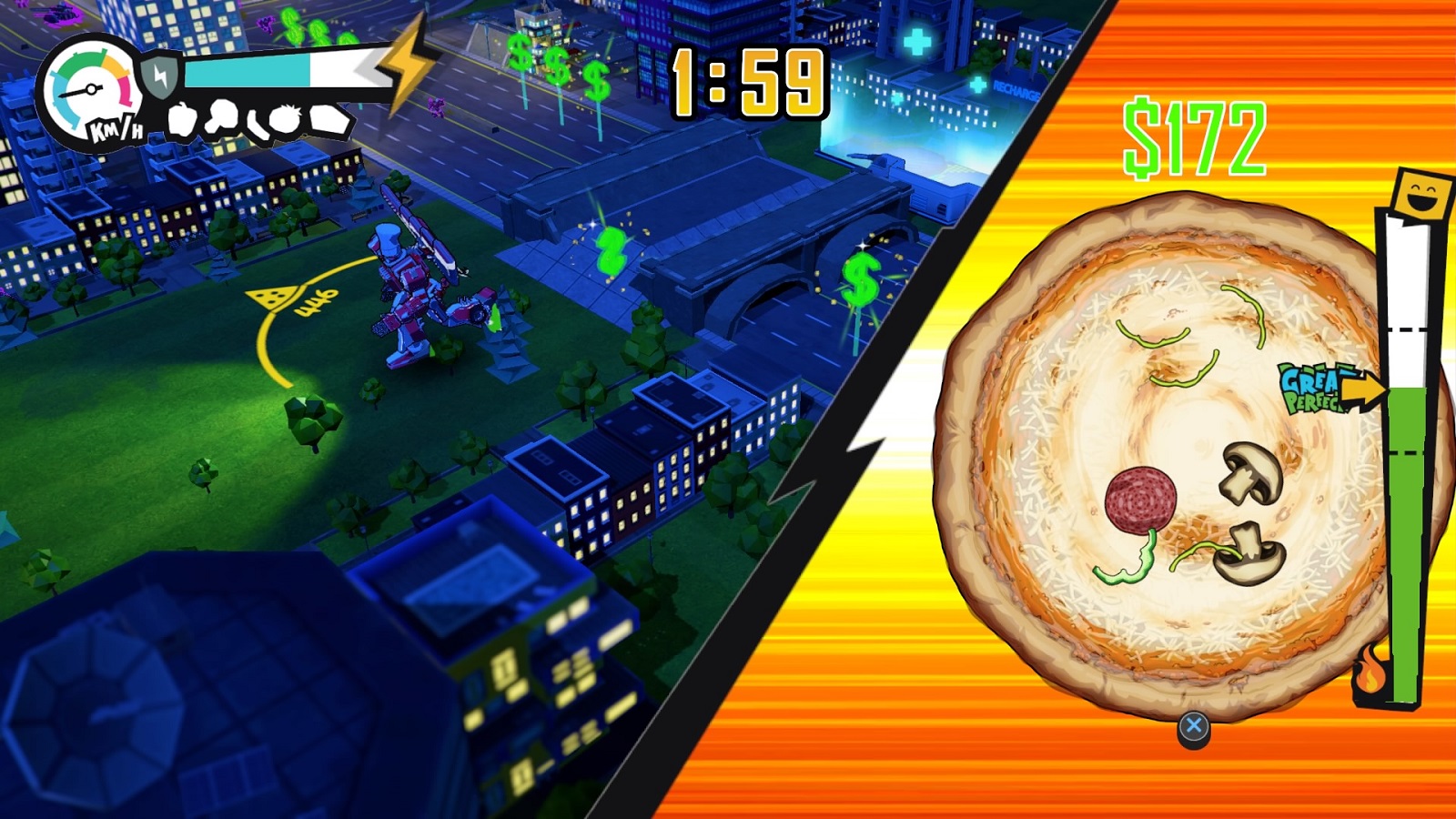 Considering I reviewed Sushi Striker: Way of Sushido earlier this year, I think it’s safe to say that I’m pretty familiar with food-themed games. In preparation for playing Breakfall’s Pizza Titan Ultra, I ate a bunch of sushi, but that’s not the point. Pizza Titan Ultra is an action-packed single-player experience that has a lot of cheesy charm, and it’s a very entertaining time for anyone who wants to play a game about one of the greatest foods in the world.

Pizza Titan Ultra hires you as the next member of the famous Ultra Pizza pizzeria in Galactic City. It’s a quaint little place with one advantage: Ultra Pizza delivers its goods with a gigantic mech. With your quirky cast of characters, from the leader Tanya to the timid Billy, you’ll have to rush through eight different worlds while dealing with the machinations of the dastardly Cheezborg, a washed-up animatronic that wants to destroy the competition with its cheezborg robots.

Throughout the 24-chapter story, you’ll take orders from a variety of colorful characters, each covering different pop culture references. These pre- and post-level cutscenes are easily the best part of the game’s presentation, as they’re chock-full of kitschy Saturday morning cartoon humor and heart. From a Bob Ross lookalike to a Carmen Sandiego-esque criminal that spouts out geographical facts while on the run, each of the clientele is a treat. The main recurring cast is also pretty neat, though the one-off characters steal the show. If there was one thing that I would improve, however, it would be the inclusion of voice acting or more dynamic cutscenes; they’re all text-based static portraits with the characters speaking gibberish, which are carried by the aforementioned humor but could have been improved by a few pictures. That said, it’s an overall fun little story that has its laugh-out-loud moments with its references.

There’s a lot to unpack in this picture.

The gameplay of Pizza Titan Ultra is rather unique, as it’s a cross between Crazy Taxi and Rampage, with a little Katamari Damacy mixed in for good measure. Each stage has a time limit in which you must complete your missions; in order to increase the time, you must pick up random, five-second time capsules or deliver pizzas across the stage, which are designated on the HUD. In addition to delivering pizzas, there will be a variety of missions during story chapters ranging from finding the five secret ingredients scattered around a stage (which will grant a huge money bonus if found) to destroying as much of the stage as possible. You can easily destroy most of the structures in a stage with no penalty (excepting a few missions), and for some reason it feels rather cathartic doing this for fun while beating up the different cheezborgs that impede your progress.

While you mainly move around to deliver pizzas, you have a few attacks at your disposal, from punches and stomps to thrusters which help evade missiles and other laser beams that can distract and even pummel you if you’re not paying attention. Throughout the stages are also walk-in deliveries, where you must complete a small minigame in order to make pizza on the go for a customer. The main gameplay loop is simple enough to pick up after the first few missions, but with stricter time limits and a variety of different obstacles in each stage, it can get a bit challenging later on. Thankfully, you can also unlock different super moves that can help you out, from the initial super sprint that will make you run fast once your energy gauge is recharged to a shield that will help block enemy attacks.

I found that the stages were big enough that exploring was fun and rewarding during the free delivery portions (where you’re not focused on clearing missions, just getting a high score by racking up money through deliveries and destroying cheezborgs), but not too large that it was overwhelming. They’re varied in atmosphere and design, and you’ll have to learn the ins and outs of the stage in order to deliver optimally and efficiently. It feels like the aforementioned Crazy Taxi, except with… y’know, a mech. Checking every nook and cranny in order to get secret ingredients is a fine challenge for those who want to get the highest amount of money, and you can use the funds to unlock different parts for your pizza mech. It’s a nice little way to track progression and encourage replay value, especially with the whole campaign lasting a little under four or five hours. Pizza Titan Ultra’s initial length doesn’t overstay its welcome and left me feeling satisfied by the time I was done with it.

The charm and goofiness of Pizza Titan Ultra shines with its bright graphics, which are stylized to feel like a 90s Saturday morning cartoon. You’ll hear robotic screeching from the cheezborgs you destroy, and running over or stomping them never gets old. (This is what reminds me of Katamari, as you can run over enemies as if you’re a wrecking ball.) It’s a story that never takes a moment to take itself seriously, and the payoff is humorous and entertaining.

Where in the world…

Pizza Titan Ultra is a fascinating experience, but not one without flaws. As a single-player focused game (in contrast with Breakfall’s multiplayer game Starwhal), there’s an emphasis on scores and mission structure, but I would have liked some sort of leaderboard in the package. This feels like a game that could definitely be used in friendly competitions, and would encourage dedicated pizza eaters to find different routes and strategies. In addition, there were a few minor bugs that didn’t crash my game but caused a bit of inconvenience. One time playing in the stage where you have to jump on a mountain, my mech clipped into said mountain, which ultimately made me fail the mission. The cutscenes, as fun as they are, are merely text screens with no variation in animation or otherwise (even the character portraits are static), which is a missed opportunity; I would have loved animated cutscenes or even still pictures to advance the plot. These quibbles are ultimately an anchovy in an otherwise delicious Canadian pizza; not enough to ruin the experience, but are still noticeable.

Pizza Titan Ultra is not delivery, but it’s delectably delicious. With its humorous premise and fun, entertaining gameplay, this little game will definitely put a smile on your face as you put evildoers to cheesy justice.

Elisha Deogracias is an aspiring accountant by day, freelance writer by night. Before writing for Gaming Trend, he had a small gig on the now defunct Examiner. When not being a third wheel with his best friends on dates or yearning for some closure on Pushing Daisies, he's busy catching up on shonen manga and wacky rhythm games. Mains R.O.B. in Smash. Still doesn't know if he's a kid or a squid.
Related Articles: Indies, Pizza Titan Ultra
Share
Tweet
Share
Submit