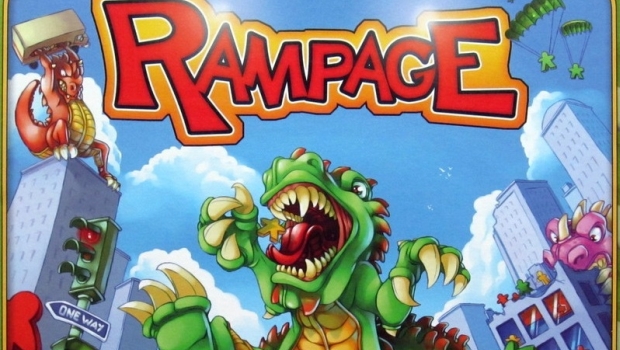 The only sport I enjoy participating in is bowling. Sure I enjoy watching football, but knocking down pins, or seeing them remain upright after a particularly good pocket hit, brings more emotion in that moment than just watching sports. Knocking things down instead of building something up brings out something primal. Maybe that’s why the Rampage video game was so much fun. Instead of trying to prevent the destruction of the city, you were tasked to bring down all the buildings. Now instead of demolishing buildings virtually , meeple are the target in the Rampage board game.

The number of components looks a bit daunting at first:

You might think that the oversized Rampage box holds a monster of a game. While it holds a large number of pieces, the box holds more hot air than necessary.

Rampage requires some setup before playing. A few tiles have a sticky backing to attach them to the main board. Then stickers need to be placed on the body, paws, and vehicles. For a limited time meeple stickers are available for the residents, but they really aren’t necessary and can take a long time to place.

Once the components have their respective stickers placed, set up the city by placing a meeple upon each corner of the ruins and a floor tile on top of them. Place the layers until a single meeple is placed on top of each building with the remaining meeple put on a stadium tile in the center of the board. Put the vehicles on the markers on the board and the monsters in each corner. Give each player a monster shield, four teeth tokens, and a card of each type. Once the character and power cards are revealed the carnage begins.

Players have four actions available to them. Moving your monster involves taking the body off and flicking the paw disc on the board. When your monster’s paws are next to a building, you can take the body of your monster, hold it over the building, and drop it onto the building to demolish it. Vehicles in the same neighborhood as you can be tossed by flicking them off the head of your monster. Finally, you can place your chin on the top of your monster and use your own breath to spew out your monster’s radioactive breath. (You may want to make sure that no one is sick or recovering from an illness before starting because of this, and hide this from the guy that seems to have uncontrollable spittle while he talks.) Players must always be seated when you perform an action, but you don’t have to be sitting in your starting spot, ending up in another player’s chair for your turn. The power and secret superpower cards give you other abilities, such as eating more meeple than teeth you have, taking two flicks when performing the move action, tossing a vehicle from any neighborhood, preventing the other monsters from moving during their next turn, moving your monster into any neighborhood, and drawing extra power cards.

You eat the meeple and floors displaced by the actions you took, not supporting any objects above them, and in the same neighborhood as your monster. The number of devoured meeple placed behind your shield in the monster’s “stomach” is determined by the number of teeth you have. Two are permanent, but four can be broken off or stolen from other monsters. meeple no longer touching the board have escaped and are placed on the runaway board. This two-sided board contains penalties for allowing too many escaping meeple. Once the last floor has been eaten or landed outside the city, each player gets one more turn and everyone adds their scores up.

While this sounds like a lot of fun by itself, what makes Rampage a game and not an activity? The meeple come in different colors representing different occupations. For instance, the red meeple represent superheroes (Mighty Morphin’ Power meeple?), green meeple act as soldiers, yellow meeple stand in for blonde cheerleaders, and grey meeple serve as elderly. For each set of colored meeple (one of each color) you gain ten points. Additionally, each floor nets a point, and every tooth gains two. The character cards also contain ways to earn extra points. Choosing which meeple you eat can be difficult depending on which sets you already have and which character you are. However, the scoring feels a bit tacked on.

The randomness of Rampage gives the game replayability. Each location is the same, but the stacks of meeple on each floor will be different every time. The two sides of the runaway board change the punishment you get when meeple run away. Players have different abilities depending on which cards they are dealt. If you don’t like a lot of randomness, then you probably won’t want to play Rampage for the score.

The setup time can take five to ten minutes, considering that the game takes 20 to 45 minutes, depending on how quickly you play. If you know you are going to play it, you may want to take a little time to set it up before everyone else arrives so they don’t have to wait for you to get it put together. Otherwise, you can enlist a few friends to helping set it up.

In the end, Rampage feels less like a game and more like an experience not to be taken seriously. It reminds me a bit of Betrayal at House of the Hill, a game that tells a typical horror B-movie and someone betrays the group halfway through the adventure. The fun comes from telling the story and the players don’t really care who ends up winning or losing. The destruction in Rampage becomes a perverse beauty, cheering for buildings coming down and striving to see the meeple meet their grotesque doom. If your group is into heavy Eurogames that last for hours in complete silence, then you probably won’t bring this to the table too often. However, Rampage could be a great way to unwind at the end of a long day with a bunch of friends and a few adult beverages.