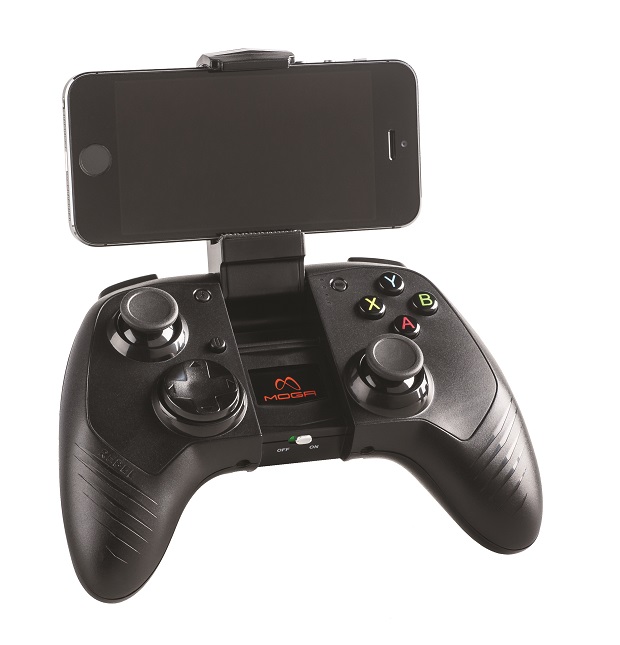 It’s weird to think that mobile devices like phones and tablets are getting their own dedicated gaming controllers. “Why even bother,” you might ask yourself, “when I could just get a 3DS or a Vita?” And while yes, it’s true that a majority of mobile games implement their their own unique control schemes, many developers have brought console-quality experiences to a tablet without dedicated controls, leaving them to flounder on the most popular portable devices on the planet.

The MOGA Rebel aims to fix that problem, and gets most of the way there.

The first thing you notice when you pick up the Rebel is how similar it feels to a typical console controller. You’ve got the four face buttons on the right, two analog sticks, a directional pad, and two different sets of shoulder buttons and triggers. Other than the fact that you can’t click in the thumbsticks, the Rebel looks and feels almost exactly like an Xbox 360 controller, and that immediate familiarity you get makes transitioning to games on the iPad or iPhone almost instantaneous. It is rather large, making it less than ideal as a true portable, but you sacrifice portability for comfort here—and that’s a sacrifice I think is worth making.

Another thing you’ll notice is how light it feels, especially when compared to more conventional controllers. At first it seemed a little cheap—then I flipped open the included iPhone grip located in the middle of the device and attached my phone to it. My phone was now a legitimate handheld gaming device, complete with buttons, and I was playing Leo’s Fortune in no time. Any added weight would have made that a very uncomfortable experience, indeed.

The MOGA Rebel, while incredibly light, still feels very sturdy, and along with the battery, is capable of standing up to hours of play—even if the buttons feel a bit squishy. The analog sticks are somewhat loose and imprecise, and the buttons take a split-second to register on your iPhone or iPad. Most mobile games don’t require such precise command of the controls, so most of the time, it’s not an issue, but there is a noticeable lag from when you press the button and when your action occurs on-screen.

And then there’s the price tag—the MOGA Rebel retails for $79.99. That’s $20 more than a PlayStation 4 controller, $30 more than an Ouya controller, and while the Rebel supports a significant portion of games, it’s a fraction of a fraction of the total number of apps available on the market.

Don’t get me wrong, the Rebel is a solid controller (and probably the only way to make Bioshock actually worth owning on the iPad), but the cost and nature of iOS controllers make them inherently a luxury, and the Rebel is no different. Even with its issues, the MOGA Rebel is one of the best iOS controllers on the market—which probably says more about the market than it does the Rebel.

The MOGA Rebel is a fine iOS controller, but for $80, this thing better be perfect—and it just isn't.