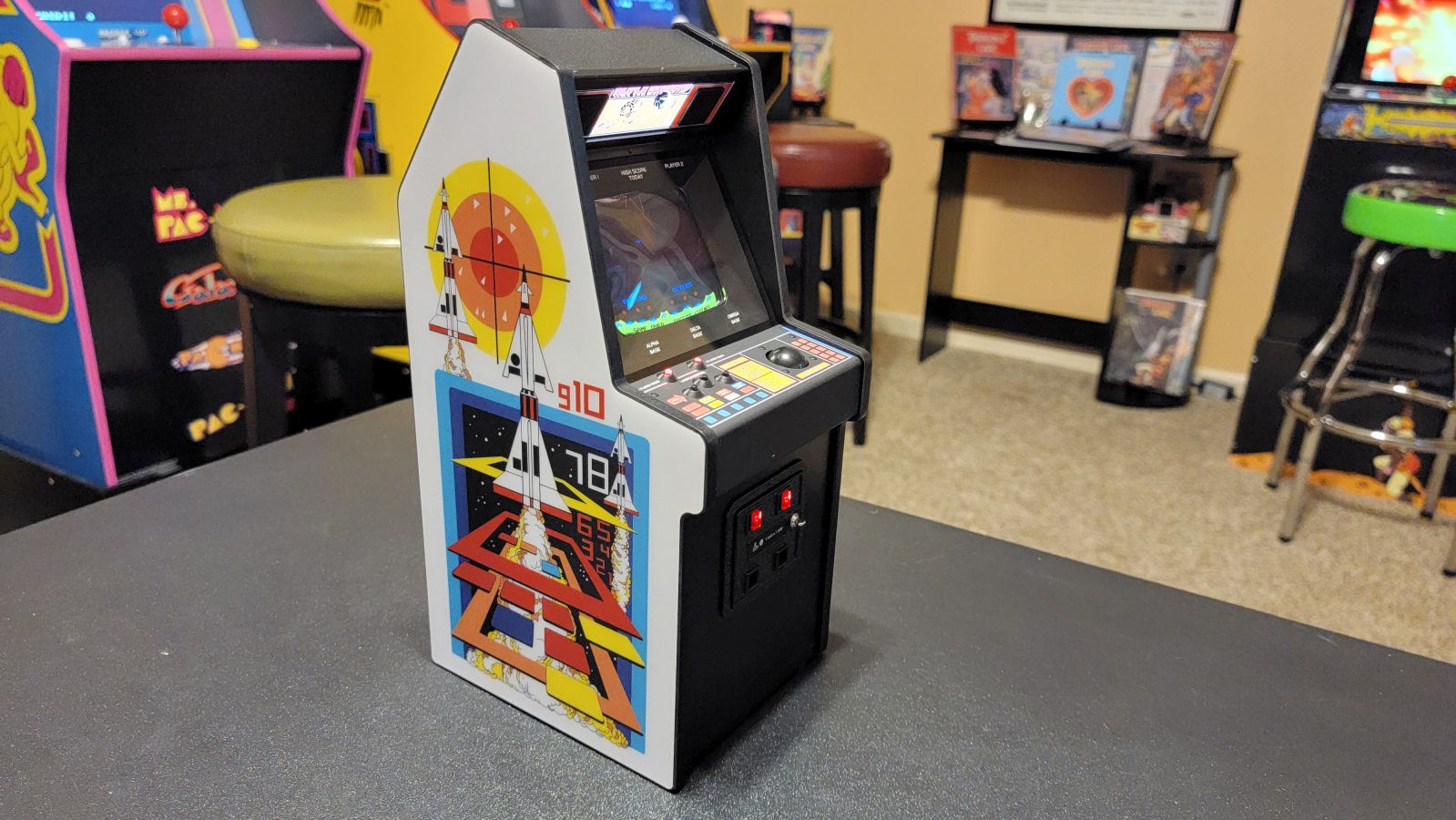 Missile Command, the iconic arcade classic first released in 1980, has seen many iterations throughout the years. From its original arcade release, the fantastic Atari ports (which is where I happened to first play the game), to the modern age, the simple yet supremely addicting gameplay has allowed this classic to endure. Now you can bring home an exact replica of the original arcade, albeit in a much smaller form, thanks to New Wave’s latest replicade release.

If you’ve never played Missile Command, the core gameplay is quite simple, while still providing a steep challenge. Using a trackball to aim and three buttons to fire, players must defend their cities from missile attacks by accurately shooting missiles out of the air. Each shot creates an explosion which lasts for a few seconds, destroying all missiles which pass through it. Each of the three attack buttons fires from a different direction, either the left, center, or right, with each weapon having a limited supply of ammunition.  This setup leads to players having to strategically plan their attacks, as attempting to destroy a missile on the far-right side of the screen with a shot from the left wastes precious seconds and is much harder to accurately time. The goal of the game is to survive as long as possible and rack up a high score, with the game ending once all cities are destroyed. 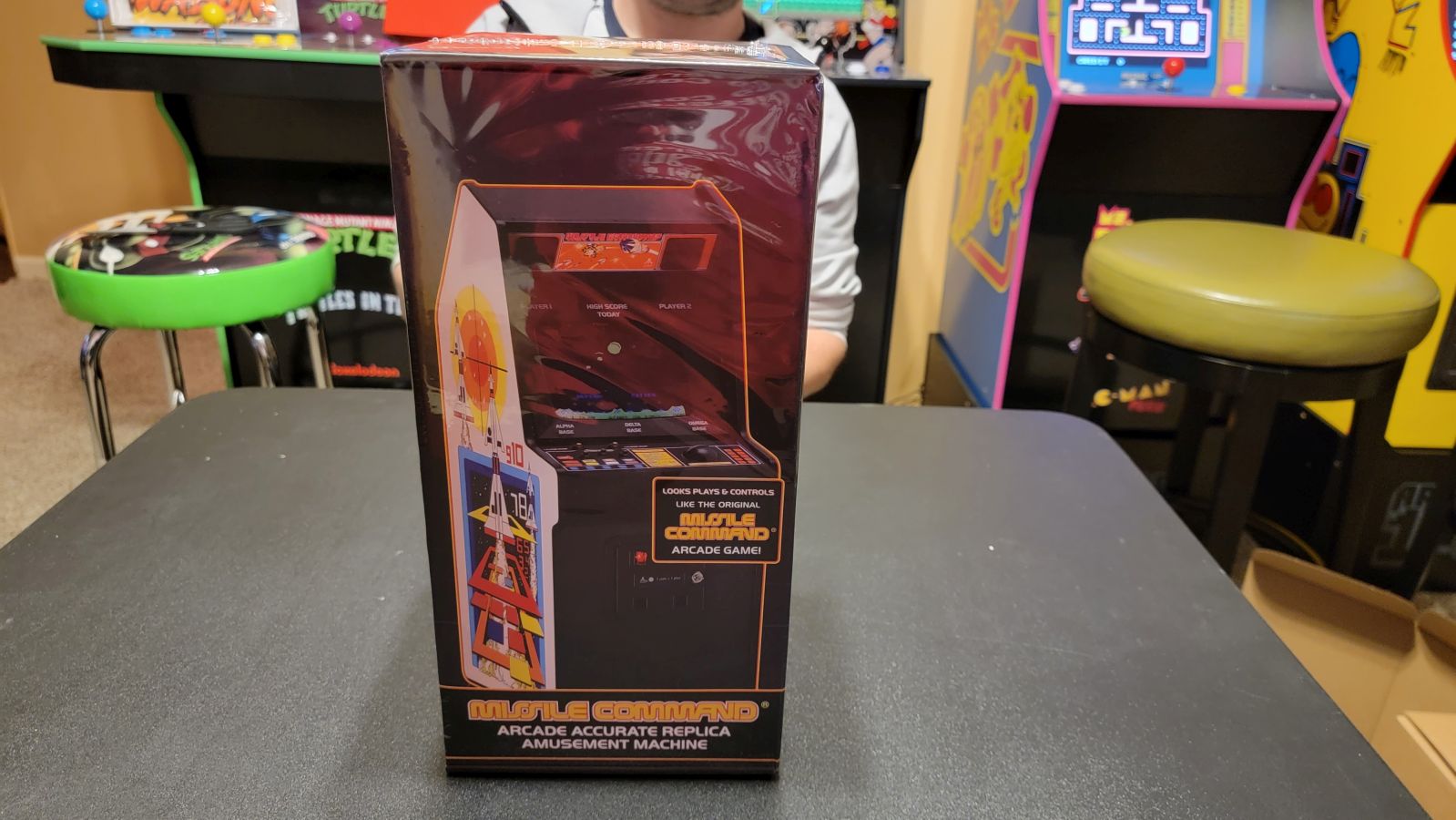 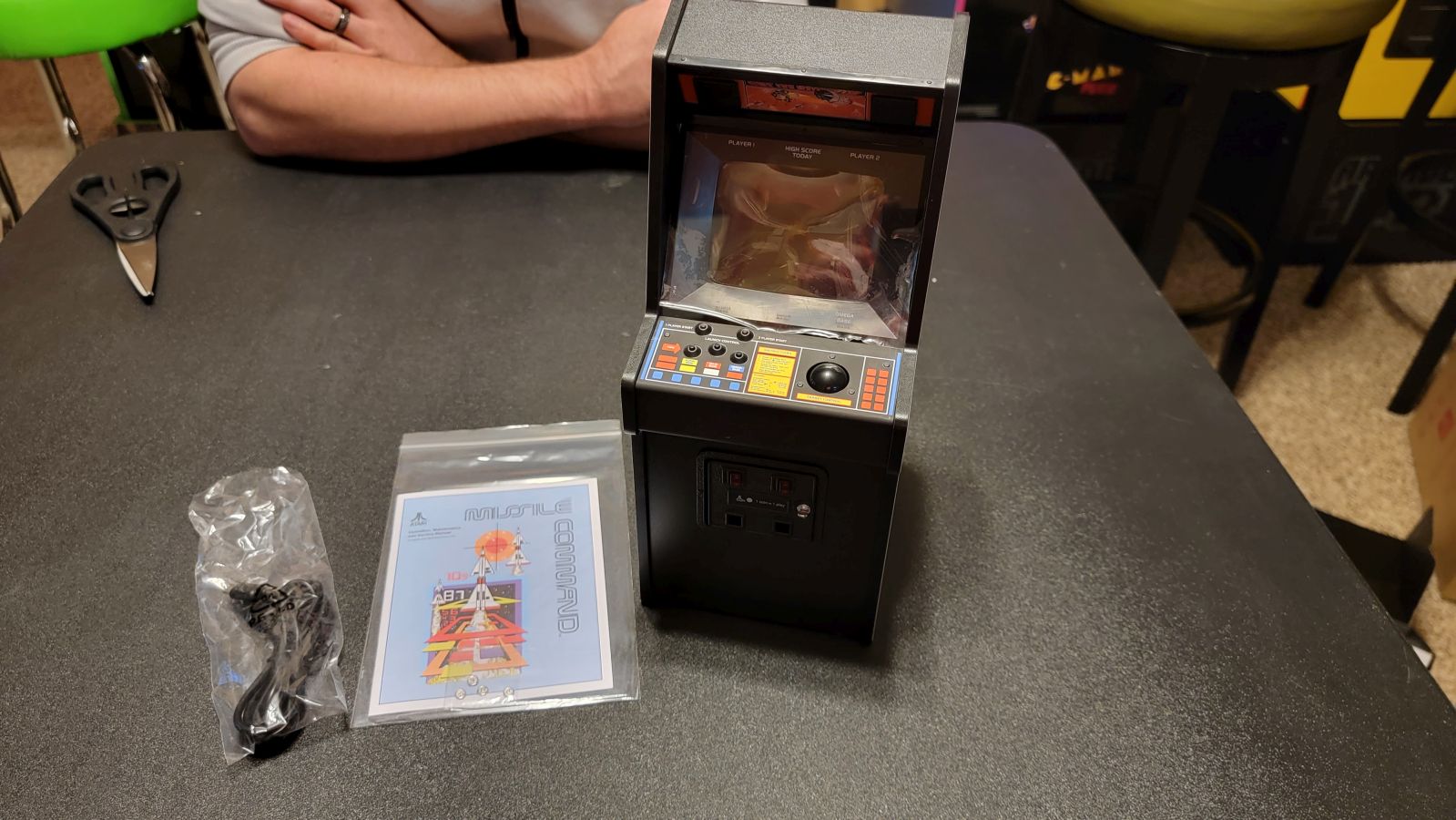 For those unfamiliar with New Wave, they have spent the past couple of years releasing a line of incredibly detailed and professionally made 1/6th scale arcade cabinets which both mimic the original look of the arcades while also being fully playable.  Each arcade is meticulously crafted, sturdy, and able to withstand countless hours of gameplay while also looking good on a shelf. Like New Wave’s previous releases, the Missile Command replicade is aesthetically gorgeous and impeccably built. High quality vinyl artwork overlays, sturdy MDF wood, bright LED lights, diecast metal, a vibrant marquee, crystal clear amplified mono audio, a bright LCD screen, and more combine to form a gorgeous collector’s piece while simultaneously providing a faithful playing experience.

The Missile Command replicade comes tightly packed in a sturdy outer box and a detailed inner box with the unit itself snuggly resting in deep foam. Along with the arcade unit and charging cable comes an instruction manual and four mini arcade tokens, which can’t be used on the machine, but are cool nonetheless. Standing at just 11 5/8” inches tall, Missile Command is small but mighty. Despite the size, the first thing you’ll notice is the heft and sturdiness of the build. Small does not equate to cheap, as the replicade line has shown time and again. New Wave’s quality components help create a piece that effortlessly stands out when compared to cheaper, more plastic based mini arcade options. Of course, the premium materials come at an additional cost (MSRP of $159.99) compared to the cheaper iterations of arcades available, but I’ll leave it up to the individual consumer to decide if the cost is right. Collectors will almost certainly be delighted with the immaculate recreation of this iconic arcade and scramble to have a piece to display.

After you finish admiring the build, you’ll notice the more subtle features, such as the gorgeous deck overlay, accurately molded individual buttons, light up coin door, vibrant marquee, and crystal-clear speaker quality. Both in a lit-up room or in a darkened area for a more arcade accurate experience, the Missile Command replicade boasts a clear picture, easy to use buttons and features, and just looks phenomenal. 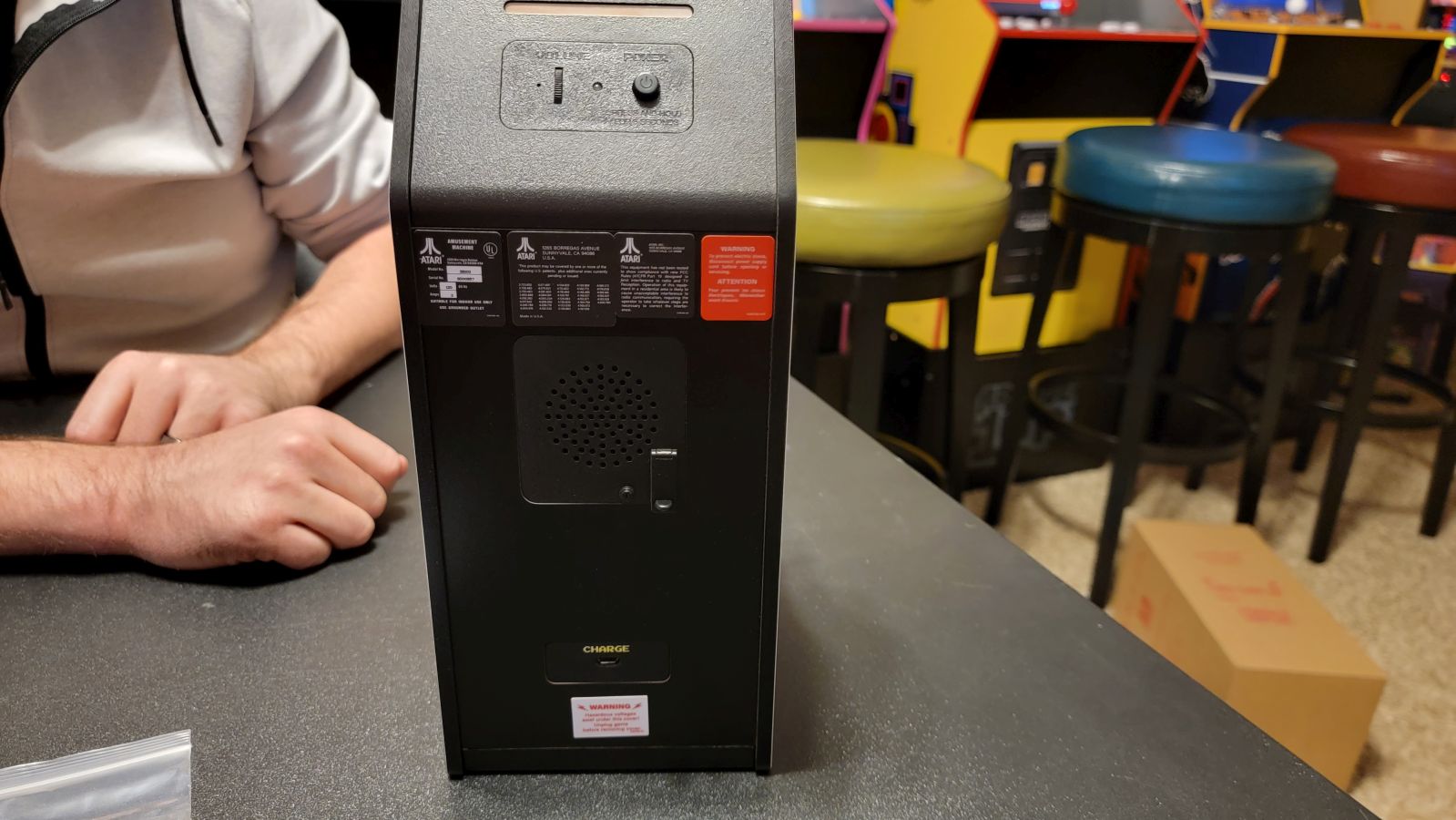 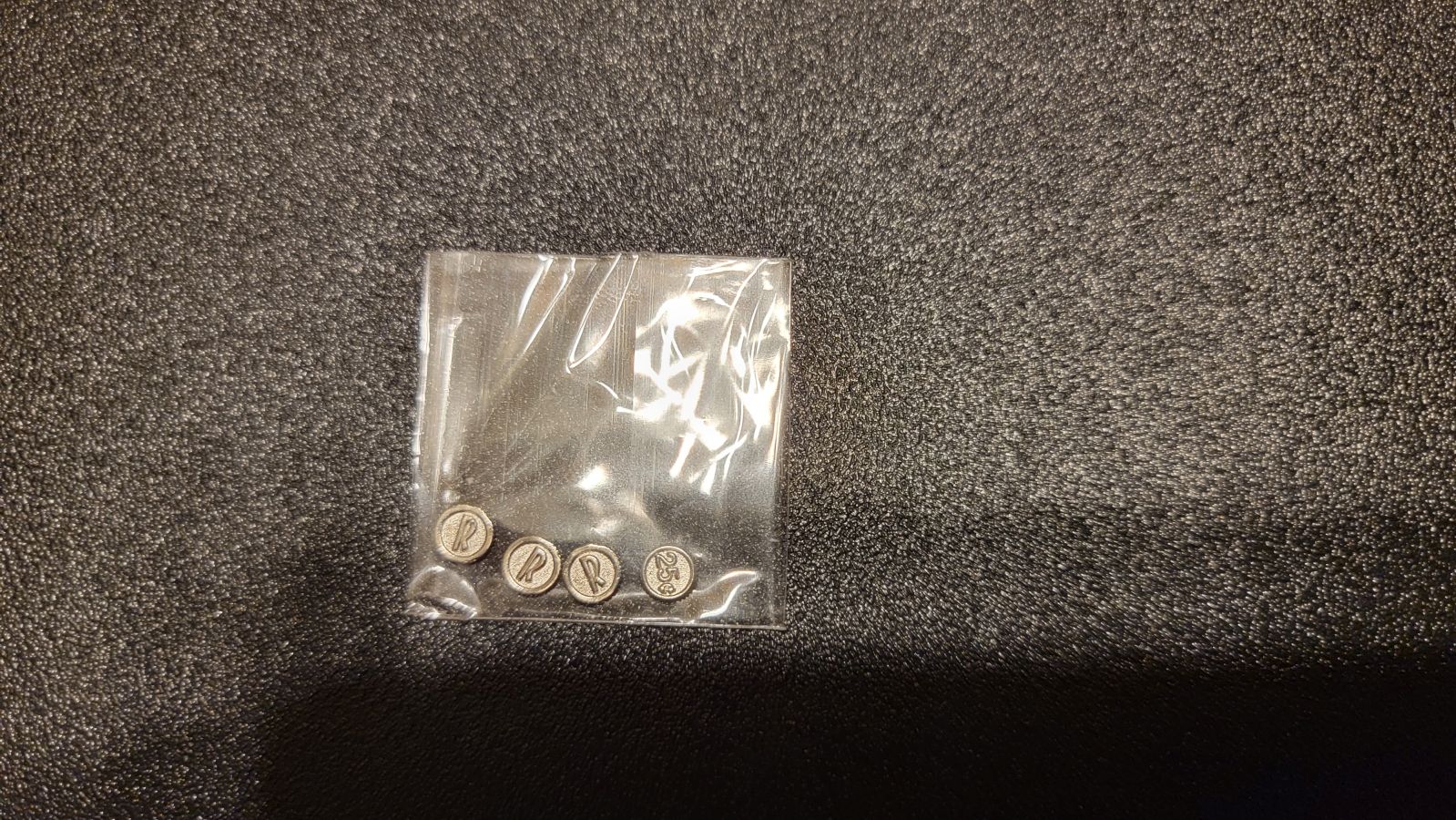 To turn the arcade on, you must press and hold the power button on the back of the unit for a few seconds. Next to the power button is the volume control, which provides a surprisingly large range for such a small product. Near the bottom of the arcade is a Micro USB hook up for the charge cable, as the system contains a built-in rechargeable battery which provides hours of play time on a single charge. On the front of the arcade are two lit up coin deposits, each of which serves a different purpose. The first mimics inserting a coin into the machine, giving you a credit to play, while the second accesses the dip switch settings.

The dip switch settings allow players to adjust the screen brightness, toggle the marquee light on and off, adjust the trackball sensitivity and modes, toggle the attract mode audio, switch up the number of starting cities, determine at what score players will receive a bonus city, and to reset high scores. While I did adjust a few settings while play testing, I found that I was happy with the default settings aside from the trackball sensitivity, which I found a bit too slow at default settings and preferred playing with on high sensitivity.

The control deck features buttons for 1 player and 2 player options, a Trak-Ball XL, and individual buttons for the alpha base, delta base, and omega base. The buttons work flawlessly and, while everything is a bit cramped together due to the size of the unit, were relatively comfortable to play with after a few seconds of adjusting. As previously stated, the trackball felt a bit sluggish to me on the default settings, forcing me to not be able to accurately land shots and to sometimes roll multiple times to get to the area I needed to be at. Admittedly, I could just not be very good at Missile Command, but I don’t remember having this issue in the past on the original arcade machines. Of course, I never expected the quality of a $200 track ball in a unit of this size, and as stated, simply adjusting the sensitivity seemed to clear up most of my issues. Player experience may vary, so it is helpful that there are multiple sensitivity settings as the game relies on precision aiming. 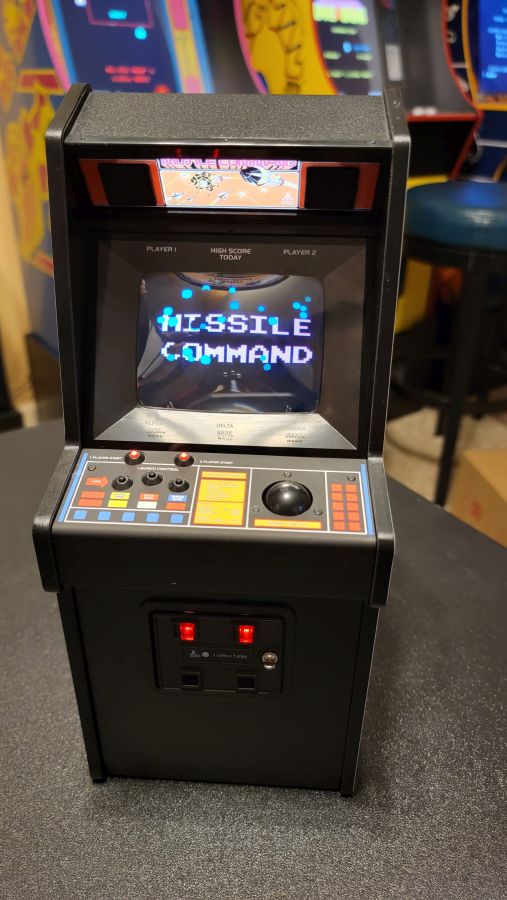 Aside from the sensitivity issue, which was quickly corrected, the gameplay is flawless. I had a blast honing my missile deflecting skills and frantically attempting to best my previous scores. While there isn’t much to the base game, as it is over 30 years old, the ROM is arcade accurate and provides a steep challenge that allows you to slowly up your high score, which leads to that just one more game feeling. High scores are stored on non-volatile memory and allow you to input your initials as bragging rights when friends are over.

I do have one gripe, but I want to preface it by saying that it may not be an issue for others and that it did not affect gameplay. My issue is with the CRT FX convex, a transparent lens placed over the 4:3 LCD screen which is supposed to mimic the look of the original CRT picture. The lens essentially acts as a small magnifying glass and as such makes the screen susceptible to more glare than my other replicade which has only an LCD screen, and slightly warps the screen at the edges. The picture remains vibrant, and the game is easily playable despite these negatives, but I would have personally preferred they do away with the CRT FX convex and just have an LCD screen. Sure, that is not 100% arcade accurate, but there are times when sacrificing a bit of accuracy for a better end user experience may be worthwhile. That said, others may not mind the screen, so your experience may vary. 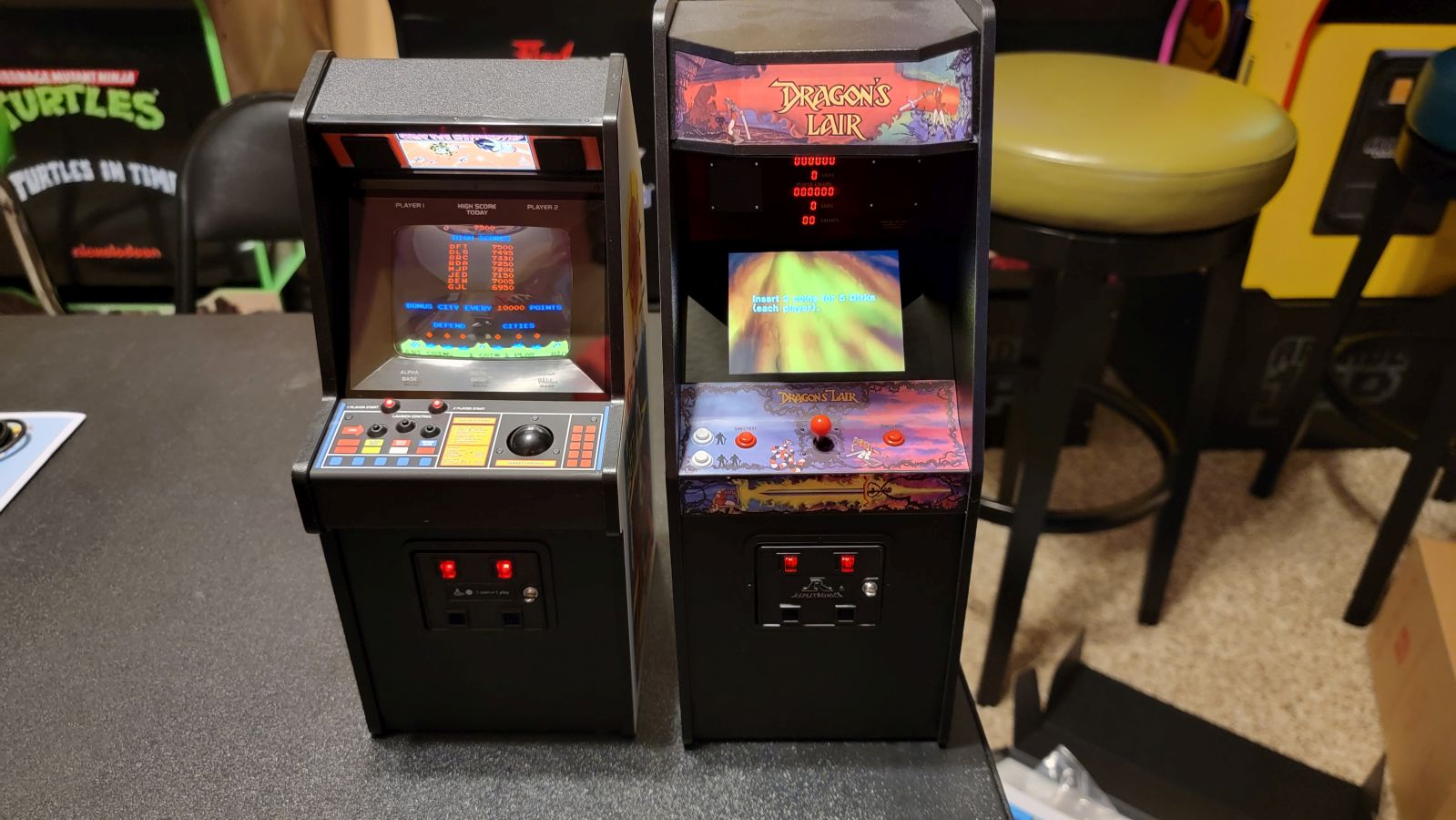 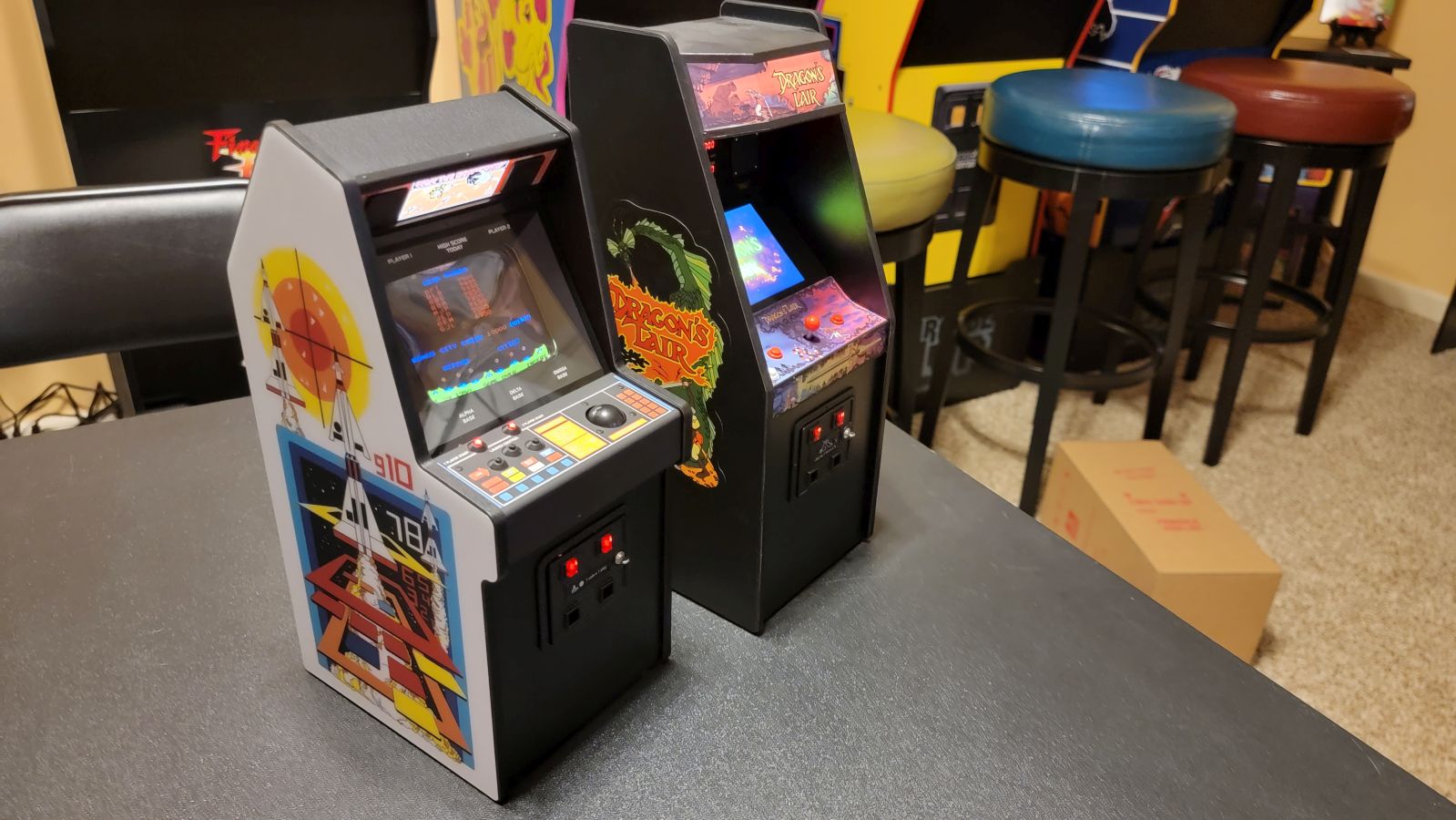 Overall, New Wave Toys replicade is a near perfect replica of the original arcade unit and is a blast to play Missile Command on. After countless playthroughs I still find myself entertained by Missile Command’s fun, challenging, and yes, admittedly repetitive gameplay. Despite first playing the game as a child and in countless iterations since, my love for the title has never faltered and my everlasting quest for a high score ensures that I have many hours of playtime left. Thanks to New Wave Toys, that playtime will be done in style.

The Missile Command replicade retails for $159.99 and provides a lot of bang for the buck, but may find itself filling a more specific video game niche rather than appealing to the average consumer. That’s not a bad thing, as collectible pieces normally are catered to a targeted group who favors quality over cheap pricing. For those looking for a high-quality collectible arcade, that can serve as both a fantastic centerpiece as well as entertain as a fully playable arcade unit, you’ll find a lot to love with this small, but impeccably crafted unit. While there is only one game on the unit and that game itself can be a bit repetitive, it remains consistently fun nonetheless and I am happy to have this unit on my shelf next to my Dragon’s Lair replicade and can’t wait to add more to my collection.

Richard Allen is a freelance writer and contributing editor for various publications. When not writing for Gaming Trend you can find him covering theatre for Broadway World, movies and TV for Fandomize, or working on original stories. An avid retro gamer, he is overly obsessed with Dragon's Lair. Chat with him via @thricetheartist on Twitter and @richardallenwrites on Facebook and Instagram.
Related Articles: Missile Command
Share
Tweet
Share
Submit