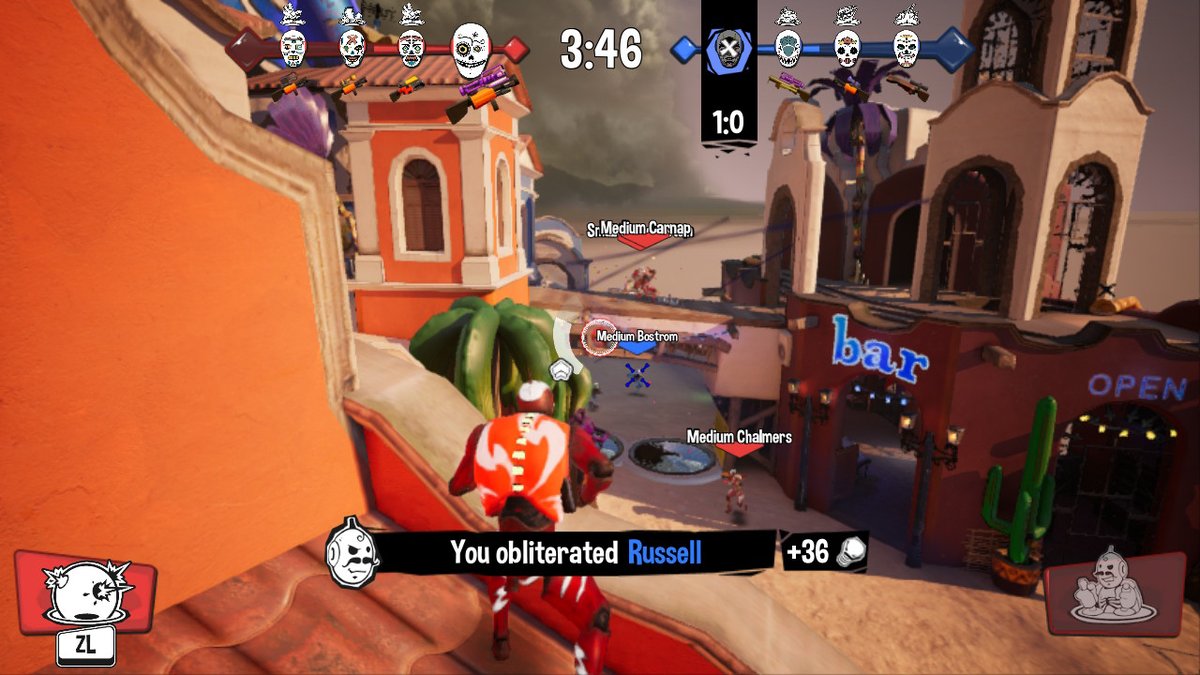 Morphies Law is a game that fostered quite a bit of buzz when it was announced last Fall, a sentiment that steadily built through the preceding months ahead of its stealth-release last week. I, for one, was incredibly excited to check this title out, and so was a good portion of the Nintendo community. Unfortunately, the more I play of Morphies Law, the more disappointed in the game I become. While the game’s core idea is solid, the execution is incredibly amateurish, saddled by a host of design and technical problems that diminish Morphies Law’s appeal in its near entirety.

At the heart of Morphies Law is the idea of shooting your opponent to steal their mass. For instance, say that you hammer round after round into your opponent’s head. Their head will lose mass, and yours will gain it. If you’re dominating in a match, you’ll become a bigger, slower target, but if you’re losing, you’ll be harder to hit, and you’ll have access to secret passages inaccessible to your larger foes. In concept, this is a very innovative spin on the team-based shooter, as dynamically gaining and losing mass opens up different possibilities in each match. You could even lean into the teamwork aspect of the mass mechanic, shooting teammates to steal their mass, delegating it to various players to allow for careful traversal around the map. The tactical possibilities of this mechanic are huge—in concept, that is.

In execution, all of Morphies Law’s gunfights devolve into mindless spam-fests where the winner is the player who could dish out more damage. Morphies Law doesn’t have any way to aim down sights, nor does it even have a reload mechanic, so taking your finger off of the trigger is never the right thing to do. The best strategy is to either plant your feet, shoot healing goo on the ground, and then pepper round after round into your opponent, or to weave around the map like a maniac shooting anything and everything that comes into range. There is simply no skill to these shoot-outs at all. Considering there is no precision in aiming and that success in combat comes from just laying down more fire than the opponent, the mass mechanic is nearly non-existent in multiplayer. There is just no room to carefully gain or lose mass to traverse new areas when everyone is mindlessly spraying down the opposition, on top of the fact that shooting just isn’t precise at all.

The lack of shooting mechanics didn’t necessarily have to be to Morphies Law’s deficit though, as one of my favorite shooters, Splatoon, relies very little on actual aim. The crux of Splatoon’s gunfights is your movement skill. Dipping in and out of ink, dropping down on opponents, sneaking around their backs, and more is how you best another Inkling in combat. Unfortunately, Morphies Law has rather bad movement. Basic tools like the ability to crouch or roll aren’t in the game, and there isn’t even a sprint toggle. There are some more inventive movement options like a jetpack and grappling hook, but both are incredibly janky and hard to use. These seem like pre-alpha mechanics– a far cry from how a game should feel at release.

The modes, while superior to the mechanics, still aren’t up to snuff. Morph Match and Head Hunt are incredibly basic deathmatch and one-flag, capture the flag modes, respectively. Head Hunt isn’t without its flaws though, as matches often end incredibly quickly. The maps are so small and you only have to score one point to win, and so many matches are over before they’ve really begun. It just doesn’t feel as though these maps were designed for this mode. However, the most interesting, yet still poorly designed, mode is Mass Heist.

In Mass Heist, you have to hit switches scattered around the map to lower the shield of your opponents’ avatar, steal its mass, and bank that mass as points at an altar. This idea really plays up Morphies Law’s core concept. Perhaps you get a bit greedy, steal a bunch of mass, and then fight your way to the altar. This works, but the more mass you have, the slower you become. Or, maybe you grab only a bit of mass and dash back to the altar, thus playing more conservatively. It is a really interesting risk-vs-reward system. Or, well, it would be, but, just like everything else in the game, interesting ideas aren’t matched by great design.

The altar constantly moves around, forcing players to stay on their toes. You would think this centralizes combat, as everyone has to converge on an always moving point, but it really doesn’t. The issue is that while only one altar opens up, several buttons open up all over the map. Depositing the mass is instantaneous– dropping the shields at a button and gathering the mass isn’t. So, the actual time-consuming part of the mode, the one that would require actual attack and defense, is so decentralized that barely any combat occurs. Everyone scatters over the map, so no one really skirmishes. It just feels like a poor choice.

The maps are a mixed bag as well. I’ll go over all of them, as there are only four. On the whole, they have interesting theming and concepts, but don’t all succeed. Morphie Saloon and Tanker Town are the best, with interesting mechanics of shifting buildings and oils slicks respectively, and no real downsides. Fan Antonio, a great urban map with actual verticality, has fans that’ll propel you upward. The only issue is that above the fans are insta-kill spikes, so stepping onto them is an instant death. Even the AI will wander into these traps, leading me to wonder why they were even included. However, the worst map is easily Maztec Temple, which features a central, spinning design which leads to a host of clipping and movement issues, as the map jerkily twists itself around and around. All of the maps share one vital flaw though; they have two, fixed spawn points, one per team. The issue is that the other team can waltz right in, resulting in rampant spawn-killing. Mistakes like this just feel amateurish.

That segues nicely into Morphies Law’s absurd technical issues. I’m not sure if calling this game’s frame rate and netcode consistent is the right term– because it is consistent, but consistently bad. Character animations in particular stutter and jump around like no one’s business, and forget about using the jetpack online, as you’ll jerkily cut through the air instead of being shot smoothly ahead. I also had many instances of rubberbanding, which was very disappointing. The lobby system is very poor also with matches more often than not unable to even fill all eight spots. Morphies Law doesn’t backfill with bots either, so if only six people join, you’re playing four versus two. Sorry. Squading up with a friend works rather well, but seems to really confuse the lobby. When I tested this feature, my friend and I simply couldn’t find a match anywhere near full, and had to resort to playing against bots together.

With all of that said, the game does understand that it is on the Switch, which is really nice. Many Switch titles seemingly neglect the hybrid’s features, which Morphies Law thankfully doesn’t do. For starters, the game has a robust offline mode in which you can play multiplayer matches against bots with a host of modifiers, and these matches even give experience points, meaning that you can always progress forward in Morphies Law even when you can’t get online. The game also has touch inputs on the menus, a feature I feel should be standard on the Switch, and gyro control akin to Splatoon 2. In these respects, Morphies Law really does a good job tailoring the experience to the console. That extends to multiplayer too, as matches are mere minutes long, allowing you to tailor your experience to each play session. You can hop in for a few minutes, or a few hours.

However, Morphies Law’s strongest point is its progression and customization. Aesthetically, you can fully customize every aspect of your Morphie, or use pre-made parts. It is incredibly nuanced, and allows for true personalization. The weapon customization is even stronger though. As you level up, you’ll gain new weapon parts that can be combined in myriad ways to make truly unique creations. When you combine that with unlockable special abilities, you can really specialize your Morphie for your playstyle. It is just a shame that the gameplay doesn’t reach the same standard.

Morphies Law is a game I’d check in on six months from now, and see if the developers have patched out any of the game’s issues and radically overhauled the mechanics. It’s a shame really; the game has such a strong concept and aesthetic. It is just smothered by amateurish design decisions, unskilled gunplay, and technical bugs. The game just feels supremely unfinished. I really hope it isn’t dead on arrival, as it has potential to one day be something special, but right now, Morphies Law is a failure.

Saddled by amateurish design, unskilled gunplay, and technical issues, Morphies Law fails as an online shooter. The game does have a great core concept and aesthetic, but it just falls short at every step. Not even its robust offline mode and customization system can prop up a shooter too flawed to receive even a feeble recommendation.

Abram is an aspiring games journalist with a soft-spot for titles published by a particular company that starts with N, and ends with -intendo. When he's not playing, or writing about, video games, Abram is most likely ranting to no one in particular about various films he's seen, or grabbing the sketchpad to do a bit of drawing.
Related Articles: Morphies Law
Share
Tweet
Share
Submit