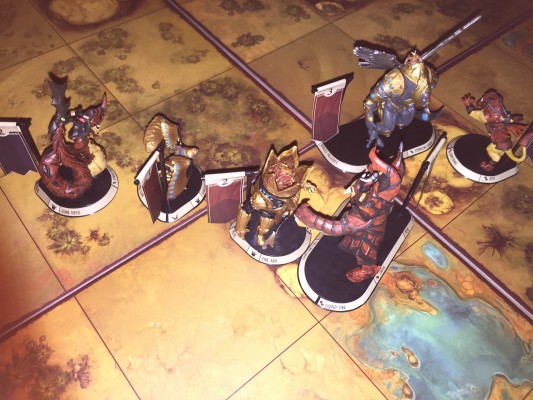 Playing miniatures games can be intimidating with rules about movement, how far attacks reach, and the number of actions available on a turn. Sometimes the housekeeping is just as time consuming as the decision making. While apps have been created to assist with these, we are starting to see apps integrated into games. The first game that has embraced this model is Golem Arcana.

Golem Arcana released with a starter set of six figures as well as a couple of expansions with other figures. The starter set contains three figures from two different factions. The figures have four different classes representing their general size and power. The starter set contains two Titans and four Ogres, the second largest and third largest of the classes. These are definitely good enough to get you started, but eventually you’ll want some expansions if you play this regularly with friends. Along with these figures, several three by three map tiles are included.

Setting up a scenario requires downloading the app and starting it. The main screen contains buttons to play the game, manage the stylus, and build armies. After a scenario has been selected, the screen shows which tiles are required as well as their orientation. The figure placement is displayed on the screen in some scenarios, while others have a deployment zone. Winning conditions are also given, whether victory points or eliminating the opposing army. Once completed, you are ready for battle.

At first glance Golem Arcana plays like most other grid-based miniature games. Each turn players are allocated a certain number of action points, with the number given dependent on the size of the armies on both sides. Movement costs differently depending on the terrain. Spaces with obstructions or elevated terrain cost more to traverse through than plains or shallow water, although flying creatures don’t deal with terrain types when calculating their action point cost. Each square can handle up to four base sizes, and the figures are scaled appropriately so that you can’t fit more figures in a square than what it can handle.

Figuring an attack chance takes some math. By using an attack’s accuracy then subtracting the defender’s dodge rating and terrain cover bonus results in a percentage. To successfully hit the target, the combat result needs to be less than this number. The result can be generated either by rolling the two included ten-sided dice or by the app. A successful attack causes a loss in hit points equal to the attack’s damage minus the target’s armor. Critical and lucky hits come from rolling doubles. Ranged and melee attacks have different statistics, resulting in a different hit percentage and damage.

Sometimes miniature games restrict what figures can do by saying they can either move and perform an action or move twice. Golem Arcana doesn’t restrict what can be done this way as long as enough action points are available. After performing an action that ability gains cooldown pips, one for a movement and two for attacks. Once an ability has cooldown pips, the action points required to perform that movement doubles. At the beginning of each turn, a cooldown pip is cleared from every ability for that player.

So you might wonder how the app knows where the figures are and what moves they are performing. The base game includes a stylus that reads microdots. Microdots are printed over all the map tiles, bases of the figures, and on the cards. Areas representing the abilities of figures wrap around the base. Moving is performed by touching the movement area on base of the figure with the stylus, then tapping the square to move into. The app highlights which squares the figure can move into. By using the stylus on an attack area, the app shows which figures can be attacked if the player has enough action points to do so. While it feels a bit awkward at first, the usage of the stylus becomes second nature quickly.

The app helps Golem Arcana in several ways. First, it makes the game easy to teach. It shows you where the figures are and what abilities can be used. I found that it encouraged exploration each turn, touching the base of each figure just to see if something else could be done that turn. Since the app is the referee, you don’t have to worry about rules challenges or look constantly through the rulebook for clarifications.

The Golems each have controllers called Knights. These Knights aren’t represented by figures, although you could say that they are inside the Golem. Instead the app keeps track of them. Knights have abilities that can require action points, although some require mana. Mana wells appear on the board, and while a token placed on the board represents the wells, the app instructs the placement of them. Mana can also be used for powers of Ancient Ones and Relics. The app can also throw in some surprises throughout the game.

The app streamlines the fiddliness of the miniatures. Instead of needing a card with tokens for each ability, the app takes care of this. Calculating the hit percentage is done within the app with no disagreements for environmental cover. The app takes care of all the upkeep at the beginning of the turn, helping turns go faster.

A few issues hinder Golem Arcana. First, I really recommend playing Golem Arcana with a tablet. While it will work on a phone, the screen is smaller and a big screen makes it easier for everyone to see what is going on. I also had a problem where I got a text on my phone and went to reply to it. When I returned to the app, it reset at the beginning and all the progress of the game was lost. I know that the developers are working on a save game feature, but players should be aware of this issue and make sure that you have some uninterrupted time.

The figures themselves look incredible and bring the game to life. The six beautifully painted figures included in the base game are rather large compared to other miniatures. I do wish that the base set included more figures, because it’s difficult to create many armies with just the base set. With that being said, the included figures are a lot of fun to play with, and the value of the base set is good considering the technology used for the game. Adding more figures can get expensive quickly though.

The terrain types are difficult to distinguish sometimes. I didn’t realize that a square contained a plateau until I noticed that the app wouldn’t let me move there. I looked much closely at the board and then noticed the graphic for the elevated terrain. While I can now tell the different terrain types from each other, a small marker to indicate the terrain type would be helpful.
Since all of the surfaces are covered with microdots, I do wonder how the tiles and figure bases will hold up if they get scratched or faded. I am assuming that enough microdots are on each surface that it shouldn’t be difficult to find microdots that work on each area.

The included rulebook lacks detail for actually playing the game. It does a great job explaining the world of Golem Arcana and the history behind it, but actual mechanics behind the game don’t show up. While I believe that they want the players to use the tutorial missions in the app to learn the game, some of the concepts like cooldown would have been nice to see in there. The Golem Arcana website has a more thorough explanation of the rules.

While Golem Arcana could have been played without the app, the inclusion of it enhances the game that really helps reduce downtime. It contains a considerable amount of strategy, and if someone I know was interested in miniature gaming, I wouldn’t hesitate to introduce him to the genre using this game. If you’ve been interested in the genre but afraid of all the counters and extraneous rules, then check out Golem Arcana.

While not working as a Database Administrator, Keith Schleicher has been associated with Gaming Trend since 2003. While his love of video games started with the Telestar Alpha (a pong console with four different games), he trule started playing video games when he received the ill-fated TI-99/4A. While the Speech Synthesizer seemed to be the height of gaming, eventually a 286 AT computer running at 8/12 Hz and a CGA monitor would be his outlet for a while. Eventually he’d graduate to 386, 486, Pentium, and Athlon systems, building some of those systems while doing some hardware reviews and attending Comdex. With the release of the Dreamcast that started his conversion to the console world. Since then he has acquired an NES, SNES, PS2, PS3, PSP, GBA-SP, DS, Xbox, Xbox 360, Xbox One S, Gamecube, Wii, Switch, and Oculus Quest 2. While not playing video games he enjoys bowling, reading, playing board games, listening to music, and watching movies and TV. He originally hails from Wisconsin but is now living in Michigan with his wife and sons.
Related Articles: Golem Arcana, Tabletop
Share
Tweet
Share
Submit