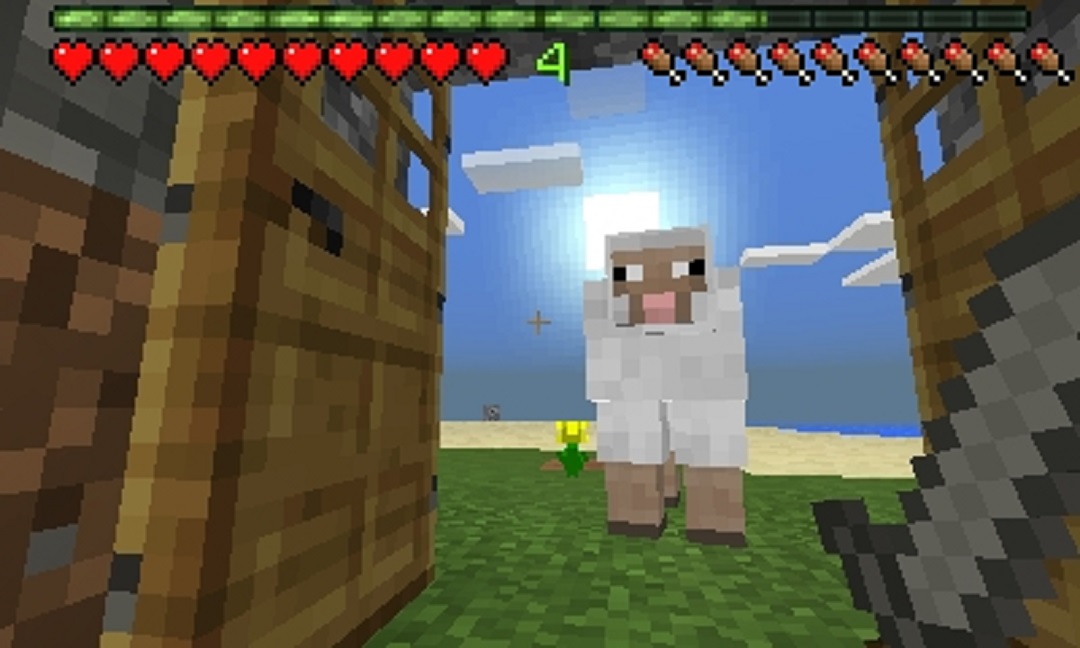 Opening the doors to a beautiful pocket world of sun, blocks, and sheep.

Minecraft is one step closer to complete world domination. One day, we may even see the procedural block-destroying/block-building game on the Atari 2600! Okay, maybe not that far back, but it has come to the New Nintendo 3DS (unfortunately, owners of original 3DS models are unable to play this version) and it is surprisingly competent.

I managed to find a single diamond very early in. I was so proud.

For anyone living under a block, Minecraft is a procedurally generated game that focuses on your creativity. There are two modes that come in a standard version of the game: survival and creative. In survival, you have a health meter and a hunger meter. You start out with nothing during the day phase and have to punch trees, dirt and rocks to build materials to build your home and survive the night or risk losing everything you found. Part of the fun is seeing what sort of awesome fortresses you can build with such simple blocks and limitations.

A small taste of the inventory in creative mode.

Creative mode is all about taking these limitations and throwing them in the garbage. You have access to all of the blocks and can build anything to your heart’s desire (that Minecraft will allow, of course). You don’t have to worry about health, hunger, or enemies. Unless, of course, you trigger a Creeper to blow up part of your house made of stone, wool, blood, sweat, and tears.

Minecraft on the New 3DS, ported by Other Ocean Interactive, is surprisingly well made for the limitations provided. The game runs smoothly with hardly any noticeable lag, and the touch screen adds a useful feature that the WiiU version should have had from the beginning: a map and a touch screen inventory. Having a map on the bottom screen at all times allowed me to plan out my base better, allowing me to dig until I found a new patch of land, and even remember where my base was in relation to the spawn when a Skeleton gave me the wonderful gift of arrows to the face.
Being able to organize my touch screen via inventory also streamlined things as well. Instead of having to select the slots with the circle pad or d-pad (which I could still use if I wanted to), I can touch the objects to move them around. This game also takes advantage of the New 3DS’s extra buttons in a great way. Using ZL and ZR, I can quickly scroll through which item in the hot-bar to select, just like a normal console version.

Having this map open at all times is helpful.

And since it’s a first-person view game, this game requires the c-stick to the upper-right portion of the screen. At first, using it to look around feels odd, but as I found myself getting used to it, it felt naturally to move the camera like I was using two standard control sticks.

Somehow I found the one patch of dirt on this island.

This version of the game is not without its faults, of course. Since it’s on the New Nintendo 3DS, it’s severely limited in content compared to the console editions due to hardware specifications. The closest this game can be compared to is Pocket Edition Alpha 0.15.4, which was released last year for mobile devices. This means that the game does not include The End, but it does have a few more tweaks. There also isn’t any multiplayer available at launch, but the team is planning on including local multiplayer in a future update.

Another surprise is that the 3DS version of the game has a world size bigger than the WiiU version with the largest being 2016×2016, while WiiU’s largest was 864×864. That being said, the draw distance in the 3DS version is terrible.

That’s not very far at all, he could have friends, for all I know.

One final issue I have with the game is its pricing. Like the WiiU and Switch version of the game, Minecraft: New 3DS Edition is $29.99 as opposed to the standard $19.99 because it is bundled with three texture packs and six skins for your character. There doesn’t appear to be a way to purchase more DLC, but I wasn’t interested in these packs in the first place and would have preferred to opt out of having to purchase them with the base game. And unlike Xbox One and Nintendo Switch, Minecraft on the New 3DS won’t be Better Together.

Hooray for something being bundled without an option!

Minecraft: New 3DS Edition is a surprisingly competent version of the game despite its obvious limitations. However, the draw distances are terrible, multiplayer isn’t available at the beginning, and it won’t stack up to the console versions. If you truly want Minecraft on the go and own a Nintendo Switch, I suggest buying that version instead as it is the same price and, unlike the New Nintendo 3DS Edition, it will be receiving the Better Together Update this Winter.

Sean Anthony likes to combine two of his passions: gaming and writing. Gaming has been a huge part of his life ever since he played his first game as a child, Kirby's Adventure. He aspires to have his name attached to an article that makes the whole world go, "Huh, that's neat, I guess."
Related Articles: Minecraft: New Nintendo 3DS Edition
Share
Tweet
Share
Submit