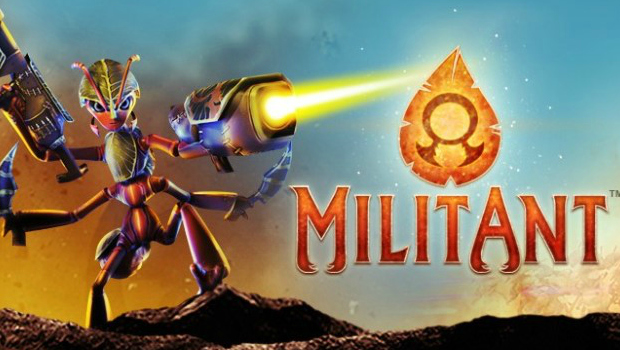 MilitAnt’s eight levels follow the tried-and-true format of most any notable platformer from the pre-3D era; traverse platforming obstacles as you fight your way through assorted enemy types, then slay whatever overlarge insect awaits you at each level’s boss fight. You play a highly skilled ant commando armed with combat knives and an assortment of firearms from machine guns to crossbows. Combat mainly consists of either shooting down your enemies from afar or speed-dashing into groups of insect baddies and mashing the melee button. Unfortunately, I found most of the combat systems so awkward that I became more inclined to avoid it at all costs. The aiming and lock-on mechanics feel finicky and imprecise, which make interacting with enemies in the background and foreground of the 2.5-D space frustrating. Melee combat is much simpler but less effective, as you’re rooted to the spot and unable to deflect the constant barrage of enemy fire.

“Constant barrage” is putting it lightly. Enemy termites, wasps, and beetles incessantly bombard you with projectile attacks from every corner of the screen. Worst of all are the termites, which would spawn directly in front of me as I walked, awkwardly stopping me in my tracks. Once I took care of the pesky pests, they would almost instantaneously be replaced with new termite baddies for me to bump into. So obstructive and unremitting were my enemies, I found I was better off pushing through the swarms by jumping over and dashing past them until I reached the next checkpoint. In fact, considering how gruelingly difficult it was to face enemies head-on, I was shocked by how easy they were to evade.

The boss battles at the end of each level seem to be a bit more thought out than the rest of MilitAnt’s systems. I appreciated a few clever boss mechanics, and the character design is at its best here. But most of these encounters were either annoyingly easy or unconscionably difficult. Several bosses were very easy to manipulate, often in ways that felt like oversights on the developer’s end. Others were almost unfairly difficult, especially considering their placement; one of the most difficult bosses, for example, appears in the second level of the game. After countless attempts at diminishing the giant wasp’s seemingly endless supply of HP, I finally felled the beast, only to find that it was merely a mini-boss. Ironically, the main boss of this level (a gargantuan caterpillar) was one of the easiest in the game. Finally, the bosses become all but impossible three-quarters of the way through the game, where a pair of Praying Mantises put my playthrough of MilitAnt to a halt. At the time of this review’s publication, I have yet to beat the Mantises and don’t think I ever will.

Though its enemies and bosses are an uninspired mess, MilitAnt’s level design clearly shows Xibalba Studios’ retro gaming influences. Most tropes characteristic of old Nintendo platformers like Super Mario Bros. and Mega Man make some well-executed appearances. Platforming controls reasonably well; quick double jumps coupled with horizontal dashes allow for moderately precise platforming and swift traversal. But some obtuse choices in level design and the consistently awful enemy placement keep you from appreciating your agility. It’s so disappointing to see the more inspired challenges go to waste, but it’s a bit unfair to demand precision when the constant barrage of enemy fire and unpredictable spawns makes fluent platforming an impossibility. And while there are those aforementioned platforming sequences reminiscent of masterclass NES titles, there are just as many segments where the ground will inexplicably crumble beneath me, leading to a most unjust and unpredictable fall to my demise.

There is very little fun to be had in MilitAnt. After spending most of my time breezing through half of the game’s bosses, all but submitting to the other half (with a pair of very green exceptions), and rushing past nearly every basic enemy, I get the impression that this ubiquitous imbalance in difficulty is more likely a vast oversight than a design choice. I appreciate Xibalba Studios’ focus on old-school level design, and some of the boss designs showed real inspiration, both in gameplay and aesthetics. But the desultory approach to enemy design and combat mechanics completely overshadows any of MilitAnt’s potentially redeeming qualities.

Joe's favorite games are Zelda: Majora's Mask, Dishonored, Super Mario Bros. 3 and Hearthstone. His favorite game is not The Witcher 3 because he hasn't played it yet.
Related Articles: MilitAnt
Share
Tweet
Share
Submit