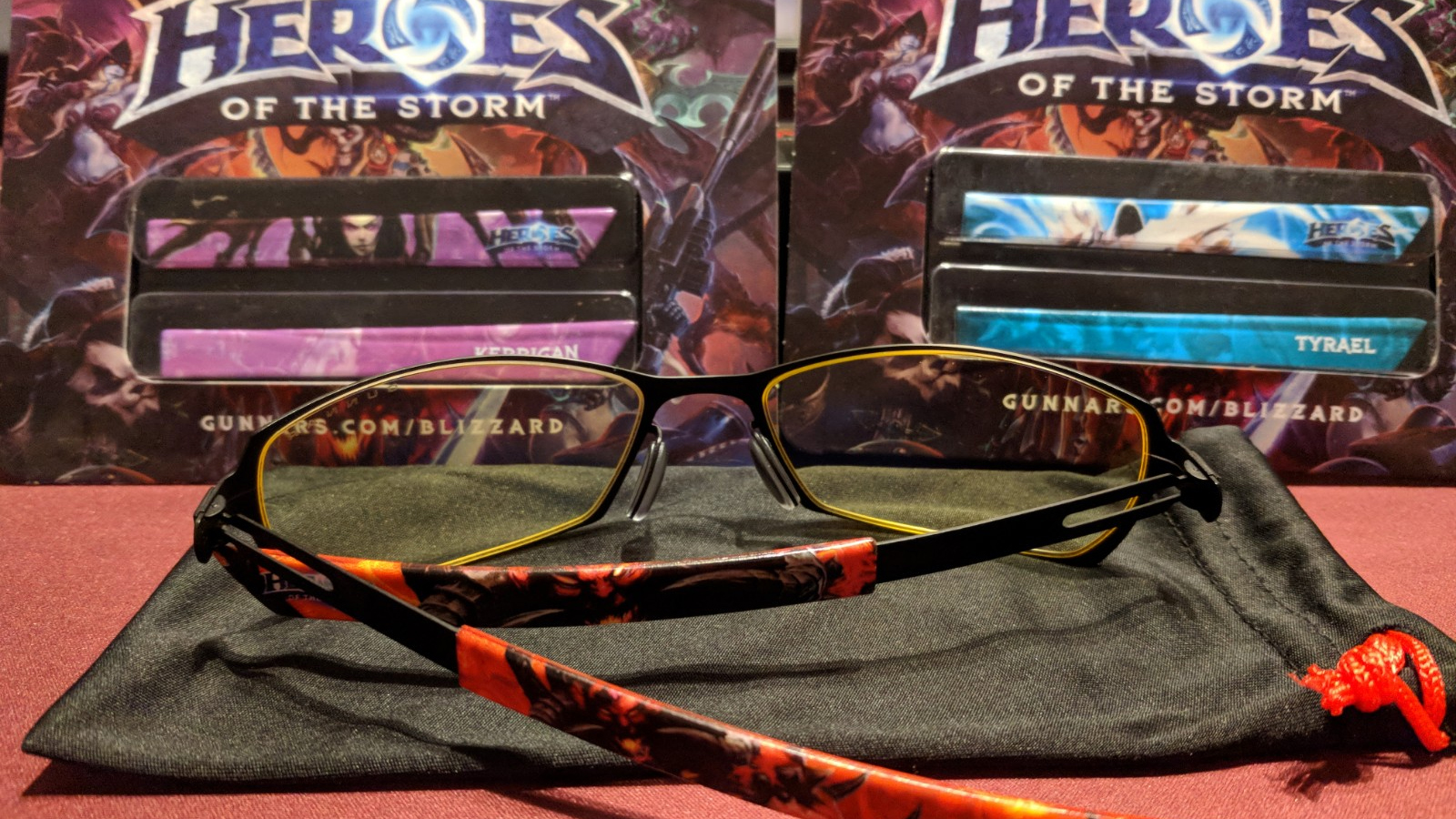 I’ve been a Gunnar devotee since I first laid eyes on them in 2014. As I said in my review at that time, their lightweight frames and blue light-blocking technologies made my eyes feel better after long gaming sessions. The only real hitch was that the prices were a little high. Fast forward to the holiday season of 2017 and we thought we might take a quick look at Gunnar’s new Gaming line and see if they could deliver the same excellent results at a price less than the cost of a new game.

As I unpacked the Gunnar Optik lenses I was again shocked at just how light they are, but a quick stop at my small scale showed that this pair weighs in at 0.8oz — the same amount as its more expensive brother from 2014. For comparison, my cheap plastic shooting glasses are 1.8 oz. Inside the box is a black Gunnar-branded black bag that doubles as a cleaning surface, complete with fashionable red drawstrings.

After my review a few years ago, I started really looking into the questions I couldn’t answer at that time. I knew that the Gunnars helped with my migraines, but I didn’t understand why. The engineer in me demanded that I dig in and not simply accept it at face value. Learning a great deal about blue light and its effect on the human body beyond simple eye strain was, to use the cliche, eye opening.

HEV blue light, at the 450nm wavelength, is rough on the recipient in several ways. Unfortunately, the sources of this are literally everywhere. TVs, computers, laptops, tablets, smart phones, fluorescent and LED lighting, and even the sun drive blue light of varying wavelengths towards our eyes, and sustained prolonged exposure can cause headaches, eye strain, fatigue, and worse. To put it in perspective, at specific wavelengths, blue light is used to treat the skin, reducing acne and clearing up oily skin. If it’s good enough to give the skin a good healthy crisp, it’s not great for your eyes.

In 2016, the Vision Council did a comprehensive study on the long term effects of blue light, as well as making suggestions on how people can reduce their exposure. Their study found that digital eye strain affects people of all ages, with 87.7% of ages 18-39, 82.6% of ages 40-59, and 76.3% of people ages 60 and above being affected by digital eye strain. They assert that we should be all following the 20-20-20 rule, taking a 20-second break from the screen every 20 minutes and looking at something 20 feet away. They also suggest reducing overhead lighting, and positioning ourselves at arms distance from our screens for proper computer use. Sadly, we often don’t have control over our work space, and when gaming it’s very easy to forget the time. That’s where Gunnar comes in.

My Gunnars from a few years ago on the left, versus the new Scopes on the right.

Gunnar Optik glasses feature a patented, doctor-recommended, lens technology that is proven to reduce 65% of incoming HEV blue light from the various sources I mentioned above. Comparatively, despite my best attempts, I was unable to find any contemporary that would go any higher than 30%, including Crizal and Blutech – two of the leaders in the industry. Better yet, it does this without distorting the image, even at the edges. The only thing you’ll notice is the slight yellow tint of the lense, which closely approximates natural lighting. Better still, after using these for literally years at this point, I’ve stopped noticing any difference. If anything, I tend to notice that skin tones look more natural and less washed out on brighter televisions. As a cherry on top, they also block 100% of UV rays, and without using polarization, which would otherwise show you every time a screen refreshes.

One of the things I loved most about these glasses that continues to be true today is that they are exceedingly lightweight. It’s easy to forget that you are wearing them. Instead of straight arms, the Gunnar Scopes I’m wearing have a slight curve to them, attaching with a hinge design with no screws or fasteners. Again, I have a comparator to say that this fastener style will last at least four years, and likely well beyond as my older pair of Gunnar glasses are showing no signs of wear, despite daily use. In terms of balance, the weight of the glasses is centered roughly a quarter of an inch past the hinge points, meaning they are not heaviest at the lens. This is why they tend to stay in place as they aren’t ‘front heavy’. To help them stay put, there are also the usual adjustable silicone nose pads to rest on the bridge of your nose.

I use these literally every day. The screen reflection is a great example of the reason why…

Beyond their continued technical innovations, Gunnar has been listening to their fans. They’ve heard people’s requests for more customization, and that’s appeared with a strategic partnership with Blizzard. With firm pressure, you can slide the sockets (the pieces on the arms that sit against your head) off of the glasses, allowing you to attach a number of cool designs. These temple sleeves feature such iconic characters as Kerrigan, Diablo, Tyrael, Valla, Azmodan, Nova, Zeratul, and other characters from Blizzard’s Heroes of the Storm game.

I mentioned the black protective bag containing the new Gunnars, but I also need to take a look back to 2014. The previous set shipped with a pearl white bag that, after almost four years of use, looks fairly disgusting. The new black bag should look better after extended use, but its white colored predecessor provided a good longitudinal study on its protective abilities. After over 1000 days of use and faithful storage inside the bag, my 2014 Gunnars don’t have a single scratch or blemish on them. Black, white — both will keep your glasses safe for a very long time.

Regardless of whether or not you are a prescription user or not, all Gunnars carry a one year warranty. Non-prescription glasses also support a 30 day swap-it guarantee if you find that you don’t like the look and feel of what you’ve picked up.

With reduced prices, more customization options, and a continued devotion to comfortable high-tech blue light reduction, the Gunnar Scope glasses are the perfect blend of technology and comfort.

Ron Burke is the Editor in Chief for Gaming Trend. Currently living in Fort Worth, Texas, Ron is an old-school gamer who enjoys CRPGs, action/adventure, platformers, music games, and has recently gotten into tabletop gaming. Ron is also a fourth degree black belt, with a Master's rank in Matsumura Seito Shōrin-ryū, Moo Duk Kwan Tang Soo Do, Universal Tang Soo Do Alliance, and International Tang Soo Do Federation. He also holds ranks in several other styles in his search to be a well-rounded fighter. Ron has been married to Gaming Trend Editor, Laura Burke, for 21 years. They have three dogs - Pazuzu (Irish Terrier), Atë, and Calliope (both Australian Kelpie/Pit Bull mixes).
Related Articles: Gunnar Optiks Scope glasses, Hardware
Share
Tweet
Share
Submit