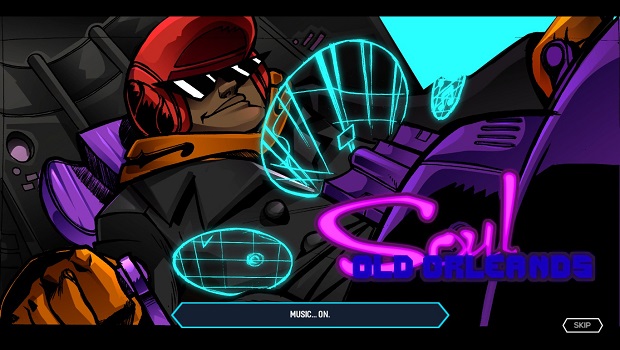 David Bowie, Prince, Michael Jackson. We’ve lost so many 80s legends over the past few years that it’s kind of depressing, to be honest. However, these people remind us that the music back then was top-notch, and rhythm games that get their inspiration from that era are always a treat. Enter Stereo Aereo, a rhythm game that is very clearly ripped from the 80s, with a retro radical style and some old-school difficulty peppered into its soundtrack. Does the game have what it takes to be a loving homage to its inspirations?

Stereo Aereo takes place in a futuristic world with some 80s motifs infused within. The eponymous rock band is facing some financial troubles when the members get a gig, and must get to their destination quickly. However, throughout their galaxy are a bunch of obstacles such as policemen and mobsters, and the band needs to use the power of music to steer clear of the torrent of debris in its way. The presentation is adequate, with some nicely drawn still cutscenes interspersed between stages. They’re nothing spectacular, but they get the job done.

The main game has you control one of three members in Stereo Aereo, each with their own spaceship. Using the left, right, and up keys (or a gamepad), you have to dodge random obstacles such as cars or asteroids across a field of five different lines, with the playing field reminiscent of Rock Band or Guitar Hero. Dodging obstacles at certain intervals will give you a rating (hit, okay, good, perfect, or crazy, with the last one being awarded with a near-miss). While you need to dodge most obstacles, there are some which you can shoot for points (and some you may have to in order to avoid taking damage). Getting hit too many times will result in a game over, but you can replenish health for all but the hardest difficulty.

The trick to doing well in the game is by chaining up combos by dodging and shooting. This is where Stereo Aereo shines; due to its unconventional scoring system, you aren’t chained to a “full combo” score like most other rhythm games. The game rewards risky playing behavior, with crazy ratings giving you a double multiplier per dodge. You’ll have to think fast in order to chain combos or miss obstacles entirely, as getting hit results in resetting your combo and risking a game over. I found the gameplay to be refreshing in terms of scoring points, as this system means there’s no absolute maximum score amount, and I wish that future music games could follow suit.

However, while Stereo Aereo favors perfect play, it’s a little less forgiving for everyone else. While the easiest difficulty gives you six hits before you perish, there’s really no mercy invincibility after you get hit once, and sometimes in a string of difficult dodges, I would go from full health to game over in seconds. It’s one thing to be challenging, but to put a string of nigh impossible asteroids to dodge is a bit unfair. This is bearable on easy, but it makes the harder difficulties impossible. At the time of writing, only two users have actually charted on the hard and insane story difficulties, and it’s easy to see why. The level design is pretty convoluted too, since you go right to the beginning of a stage in story mode if you do end up losing. This ends up being super infuriating on later levels, since there’s always one insurmountable obstacle that’s always seemingly within reach, but because of the aforementioned lack of mercy invincibility, you end up losing on the same segment every single time. Boss battles, which constitute the end of half of the game’s eight stages, are especially annoying, since they seem to rely on objects that are impossible to dodge until the last possible second. You’ll have to be super quick with your reaction speed, otherwise say goodbye to half your lifebar! These experiences were unfair and only contributed to my frustration with the game’s lack of checkpoints or continue system.

Unfortunately, for the genres it tries to emulate, Stereo Aereo’s music falls flat. While I do appreciate the different sounds for each level (ranging from a rock to electronic), they end up being forgettable and uninspired. Other than distinct genres, I couldn’t really tell you what music was on the second stage compared to the fifth one, and the soundtrack isn’t something I’d put on my Mp3 player after I finished. Considering this is a music game, it messes up the one thing it needs to succeed. However, when played in-game, it does its job, and I do appreciate the fact that each track has clear cues to dodge and shoot, even if the difficulty makes the whole affair unnecessarily hard at times.

It would help with more memorable music, to be fair.

Stereo Aereo is a functional music game. While it has a very cool scoring method and control scheme, it’s ultimately plagued by unforgiving and frustrating gameplay plus a generic soundtrack. Play this one if you’re looking for a fun time-waster, but there are better titles to which you may rock out.

Elisha Deogracias is an aspiring accountant by day, freelance writer by night. Before writing for Gaming Trend, he had a small gig on the now defunct Examiner. When not being a third wheel with his best friends on dates or yearning for some closure on Pushing Daisies, he's busy catching up on shonen manga and wacky rhythm games. Mains R.O.B. in Smash. Still doesn't know if he's a kid or a squid.
Related Articles: Stereo Aereo
Share
Tweet
Share
Submit