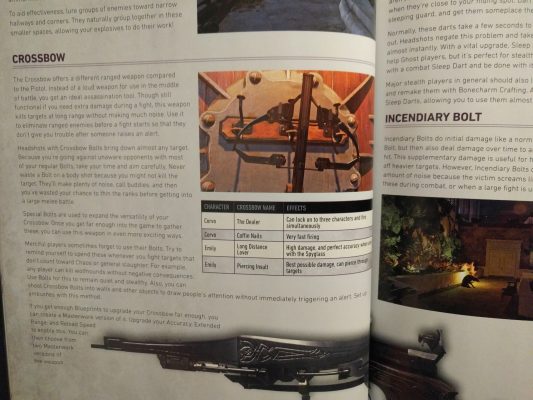 Dishonored 2 is very much about choice. The level of player agency in the game is so much more than the simple analog choice of stealth versus violence. Prima has tackled this multi-threaded adventure game with a hardbound 256-page guide, detailing not only approaches to each level, but also every Bonecharm, Rune, Painting, and Blueprint. It’s time to step into the shoes of Corvo Attano or Emily Kaldwin and take back what’s yours.

Weapons and powers get a thorough showing

In practice, unless you are forcing a purist approach, most of your runs in Dishonored 2 are going to be a blend of stealth and action. The Prima guide provides an entirely bloodless approach, as well as an entirely slaughter-based assault. How you mix and match, and at what ratios, is up to you. The combat approach is a bit more straightforward than the stealth one, but it’s still nice to see them delineated so you know the advantages (and disadvantages) of each. Where the guide helps is in the descriptions of powers and weapons that you’re given throughout the game.

There is a common pool of powers between Corvo and Emily, but both also have a unique power set. The Prima guide details all of these, giving a power cost overview as well as a description of what the upgrades will provide. While the weapons are common, how they are applied and what additional powers can be attached vary wildly between Corvo and Emily as well.

Some fantastic artwork throughout this guide

Like most of Prima Guides, there is some high quality artwork sprinkled throughout. I particularly liked the enemies section, but there is a large piece of art on nearly every page, so there’s plenty of eye candy to enjoy.

If there is one aspect that frustrates, it’s that the book was clearly written before the final balancing to the game was complete. As such, there are some inaccuracies I encountered. Some collectibles were not present where they were stated. As a completionist, this is problematic as you encounter more charms or runes than what’s spelled out here, or runes not in the precise spot. The problem is compounded later in the guide as there is a great amount of gold and valuables lying around, but the guide doesn’t detail where to obtain them.

I particularly liked the section on enemies

Somewhat like the collectibles, the descriptions for puzzles are occasionally either incomplete, vague, or obtuse. One early bone charm is locked in a safe, the two-part combination being held on an Overseer Captain’s desk and on a nearby table guarded by an Overseer. The book says “Obtain the safe combination by reading the note and the book close by”, leaving you to figure out that the note is in the room with two guards — a risk you might otherwise skip.

The maps also feel somewhat incomplete. Some areas aren’t clearly marked, and much of it relies on the muddy descriptions to guide you from here to there. When you do arrive, there’s a good bit of backtracking written into the walkthru for the area. As an example, in one section the book tells you to proceed upstairs and search for things, but then tells you to go back downstairs to get a combination for a safe. Why not get it when I walked by it the first time?

In the back of the guide is a comprehensive index of achievements, but the next page gives a general idea of how you might achieve each one. Some are simple, and some require a little bit of work, so this is a solid reference document.

There are collectible paintings in Dishonored 2, and the Prima Guide does a great job of detailing them alongside a picture of each. This is pretty handy as there is a lot of non-collectable art in the game as well, so knowing which one to grab is sometimes the forest among the trees.

Arkane’s signature style is well represented in the collectible artwork

The Collector’s Edition of Prima’s guide comes with eight 8.5” x 11” lithographs rendered in Arkane Studio’s signature art style. Three of these lithographs are actually Wanted posters; one for Mindy Blanchard, one for the Howlers gang members, and one for Paolo – their enigmatic leader. The remaining five are split between advertisement and Abbey-backed propaganda. Of the eight, I particularly liked the crimson-colored Razina Rosewater Jelly advert, and the Abbey recruitment/fundraising poster.

Another aspect I particularly enjoyed was the cover itself. Colored in a slick jet black, the guide features the face of Emily on one side, and that of Corvo on the other. It’s a cool representation of the dichotomy of choice presented in the game, and looks sexy on the shelf to boot.

Like all Prima guides, included is a code for their online eGuide. As usual, this makes for a great second-screen experience if you’d prefer to have a tablet or phone nearby to reference. The maps being expandable is fairly handy as you can set them full screen on your tablet and leave them there as reference. It’s not the high-quality interactive map we’ve seen in other guides, but it does the job.

Not as accurate or as complete as some guides, the Dishonored 2 guide shores up its shortcomings with excellent art and some great reference sections regarding stealth and combat approaches. Thankfully, the electronic guide can be updated, but the book is still a decent addition to the library.

Ron Burke is the Editor in Chief for Gaming Trend. Currently living in Fort Worth, Texas, Ron is an old-school gamer who enjoys CRPGs, action/adventure, platformers, music games, and has recently gotten into tabletop gaming. Ron is also a fourth degree black belt, with a Master's rank in Matsumura Seito Shōrin-ryū, Moo Duk Kwan Tang Soo Do, Universal Tang Soo Do Alliance, and International Tang Soo Do Federation. He also holds ranks in several other styles in his search to be a well-rounded fighter. Ron has been married to Gaming Trend Editor, Laura Burke, for 21 years. They have three dogs - Pazuzu (Irish Terrier), Atë, and Calliope (both Australian Kelpie/Pit Bull mixes).
Related Articles: Dishonored 2 Prima CE Guide
Share
Tweet
Share
Submit