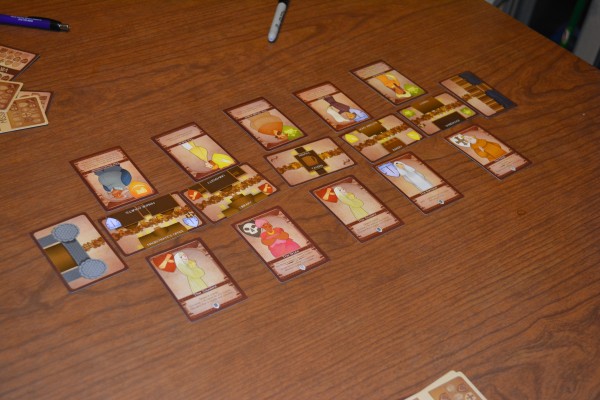 Medieval citizens were a real pain. Whether they were complaining about taxes, rights, or the occasional bubonic plague, it seemed they were never satisfied. In Green Couch’s Fidelitas, those pesky medieval citizens can finally do something about the political elite that control everyone and everything.

Fidelitas is a card game where the player’s goal is to influence the citizens. You do this by using the cards to move citizens to various locations in the town. Once a certain group of citizens is in the right location, you can score points from your mission cards. Every player has their own mission cards, so you are vying for “control” of different people throughout the game to complete your own missions.

You begin by setting up the town and populating it with random citizens. Each player is then dealt four cards: two Virtus and two Missio. The Virtus cards serve as your citizens to be placed in town and moved around based on the Virtus card effects. Missio cards are the missions you’re trying to accomplish by getting the citizens exactly where you need them to go. Some Virtus cards are placed in a building that corresponds to the citizen’s guild. The student, for example, can be played at the library or university. Others, such as my personal favorite, the miscreant guild, act as wild cards and can be placed in any location. Virtus cards let you either move or remove other citizen cards, so even though you might be forced to play a card in one guild location, the Virtus’ effect may still allow you to move citizens from other guilds. Once the Missio requirement is met, you declare it to score points. Some Missio cards require you to remove all the cards from the set to score the points. Missio values vary depending on the difficulty of putting certain group of citizens together.

The concept of the game works in theory. There’s a particular challenge in moving citizens around to complete your mission while not making it obvious to your opponent what you’re trying to accomplish. There’s also some mischief to be made since some citizens’ abilities allow you to remove other citizen cards from the town. The game flows nicely and the caricature artwork is entertaining. Green Couch even threw in a little wooden shield to act as a first person token. In general, it plays and looks like the fun, little card game it was designed to be. At the end of my play through, my partner and I decided we liked the game enough to play it again. It was then that flaws in the game became noticeable.

One flaw is cosmetic. After just a few shuffles of the deck, the cards were noticeably flaked. The flaking effects the colored borders of the cards which is the only real distinction between the Virtus and Missio cards since the caricature artwork is exactly the same. Many of the cards also started to bend in the middle after our second game. This alone doesn’t ruin the game, but quality components are a prerequisite for any game that hopes to make it to the table with some frequency.

That’s where the game’s longevity really comes into question. Winning the game can happen one of two ways: by obtaining a total of ten victory points or having the lead when the Virtus deck has been exhausted twice. In the first play through, my wife won by hitting the ten point mark. In the second game, I realized what missions she was trying to complete. It won’t take you long to realize that either. With a finite number of missions, it becomes obvious which are trying to be completed when everyone ends up meeting at a certain building. A new strategy came from this, instead of going for ten points, a player could simply gain a lead and then play spoiler until the deck is run through a couple of times.

This can quickly bog the game down. This is particularly evident in a two player game. While the occasional bit of vengeance can be fun, repeated use can take it from a light card game to a frustrating experience as the game drags on longer than it really should. There’s no reward for getting a higher value Missio in your hand as your opponent can score easier Missios at will while destroying your best laid plans. While this may sound like a strategy, it’s not. Nothing can suck the fun out quicker than playing the card version of Sisyphus, putting together a plan only to start over and over again every time the end is near. The longer you play this game, the more evident this problem becomes. Your ability to succeed in this game will be determined as much by the whim of your opponent as your luck at pulling a particular card.

The game has an interesting premise but can easily become an exercise in frustration if playing with people that revel in a “take that” approach. A non-competitive group would probably get more mileage from this game, and it would help if the game doesn’t reach the table too frequently. If your game group enjoys the theme and rotating games, then this lightweight card game is worth a look. Otherwise, there’s no shortage of light card games, or medieval themed games for that matter, that would better fit the bill.

Fidelitas is an intriguing card game where you influence members of a medieval town. It has a some interesting ideas in moving citizens around, but ultimately comes up short in both quality of components and replay ability.