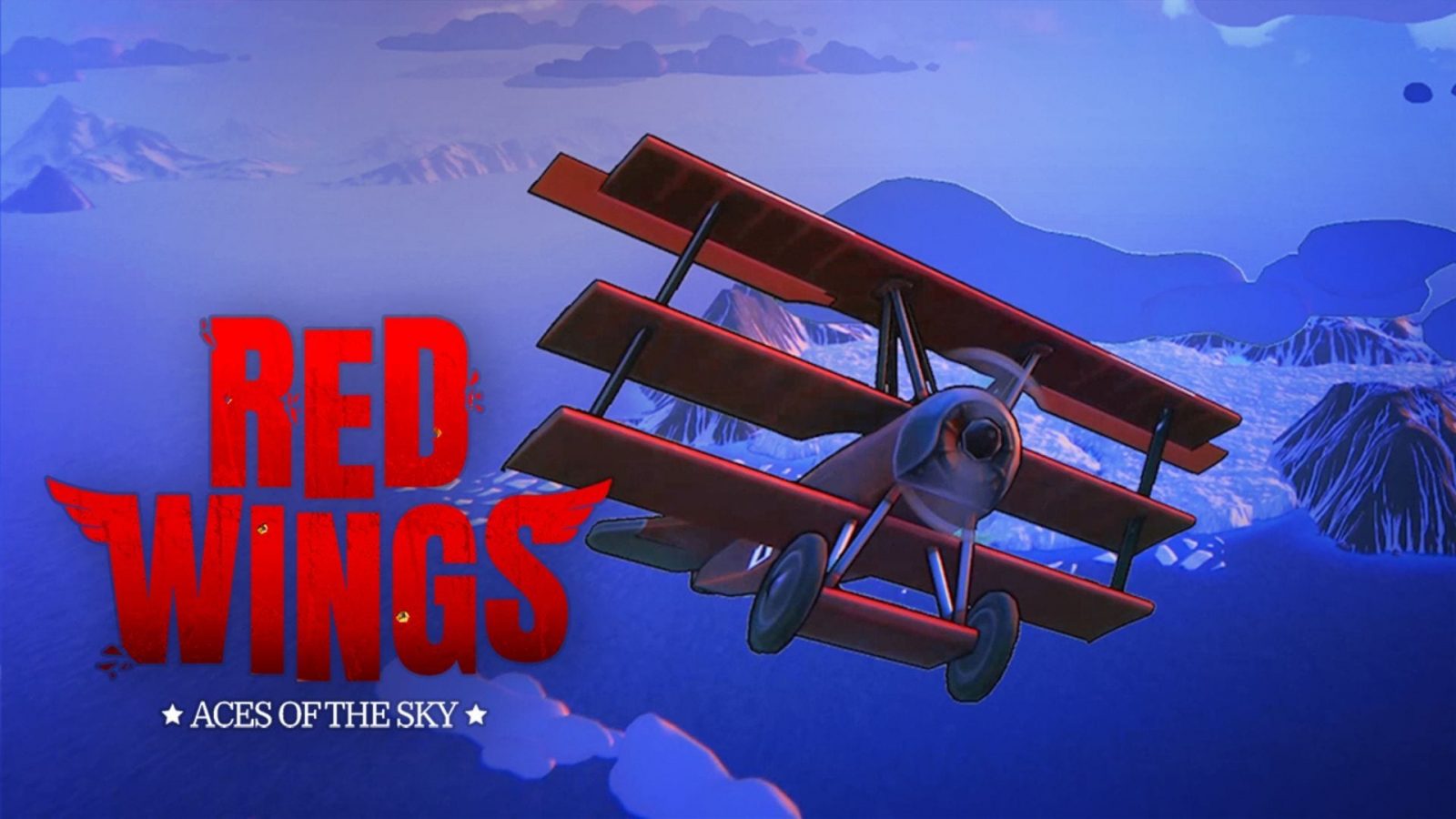 We’ve all heard retellings of the horrors of World War One. Muddied ditches, barbed wire fields, land mines, disease… Millions suffered and died. World War One was also the first major war to heavily involve military aircraft, and the soldiers in the sky were not immune to the death and destruction below, oh no. They faced struggles of their own. In Red Wings: Aces of the Sky, you experience their version of the story… locking on to enemies with 100% accuracy, barrel-rolling to ram other planes out of the sky while invincible, or flying through magical glowing hoops that restored them to full health and filled their gas tanks… War truly is hell…?

Red Wings: Aces of the Sky is a souped-up arcade game centered around World War One air combat. You see both sides of the conflict via both an Entente Powers (Allies) campaign and a Triple Alliance (the bad guys) campaign. With the allies, you become the great rival of Manfred von Richthofen, the Red Baron, and with the Triple Alliance you fight alongside him. The plot of each campaign is driven by the missions themselves, and by comic-like cutscenes narrated by an old-timey voice as if in letters being sent back home by a soldier.

Gameplay isn’t that dark as far as war games go, (it’s rated E-10). There’s no blood or screaming (not even a Wilhelm), and the graphics aren’t pseudo-realistic; they’re bright, simple, and reminiscent of a comic book. It’s also ridiculously easy most of the time. It definitely strikes me as a game made mostly for kids despite its unavoidably heavy subject matter. Flying is dead simple in this game. The left stick handles pitch and rotation, the right stick changes throttle, the left trigger locks on to enemies, the right trigger fires, and the A, B, X, and Y buttons are power moves.

You can’t stall yourself by reducing your airspeed and facing straight up, and crashing directly into other planes only does around a quarter damage to you. “A” turns your plane on a dime 180 degrees in the opposite direction, “B” initiates a barrel roll, during which you’re invincible, “X” calls for squadron assistance, and “Y” is finishing move where your pilot pulls out a pistol and headshots an opposing pilot in a moving plane, which then explodes, so it’s obviously not the most realistic game. Credit where credit is due: the sound in the game is great. The menu has lovely old-timey music, the scenes in between missions have excellent voice work, and the game sounds are somewhat realistic and well balanced. 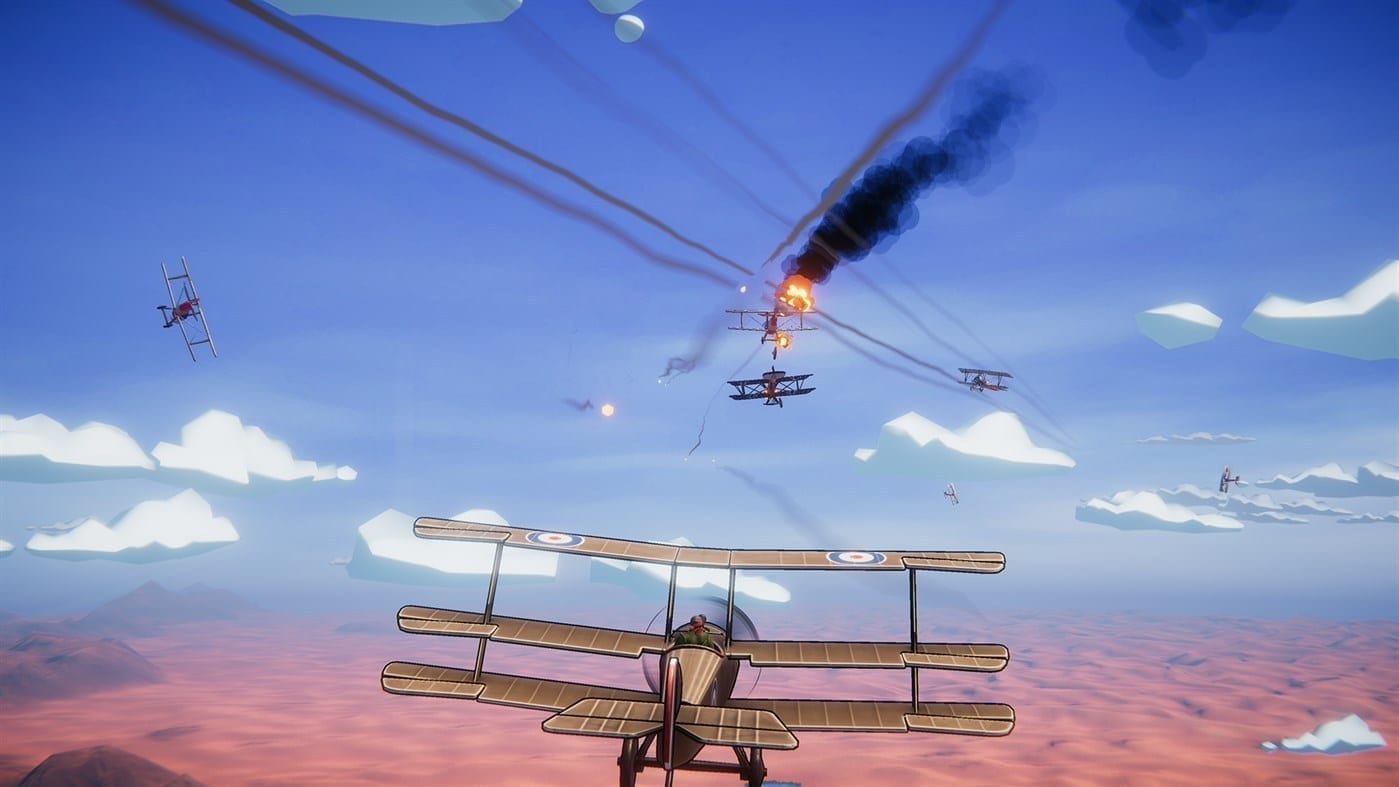 Holding down the left trigger locks your crosshairs directly onto the target, there’s a radar that shows you where all enemy planes are and what direction they’re facing, and barrel rolling makes you temporarily invincible so enemy bullets all miss and you can bash into enemy planes and destroy them. It’s undeniably fun at times, but it’s also very easy. The cutscenes between missions are nice looking, but usually don’t seem to go anywhere, and the missions themselves get very repetitive. The game attempts to increase the difficulty of the game by giving some enemies shields that regenerate and so on, but it doesn’t help that much and it makes the game a little less fun. There is no taking off or landing – the game just spawns you into mid-air as a mission begins.

As you beat chapters, you earn credits that can be used to improve your plane. The game’s difficulty also slowly increases, so the improvements you make with your stats tend to get cancelled out. You can unlock new planes and new skins for them as you go, too, but to be honest, I noticed very little difference between the planes other than the way they look, so I didn’t have much interest in experimenting with them.

Red Wings: Aces of the Sky

In summary, when it comes to Red Wings: Aces of the Sky, there just isn’t that much to talk about. It’s a fun little game for a while, but it gets repetitive quickly, and it’s very easy. I think most experienced gamers will enjoy it for a couple of days and then forget about it because it doesn’t inspire any strong feelings or make you want to go all completionist on it for the achievements.

Tim, originally from where Fallout 76 takes place, is a writer, soccer player, cook, baker, and of course, gamer, just looking for his teammate-in-crime. When it comes to gaming, he enjoys long walks on the beaches of Normandy. He loves traveling, especially fast traveling because it saves lots of time. He's 6' 4" so he's saving up for an XL standing desk for his TV and Xbox. He's just as comfortable going out on adventures as he is staying in with a glass of Nuka-Cola. He's very easy-going, or peaceful-going, or whatever the easiest difficulty is called. If you want him to, he'll tell your parents you met him at the Winking Skeever.
Related Articles: Red Wings: Aces of the Sky
Share
Tweet
Share
Submit