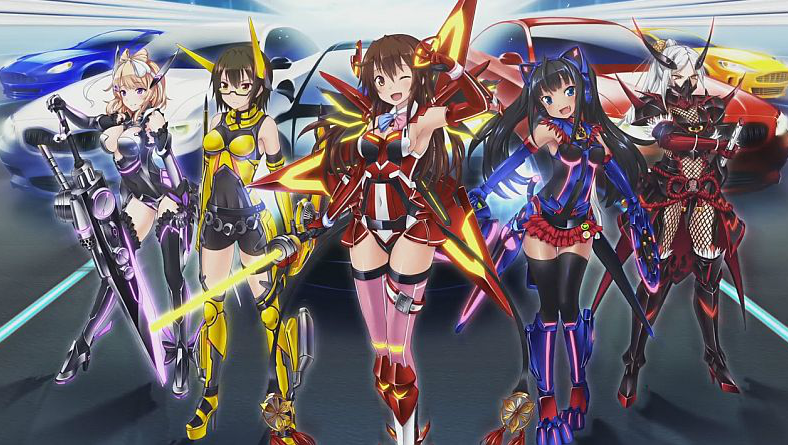 Video games are so weird. You play so many games and do so many strange things in them that they all start to blend and blur, making it very easy to overlook the madness you are taking part in. Then a game like Drive Girls comes around. The game opens your blinded eyes, forcing you to see the very essence of insanity that is an interactive game. Because, in Drive Girls, you play as busty fighting girls who turn into racing cars.

I know what you’re thinking: “Vroom, vroom.” That’s because you’re still in your car form. Any human person playing Drive Girls is going to have a lot more complex and shameful thoughts while playing. I hate myself for how much I love this game. It’s terrible, but it is totally strange, and while it adheres to every single terrible trope and the standard gaudy hypersexuality found in many JRPGs today, there is just enough unique intrigue to make me want to try to get past it all.

Drive Girls has a story, and that story is one where events are occurring, but Heaven take me if I am able to actually enlighten you into its finer details. Like a lot of games in this niche, there is an element of coming together where characters meet and learn about each other, and there is also an academy setting where the characters are more or less student-employees.

I call this game a JRPG, but while there are strong elements of both “J” and “RPG” throughout, the game is more akin to a Samurai Warriors style hack-and-slash brawler. As the story progresses, you’ll be travelling across the world via cutscene, but all the battles will take place in a general arena that seems to just kind of travel with you. It’s beyond lazy, but it is for a gameplay reason.

That reason is that while you are hacking and slashing your way through the “bugs” that make up the enemy hordes you fight, you’ll have the third option of transforming into a car and ramming into the enemies. The arena is set up as a long stretch of futuristic space highway, and you drive from point A to point B to progress, killing enemies and bosses as you go. There are mini arenas, circular with raised sides, but for the most part you’ll be fighting in long, corridor-like stretches.

Fighting is a lethal meeting of mostly broken and largely boring. Button mashing is the only real strategy, so it’s just enemies coming in a flood and lots and lots of standing and hacking. There is even a character who, for maximum effectiveness, just slams her weapon into the ground over and over in front of her as enemies walk right into it. Only once did an enemy stop, walk around me, and attack from behind. The only explanation I have is that the little guy became sentient for a brief moment, only to be quickly rammed by my car form.

The car form is signature, and boy does it deliver in terms of silly ridiculousness. A quick button press transforms you from girl to car, and it can be done pretty much at any time, with no meter to fill or anything like that. While in car form, you can drive around, do some pretty sick drifting, and also use a spin attack which twirls the car in a circle like a fidget spinner. One hit will pull you out of car form, and stun you momentarily.

The rest of the game, from top to bottom, is forgettable and messy and beyond stupid, but I think I could do the drifting to attack for the rest of my life and be pretty content. It’s an arcade explosion of pure fun, mindless and over the top with the ability to do massive amounts of damage and cascade gracefully from spot to spot. Combined with the incredibly stupid spin attack, and the more standard attacks you use in human form, the game actually provides a fairly deep battle system.

It is unfortunate that Drive Girls is mired in such mediocrity, with such uninspired and utilitarian arenas and simplistic, almost auto-pilot fights. The fact that there is such an exciting, unique, and fun battle mechanic in the game and it still fails to meet a low standard of quality is highly disheartening.

The graphical quality of the world around you and the human models are decent, but if you play any JRPG or any anime based video game you’ve seen this before. The car models, however, are so bad. Jagged, polygonal, and vaguely sporty, there is an enormous gap between the detail on the girls themselves as opposed to the car forms they take. The game is called Drive Girls, and is focused on that shtick, so it is surprising to see such a poor attempt with the vehicles.

Drive Girls is a hack and slash slog where you quite literally drive girls who transform into cars to fight evil bugs. It is every bit the stupid, ridiculous, freaky fun game that it sounds like, and has some guilty pleasure elements that can endear it to players even while they recognize it is a total wreck. Battles are unique, but ultimately boring, and a bad story and lackluster look makes Drive Girls a mostly forgettable mess.

Patrick Rost has been with Gaming Trend since 2013. At first focused on sports coverage, Patrick has gone on to cover a wide range of games and other products for the website. Outside of Gaming Trend, Patrick writes and records music, grinds perpetually in Elder Scrolls Online (PS4), and lives day to day with his two dogs, Bob and Stella.
Related Articles: Drive Girls
Share
Tweet
Share
Submit