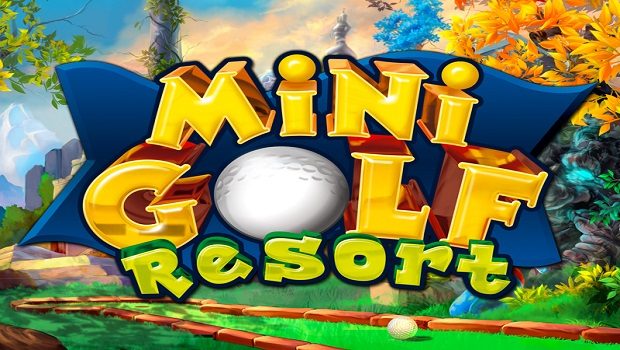 The hardest games to review are not the ones that are exceptionally great nor horrendously bad, but ones that fit smack dab in the middle of those extremes. It’s with this mindset that I’m going through Teyon’s Mini Golf Resort, a 3DS port of a Wii game. While it’s a fun experience with a lot of content, it’s riddled with some weird mechanics and unpredictable bugs that ultimately hinder my enjoyment with the whole affair.

Released back in 2010, Mini Golf Resort was a Wii title that had you putting through over 1,000 holes through four different worlds and dozens of courses. While the main game hasn’t changed, I still found the amount of content overwhelming, and at $4.99, this was a lot to process. However, some holes did end up being similar to other ones, so your mileage may vary on that claim.
Gameplay is simple and intuitive; using the touch screen and circle pad, you can adjust your aim and shot power. Since this isn’t real golf (and thus reliant on a more complex swing system), this control scheme works adequately, and I was lining up shots with ease. However, with no constant guide or grids to help you out, you have to keep guessing how far your shot might go, and that’s an issue when faced with longer holes. Thankfully, you can purchase power-ups to assist you in holes (such as adding a guide for a shot or skipping the hole altogether), which is a nice touch when you have a frustrating hole with which you want to complete.

Once you finish a course of 18 holes, you’ll be rewarded with in-game currency where you can purchase the aforementioned power-ups and clothes for your selected avatar. There are also achievements you can accomplish, such as finishing all the courses in a given world or getting a birdie. They’re not too taxing, and will take some time before you can grab them all.
The graphics in this port are less than average, and for a 2016 release of a game from 2010, that’s saying something. Think Mario Golf for the Game Boy Color rather than, say, Mario Golf: World Tour. While the four worlds are distinctly different from each other, there isn’t anything that sets Mini Golf Resort apart from the slew of other golf games. The music is serviceable and generic; it can get grating at times, but it gets the job done. You select a male or female avatar with some limited clothing options but can purchase more as your advance in the game. The customization is purely aesthetic, and has no effect on how the game is played, which is disappointing.

Normally, this would be a functional, if unremarkable, experience. However, Mini Golf Resort is also plagued with a weird sense of physics. Golf balls don’t roll as far as they should, and in some cases, can get pretty darn close to a hole without getting sunk. Since this is a mini-golf title, there are different obstacles lined up such as fans and speed ramps, which make the physics engine dreadfully incompetent at times. If you don’t land a shot perfectly, you can end up botching it completely. Add that to the fact that you’ll encounter these unnecessary gimmicks frequently, and you’re gonna have a bad time.
Not that any of that matters. You can simply take a mulligan at the cost of adding a stroke, and hitting a stroke out of bounds only adds one to your current stroke count. If you feel especially miffed, you can retry the hole completely, with no adverse effect on your current score. The stroke limits for hitting par can get absurd at times (there was one hole that had a par of 8, and I ended up using only 4 strokes for it. What’s better than an Albatross but worse than a hole-in-one?) With this in mind, it’s weird to say that with all these faults, Mini Golf Resort is still an enjoyable portable title at times. It’s simple to play and has a lot of holes to offer, and it feels appropriate as an eShop download.

While it’s a decently fun time for 5 bucks and easy to pick up and play, Mini Golf Resort is an unremarkable 3DS port of a game with generic design choices and some strange physics.

Elisha Deogracias is an aspiring accountant by day, freelance writer by night. Before writing for Gaming Trend, he had a small gig on the now defunct Examiner. When not being a third wheel with his best friends on dates or yearning for some closure on Pushing Daisies, he's busy catching up on shonen manga and wacky rhythm games. Mains R.O.B. in Smash. Still doesn't know if he's a kid or a squid.
Related Articles: Mini Golf Resort
Share
Tweet
Share
Submit