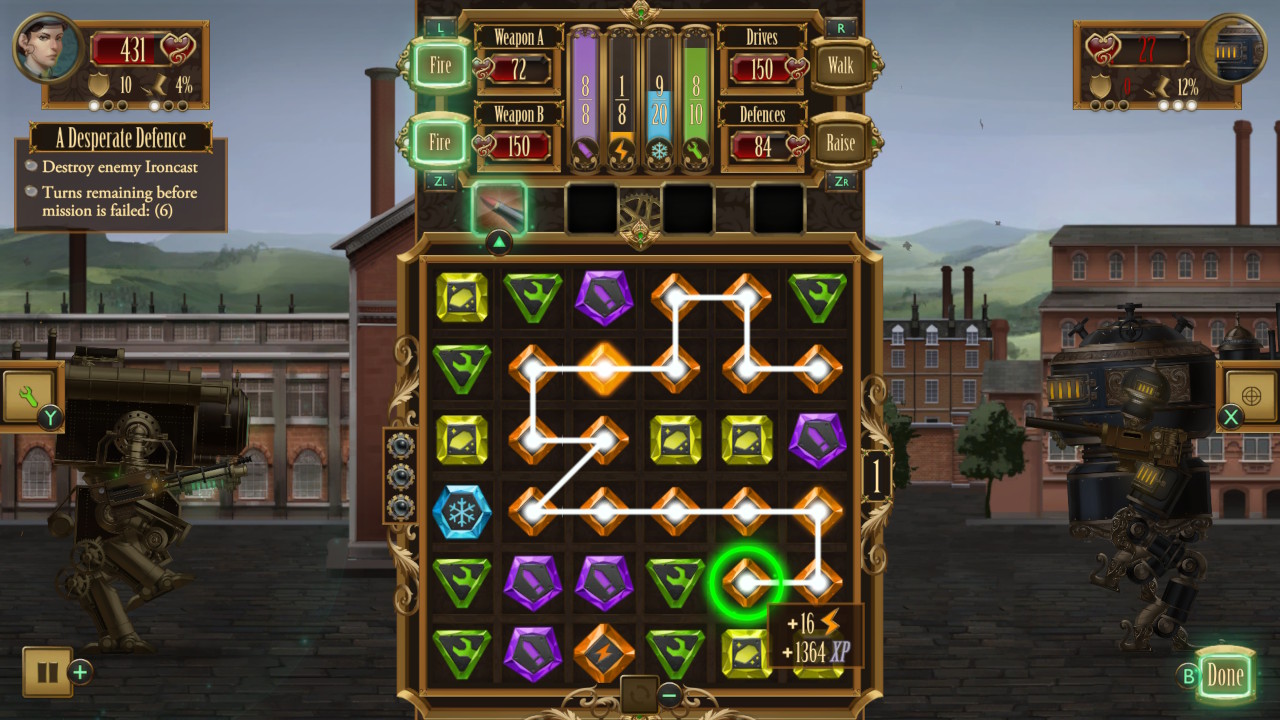 The year is 1886 and a war is being waged between the British and the French over a power source called Voltite. This new, clean energy was developed by the French, but because they kept it to themselves, the British resorted to stealing some of it. This resulted in mechs called Ironcasts fighting to obtain more Voltite for both sides.

Learning the story at the beginning

In the story, characters have Voltite to power their Ironcasts, which is represented by players matching nodes. You have two matches you can make per turn, which you do by clicking and dragging a white line through the nodes you want. You can only match nodes with nodes of the same color, but there are some exceptions. There are white orbs called overdrive, which are saved up and give extra power to the next system used. You’ll also find links that allow you to grab onto a different color and continue to lengthen your match. This is especially helpful for collecting resources fast.

The Ironcast has four meters that help control its various systems and you fill each meter by collecting its specific colored nodes: purple for ammunition, orange for energy, blue for coolant, and green for repair. Your Ironcast will have two different weapons available, which can be swapped out for newer weapons as you obtain them. For variety, it may be better to have a rapid fire gun and a stronger, single shot gun. When you choose to fire either of your two weapons, it consumes a designated amount of ammunition and coolant. On the defensive side of things, you can put up shields or activate your drive, which causes your Ironcast to start walking. You can layer up to three shields at the cost of energy and coolant, and the same applies to the drive. Keep in mind that one stack from both of those systems goes away each turn, so plan accordingly. The only way the stacks go away all at once is if that system’s health drops to zero.

Going back to the systems, they all have their own health you need to keep an eye on. When you attack the enemy Ironcast, you choose to attack either one of their weapons, their defenses, or their drive. Once you do enough damage to a system, it will break and become unusable. This is when you need to use repair to partially fix your component so it will work again. Taking this into account, you’ll want to target whatever systems you think will cause the most problems for you. There are also abilities that you can unlock for your Ironcast that provide a variety of helpful effects. These abilities have cooldowns and will come back after a specified number of turns.

After each battle, you’ll be taken to the hangar to modify your Ironcast. The hull damage that you take carries over, so the most important thing to do is fix your hull. This costs scrap, which you get by completing missions, destroying enemies, and when scrap nodes are matched on the board. Scrap is also used to buy upgrades; these include building new weapons, shields, drives, and even upgrading your health or meter capacities. In order to build new items, you need to obtain blueprints by defeating enemies. What you may or may not get is random chance, so you may get lucky or get nothing. Every time you level up, you get to pick one of three augments. As with the abilities and equipment, you can choose what you want to use before leaving the hangar.

Once you’re done at the hangar, you get to pick one of three missions on your map. The missions available are randomly chosen from a bunch of premade missions. You basically choose what mission to do next based on what rewards you want. You have a few types of missions that can come up: battle, salvage, collection, survival, and trade. Battle is simply destroying the target enemy, salvage involves beating the enemy without damaging a specified system, collection has you gathering a certain number of crates that will show up as nodes, survival challenges you to survive a certain number of turns against a tough enemy, and trade lets you try to make a deal to obtain more scrap or war assets. It’s important to note that all missions have their own specified turn limit to complete it or else you fail.

Even though the missions are random, there are two battles you will always encounter. You will always face the game’s bosses after you complete a certain number of missions. The first boss is a challenge, especially the first time you face him. You may not have a lot of good equipment yet, but if you’re lucky or skilled, you can pull it off. Once you reach the final boss, you realize how tough things can really get. This is actually one of the problems I had with the game. I love challenging difficulty, but it spiked for this end-game enemy compared to everything else. You need to have obtained optimal equipment, abilities, and augments in order to get this done. If not, then good luck trying to whittle it down. That’s all I’ll say there in order to avoid spoilers.

If you die though, be ready to start from the beginning because Ironcast employs permadeath. Don’t worry, depending on how much experience you got, you earn commendations when you die. You use these to buy things for future attempts, including new pilots, other Ironcasts, available augments and abilities, and even permanent upgrades to health, scrap gained, and experience earned. Being able to improve your next attempt takes away some of the sting of losing.

The game is basically a combination of resource management and luck; sometimes you get large matches, but sometimes you don’t get anything you need. This is both a positive and negative aspect of Ironcast; on one hand it’s more challenging, but at the same time you can lose because the board gave you little to work with. Thankfully, you have a refresh option that will give you a new board, but it costs your whole turn to use. (It can be helpful in a pinch, trust me.) That being said, you may be seeing the game over screen more times than you want, but just think of it as one step closer to beating the game.

In the end, Ironcast is easily a fun game that you can get caught up in while playing. It keeps you engaged and planning, but not to the point where it becomes a chore. The soundtrack stays faithful to the older steampunk style of the game as well. It's not a long campaign, maybe a few hours at most, but the permadeath roguelike mechanics offer more replayability. The final boss was definitely the most frustrating thing to me because of how much tougher it is with no real lead-up. Other than that and bad luck with the board a few times, Ironcast has been largely enjoyable experience. A nice addition to the color matching puzzle genre of games.

Codi loves to play video games and watch movies. He will watch almost any kind of movie just to experience them. His ideas take inspiration from the shows and movies he watches, and games he plays. He also loves a good pun.
Related Articles: Ironcast
Share
Tweet
Share
Submit