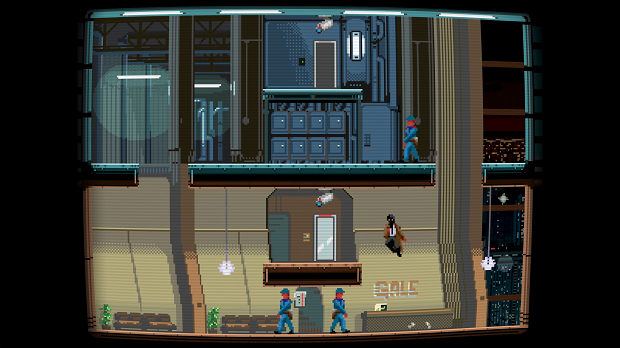 Upon first hearing about Master Spy, it all sounds great: retro style, an intriguing story told through cinematic cutscenes, an original soundtrack. Then you see that it is described as a stealth-based precision platformer. Depending on who you are, this will either catch your interest or turn you off immediately, with not much middle ground.

In this game, you’re the Master Spy, an enigmatic character known for his skill at infiltrating even the most heavily guarded, highest security areas. He doesn’t have to rely on just his expertise, however. He owns a prototype cloaking suit that ensures he’s ready to tackle anything.

You’re dropped into your first mission with little explanation. After successfully breaking into the Gale-Electro building, you’ve verified your reputation and are given your first real assignment. They’ve had a tape reel with top secret communications info stolen, and they believe their rival Feldstrom Futures is responsible. As you sneak through each establishment, the mystery deepens.

It’s only after finishing your first mission that you learn why you’ve been summoned in the first place.

The key to progressing is not eliminating the enemy, as you aren’t carrying any weapons. All you have to do is gather items, dodge obstacles, and reach the exit without being seen. This may seem simple, but when it comes to this platformer, the emphasis is on precision.

Your cloaking suit keeps any cameras or guards from spotting you, for instance, but it also slows down your movement. If you don’t switch it off at just the right moment, it could easily impede you, but if you don’t switch it back on fast enough, you’ll get caught. Your timing needs to be exact.

This is just one of many instances where you need to have your path all planned out.

This level of meticulousness is what may make or break the game for you. Some people get a thrill proving their prowess at video games, gritting their teeth in a mixture of frustration and determination as they play. Multiple deaths don’t discourage them; they just study the level until they’ve learned the pattern they need to pull off to beat it.

Whereas casual gamers – those that tend to play games to be entertained, not to show off their skills – may want to quit before they can get very far. The cutscenes only come between levels, so you really have to earn the story. Also at the end of each level is a report grading you on your speed and sneakiness, handing out an F even if you completed it in just a few minutes. This could be motivational for some but humiliating to others.

The animals you can encounter include dogs, tigers, and sharks.

Don’t get me wrong, Master Spy is not a bad game by any stretch. If you love it, you’ll really love it. It has 50 levels and each is wonderfully unique, providing plenty of variation in scenery along with different enemies and traps to avoid. Between the level changes and the cutscenes, things are kept from becoming repetitive or tedious. There are even secret levels you can unlock!

Mainly, you just need to know what you’re getting into when you play this game. It isn’t something you load up when you want a relaxing afternoon. Every bit of progress has to be fought for. If that sounds exciting to you, then by all means go for it.

Master Spy is not for everyone; it targets a certain niche of gamers, and it does it well. For those who possess the skill and patience to fight through it, this game will be a true gem. For everyone else, consider your blood pressure and play something else.

Sarah Marchant is an office admin for a nerdy t-shirt company. She has a soft spot for indie games, a passion for story-driven titles, and a weakness for cooking games and anything with zombies.
Related Articles: Master Spy
Share
Tweet
Share
Submit