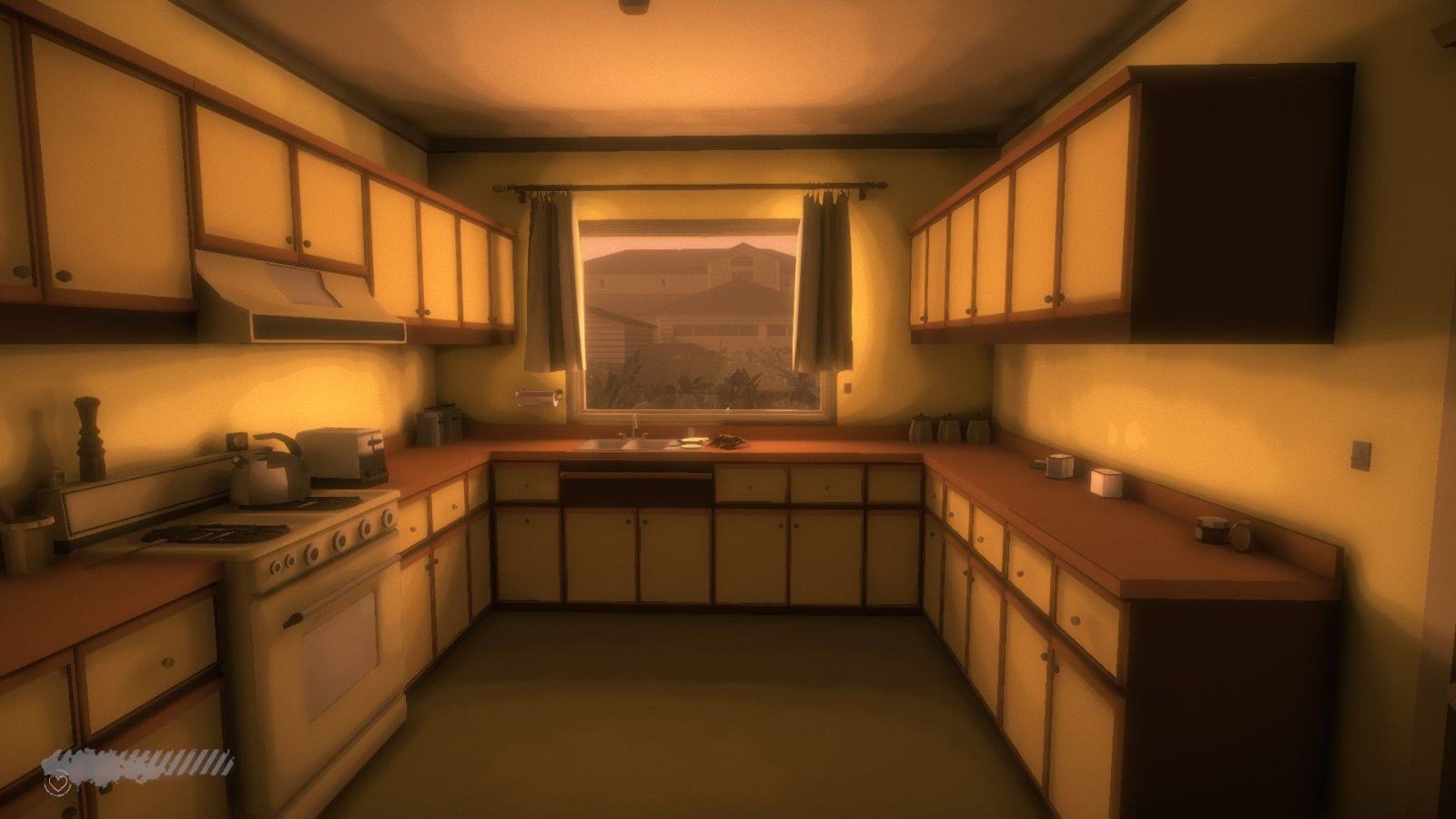 The modern mystery game finds itself in a tricky situation. In many cases, mystery becomes an aesthetic; the detective hat is rarely worn by the player. Instead, the player observes as the protagonist handles the detective work. They need only hunt down highlighted clues then let the game take over. This is the Zodiac Speaking sees this, embraces it, and uses the aesthetic of mystery as a vehicle to take players through the protagonist’s internal struggle.

To that extent, Punch Punk Games’ first-person puzzle game plays more like the walking simulators we’ve grown accustomed to in the past decade. It’s a narrative-heavy adventure that dips its toes into the psychological thriller space, hoping to elicit true fear and pique curiosity through its writing. It was the studio’s dedication to storytelling that led to acclaimed Polish writer Łukasz Orbitowski co-writing the game.

Investigative journalist Robert Hartnell has been consumed by his hunt for the Zodiac Killer — an obsession that has put him in the therapist’s chair once a week. The game is, obviously, inspired by the real Zodiac Killer who, to this day, has never been brought to justice. During Robert’s therapy sessions, he participates in an exercise called “live dreaming,” which sends him to the scene of the killer’s crimes. It’s here where the player must piece together the order of events in which the Zodiac kills his victims, all while avoiding the Zodiac himself, who is still roaming the area. 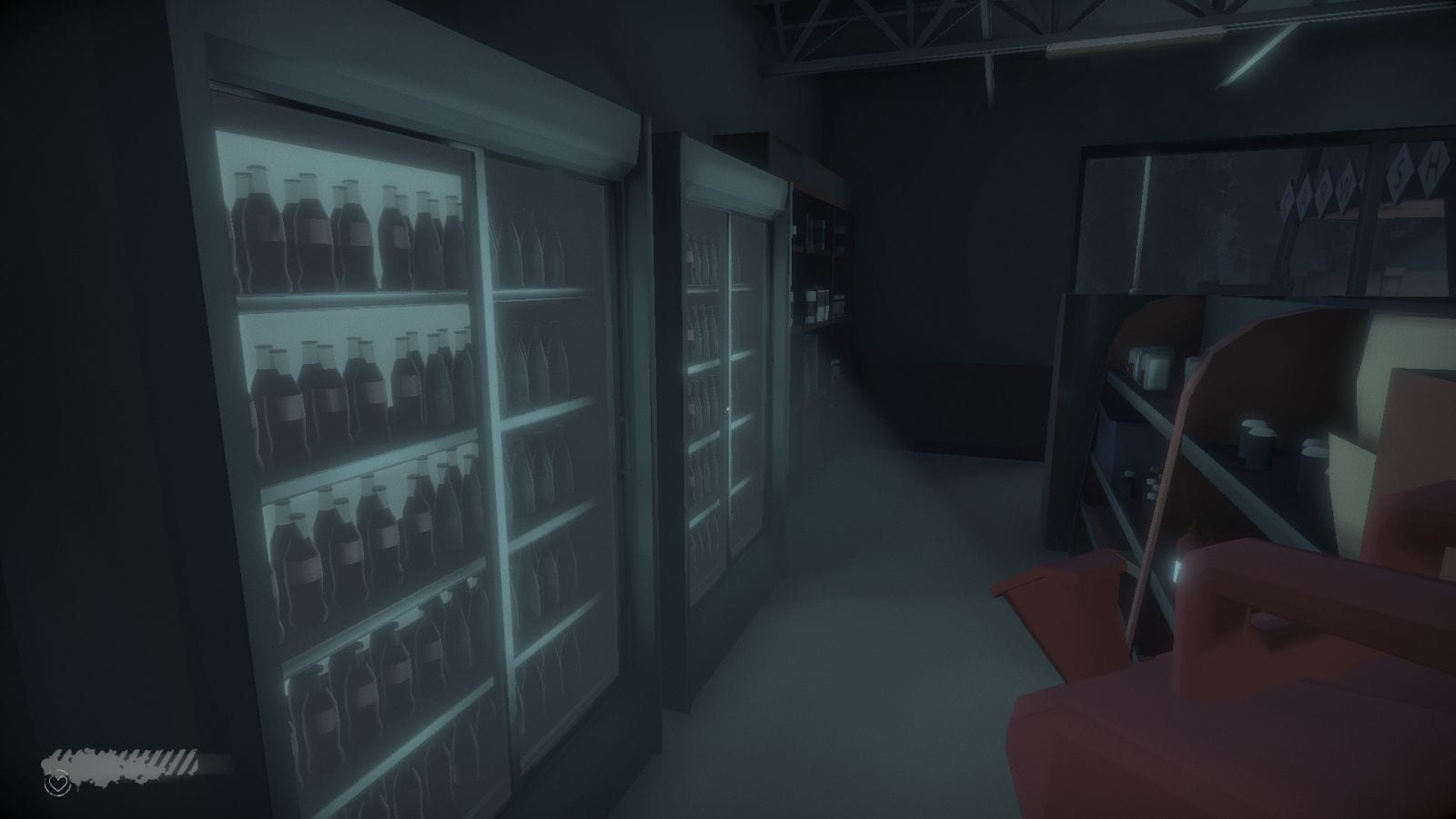 That’s what I call…a cold case.

This is the Zodiac Speaking switches between casual puzzle solving and stealthy sleuthing, held together by the thin thread of horror. At his home, Robert occupies himself with excessive scavenger hunts for miscellaneous things. During therapy, he scours large areas for clues while avoiding his mind’s manifestation of the Zodiac. But, for players looking to ease off the challenge, the game offers a story mode to remove the game’ stealth component.

In both the dreams and his home life, everything is a puzzle for Robert to solve. In his trusty journal is a checklist of all the items he needs to crack cases. The gameplay boils down to exploring the spaces provided by each dream in the search for various interactable clues and objects. After which, Robert unleashes his deluge of exposition and analysis before letting players wander around some more. Maps are littered with false affordances and difficult-to-spot interactables — a problem only exacerbated by the ever-increasing size of each subsequent dream space.

Maps are large, and only get larger, whereas clues are sparse. To complete a dream, the player must gather enough clues to produce four events. Then, the game throws players a bit of problem-solving as a reward, making players arrange the four events in chronological order. After which, a message appears somewhere on the map, often hinted by the cutscene that precedes it. Upon finding and interacting with the message, Robert finds himself back in the therapist’s office, ready to dive into another dream. 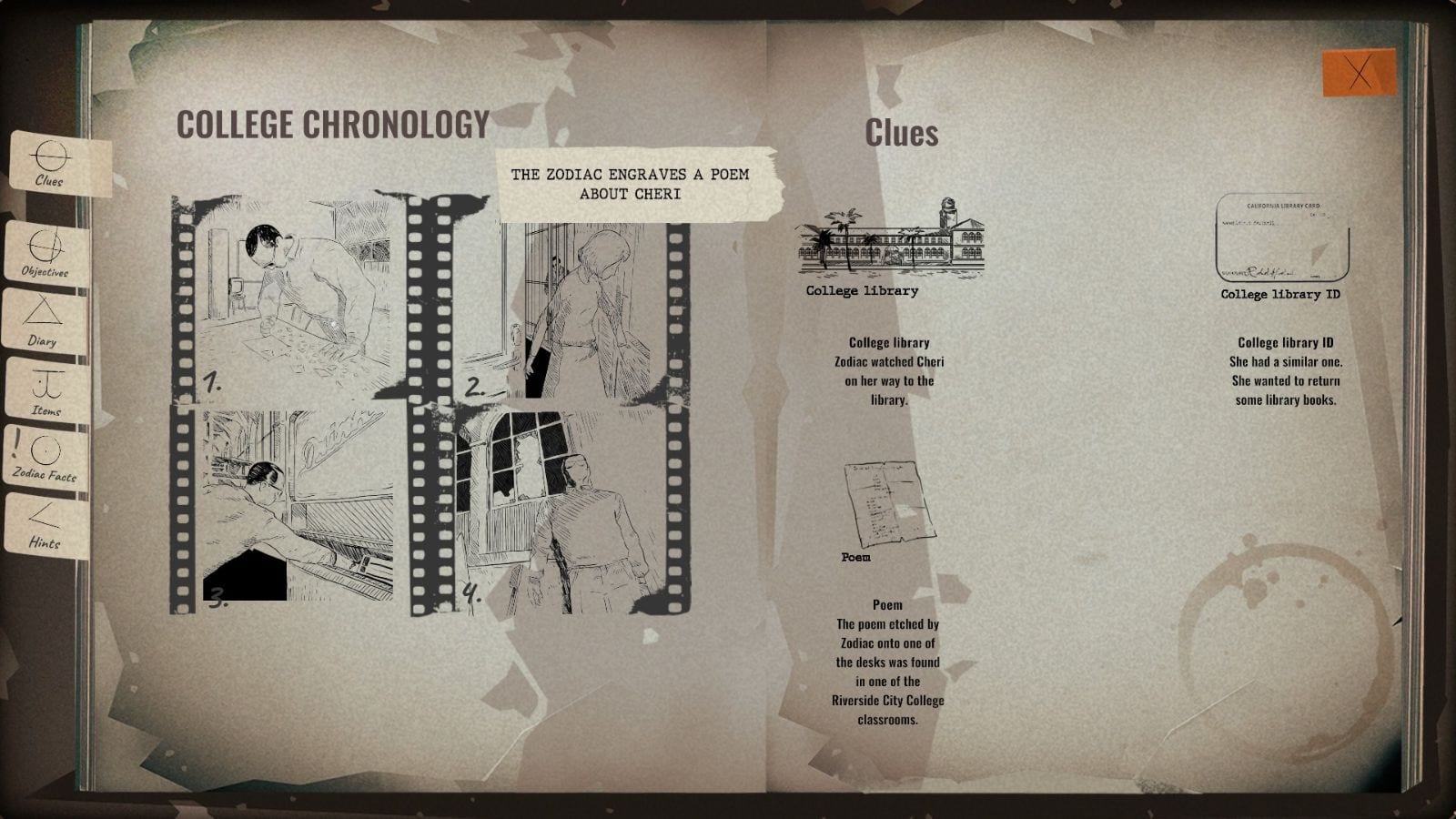 To spice up an otherwise mundane routine, the Zodiac roams every dream and chases down Robert upon detecting him. This is the Zodiac Speaking features barebones stealth, in which players can crouch behind objects to hide from his gaze, although detection is quite spotty and Robert may be spotted despite being “hidden.” Thanks to limited stamina, players only have a short window to find a serviceable hiding spot before the Zodiac finds them, guts them, and sends them back to the starting area.

As the hours pass, avoiding the Zodiac becomes harder and harder. Large maps are no obstacle for the masked murderer, as he can teleport to the player’s general area if they put too much distance between them. Because of this power of his, tracking the killer is unnecessarily difficult, and players will undoubtedly spend large chunks of time waiting and listening. All this only prolongs the mystery-solving process. Relatively large maps combined with a teleporting, aggressive killer means that hunting for these small clues is a chore and a half. This is especially true when I didn’t have the slightest idea where the clues were; story mode was starting to look more enticing. 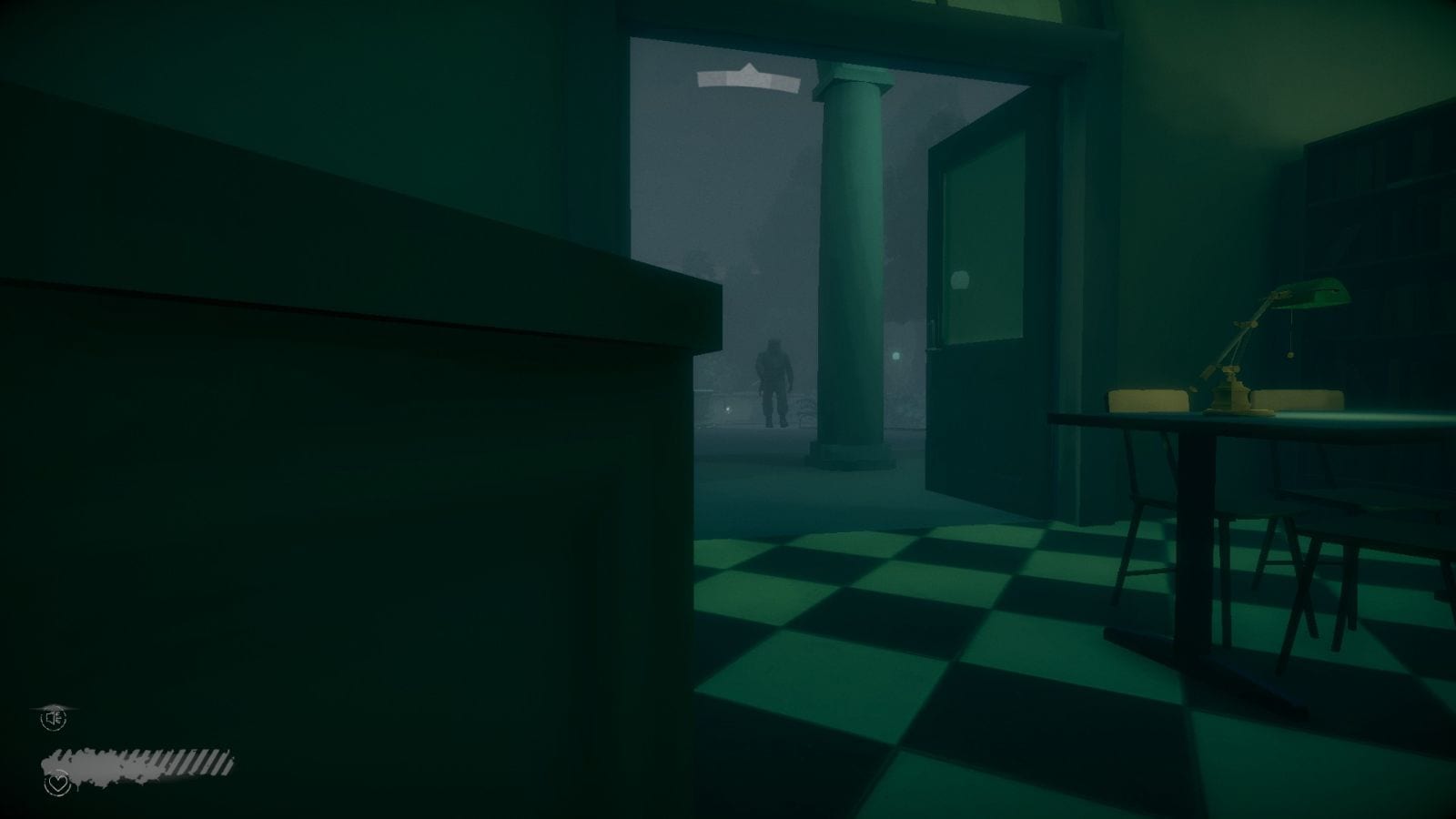 Without the killer, I can imagine playtime would be cut down by a half, if not more. Interested parties can expect 5-6 hours of gameplay, but potentially 2 in story mode. The killer’s behaviour remains stagnant throughout the game, and so its capacity for scares becomes completely overshadowed by its tendency to frustrate. In Robert’s home, however, players can enjoy mysteries with a more fitting map size and no distractions. Oddly enough, I found these quieter moments more engaging; greater focus lends itself to fostering that connection between me and Robert.

But eventually, not even his home is safe from the curse of the Zodiac. As the story progresses, the goal shifts from finding the elusive killer, to facing Robert’s personal demons. Unfortunately, the gameplay, immutable as it is, doesn’t do much to stimulate the player, failing to evoke those emotional responses the game so desperately wants them to feel. But, part of the blame falls on the writing — more importantly, the localization.

Though I can’t speak for the game’s writing in its original language of Polish, the English translations are awkward, full of grammatical errors, and loaded with inconsistencies. Letters will be littered with errors, and when in read mode, the same letters will have different errors. Subtitles don’t match up with the dialogue on occasion, and poor grammar, when voice acted, sounds even more jarring. These inconsistencies persist for most of the game, but it’s not uncommon to find pockets that are error-free. These issues unfortunately made it difficult for me to suspend my disbelief, taking me out of the narrative fairly frequently. Certain journal fonts and font sizes aren’t particularly gracious, either. 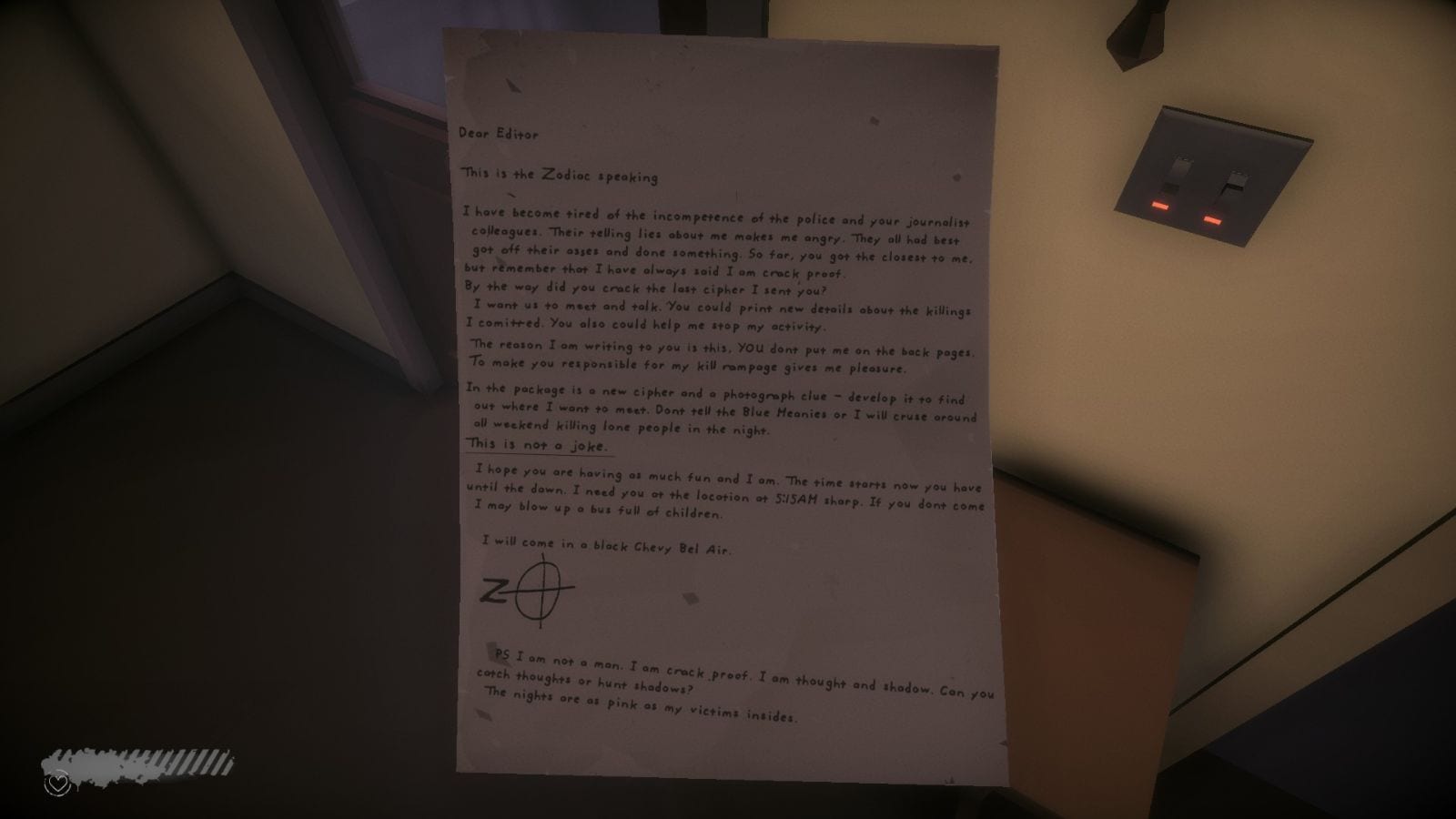 I’d assume it was on purpose if it didn’t happen so often.

The story itself is no cause for concern; the game tells a tried-and-true tale of a crime fighter down on his luck, battling both external and internal villains. But this isn’t the story of a hero taking out two foes in one fell swoop — it’s a deeply personal tale that doesn’t quite have the room to spread its wings inside of the structures built to tell it. This is the Zodiac Speaking represents a valiant attempt at a gritty psychological thriller, but ultimately falls flat on its face.

This is the Zodiac Speaking

A mediocre, meandering mystery game hiding under the mask of something greater. While it has a competent story to tell, it lacks the means to tell it in an engaging manner.

A self-deprecating, overly sarcastic pair of glasses that occasionally possesses a human host in order to partake in the delightful process of playing video games, then immediately complaining about them. When he is not playing games (a rare occurrence), he can be found either writing about things that no one cares about, or haunting the quiet streets of his Canadian suburb.
Related Articles: Indies, This is the Zodiac Speaking
Share
Tweet
Share
Submit